“Are you sure?” “I don’t think we should be here.” “This doesn’t look right.” “Well, do you think it looks right?” Oh, those words were spoken more than once today as our route took us along some “interesting” paths.

We pedalled out of Staithes, along the cobbled streets and then straight up a steep hill. Well, it had to happen. We went down steep to get in, so we were going to have to go up steep to get out. We were powering up, trying to avoid the slow wobbles and then a car came behind us. We pulled over to let it get past and then I saw Steve try to get going again. He tried to push the pedals and it just wasn’t happening. He gave up, got off and pushed. I put foot to pedal, determined to ride the rest of the way up, because it’s always easier than pushing, but as soon as I let go of the brakes so I could start going forward, the bike rolled backwards. I tried again. Put pressure on the pedal, ready to push off, eased off the brakes and…backwards. It was just too steep for a hill start. Sigh. Push.

Of course, we eventually made it to the top and rode on under grey skies, mizzle and encroaching fog once again. We were at least beside the road, rather than on it as we pedalled along, up more hills. The mizzle became drizzle and it was getting heavier so we stopped to put jackets on. With the fog rolling in again, I put on the high-vis jacket and then put my vest across the back of Steve’s bike for added visibility and we were off.

Our path ended and we were on the road. I was watching the map on my GPS that said we had a left turn coming up. All we had beside us were hawthorn hedges and bushes. We went past where we were supposed to turn and I was just thinking the GPS must have got it wrong when Steve did a u-turn in front of me.

“Not that track,” I said. All I had seen on the left was a narrow dirt track disappearing into the hedges. Surely that wasn’t our left turn.

We turned around and a closer look at this track told us getting up it was going to be a two person job on each bike. The track was straight up a steep bank. Steve left his bike on the ground, came back to me and took the front of my bike while I pushed from behind. Then a repeat of that to get Steve’s bike up. It was wet and slippery and I was on tip-toes trying to get traction on the steep bank, pushing the back as Steve pushed on the handlebars.

When we got the bikes up, all we could see of our path was a single track disappearing into the trees. We were on a single track road yesterday, a car width wide, now our single track was literally a track, not much more than a bike tyre wide.

I pedalled off into the scrub. One challenge was keeping balanced on the thin strip of dirt, the other challenge came in the form of stinging nettles and blackberries that swiped us from both sides. Honestly, the places that are called cycle routes! 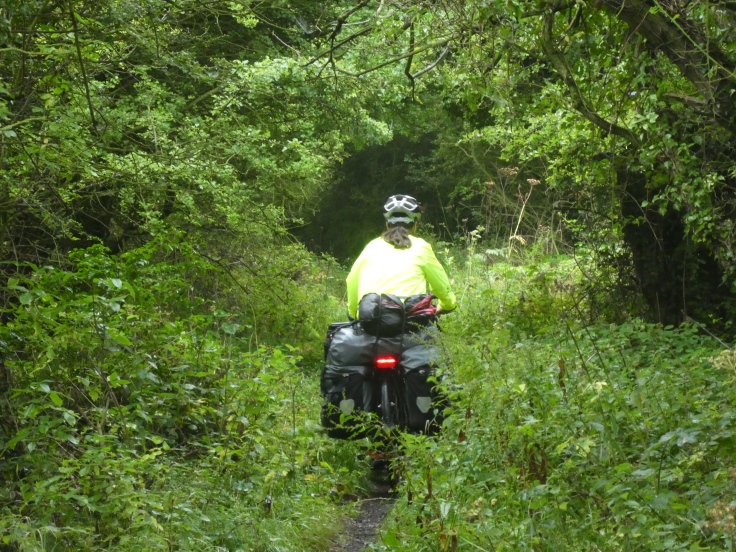 After some scratches and scrapes and stings, the path came out near a farm house and became a dirt farm road, that was at least wide and nettle free. It took us along some ups and downs, through gates, under arches and beside fields.

When we rode under the arch of a small bridge, Steve said, “We have to get up onto that bridge.” Sure enough, a left hand turn and up a steep gravel bank, through two gates and we were on top of the bridge.

I pedalled over and took a look at where the path was taking us. No. I don’t think so. I waited for Steve to catch up, pointed and said, “That can’t be right.”

“That. We’re not supposed to be there.”

“It’s where the path’s going.”

“Well, does it look right you?”

The path was now taking us straight into a sheep paddock, with the farm house and buildings just ahead. We’ve been through wheat fields and other places that haven’t felt right, but now we were opening a gate, riding into a field of sheep, straight towards a  farm. Would you feel like you were intruding and just ever so slightly trespassing? I sure did.

We bumped along the track, past sheep whose expressions could only say “what are you and what are you doing here?”  We came to the farm buildings, to be greeted by a very unhappy, very loud, very barky and snarly Border Collie. It propped itself in our path and barked and snarled and ran at us, then propped just before reaching us, barking and shouting at us. While it was doing that, a Labrador appeared with a wagging tail and very friendly face and came up to me for a pat. The Border Collie continued to bark and snarl.

“Good dog,” I said to the angry Collie, “good work. That’s your job. I know. You’re doing a good job.” All the while the Labrador is standing there, with its eyes closed contentedly enjoying its ear rub, as I tried to show its friend that I came in peace. Steve and I eased our way along, past the snarly dog, all the while cooing, “Good dog. Good work. Nicely done. Good job.” I was expecting a farmer to appear at any moment with a double barrelled something to tell us to scram toot sweet, but it was only the dogs that appeared. We made it past the farm buildings with ankles intact, waited until we were out of sight of the dogs before riding on, since a moving bike seems to send any dog into a snarling frenzy and we didn’t want to add to the Collie’s bad mood. We were eventually off the farm and back on a road. 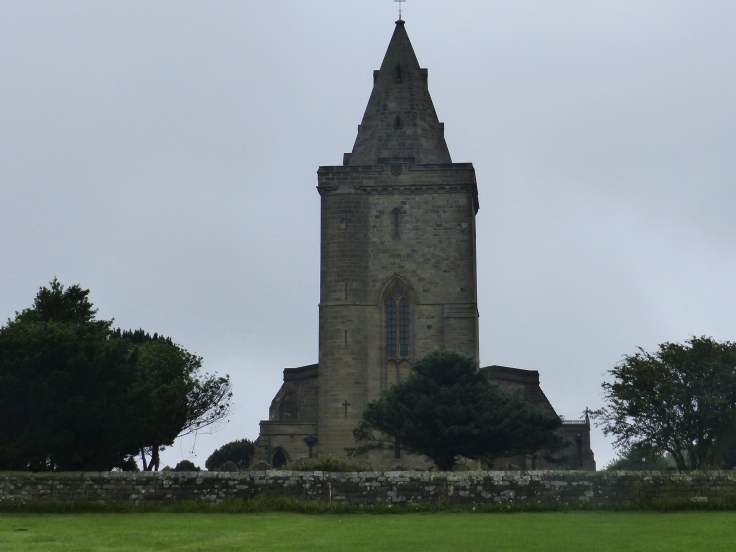 We were on a mixture of road and footpath beside a road, up and down hills until we came to the top of another hill. It had an 18% gradient sign, so we were in for another steep descent. At least we had a narrow path beside the road most of the way down and I pumped the brakes furiously trying to slow down, while not overheating them to the point they suffered yesterday. When we made it to the bottom we found ourselves in Sandsend. It was foggy and drizzly but still there were people on the beach. There are many things I love about the UK, but one of them is the indomitable spirit of the people, who get outside no mater the weather. The life guard was even on duty and the flags were out because you can be darn tootin’ sure, there would be people in swimming eventually.

We sat beside the beach, had elevenses, sorted ourselves some accommodation, so we had somewhere out of the wet to stay, before pedalling on. We planned a short ride today, so we had time to get some chores done, so we set off, for the final few kilometres into Whitby.

The fog hadn’t let up, but we were off the road again thankfully and then we passed Whitby Golf Club.

“Even you have to love that,” I said to Steve.

You could barely see the fairway, let alone the flag from the tee, yet there were people out playing golf. I wondered if there were special rules that let you off taking a penalty for a lost ball on days like today!

We arrived in Whitby, the pub we were staying at kindly looked after our bags, while we rode off to do laundry and get our jobs done, before eventually returning at check in time, having our post-ride cuppa and lunch and then off we went for a roam.

All I knew of Whitby was from watching episodes of Heartbeat and everyone seemed to go to Whitby for seaside outings. It seems that’s what people do in real life too, because the town was absolutely heaving with tourists and visitors. Even with the crowds, it was a lovely town. More cobbled streets, a nice harbour and gorgeous buildings.

We walked through the town and then made the climb up the 199 steps (I counted and can verify there are in fact 199!) to the renowned Whitby Abbey and St Mary’s Church. The church dates from 1100 and is actually older than the Abbey itself. Other sections were added in the 13th and 14th centuries.

The ruins are of the Abbey, built between the 13th and 15th centuries. In 1539, during Henry VIII’s Suppression of the Monasteries, the abbey was reduced to ruins and the monks dispersed. A wealthy family, the Cholmley’s became the owners in 1555 and one of their grand houses sits just outside the walls of the abbey.

From high up on the cliff top, there were fabulous views of the coast and town below and we strolled around, before making our way back down into the cobbled streets, gathered our supplies and that was our day.

We might be having to slog up some hills and all but plummet down some scary steep ones too, but it’s so worth it for the places we are seeing. Riding along the coast and then seeing lovely coastal villages and towns is just brilliant. Getting there though, sometimes takes us along paths that are just a bit…well…unusual! What will tomorrow bring? Where will that path take us? Could we make the news by unintentionally creating an extra-terrestrial crop circle in someone’s wheat field? I guess we just have to embrace the element of surprise!

Time in the saddle: 1 hour 43 minutes

Our route (and today’s pub signs): 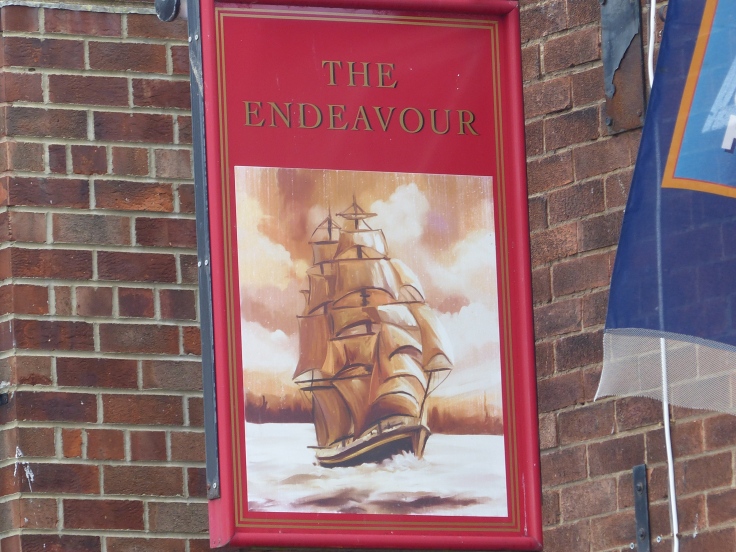 5 thoughts on “This Doesn’t Look Right”