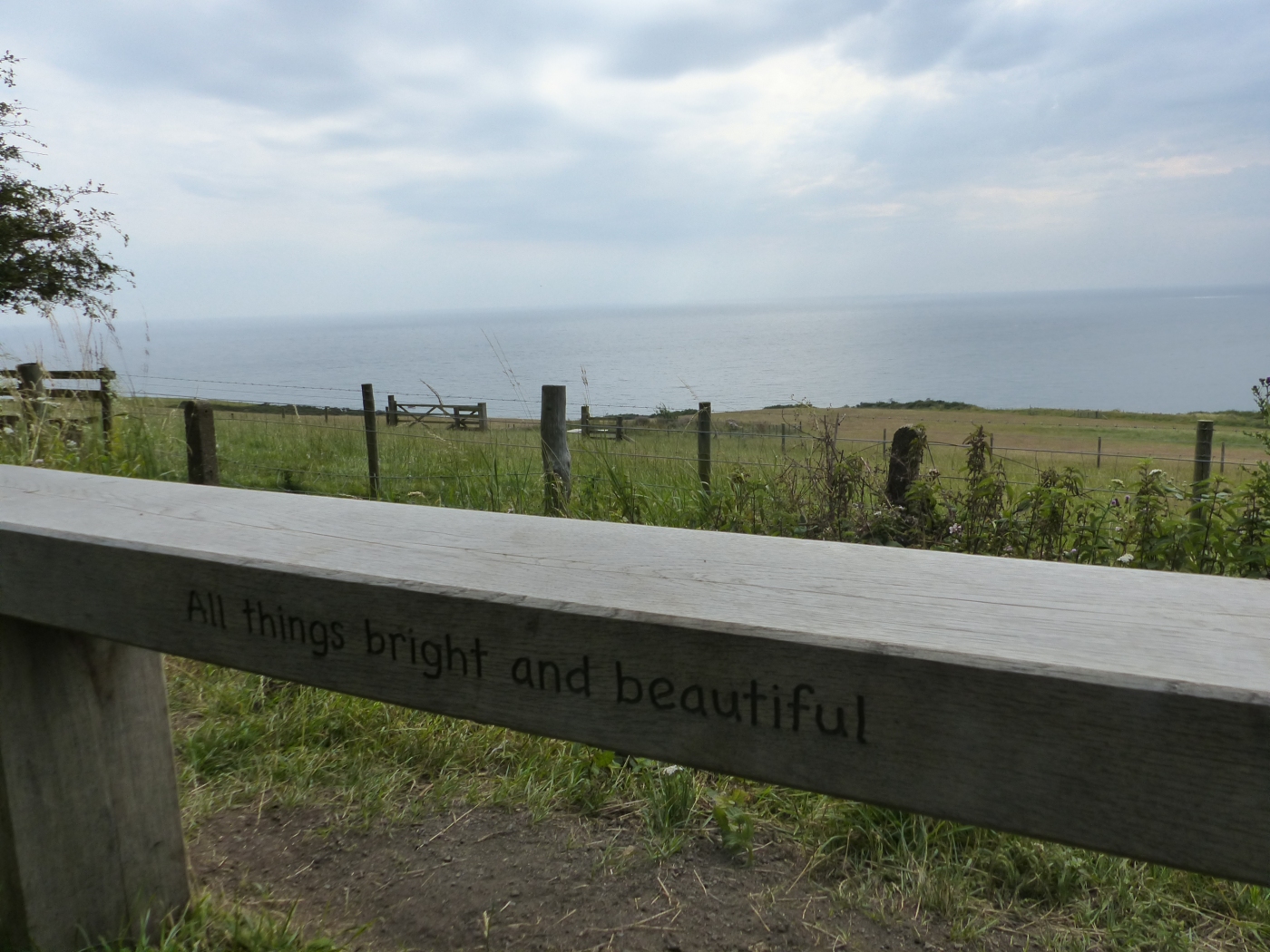 A morning with sunshine. You little bewdy! We pedalled down the cobbled streets and onto the Cinder Track. This is a path that follows the old Whitby to Scarborough railway line. When the original line was constructed it was laid on cinders, rather than the usual crushed stone and opened in 1885. It closed in 1965 and is now a path for walking, cycling and horse riding. It was a fantastic ride and all completely traffic free, apart from the occasional crossing of a road, which was brilliant. We set off through trees, balancing our way through some squelchy mud, passing walkers and other people on bikes. It was mild and muggy and fabulous. I started in sleeves and had to shed a layer pretty quickly, it was so nice and warm. 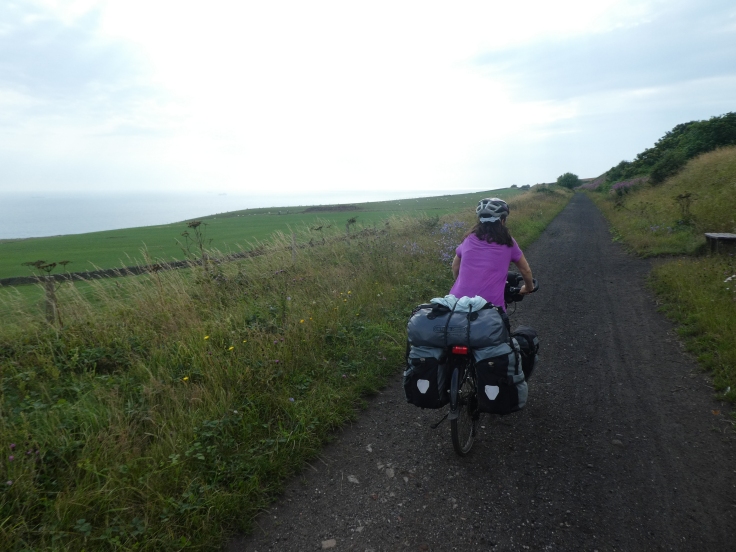 We passed another former railway station, now a visitors centre and it was another reminder of the importance rail once had and how many country stations there once were. A shame really that their decline and closures was so swift and widespread. 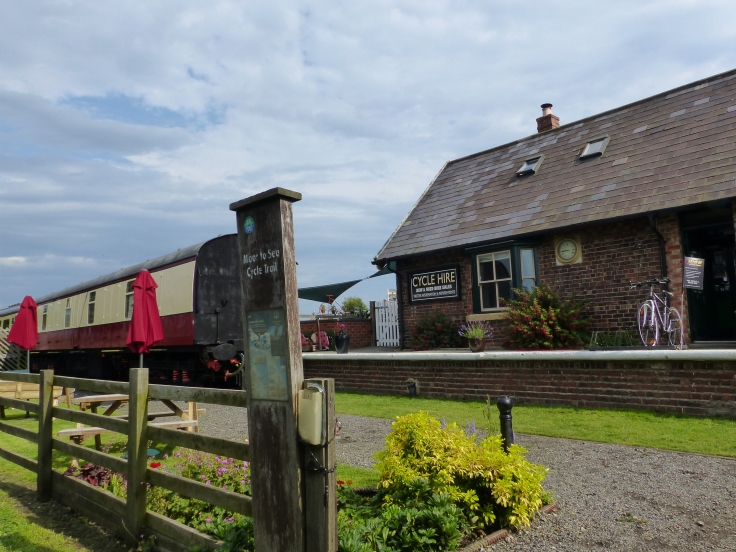 Then, on the side of the path we saw another example of wonderful British thoughtfulness. A table with an umbrella was set up and boxes offering homemade baking and some drinks, with a simple honesty tin for payment. There was a house up the bank beside the path, so we thought maybe the people from there had put it out, but I thought it was a lovely gesture to provide drinks and homemade snacks for passing walkers and riders at a small cost and just a tin, trusting that people would pay for anything they took. Lovely. 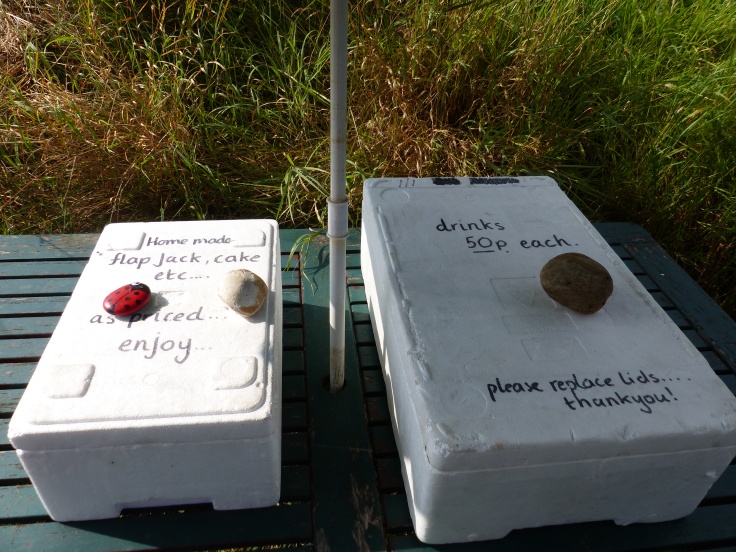 Unfortunately the sun didn’t last long and the grey clouds came over, the wind picked up and the layers went back on. Then it rained and the coats went on. The scenery was magic though. When this had been a railway line, it must have been a fantastic trip to take, with sweeping views of the ocean and farmland in between. At a much slower pace than those trips would have been, we could take it in, in slow motion and we had spectacular vistas all the way. When we weren’t riding through trees and under old railway arches, we were up high, looking down over fields and out over the water. It was glorious. 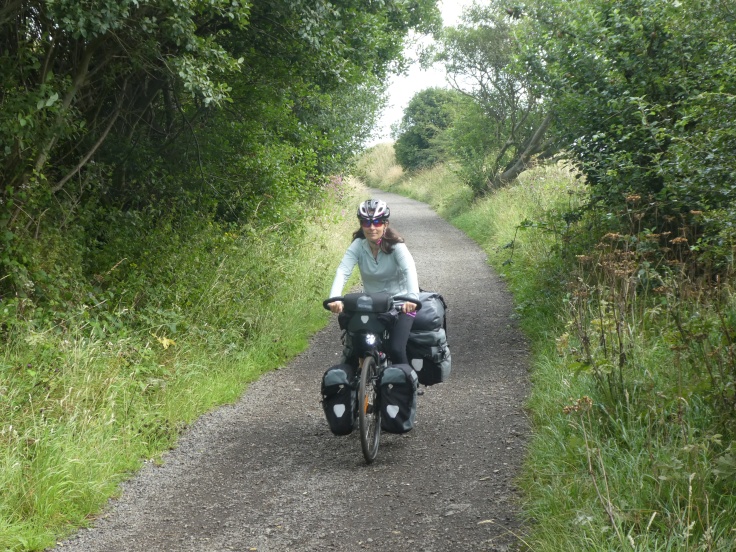 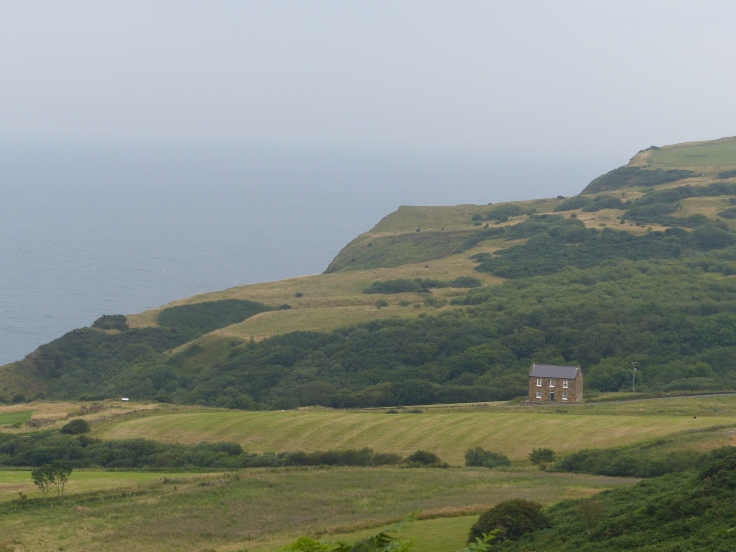 We saw a seat beside the path and stopped for elevenses with an amazing view out to sea and across to the headland. Then, who should ride past as we sat there, but the two German cyclists we had met up with at the boulders across the path on our ride from Durham. The same two. What are the chances!? We waved and said hello and it was one of the many greetings or short chats exchanged during the day, as we passed groups of ramblers or others pedalling along.

As we rode on, there was a reminder of what we were actually riding along. There in the path were the original sleepers from the railway line this once was. A lovely piece of history, still hanging on. 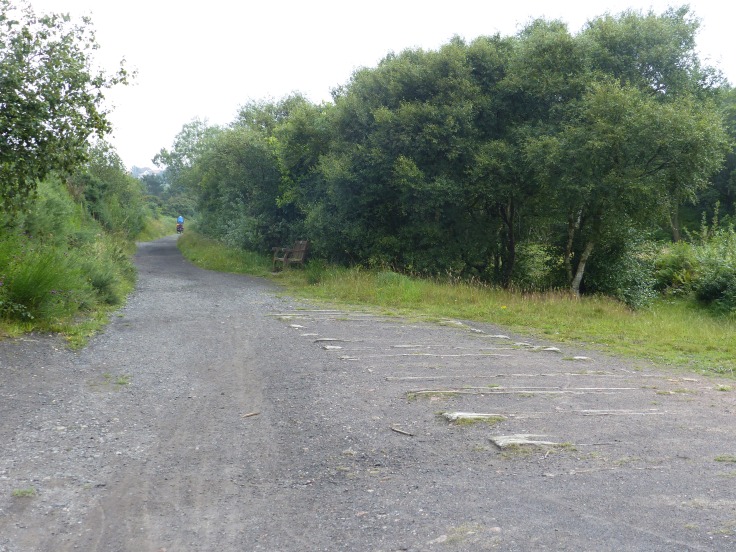 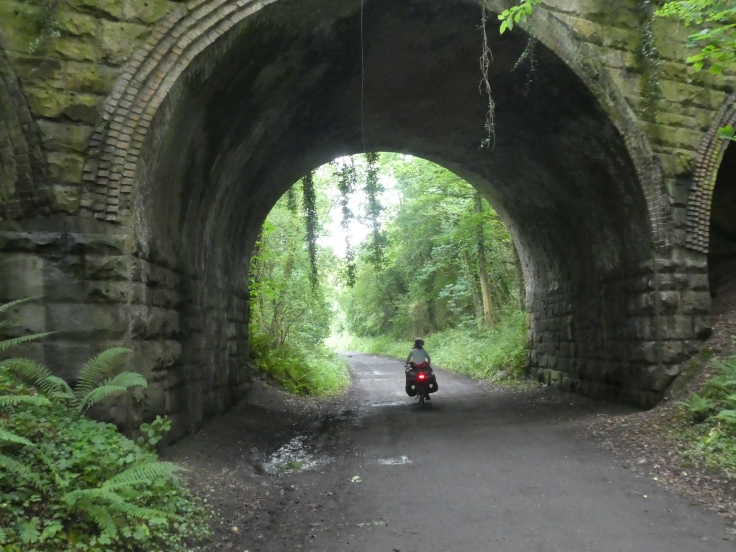 After doing some slipping and sliding in mud along the track, it soon changed into rocks. Quite big rocks. We bumped and rattled and bounced our way along.

“I’ve got one word,” called Steve, with the tone of the peeved.

“Maintenance!” he called. “They just don’t maintain the paths!”

“It does seem to be more in favour of ramblers,” I said.

We continued to bump along and then the path became thick gravel to plough through, then more rocks and added potholes.

“This is ridiculous!” cried the peeved pedaller.

It was a bit of a challenge, but I just took in the views as we bounced and bumped and wobbled along.

Then, as if in an effort to brighten the mood, the sun appeared again and the coats could come off. As soon as it peeked from behind the clouds, the temperature immediately rose and it was brilliant to be pedalling along, with the warmth from above, even if the path down below was throwing some tricks at us. It was certainly slow going on the track and I noticed that compared to our Netherlands time, we were taking twice as long to get anywhere. That didn’t matter though because we continued to have beautiful views on all sides. There were even butterflies a plenty and riding along, a veritable cloud of butterflies would appear from the grass and bushes around and fly in front of us and then flap away into the distance. Like I said…magical! 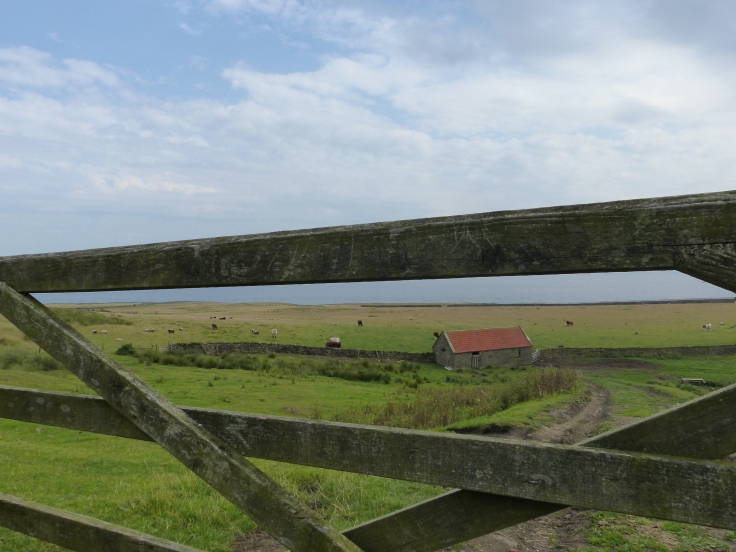 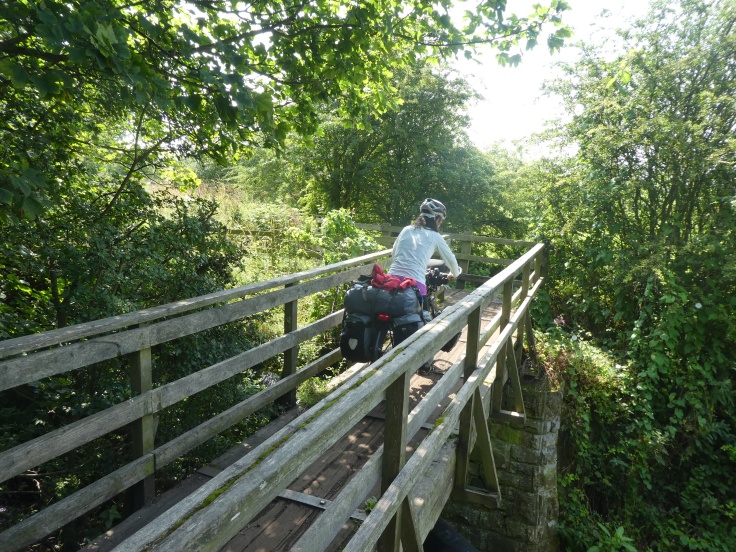 We spotted a table beside the path and with the sun shining and the wind dropping, we declared it a top spot to stop for lunch.

We reached the outskirts of Scarborough, the Cinder Track came to an end and we were on neighbourhood streets and then through parks. We still had a path to ride on, which was great because we were still off the road, but the path was so cracked and potholed and lumpy that it felt like we were on a dirt track.

“Maintenance!” I heard Steve call behind me. Obviously the peevishness had not passed!

We rode into our pitstop, had a post-ride cuppa and then headed out for a roam around another coastal town. Scarborough is the first town so far on this trip that is a return visit for us. We came to Scarborough very briefly on our last tour, but not on the bikes. We had hired a van for a couple of weeks, so we came to Scarborough on four wheels rather than two and it was on a freezing cold day with pouring rain, so we didn’t venture far from the shelter of the van and didn’t see much. So today, we had the polar opposite with beautiful sunshine, a clear blue sky, a ride in on two wheels and now time to see the town in all its summer sparkle.

We walked up the street so I could visit a British TV location and see the building that was the hospital in The Royal (the Heartbeat spin off). It’s actually residential flats, but it was instantly recognisable and I thought it very appropriate that there was even a period car parked out front. 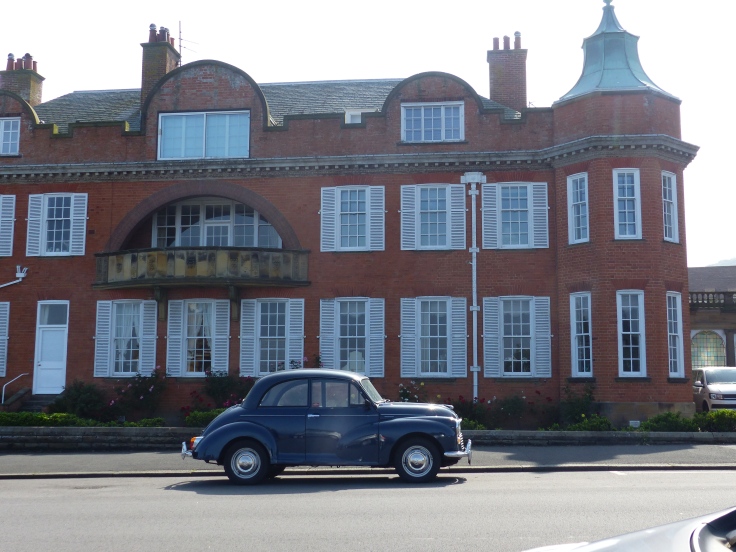 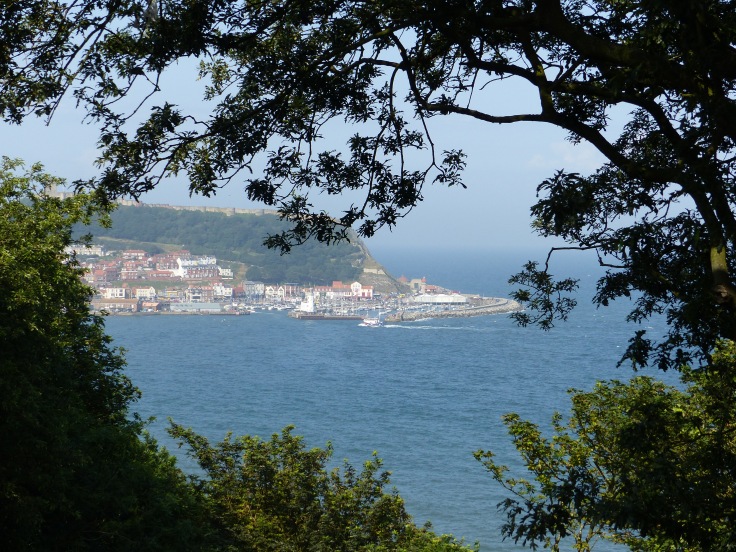 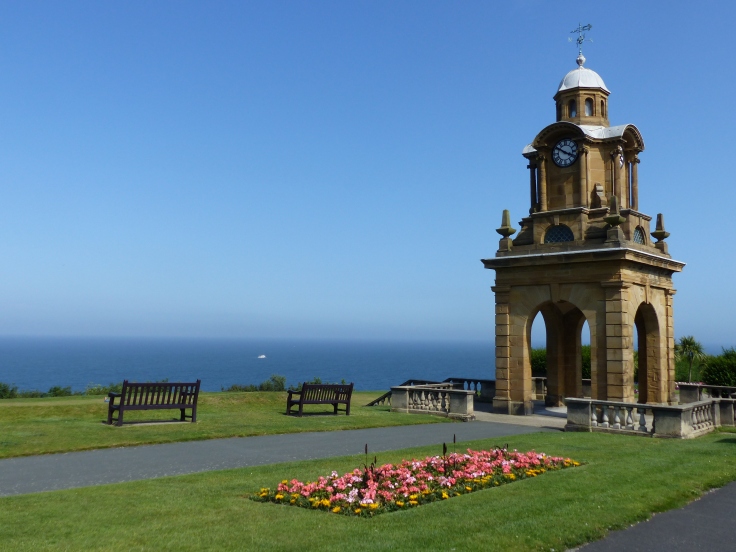 Our onward stroll took us through a park, where I saw my first British squirrel for the trip and then down to the waterfront, along the promenade towards the harbour. This is where it was absolutely packed with holiday makers enjoying the beach, building sandcastles, throwing balls, swimming and eating their body weight in ice cream. It was a classic seaside resort scene and it was great to see a truly warm and bright summer’s day being enjoyed by one and all at the seaside.

At the end of the promenade, Steve decided he had to do the classic thing and head into the arcade to “play the penny arcade”. He won too!

We climbed the 135 steps up into the town, gathered our supplies and called it a day. Scarborough certainly wasn’t one of the quaint seaside towns we’ve visited and was more brash than charming I guess, but still a nice place to visit again, to see it with its summer togs on.

It was another top day. Tops I tell you! A great path through trees and countryside atop the coastline with amazing views every which way. No traffic, just the passing parade of two wheelers, ramblers and dog walkers, all offering a smile and a greeting. The path was a little tricky, but a small price to pay to be away from traffic and amongst the wonders of nature. I loved it. I love this place! There is a smile on this dial with every pedal that turns! Pedal on!

Time in the saddle: 3 hours 16 minutes

Weather: sunny then grey then rain then sunny 20C

Our route: (and pub signs) 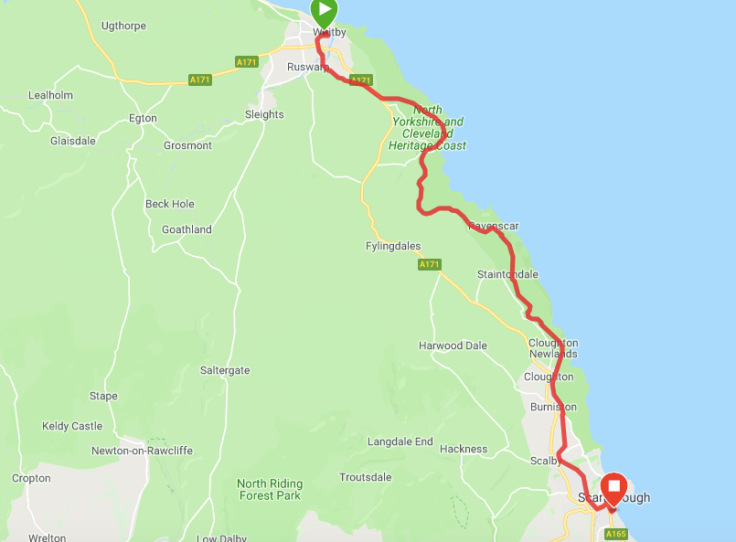 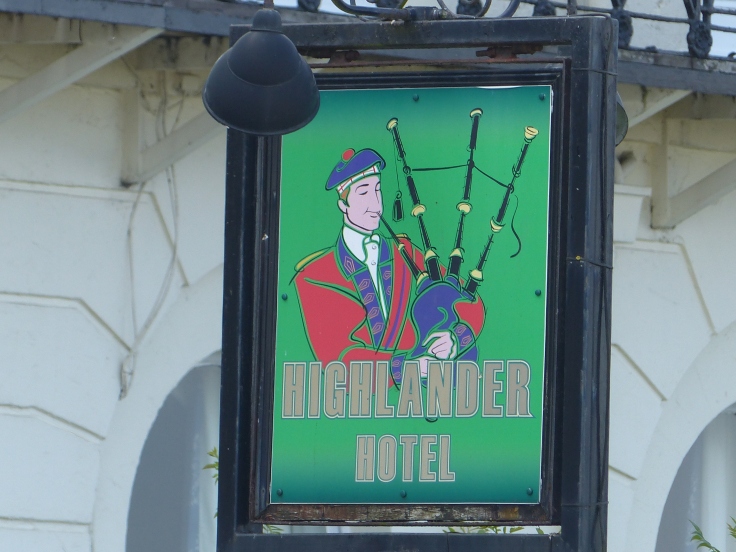 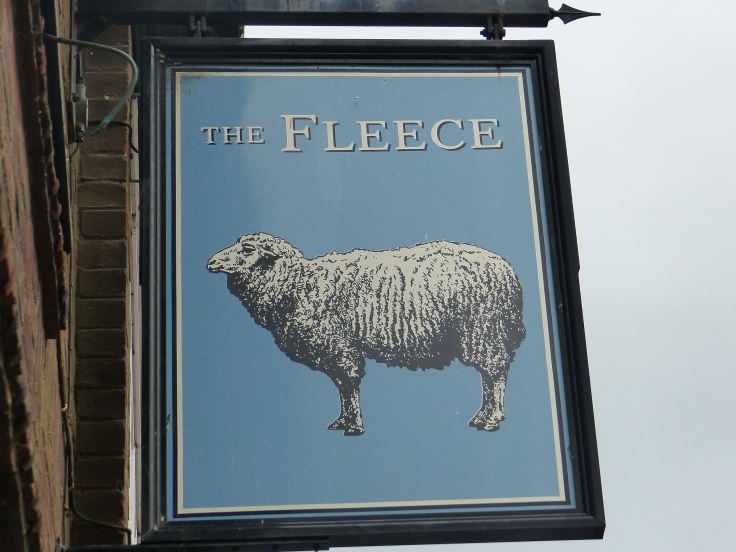 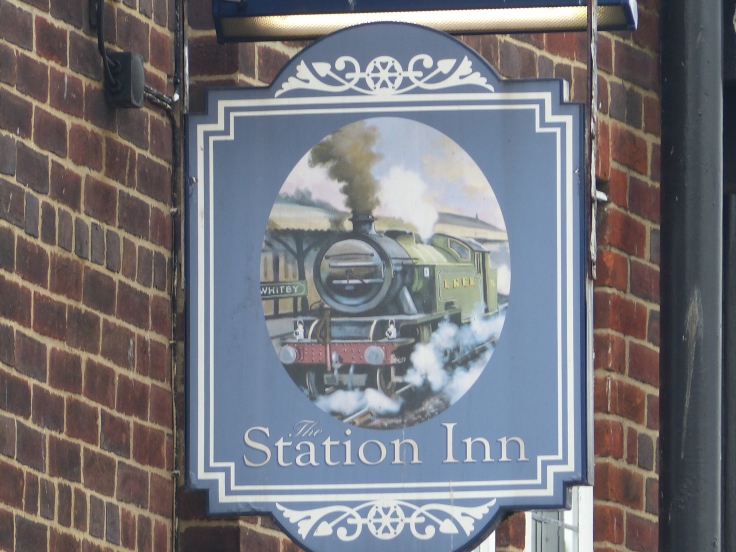