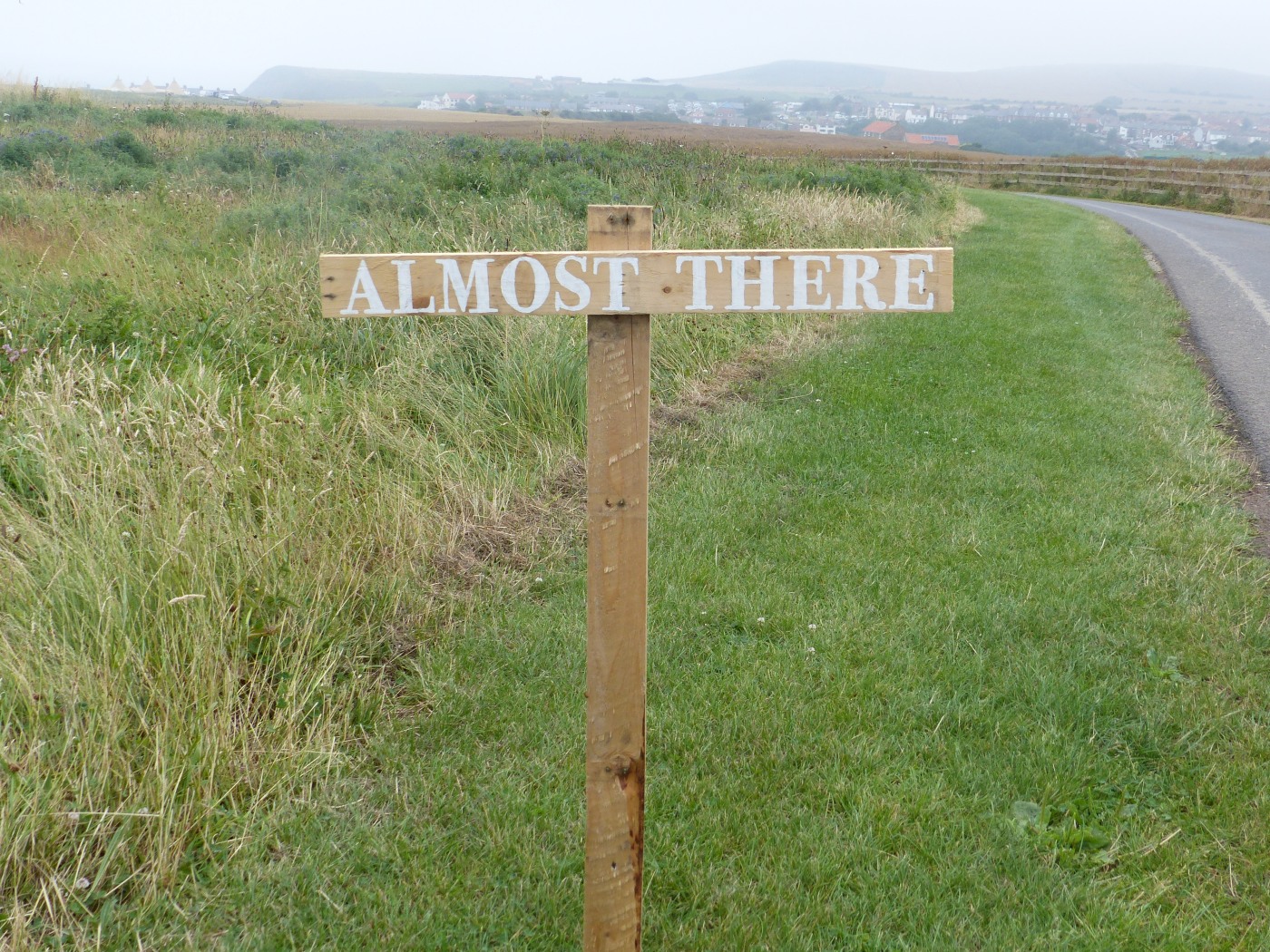 The very nice man at reception opened Room 1 for us and we retrieved the bikes.

“Thank you so much for this,” we said, “it’s so appreciated.”

“Naw problem at all,” he replied.

“I think that’s the most luxurious stay they’ve ever had,” I added.

This place had been very good to us and we were very grateful and the staff were about as nice and friendly and helpful as you could find.

We pedalled off under overcast skies, to begin our onward journey. Our route took us along the National Cycle Network again and we had the NCN signs along the way. It wasn’t long before we came across our first head shaking feature of the NCN and that was a flight of steps to get down. Yes, there were little ramps set into the steps to help get the bikes down but still, this is on a CYCLE route, surely there could be a better way than to take cyclists onto steps to navigate. This is by no means the most challenging feature we’ve faced on the NCN, we had some real doozies last time we were here, but these steps were our first little challenge of the day.

We rode through Stockton and then on past the scenes of the “industrial north” past the docks and then through Middlesbrough and through neighbourhoods that showed us the areas that seemed to be doing it tough in the North, with rundown areas and burnt out cars.

We made our way towards the coast and stopped in Redcar for elevenses. There was a triathlon happening and the cycle stage was in progress. This is when I had my first dose of the great British humour for today. We were walking the bikes along the street, looking for a place to cross the road without getting in the way of the competitors and an older couple walked past us. The lady looked to me and simply said, “Yer won’t win.” I laughed.

“What a shame we’re too late,” I said, sweeping my hands across our fat load on the bikes, “we could have given them a run for their money!”

As we walked along we had three different people stop and chat, asking about where we were going and what we were doing. I love the friendly, chatty people here.

We sat beside the beach for elevenses, watching the rest of the cyclists finishing their laps of the the town.

As we got ready to go, Steve said, “Now we start the hard part of the ride.”

The first 20k had been nice and flat and we knew from plotting our route, that from here on we’d have some hills. They were about to begin. 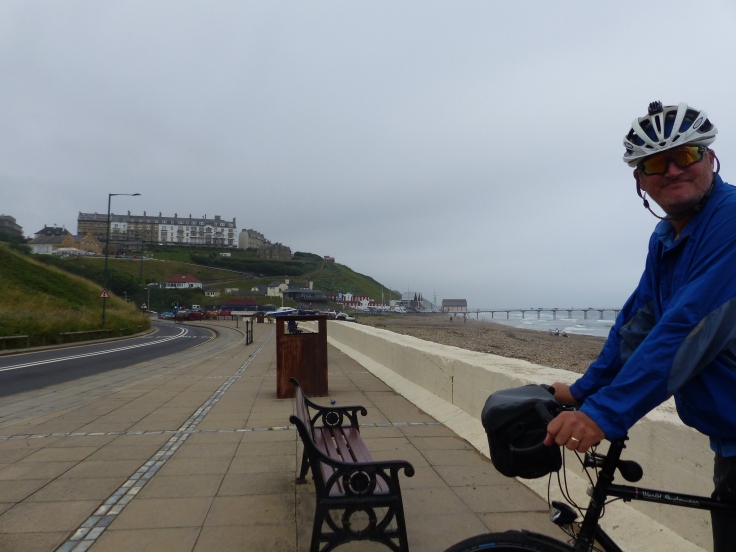 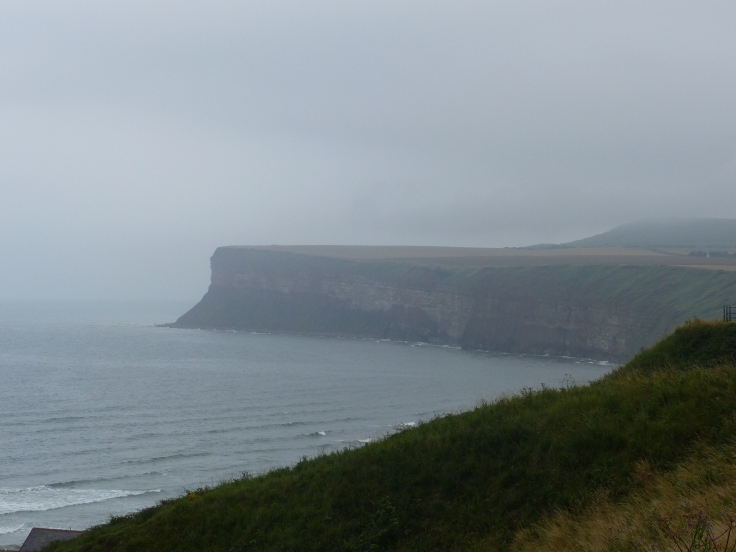 We didn’t have to wait long, as we made our way out of town, the first climb presented itself. Up we went, down went the gears and we slogged our way up. We continued on through countryside, on roads or beside roads, past fields and through neighbourhoods. 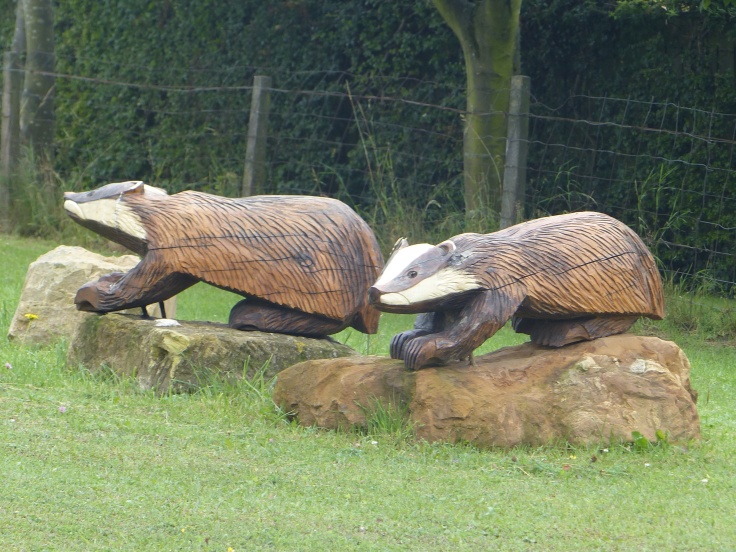 We came to another steep hill and there was a narrow path beside it, that passed through trees, before rejoining the road. We took to the path to get off the road and the plus was we were off the road, the downside was the path was even steeper than the road and, being under all those trees and in the shade, it was covered with a thin layer of moss. There were places, as we slogged up that hill, where our wheels just spun and slid and had no traction on the slippery, mossy surface. We kept powering up, rejoined the road, made it onto another footpath and continued our puff up. Both of us were in “granny gear”, as low as we could go and Steve was up out of the saddle for extra push to get up the incline. 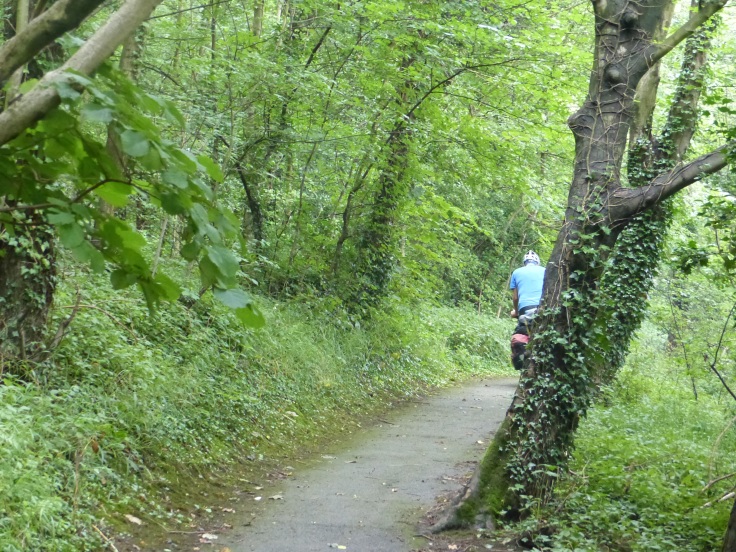 At the top, we had some flat, before the hills came again, along with some downhills. We would go down a 10% hill, only to have climb up a 14% hill on the other side. Then, at the top of another hill, we saw a small park on the side of the busy road in Loftus and stopped for a quick lunch.

The onward ride took us through a quiet neighbourhood and then out into the countryside on single track roads, meaning the road was only a single car width wide. We pedalled along and could see the sea mist beginning to roll in. Watching the scenery change and seeing that cloak of mist slowly envelope the countryside looked very speccy.

We passed fields and dry stone walls, farms and we had rolling hills around us. The rolling hills were in front of us too and we continued to slog up them. The mist really settled in and our visibility was down to a hundred metres and less in some places. It was a real pea souper and getting thicker.

It then occurred to me that, as cool as it was to be riding into the mist, I realised it was probably becoming slightly unsafe. I pulled over.

“We need to get visible,” I said to Steve, “cars just aren’t going to see us in this.” Steve had been riding ahead of me and I was finding it hard to see him, so we would be pretty invisible to cars travelling at speed along that single track road. I put on my high-vis vest and Steve put the Orange Wonder to work as an orange spec to be seen by cars from a distance and we continued on, hopefully a little more visible in what was becoming almost a white-out in the landscape.

Then, after all our slogging climbs, we came to a downhill. I went down in my usual cautious way and I soon discovered this was steeper than it looked. I usually pump the brakes on my way down a hill, careful not to hold them on and overheat them, but I couldn’t pump them, I was using all my strength just to hold them on. I could feel myself pitching forward and the mist had obviously left this hill looking deceptive in its incline because it was seriously steep. I held those brakes as hard as I could, battling the gravity that was trying to pull the bike down that slope. I squeezed those brakes as hard as I could and I couldn’t ease off at all, because it was taking everything to stop from careering down. Steve made it to the bottom ahead of me and when I caught up I said, “I was burning the brakes coming down there, it was steeper than I thought.”

“It was taking everything I had to hold the brakes on,” he said, “ I couldn’t have stopped even if I’d wanted to.”

Then Steve picked up one of his water bottles and squirted some water on his brakes…they hissed and sizzled and steam rose up from his wheel! He did the same to mine and squirted them with water. Hisssss….sizzzzzle…they went and a cloud of steam came off the disc brakes! Those brakes were hot! That hill was so steep, you could have fried an egg on those brakes, they’d worked so hard to hold us back from the force pulling us down! We stood there, laughing our heads off at the steam hissing off our front wheels. If anything is proof of how steep the hills were today, it’s red hot brakes you could have cracked an egg on!

Moment of amusement over, yet leaving us with a “how ridiculous were those steaming brakes” smile, we came to the top of another hill, looking down on our destination of Staithes.

The town was way down at the bottom of another steep hill. A sign said it had a gradient of 25%, so the brakes were in for another workout as we eased our way down, passing the many people who were walking up. An older couple walked towards us and the man said, “I ‘ope yerv got good brakes.”

“It’s riding back up that I’m worried about,” I said.

“If you ‘ave a good crack at the down’ill on this side, you can get oop t’oother side wee’out even peddlin’,” he said with a smile.

I laughed. “Yes, I can dream of Rotterdam,” I agreed.

Then another man and woman walked past us.

“We passed you earlier on,” he said.

“Oh, you probably passed us choofing up a hill,” I said.

I thought that was lovely, that they’d recognised us and stopped to chat. I was loving talking to people we passed and hearing the change from the Newcastle accent to a Yorkshire one.

We continued our careful descent of the steep hill. A man went passed us, “My, you have got some kit on there,” he commented.

Then a lady spoke to the little boy that was with her, “Oh, look at that big bike. In’t that good. You’ll have to get on yer bike again.”

We made it down the hill, then pushed the bikes up another short, steep, cobbled lane and made it to our pitstop, a very traditional English pub. We were given a top spot for the bikes in a shed at the back of the pub, settled into our attic room, had a post-ride cuppa and then went for a stroll around Staithes. It rained again, so we strolled around in the drizzle, but that didn’t matter one whit because Staithes was a wonderful place to roam. What an absolutely gorgeous town. It’s a little like Port Isaac (Portwenn in Doc Martin), with cobbled streets and lovely cottages perched on the steep hills overlooking the sea and town below, with rolling fields around. It’s definitely a fishing town and was once one of the biggest fishing ports in the north-east. It has that beautiful cosy feel, with steep cobbled streets and the sea on the doorstep. Absolutely gorgeous. It is certainly another of the gems we have stumbled upon and it has made all the hills well worth the effort.

Tomorrow we will ride on, continuing south to explore the Yorkshire coast. We know that “coast” equals hills, so I think we’re in for some more climbing for a while. The reward though, for the climbs to come, is the scenery you get at the top. We didn’t have much scenery today because it was shrouded in mist, but that in itself looked pretty amazing. As for hills, well… for starters, we have to get out of Staithes! That’s going to take quite a climb back up!

I will finish off with a new collection. On our last tour here, I began collecting British pub signs and thought I’d continue that hobby this time around. So down below, I shall leave you with today’s collection.

Time in the saddle: 3 hours 44 minutes

Weather: grey, if there’s such a thing as cool but muggy, it was that, then very, very misty, then drizzly but not cold 17C