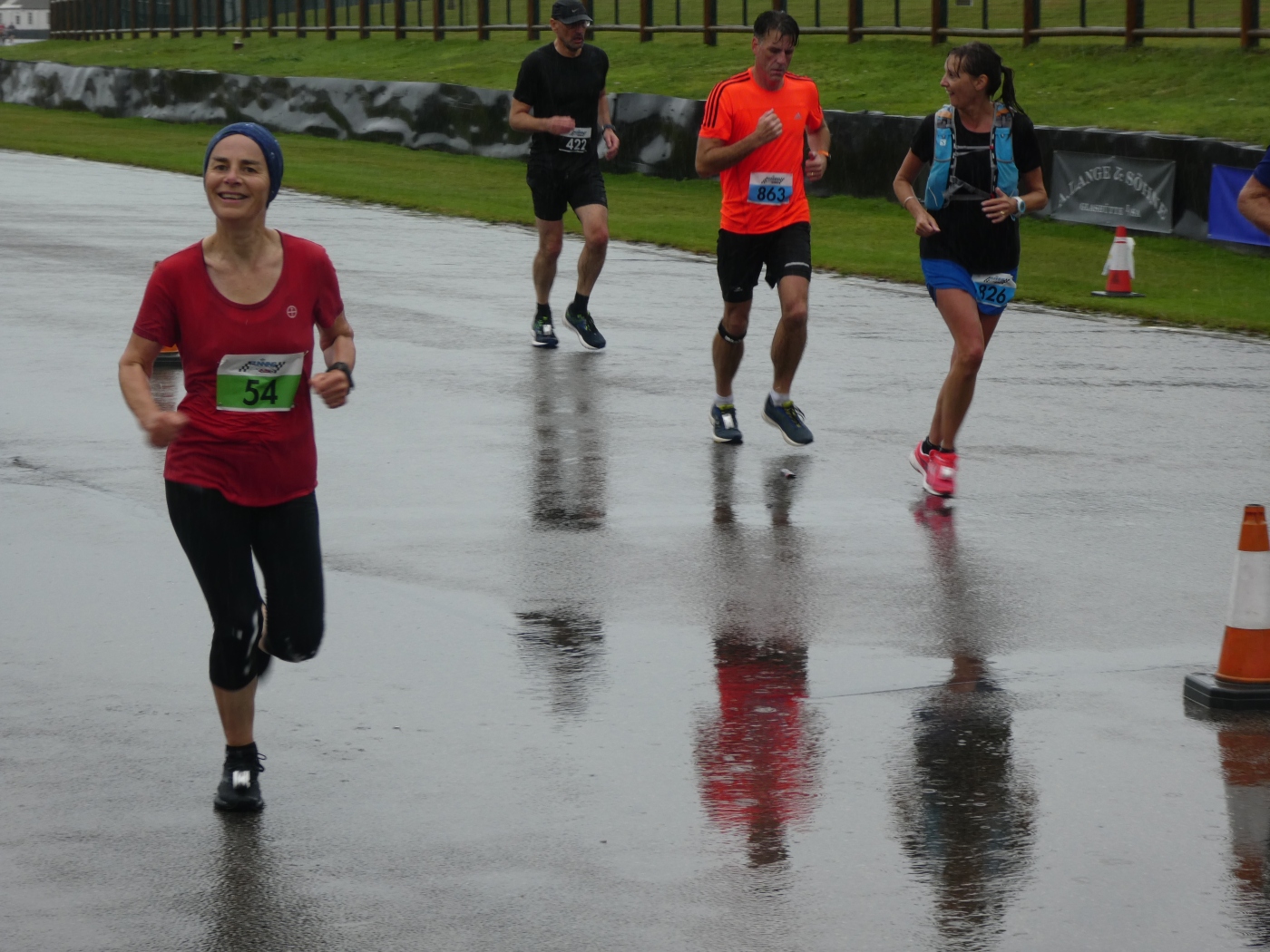 There wasn’t any Formula 1 action today but I did spend some time on a motor racing circuit…doing laps…in the pouring rain…without slicks. Fun!

It really was a Go Slow Sunday because we didn’t do much at all, so this will be a very brief report on the day’s doings. I found there was a 10K run at the Goodwood Motor Circuit, so since we were going to be in the general area, I thought I might as well do it because it would at least give me somewhere to run. Since we weren’t staying where we had expected to stay, we made our way out to Goodwood, first on a train to Chichester and then we rode from there out to the track. We pedalled in, just as the marathon was starting and it was perfect for it, not too warm, no wind, cloud but no rain. The marathoners had to do eleven laps of the circuit. Eleven! Monster! Running a marathon is a battle of mind over body at the best of times, but eleven laps around and around and around the same place, that’s an epic battle of mind over monotony. A round of applause to them. There was also a 20 mile, half marathon and 5K being run,  all on the track together by the end.

We waited and watched the runners go past, and then it was time for me to hit the track. It was also the time that…the clouds decided to dump, big time! The rain came down and it absolutely pelted, right when we were standing at the start line, waiting to go. Off we went, for two laps of the circuit plus a bit, and it was a complete drenching. The puddles were lakes and the wind got up, so it was a headwind into driving rain up one side of the track. But…it was great fun!  I even made a pillock of myself “driving” down the home straight for a few steps. I considered doing some donuts at the end, but drew the line there, deciding one level of pillock-like behaviour was quite enough.

Goodwood is a famous circuit apparently, being the only classic circuit in the world remaining in its original form. It opened to the public in 1948 and hosted Britain’s first post-war motor race meeting at a permanent venue. By the second lap the rain had eased a bit, it was just a matter of splashing through all the puddles and then squelching over the finish line. Well, that was a bit of Sunday fun! A memorable place to run and a memorable soggy trot around the circuit. I did feel for those doing the 42.2 km though, because they had to stay wet and puddling for a whole lot longer. 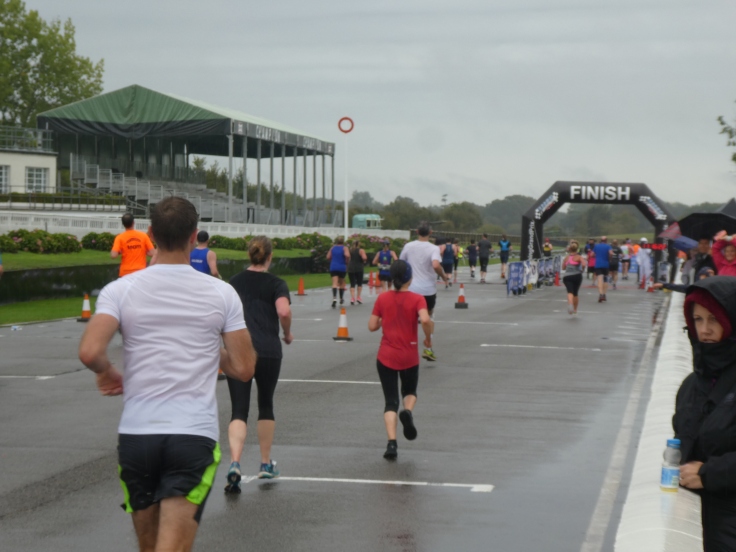 We hopped on the bikes, pedalled back into Chichester, hopped on the train and back to freshen up and into dry clothes and then we hit the pedals again to ride off to a pub for our Sunday tradition. A few kilometres down the road, thankfully without the rain now, we sat ourselves down and had another “Pub Sunday” lunch, before pedalling back. 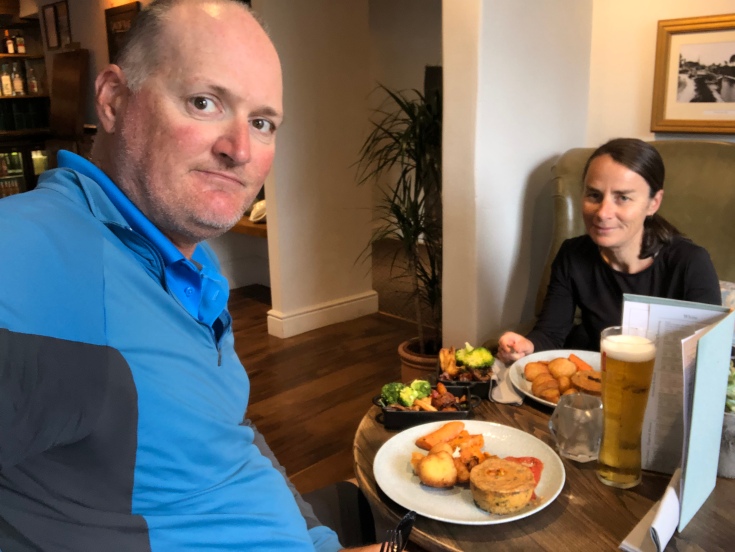 Riding back through the village of Prinsted, I took some time to look around and there really are some gorgeous, olde worlde houses, sitting on either side of the quaint little lanes. 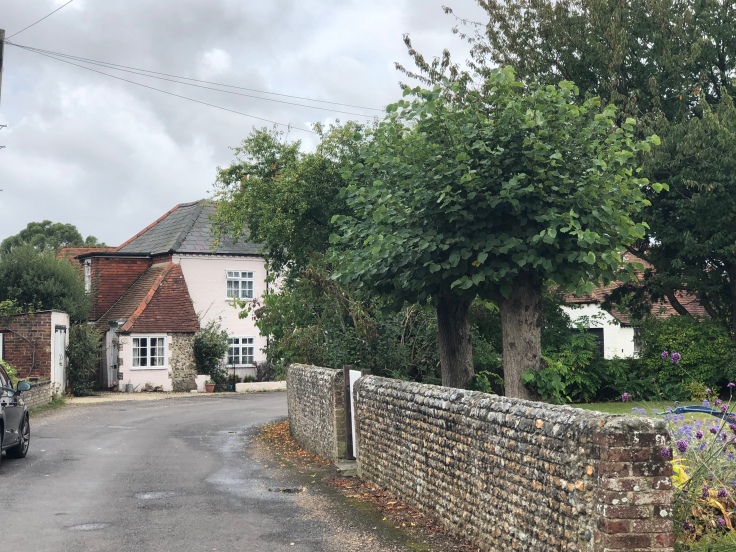 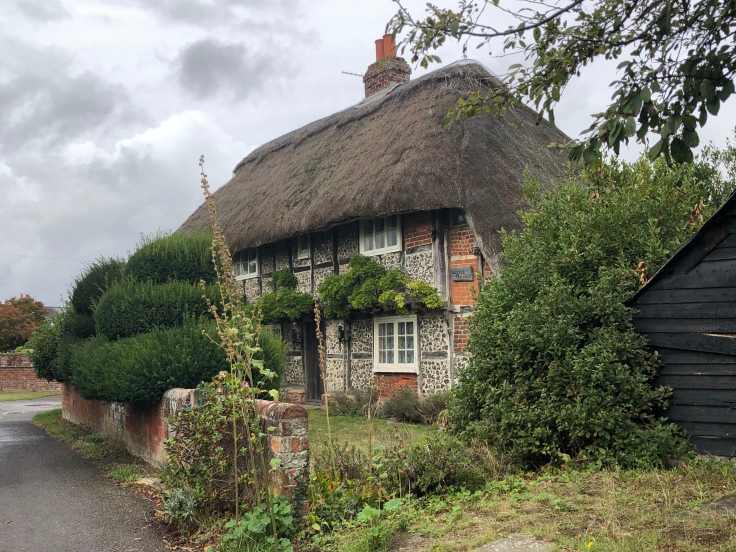 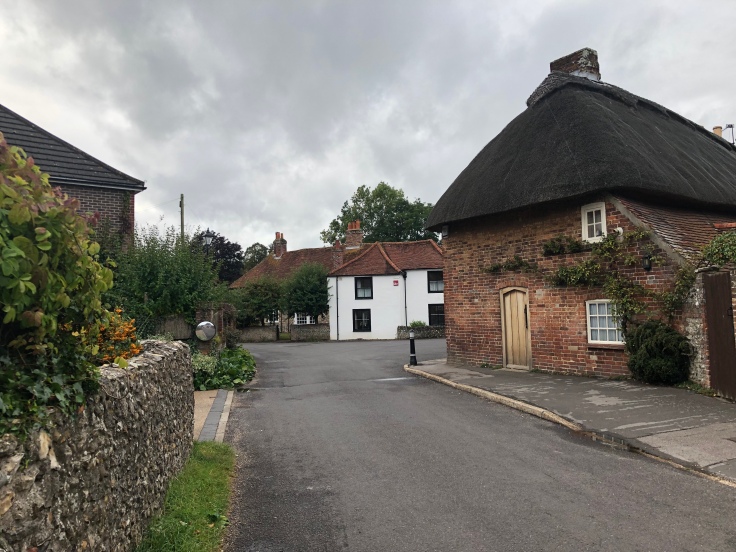 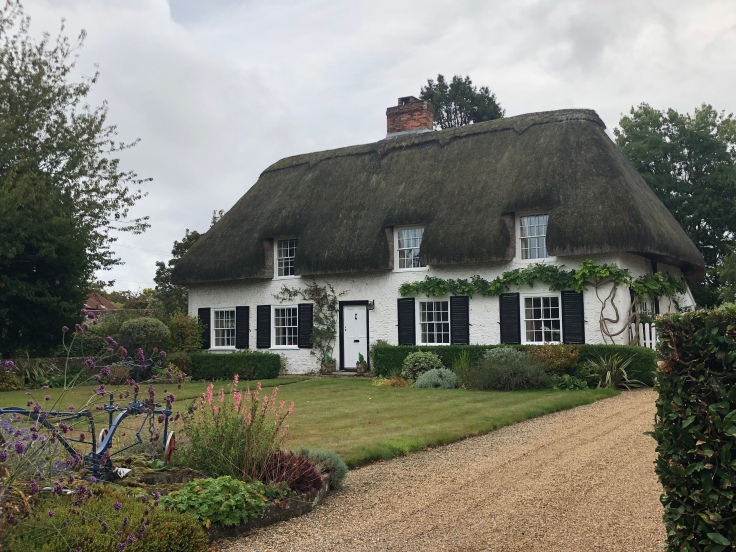 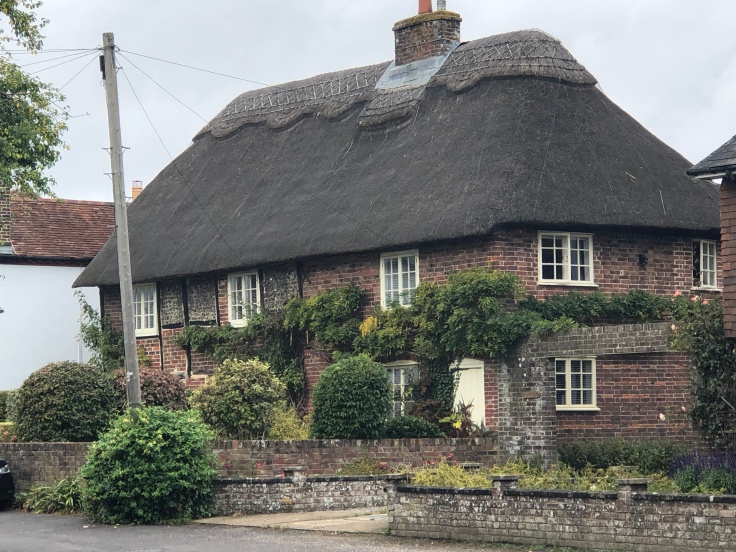 So, that was the day. Getting to Goodowood, squelching around the track and making our way back again took half the day, so when we got back from “Pub Sunday” it was time to settle in and get ourselves organised for the remainder of our time. With just over a week left, we have reluctantly realised it’s time to say goodbye to travelling by bike. We have to give ourselves time to do the rounds of bike shops to find some bike boxes that we can pack the bikes into for the flight home. We also need time to give them a thorough clean, since Australia’s customs and quarantine get quite snippy about anything coming onto our island continent with dirt on it, in case it’s harbouring some sort of noxious seeds or unwanted matter that will run rampant and upset our own Aussie ecosystems, which is fair enough. So we need to clean them top to bottom and in the nooks and crannies. Then we have to partly pull them apart to pack them up in their boxes. With all that to do, it’s time to get back in a van, so we can pick up boxes which, unsurprisingly, we can’t carry with us if we’re travelling on the bikes. Hopefully we can still get in some more rides in between, before we do find boxes and the bikes have to be pulled apart, it just won’t be loaded and travelling on our trusty steeds anymore. It’s a sign that things are coming to an end. Sigh. But…the end is not yet here, so on we go, even if it’s motoring on with a bit of pedalling until we find some boxes and our bikes make them their home for a while. Until then though…the adventure continues! We will make it so!

Time in the saddle: 39 minutes

Our route (to Goodwood):