Guess where we were today? Can you guess? Well, we were back on the Isle of Wight! Why? Because that’s the sort of fly-by-the-seat-of-your-pants travellers we are who go here and there on a whim. When we left the Isle of Wight a week or so ago there were still some parts of the island we would like to have seen, such as Ryde and Bembridge, the town that is almost Steve’s namesake, one letter removed. Since we were in Portsmouth, we discovered there was a fast catamaran service from Portsmouth to Ryde so we thought, why not, let’s have a day trip back to the island. So we did.

We walked through Gunwharf Quay to the ferry terminal and hopped on board for the short, 20 minute, not-actually-very-fast-at-all catamaran trip across the Solent. There was a fair wind blowing today so it was a fun, slow, rocking and rolling ride across the waves. Arriving at Ryde pier, we had another lengthy walk.

“This is longer than Hythe pier,” Steve commented and yes, as it turned out it was. Ryde pier is the second longest one in Britain at 681 metres.

We hopped on the Number 8 bus and rode the hills and narrow lanes out to Bembridge, then a walk through the village and along another narrow lane and we came to Bembridge Windmill. 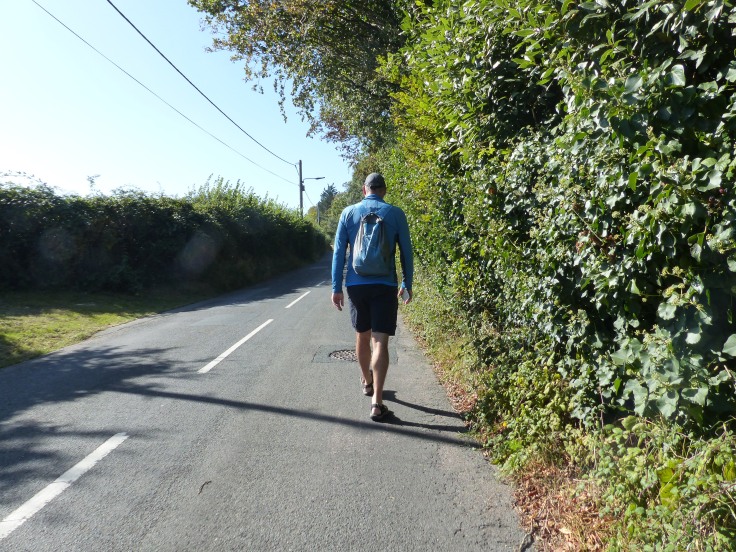 This is the last windmill on the Isle of Wight and was built in the 1700’s. It was then used continuously until the 1890’s, grinding flour, bran and cattle feed. During the Second World War it was taken over by the army and Home Guard and used as an HQ and an observation post.

We had a look inside, climbing  the very steep, very narrow ladder-like steps up three levels and realised it would have been very handy to be a short miller because everything inside was very low and we could only guess at the number of knocks to the head the poor ol’ millers suffered over the years.

Back into the village, walking along lanes and back through the village streets, before parking ourselves for a late elevenses in a park,  then we were back on the bus and back to Ryde. 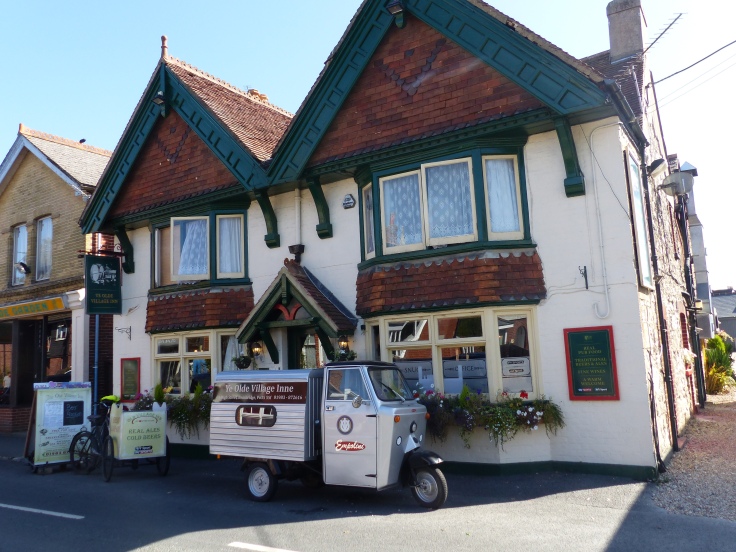 We walked along the Esplanade and the wind was fairly howling, with white caps on the waves and a chill breeze off the water. We stopped in another park for lunch, in a nice sheltered spot in the sun and immediately a posse of swans made a beeline across the lake, moored themselves at the edge, in front of us and gave us the stare down.

We strolled back along the Esplanade and the wind had brought out the kite surfers. It was a perfect day for them. I tell you, that scene of a sandy beach, blue sky, kite surfers and yachts could have been Australia.

“That’s as good as any Australian beach,” I said to Steve. British beaches get a bad rap because a lot of them are pebbles, but this one was sand and that long stretch of golden, sandy beach, against blue sky and clear water was just like a picture of home!

We walked up to Appley Tower, a coastal folly built in 1875 and also discovered, from a plaque beside the tower, that the ship HMS Sirius had sailed from just offshore, as the principal naval consort for the First Fleet, that set sail to “colonise” Australia.

It might have been windy but it was still a lovely sunny day so we walked back to the bus station and hopped on the Number 9 to take us out to Quarr Abbey, where we thought we could have a stroll around the grounds. Off the bus and a walk up the long drive and we discovered there are both the remains of the medieval abbey and the more recently built one too. The medieval one was built in 1132, by a group of monks from Normandy and was dissolved by Henry VIII in 1536. 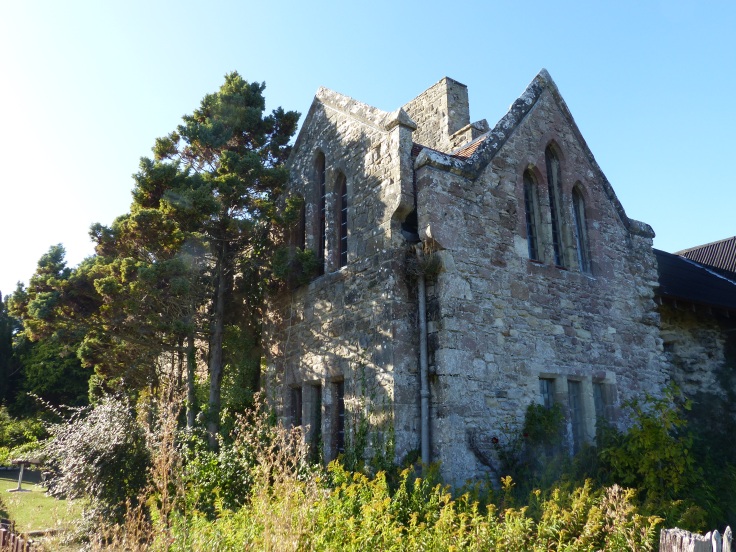 The newer Quarr Abbey was built in three stages between 1907-1914 and is still home to a community of Benedictine monks. 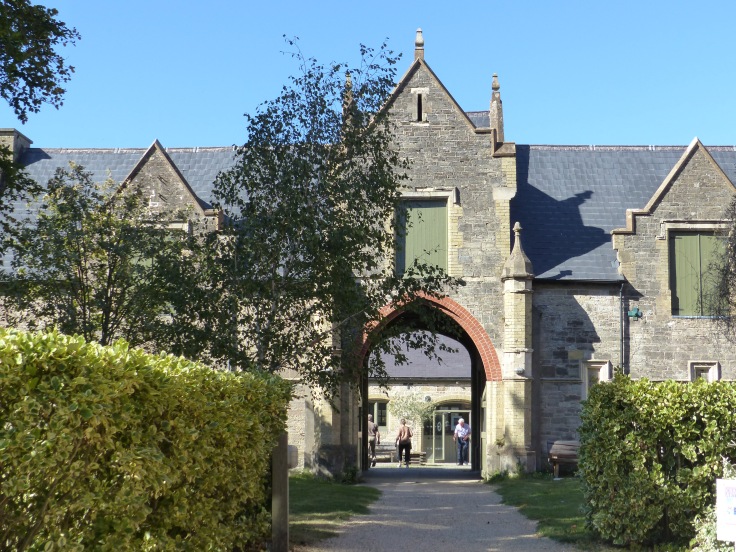 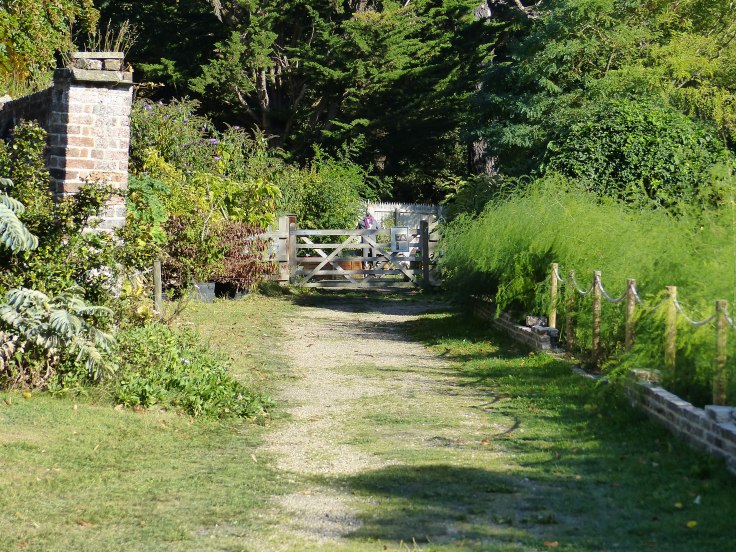 After a walk around, we had a cuppa in the tea garden where we were joined by a very vocal little robin who sang to us the whole time, then hopped down and joined us at the table before returning to the trees to sing another song. It was splendid, sitting outside in a garden in the sun, with a robin redbreast sitting in the tree beside us chirruping away.

We strolled back along the “woodland walk”, stopping at a wildlife observation hide, still hoping to catch a glimpse of the elusive red squirrel, but still no luck. It was lovely, strolling through the trees with the sun filtering through the leaves. 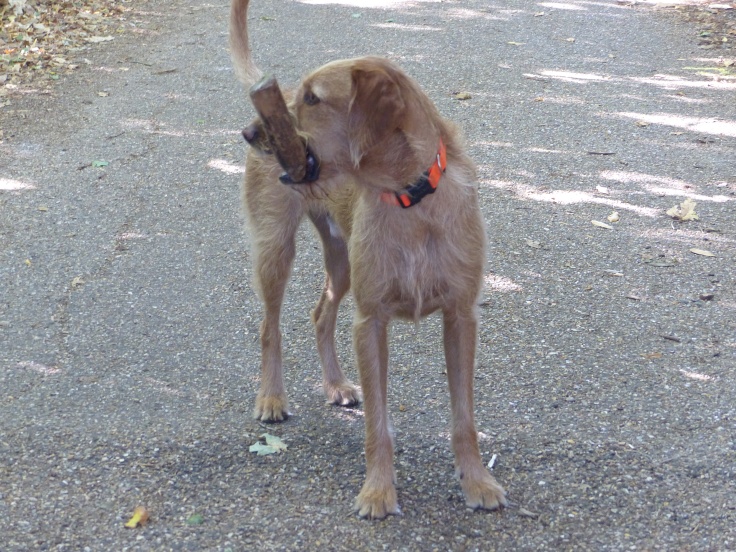 Back on the bus and back to Ryde. As we walked towards the pier we spotted the ferry on its way over, so we put on the sprints and ran the pier like it was an Olympic track. That was a sight in itself because you don’t often see Steve run. He made it about two thirds of the way before running out of puff, so we stopped for a recovery walk and then I said, “Let’s run four lamp posts, you can do four.” So we took off again, running the length of four light poles. “Now walk for one,” I said. After a short breather walking to the next light, I said, “Now another four!” We took off again, running along the wooden planks. So with that, we interval-ran our way along the pier, running the length of four poles, walking for one and repeat! We finished with a power walk into the terminal and made it with a couple of minutes to spare before the line started boarding. Perfect timing! The ride back was even more rolling that the one over and the wind and waves pushed that big cat side to side while it motored forward across the river. We put feet on dry land and despite the very rolling journey, we made it back to Portsmouth without sharing Kermit’s complexion.

It was a lovely outing, to see a little more of the Isle of Wight while we had the chance. We love that we have the flexibility to just change plans or go somewhere on the spur of the moment. After yesterday’s three ferry day, it turned out we added another one today. Just because we could! I think we’ll stick to dry land tomorrow when we hit the pedals again, but we’ll be hoping that if we leave the water behind us, we’ll be leaving the wind behind us too. Or, if we don’t and it stays with us, that it will at least be behind us at our back. Hmmmm, what are the chances of that!?