It was a ferry day today for sure. We caught not one, not two, but three ferries as we chugged across rivers, in the sunshine, on a leisurely, unhurried day of pedalling.

We rode into the quiet morning streets of Hythe, then I performed the morning  routine task of going to the supermarket to collect our elevenses and lunch supplies, being the team member in charge of anything supermarket, then we walked the bikes to the pier.

To get out of Hythe we needed to catch the ferry across the river to Southampton and to get to the ferry we had to walk along Hythe pier, which is one of the ten longest piers in the British Isles, at 640 metres long. There is even a little electric train that travels back and forth along it, carrying passengers to and from the ferry and it holds the claim to fame of being the world’s oldest  electric pier train. As we began our walk to the the end, three men on bikes were walking towards us, having just disembarked from the ferry. They stopped to ask Steve to take a photo of them together then asked about us and our trip.

“How do you manage up the hills?” asked one, looking at our load.

“Where have you been?” We gave them a rundown of the countries we’d travelled through and where we’d been.

“You’ve come how far! How many kilometres!?” they exclaimed as we told them. “Six months!” they added again in disbelief.

We are very, very lucky to be doing what we’re doing and I don’t forget that for a second, but I don’t think the actual riding we’re doing in even a tiny bit impressive. It’s just hopping on a bike and going for a ride every day.

The men stayed and chatted and quizzed us about what we use for navigation and a little more about where we’ve been and where we’re from and they told us they were on a four day ride. Before we left they asked if they could take our photo! So we posed for a snap! They were a great start to our day, friendly and chatty and great value.

We hopped on the ferry and enjoyed a leisurely cruise down the River Itchen, arriving in Southampton. From there we had some heavy traffic riding for a while to get out of the city centre, but then we had a great traffic-free path beside the water.

As we rode through Netley we passed a nice park, with seats looking out over the water, so we took the opportunity, when we had such a nice spot to sit and enjoyed a slightly early elevenses, looking across the river and watching the various dogs tearing around the park, full of the joys of life.

When we pedalled on, we found ourselves riding through Queen Victoria Country Park and what an interesting place that was. We rode past a garden with a terrific sculpture that had been created from a 140 year old cedar tree that had died and needed to be felled. An information board said they didn’t want to lose the memory of such a magnificent tree, so they hired a sculptor to create something from it and the result was this castle and dragon.

On through the park, riding along an avenue of trees and we saw the site where the former Royal Victoria Military Hospital once stood, which was built to house 1,000 beds. Prince Albert was closely involved in its design and at the time, the architecture was considered so significant and grand that wealthy members of the public would visit just for guided tours. It was so huge, it took 30,000,000 bricks to build it. The hospital is no longer there, but its chapel is still standing, with its  46 metre high tower.  With this being part of the original building, the size of the space around it gives some idea of how big the hospital would have been and the footprint it would have had. In 1944, control of the hospital was handed over to the Americans in preparation for the D-Day landings. The post office was also housed in one of the offices in the hospital. It must have been enormous and functioned as both a medical facility and so much more.

We learned the military cemetery was not far from the old hospital site, containing Commonwealth War Graves, so we pedalled along there to have look as well. The cemetery had headstones for British, Canadian, New Zealand, Belgian and Australian soldiers. One of the things I found really interesting was the fact that German POW’s are also buried in this cemetery and they were there, in amongst all the others. So, even then, while the war was still raging, there must have been some recognition that those men were doing what all the other soldiers were doing and deserved a respectful burial, so they weren’t buried separately, or in a different plot. Their headstones stand side by side other British, Canadian or Australian ones and there were even some German headstones that simply said, “Ein Deutscher Soldat” – “A German Soldier”, so even unknown German soldiers were buried in this military cemetery alongside their battlefield foes. 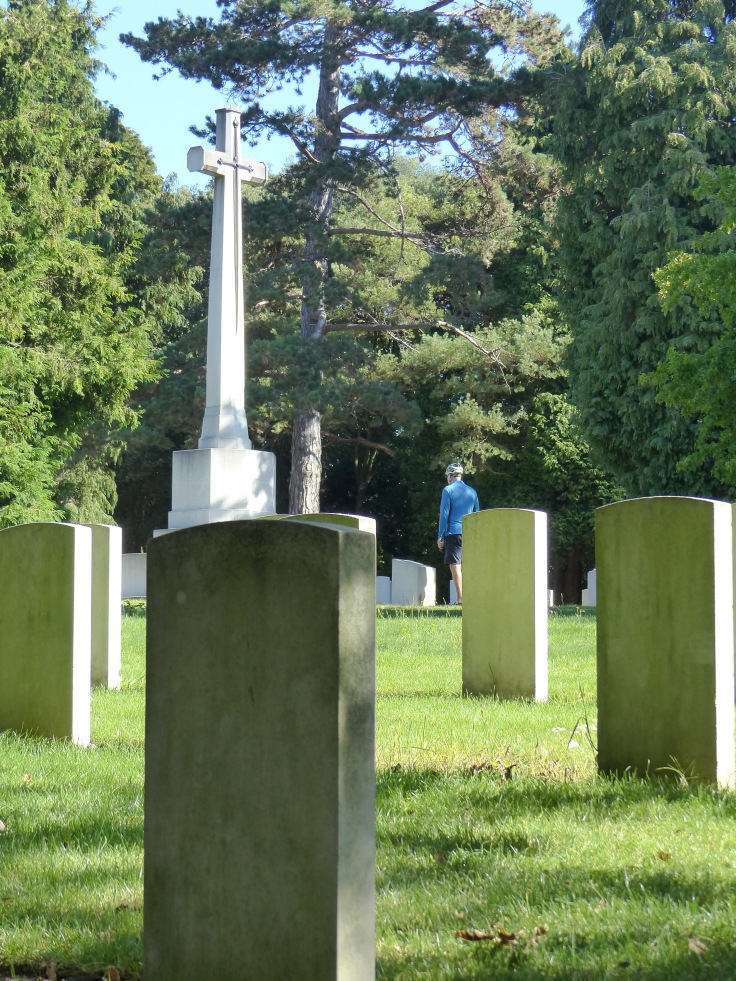 We pedalled on and came to the little village of Hamble-le-Rice, another quaint little spot beside the water.

“That’s an impressive load,” said a man as he cycled past us with a smile.

Hamble-le-Rice is where we caught ferry number two, to take us across the River Hamble to Warsash. This was the best ferry of all, a dinky little pink boat that we had to reverse the bikes into, with a bit of a squeeze and then sat along the deck for the slow chug up and across the river. The landing wasn’t a jetty, instead we were simply deposited on an old concrete slipway in the mud flats.

“That really is a lot of extra weight you’re carrying,” a lady, waiting to board, said to me as I was shoving the bike up the ramp to get off the ferry. Another smiling, encouraging person. It seems we were attracting some attention today!

The onward ride was wonderful, along bridlepaths, past farms, along narrow lanes, through trees and all the time we had the spectacular sun shining on us again. It even became a t-shirt day, it was that warm.

“I’d just like it noted for the record,” I called to Steve, “that we are in England, wearing t-shirts in September!”

“We are!” he replied. I think he might like to remember these moments when he next has a bout of the weather woes.

We paused for some lunch on a seat overlooking a pebbly beach at Titchfield and then rode the final 10km into Gosport. We had a great path running above the water and then cycle lanes all the way to the ferry terminal. We hopped aboard ferry number three, to take us across the river to Portsmouth Harbour and our final destination for the day.

We might have only ridden about three hours today but we were actually on the road for twice that, we spent so much time stopping to read information, look at things and visit interesting sites along the way. That’s what we like. No rush, no huge long rides that make the day feel like a race to the end, just a leisurely pace that allows us to enjoy the beautiful sunny day, take time to sit and take in our surroundings or time to visit interesting places we stumble upon along the way.  Even the time off the wheels felt leisurely, with our slow chugs across three stretches of water and when you’re on a dinky little pink ferry, well, you can’t help but have a happy, relaxed approach to travel! More to explore tomorrow. On land? On water? The adventure awaits.

Time in the saddle: 2 hours 50 minutes