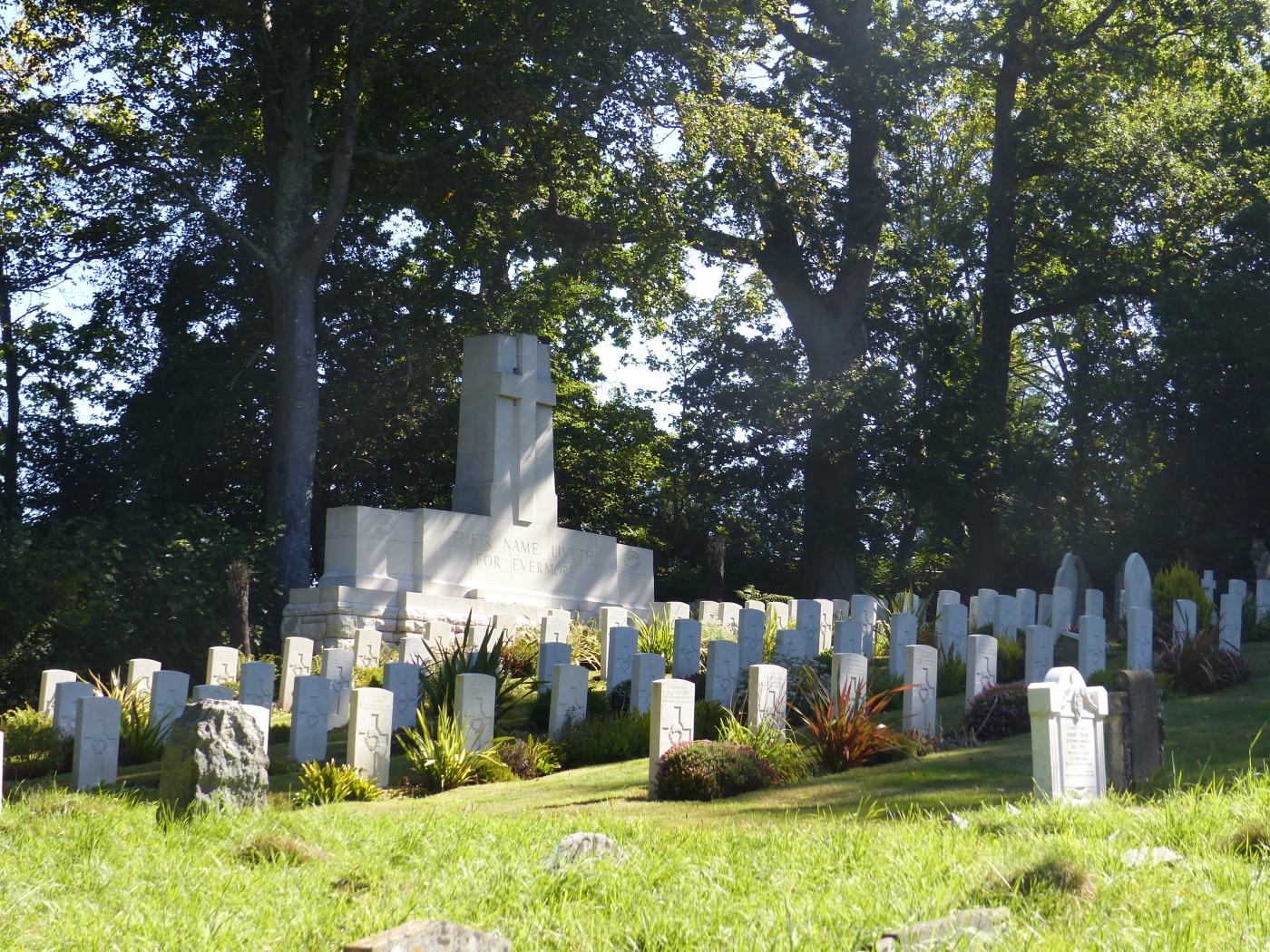 Those words came into my head often today. The things I learned from a village roam. “Well, I didn’t know that,” I would say to myself. “Well, isn’t that interesting.” “Well, fancy that.” It was  a day of history and stories and a wonderful day of finds on the feet.

The day began with another run around the streets of Lymington, in the peaceful morning sun, through leafy neighbourhoods and through the town, just beginning its day.

Steve decided he would like a sitting and snoozing day. A day to do not very much at all, other than sit, with the occasional siesta thrown in. I, however, was still up for some more exploring. After elevenses in the garden of our Lymington cottage, I left Steve to his rest day and set off for a solo roam.

The plaque on the wall of the Brockenhurst train station, about the New Zealand hospital in the village during WWI, had piqued my interest and on discovering there were sites around the village with information about that time, I decided that was most definitely worth a look. I hopped on the train and choofed up the line to Brockenhurst, then with a map of the heritage trail in hand, I got the feet a roamin’ and set off up the road. So today, I’d just like to take you along on the walk with me, through some Brockenhurst history, that also happens to be some New Zealand history, which I thought was a fascinating connection. This little village, nestled in the New Forest, has such a strong connection to our lovely Kiwi cousins.

We’re going to walk up the road from the train station and then take a left onto Church Lane. What a beautiful place to stroll on a glorious, sunny autumn day. This is a quintessential village lane, a narrow, single lane road, lined wth oak trees and hedges, with the sun giving dappled light through the leaves and the twisting, angular branches overhead. It was a lovely, peaceful walk along a little country lane. 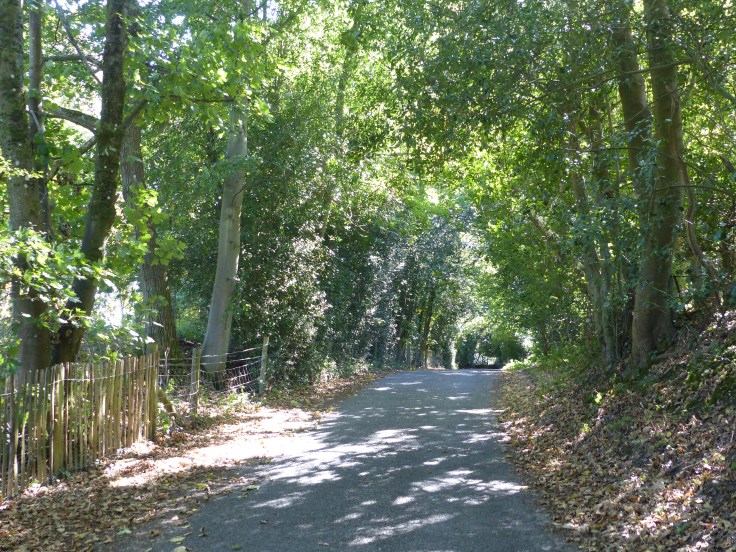 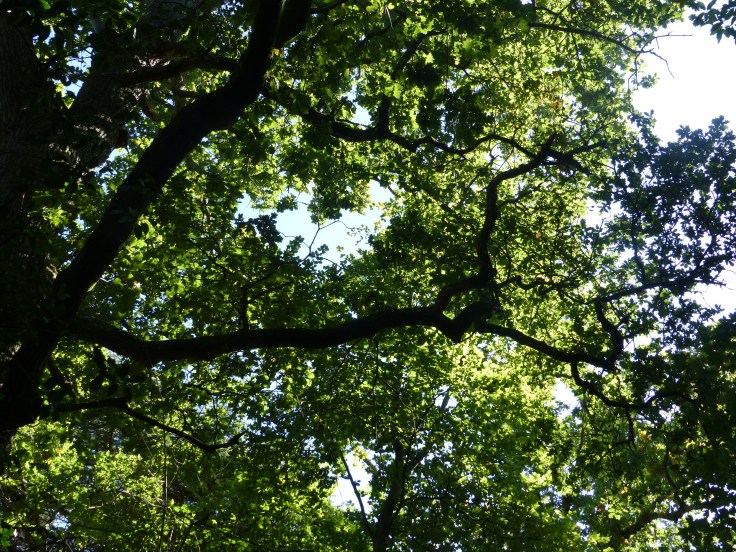 As we reach a corner, on the brow of the hill, St. Nicholas Church is on the left. Walking into the churchyard and down a pebble path, we come to the graveyard and it’s here that we’ll find Commonwealth war graves.

Here lies 93 men who fought with the New Zealand forces in the First World War, including 12 from the Maori Battalion who served in Britain and France. There are also three Indian soldiers, one Australian and one Canadian, as well as three unidentified Belgian civilians who had been working at the Sopley Forestry camp nearby. This, like so many war cemeteries in the UK and Europe more widely, was beautifully maintained and so carefully tended. What I found particularly touching were the ferns that had been planted between some of the headstones, representing the symbol of New Zealand. There were also two large man ferns standing sentinel on either side of the cenotaph.

After walking the rows of New Zealand headstones, taking note of the year and ages of those buried, and spotting the three headstones for the Indian soldiers, I went looking for the lone Australian and Canadian. The Australian was up the front near the cenotaph and the Canadian headstone showed that the soldier, Private Lawry, had been a member of the Canadian Forestry Corp. Well, that’s interesting, I thought. I’d never heard of a Forestry Corp, what did they do? It turns out, these were the men responsible for supplying wood for anything that was needed by the troops and there was a lot of wood needed in the front lines, from building dug outs, to duck boards for walking across mud. Anything that was made of wood, had the wood supplied by the Forestry Corp. It was thought, who better to be put to work, felling trees for the front than Canadians, so this Corp became something like lumberjacks in uniform, serving to provide much needed supplies to the front line and war effort more generally.

I wondered about the unknown Belgian civilians. Why were they unknown? If they’d been working at a nearby Forestry Camp, why didn’t anyone know their names. Surely they weren’t in Britain, away from home, assisting the war effort and were not known by name. I did wonder about them. It seemed very sad to think of them far from home, doing their bit, yet died nameless. The other touching thing, I thought, was the inscription on the headstone for an Indian soldier. It seemed very respectful to acknowledge not just his name, but where he was from and what he had left behind, to serve in a war so far from home. His name was Sukha, from Mohulla, Gungapur and “He left country, home and friends to serve King and Empire in the Great European War.” As with all war cemeteries it was a very moving place to visit, particularly seeing the dates on the headstones, some being so close to the armistice, to die so close to the end of hostilities, and the young ages of many of them. To see this place, so respectfully kept, for soldiers from other countries, was very special. Today, they still hold a service here, on the last Sunday of April, the closest Sunday to ANZAC Day, to acknowledge the service and sacrifice of the New Zealand soldiers.

Continuing up the lane, we still walk under the beautiful oak trees, with the sun shining through and we come to the level ground at the top of the hill. This is where the No. 1 New Zealand General Hospital once stood, staffed by New Zealand officers, nurses and other ranks. Before it was the New Zealand hospital it was the Lady Hardinge Hospital for Indians, where Indian soldiers were sent to recover until 1916, at which time the New Zealanders took it over.  There are no remains of it there today, but we can see the site, sitting so peacefully amongst the surrounding countryside. The majority of patients were nursed here, but others were in separate hospitals in the village. As many as 21,000 men were treated in Brockenhurst before the hospital closed in 1919. The majority of those had come straight from the battlefield, being transferred on hospital ships to Southampton, then by ambulance or train through the New Forest to Brockenhurst station and then on to the hospitals in vehicles, often driven by local volunteers. Local people also gave assistance to hospital staff and provided entertainment for the convalescing patients.  Most of those treated did recover, although those who died either en route, at the hospital, or on nearby bases, are buried in the cemetery we have just visited. 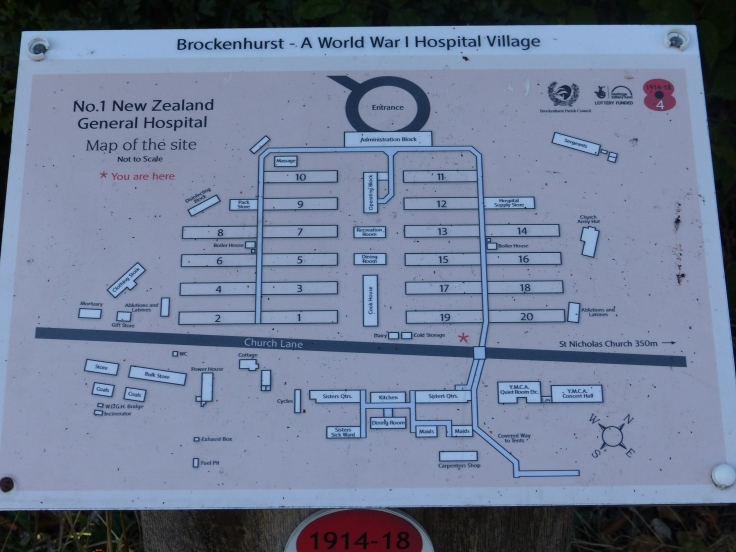 If we turn around and walk back down Church Lane, we pass a bridlepath. Here, during the war, recovering soldiers being treated at the hospital up the road, would walk along here and into Roydon Woods, as part of their recuperation. As we walk back along the lane, it isn’t hard to imagine what it was like here at that time. The beautiful, peaceful countryside would have looked much as it does today and what a haven it must have provided for the men, having come from such horrors at the Front. 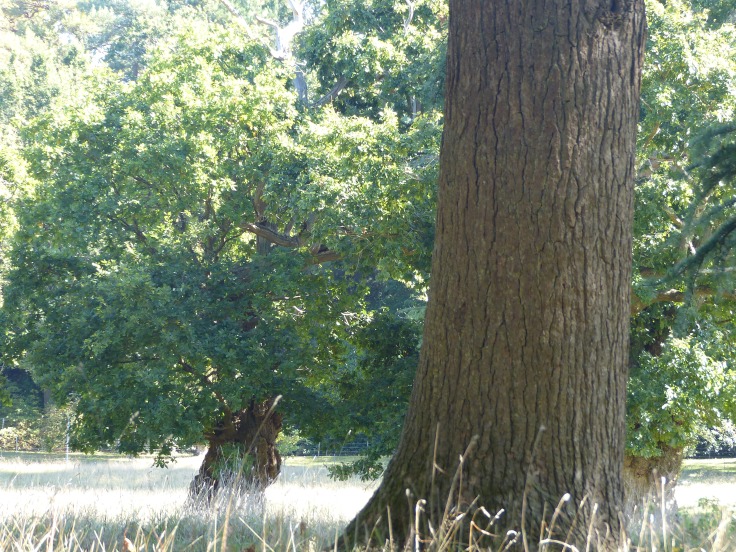 At the end of Church Lane, we turn and head back into the village. Brockenhurst today, is still lovely, peaceful, pretty little place. Tuesday must be village day for the ponies because they are everywhere! Grazing on the green, strolling along the roads and streets, sunning themselves in the yards of houses, just making the place their own. We also walk past some gorgeous cottages and houses, dripping with greenery or sitting beneath those quaint thatched roofs. 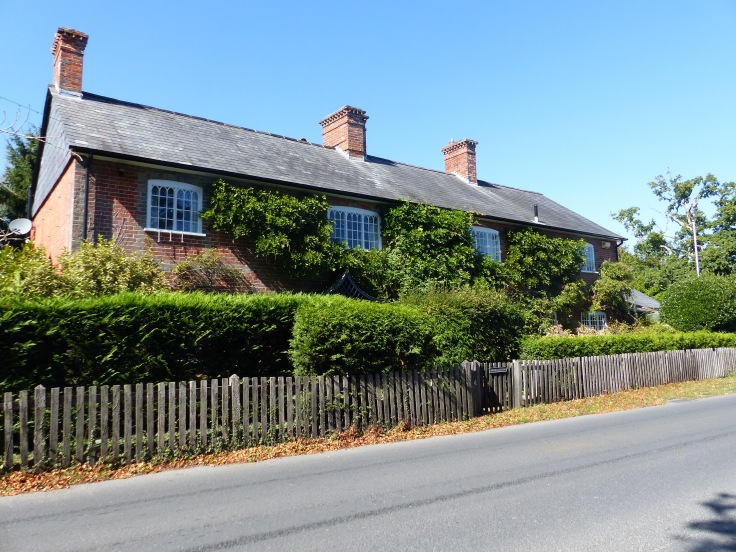 We walk past Auckland Avenue. During the War, a YMCA building was located here and was used as a recreation centre, for soldiers’ R&R. It’s no longer here, but the site has been named Auckland Avenue in recognition of the New Zealand connection to the village.

We keep heading out of the village centre and we cross over Meerut Road, which linked hospitals at either end of the village. Its name commemorates the 7th Meerut Indian Army Division who, with the 3rd Lahore Division, were the first casualties to arrive in the village. 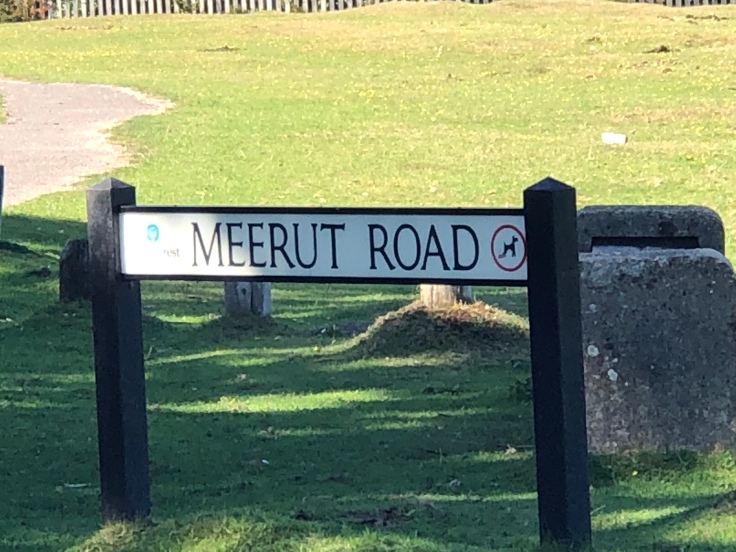 Out the other side of the village, we come to Forest Park Hotel. This was commandeered during WWI and used as a hospital, becoming an annexe of the No. 1 New Zealand Hospital. Its appearance today, remains much as it was at that time, virtually unchanged.

Back into the village we go, on our way back to the train station. We turn down another road and come to, what was known during WWI, as the Kia Ora Building. Kia Ora, is a Maori phrase, used in New Zealand as a greeting and translates as “be well” or “be healthy”. This building was used as an R&R centre, where men would play cards, read newspapers, play dominoes or billiards and meet up with soldiers from other units around the village. Today it’s a Masonic Hall and part of the Silver Ferns Housing Development. I think that says something about the importance placed on the contribution of New Zealand during the War, that even today, as a new housing development is constructed, it is given a name with a New Zealand Connection, the “Silver Ferns”.

Well, that concludes our walk! I don’t know about you, but I found it really interesting to discover that history here. I learned a lot, discovering connections I hadn’t known and facts I had been oblivious to, such as what a Forestry Corp was and did!

Back on the train and a choof back down the line and we are back in Lymington, another  lovely, peaceful town, with a quintessentially English feel. 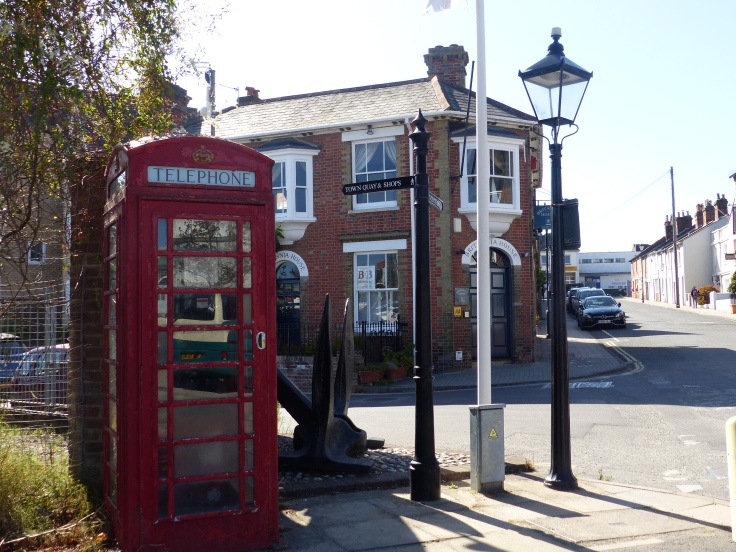 Steve had spent his time doing just what he’d wanted to do, which was not very much at all, so a successful “rest day” had been had! With the sun still shining, we walked around the corner to the local pub, for a late afternoon beverage outside in the sunshine. We are sitting in England, in t-shirts, in sunshine, in autumn. How brilliant is that!

There ends another day. A roaming day for me and one that helped relieve my curiosity from that sign at the railway station, but probably left me with some new questions too. But…isn’t that what learning is all about! And…isn’t travel just one of the best classrooms around! We move on tomorrow, back on the wheels, to see what more is out there to see, discover and learn. School’s in and I’m ready for my lessons! 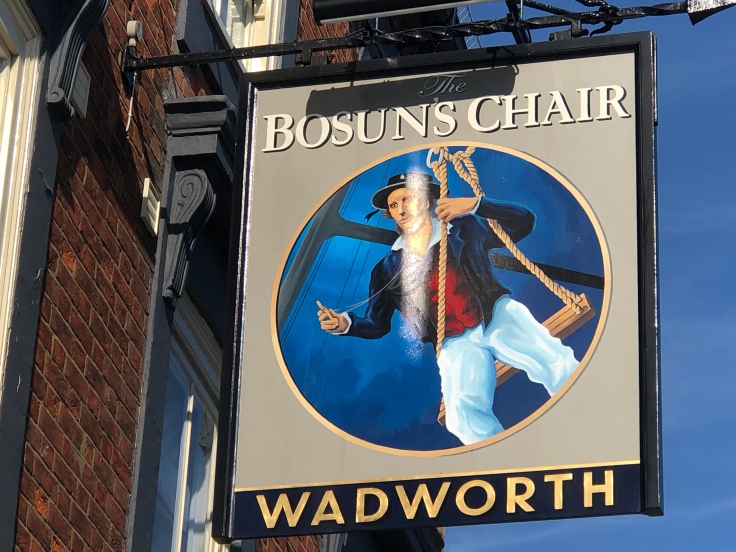 2 thoughts on “Well, Isn’t That Interesting”