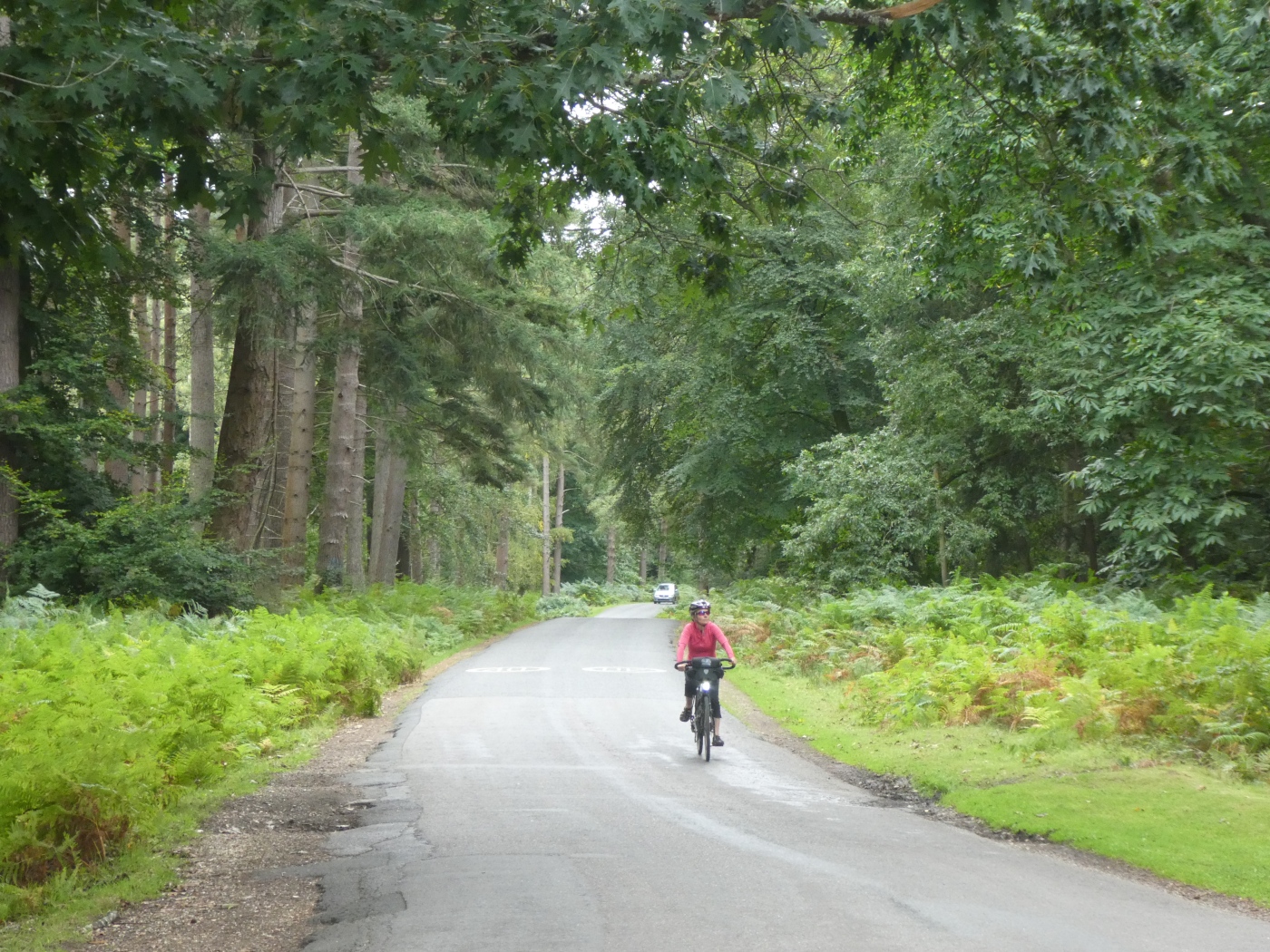 Another day to explore the New Forest, but a slower day, a quieter day and a day to look for some stories beyond the roaming ponies.

We set off on our ride from Brockenhurst again and pedalled into the New Forest National Park, along one of the roads that cuts through the heathland. Stories began right from the start, as we found ourselves riding past World War Two history. On either side of us, across the heath, were large depressions in the ground, like very wide holes. We discovered these were actually bomb craters and the New Forest played a fairly significant role in the war. The area was used as a training ground and tanks manoeuvred across here, as well as there being firing ranges. One part of the New Forest was also a bombing range and Lancaster Bombers and American bombers would fly over there, testing bombs for their effectiveness and range. Even the famous “bouncing bombs” were tested there. Enemy aircraft also flew over the area, to and from bombing raids inland, so the craters we saw could have been from testing or could have been dropped from enemy aircraft, on their return from a raid. The bombing range was kept very hush-hush at the time and the locals were kept at a distance, with fencing put around the area, the concern being at the time that, “loose lips sink ships”, so the fewer people who knew what was going on, what was being tested and the results of those tests, the better. 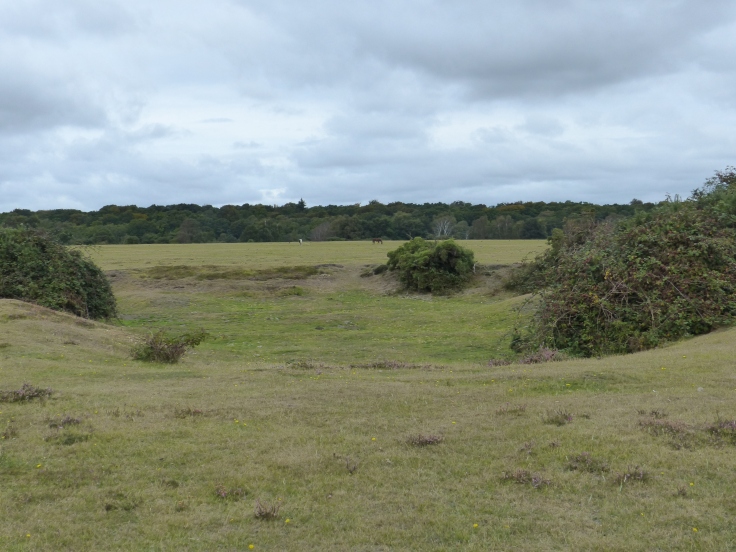 We pedalled on, along the road, passing a lot of ponies along the way and then turned into Puttles Bridge, where we found a lovely spot for elevenses, so parked ourselves on a tree.

Up the road we went and then off road onto the gravel trails that dissect the national park. This was a fantastic place to ride because we were very much in the forest and what a forest it was. We rode through the Rhinefield area that took us through immense stands of redwoods. This area has the tallest trees in the New Forest and they were grand indeed. Without the weekend visitors, it was really quiet everywhere we went, just passing a few other cyclists tootling about. So, here amongst these amazing trees, it was absolutely beautiful. Quiet, serene, no voices, no wind, nothing stirring. The trees themselves were amazing. I’m not sure if it was the cloudy day producing a certain sort of light, or if it’s what redwoods look like all the time, but the beautiful colour of their trunks, seemed almost to glow.

We were in the redwood forests for quite a while, pedalling along the paths that meandered through the woodland. It was lovely, just a peaceful pedal amongst the trees, in a beautiful place.  We rode past a deer sanctuary, where Fallow Deer are protected within a large fenced area and fed by the park keepers.  We scanned across the grassland hoping to catch a glimpse of some, but alas, today wasn’t the day for us. We continued through the forest and then rode over Bolderford Bridge. There was once a settlement in this area, including a royal hunting lodge and deer park, in 1484 when the land was owned by the crown. What we see today as the New Forest National Park, were once royal hunting forests with many types of deer roaming for the purposes of royal “sport”. When royal hunting forests were created it sometimes meant existing villages were demolished, to create open areas for hunting and for the construction of hunting lodges. Already, we’re getting the picture that this area and the New Forest, has a very diverse history.

Just past Bolderford Bridge, we spotted another nice, peaceful spot amongst the trees, with a tree trunk just waiting for us to perch on, so that’s what we did and had some lunch. 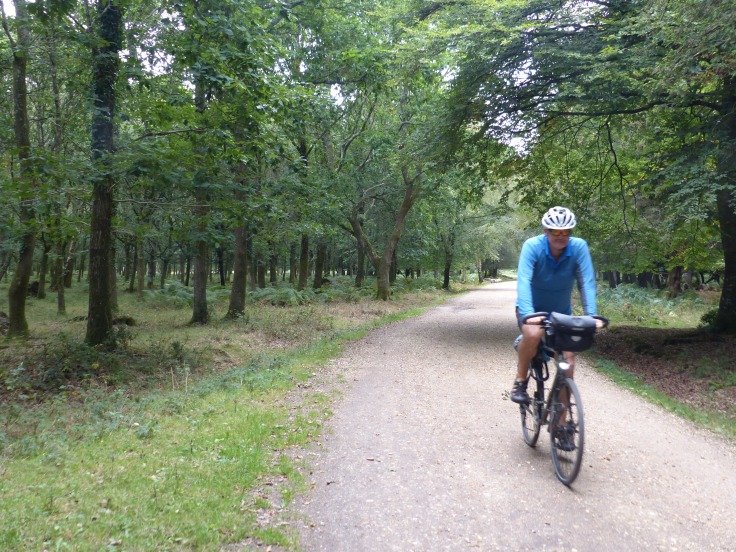 Back along the tracks, trails and roads, passing more horses and then, unexpectedly, some pigs! Later, Steve saw a man walking down the road carrying apples, looking for them.

With this country’s love affair with bacon, all I can say is, well done for escaping you dear little pigs, now RUN those trotters, RUN!

Back into the village of Brockenhurst and we discovered another piece of history from our end of the world, that we hadn’t known about. A sign at the train station told us that Brockenhurst was a World War One hospital village and the hospital was the No. 1 New Zealand General Hospital, which was staffed and operated by the New Zealand Medical Corp. While it operated, 3,000 Indian and 21,000 New Zealand  troops were admitted to the hospital. Amazing to discover that a little village like Brockenhurst has a connection with our Kiwi neighbours.

Back to Lymington we went and ended a lovely, leisurely, peaceful day. Speaking of connections to Down Under, when I looked at the map of our route today, it looks like we rode a map of Tasmania! A little bit of home crops up in the most unexpected places! It was another wonderful day. They just keep coming. Riding through the forests was beautiful and gave us a chance to see a completely different landscape to the ones we’d ridden through the last couple of days. We swapped the open heath and oak trees for some beautiful grand redwoods and dense forests. I even stopped and just looked at those amazing trees for quite a while, standing on the side of the path, staring up and across at them, at the amazing colour of them. I continue to delight in all that England is giving us and today put yet another smile on the dial, with wonderful places to ride and interesting stories along the way. Those redwoods may be tall, but this smile is a mile wide!

Time in the saddle: 2 hours 12 minutes

Our route: (Riding a map of Tassie)!

4 thoughts on “A Very Peaceful Pedal”