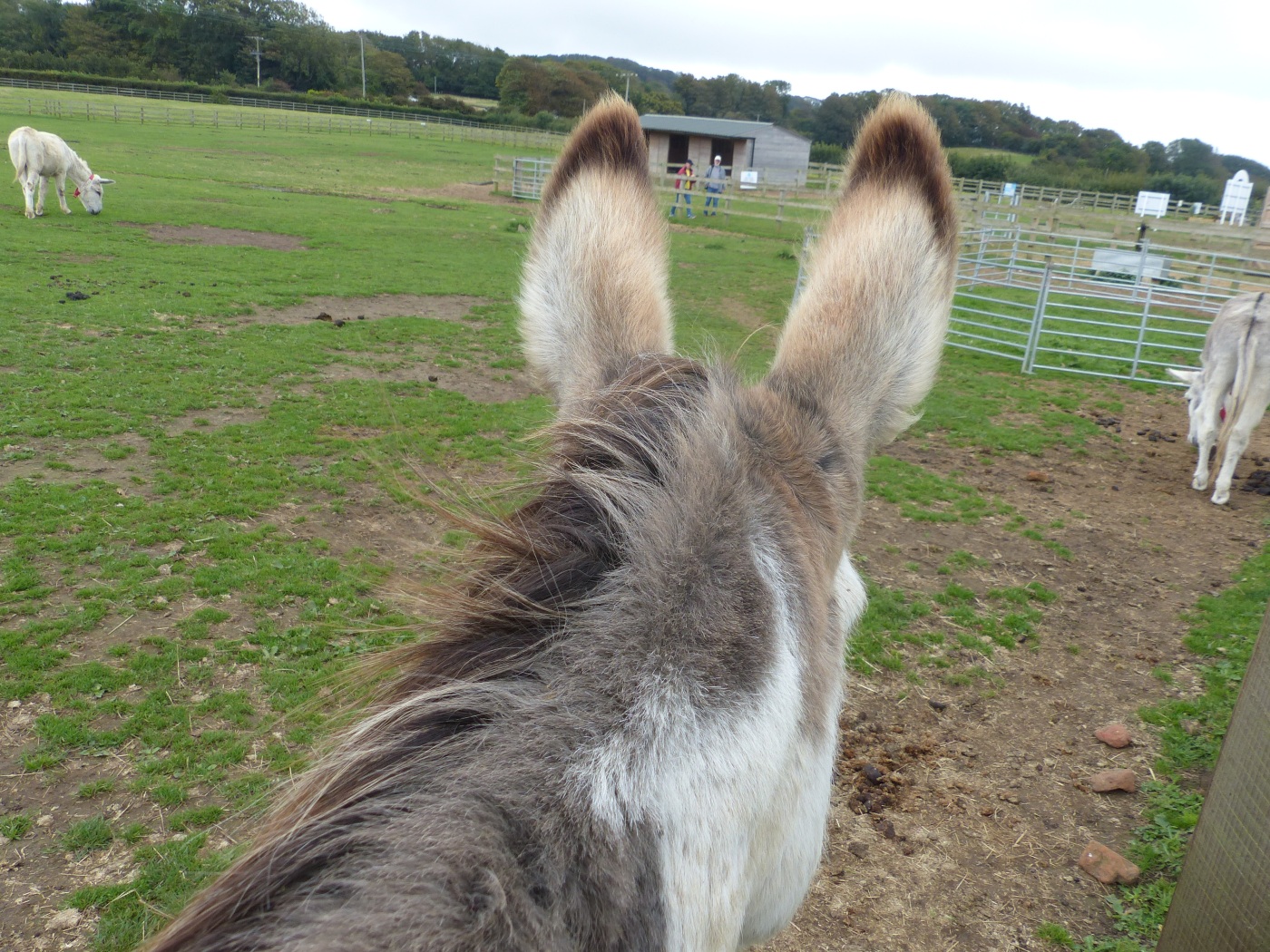 We had a day on the pedals to explore a little further around the Isle of Wight and it was all terrific, with variety being the order of the day.

We set off through the streets of Newport to join the Red Squirrel Trail, so named because it is supposed to have red squirrel habitats along the way. Red squirrels are the only squirrels native to the UK and their numbers have been declining. They’ve actually been eradicated from the mainland of southern England, but the Isle of Wight is one of the few remaining places that still has a thriving population. Spotting them is still a rare occurrence, so we pedalled along, me with eyes front, back and sideways, on full alert for the little critters.

Part of the Red Squirrel Trail follows another former rail line, so for most of it we had another brilliant, traffic free path. We began along a lovely peaceful stretch beside and under trees, on a grey and drizzly morning, but with a warm mugginess to the air. 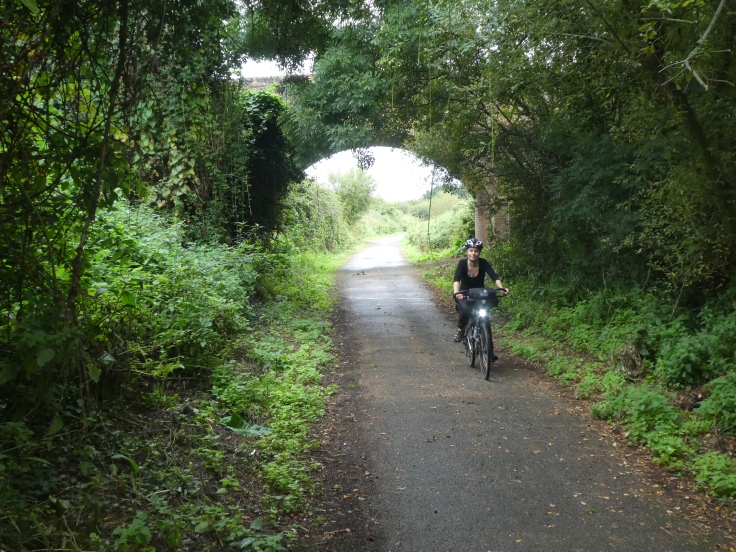 The path took us through Shide and Blackwater and then we came to the old Merstone Station where the original platform remained. The station was built there in 1895 and closed in 1956 but another feature still remains. The pine trees that were planted there in 1903 are still standing. 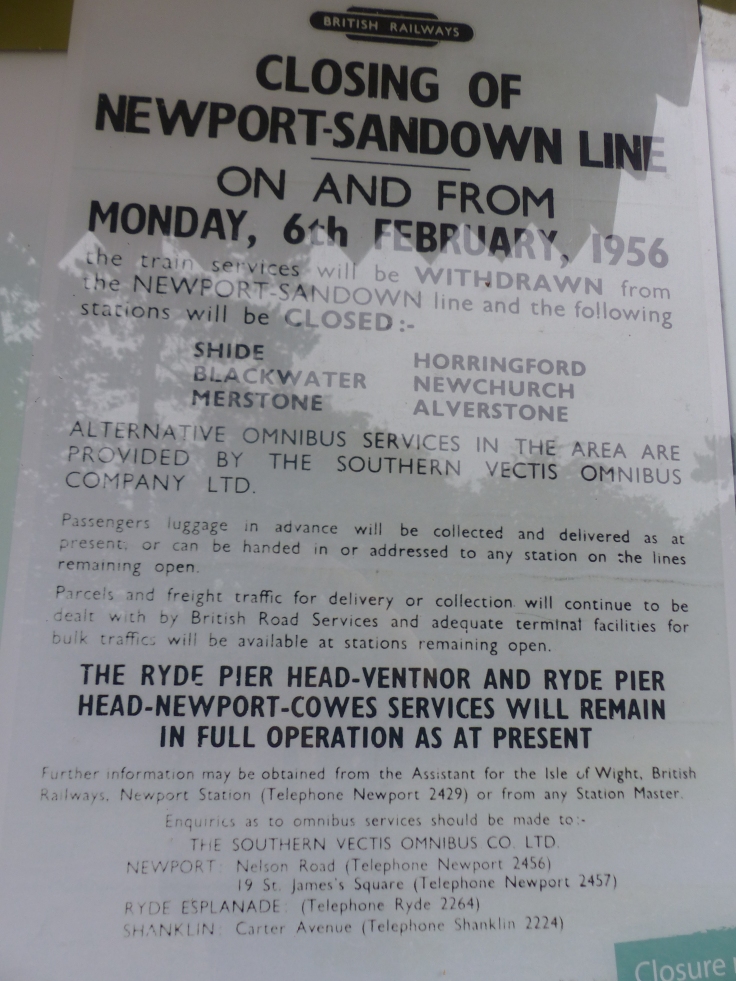 On we went, past fields and over rivers, before coming to Sandown. 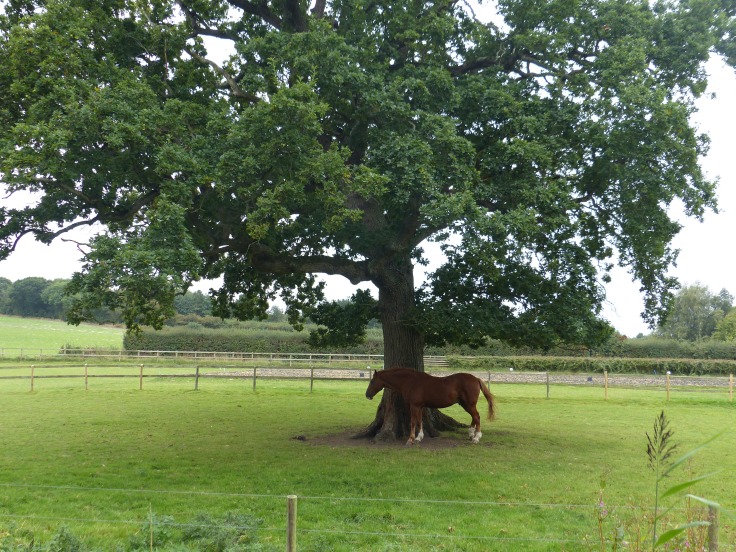 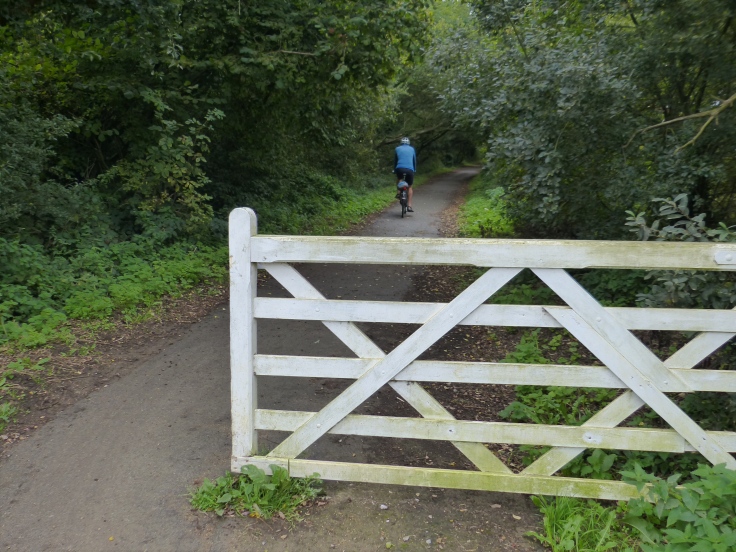 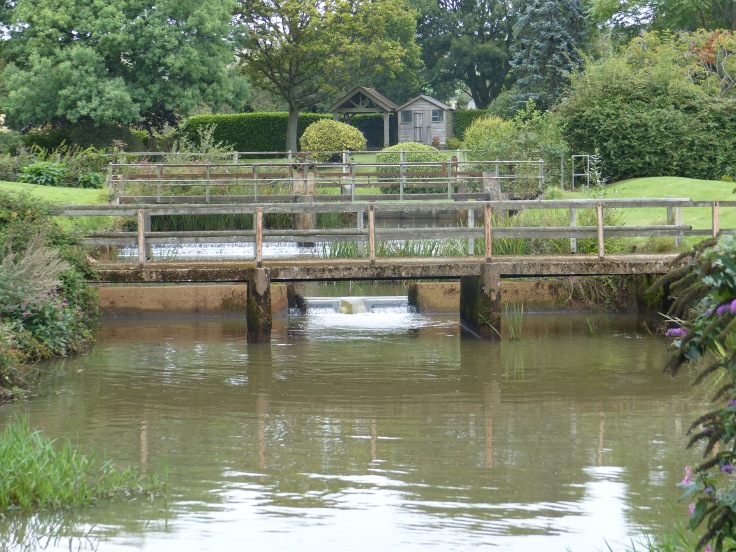 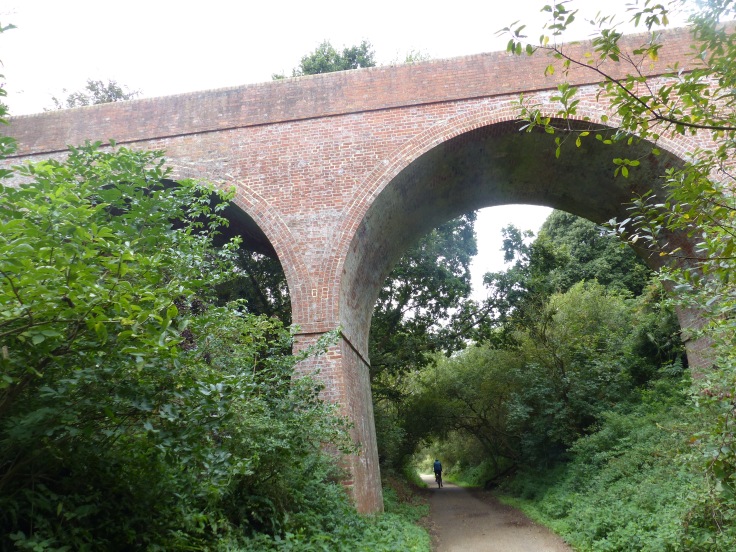 The rail path ended and we were on streets down to the seaside. Sandown seemed to be a former resort town that I’m sure would have been a hive of summer activity in its heyday. The pier was still there and operating, but it seemed like its glory days were behind it. We stopped at a seaside cafe for elevenses, at which point the sun gave us a treat by peeking from behind the clouds for a short time.

We passed other people cycling or out enjoying a walk, as we rode on along the esplanade, past beach huts, with a view across to the chalk cliffs and then the esplanade took us beside the Shanklin seafront too.  A detectorist was at work, down on hands and knees digging in the sand, before standing again, without a find, and walking across the sand, waving his detector left and right, still seeking that elusive “treasure”.

It wasn’t only people who were enjoying the location. As I rode along, a Springer Spaniel came trotting towards me with the biggest grin on its face, looking like it was on a mission. Then it turned to the steps down to the water, raced down those steps and dived in. Off it went, swimming around. I watched for a while to make sure it found its way out again and sure enough, after swimming back and forth and around in a big circle, it paddled back to the steps, climbed out and stood at the top, grinning and wagging its tail furiously. A very happy paddler it was.

Out of Shanklin, we had a steep hill climb up a street. At the top there was a man and woman sitting on a bench enjoying the view. They smiled as we reached the top. “Well done,” called the man and gave a big thumbs-up. Oh, these lovely people! We picked up the rail trail again, riding through tunnels of trees and then under old rail tunnels and it was all simply delightful. The sun disappeared and the wind got up, but it wasn’t cold and we pedalled along, passing walkers and horse riders and it was yet another fabulous place to ride.

Approaching Wroxhall, we turned off the path to visit the Isle of Wight Donkey Sanctuary. What a wonderful place it was. The sanctuary is home to 97 donkeys and 26 ponies, all of whom have been either abandoned or rescued. Unlike some other animal rescue centres, which find themselves having to put down some of the animals that come to them, this donkey sanctuary is the type that provides a “forever home” to the donkeys, horses and ponies that come into their care. It welcomes visitors, with education being a part of their work. Paths run alongside the paddocks, with information about donkeys and panels explaining how the animals are cared for. 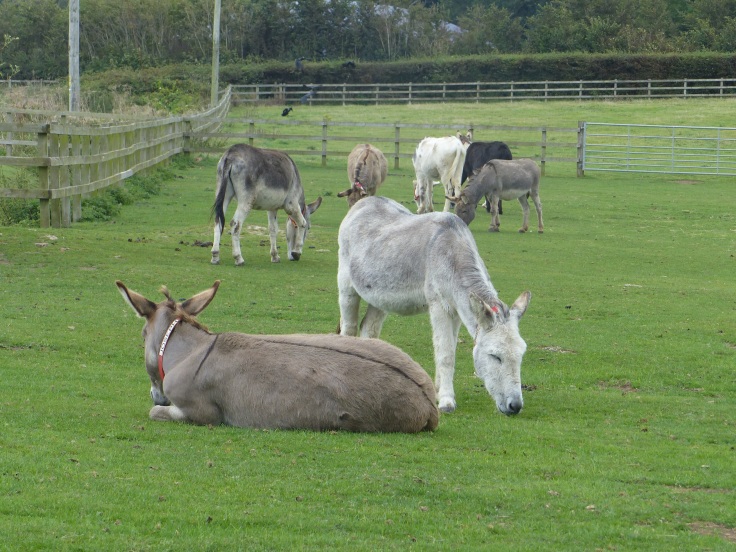 I was so impressed with this place. They get by on donations alone and all the animals  were in such good nick. You can usually tell how well cared for a horse or donkey is, by the state of their hooves. I looked straight to their feet and they were top notch. All of them looked healthy, groomed and happy. There were explanations about how they are kept, with different groups being separated. A paddock for the jennies, a paddock for the jacks, another for the youngsters. A paddock for the “diet donkeys” who need to be kept off the rich grass and another paddock for the ‘Old and Proud Herd’. When we arrived, we were told that because the weather was a bit inclement, the oldies had been brought in from the paddock and were in the barn, so they were sheltered from the cooler weather. We visited that group first and all those donkeys were over 30 years old. One sidled up to me and turned for a pat, so I stood for quite a while, giving it a wither scratch and a pat and it stood, quite contently, lapping it all up.

We walked amongst the paddocks and it was lovely to see such a range of people there, old and young and families, reading the information boards and patting the residents. A woman walked beside one of the paddocks with a dog and it was such a sight to see the herd of donkeys all swarm to the fence, fascinated by the dog. They stood there, heads up, ears pricked, staring at that dog. I’m not sure what it was about that dog in particular that took their fancy, but it was so funny to see them all stop and make a bee line for the fence to stare as the dog went past and then keep staring as it disappeared down the path. We spent quite some time, walking around, talking to the donkeys and ponies, stopping for a pat and it was a place that really put a shine on an already fabulous day.

We pedalled on, back up to the path, through trees again, then onto country roads, through a farmyard and then back onto the rail trail. We stopped briefly at a heritage park where, to Steve’s great excitement, we saw another velociraptor! Our first since being in the UK. Yes, that running joke, explained in a previous post, is still alive and well! 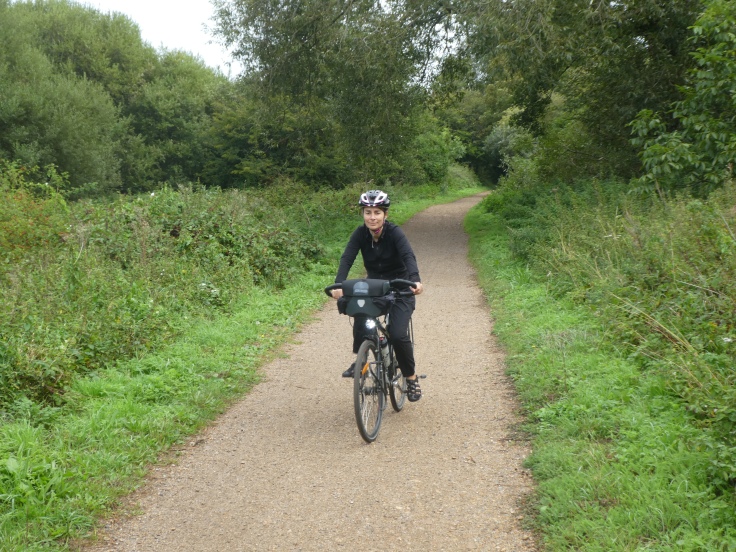 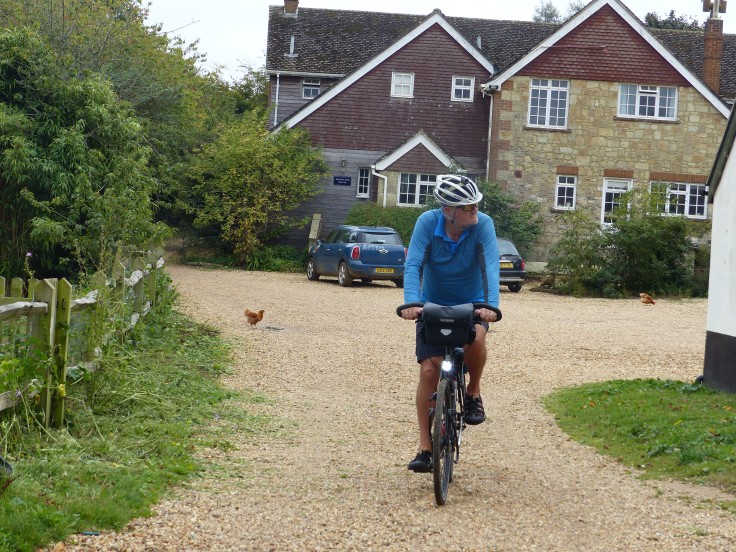 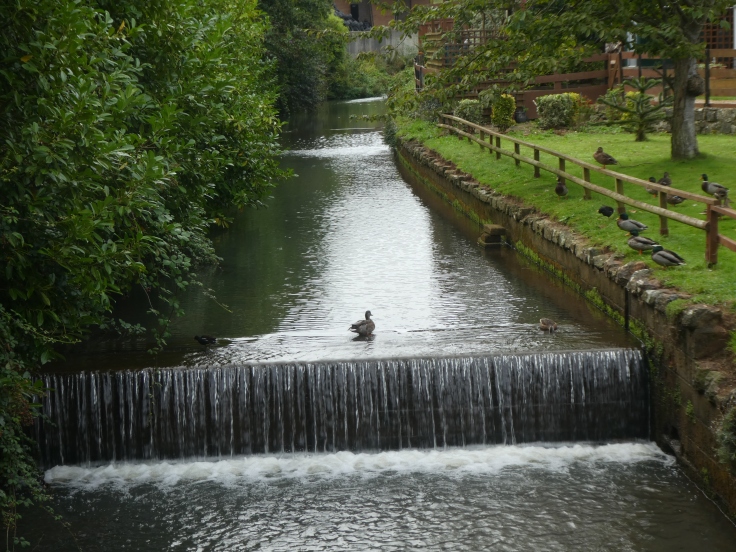 Back into the streets of Newport we wheeled, just as the sky began to look particularly ominous and we called it a day. What a brilliant day. A wonderful ride, with such variety along the way, from forests to rivers, fields and seafronts, old rail stations and then the wonderful donkey sanctuary and more friendly people along the way. Today was our last full day on the Isle of Wight and I couldn’t have had a better parting experience. It was all simply delightful. Magic. Ripper. Fabulous. The donkeys were a highlight and they most definitely turned what was already an awesome day, into a Hee-Hawsome day indeed!

Time in the saddle: 2 hours 46 minutes

Weather: grey, windy, a bit drizzly, then briefly sunny, then grey, but not cold, 17C

Squirrels spotted: 0.5 (a grey tail disappearing behind a tree, alas not red)