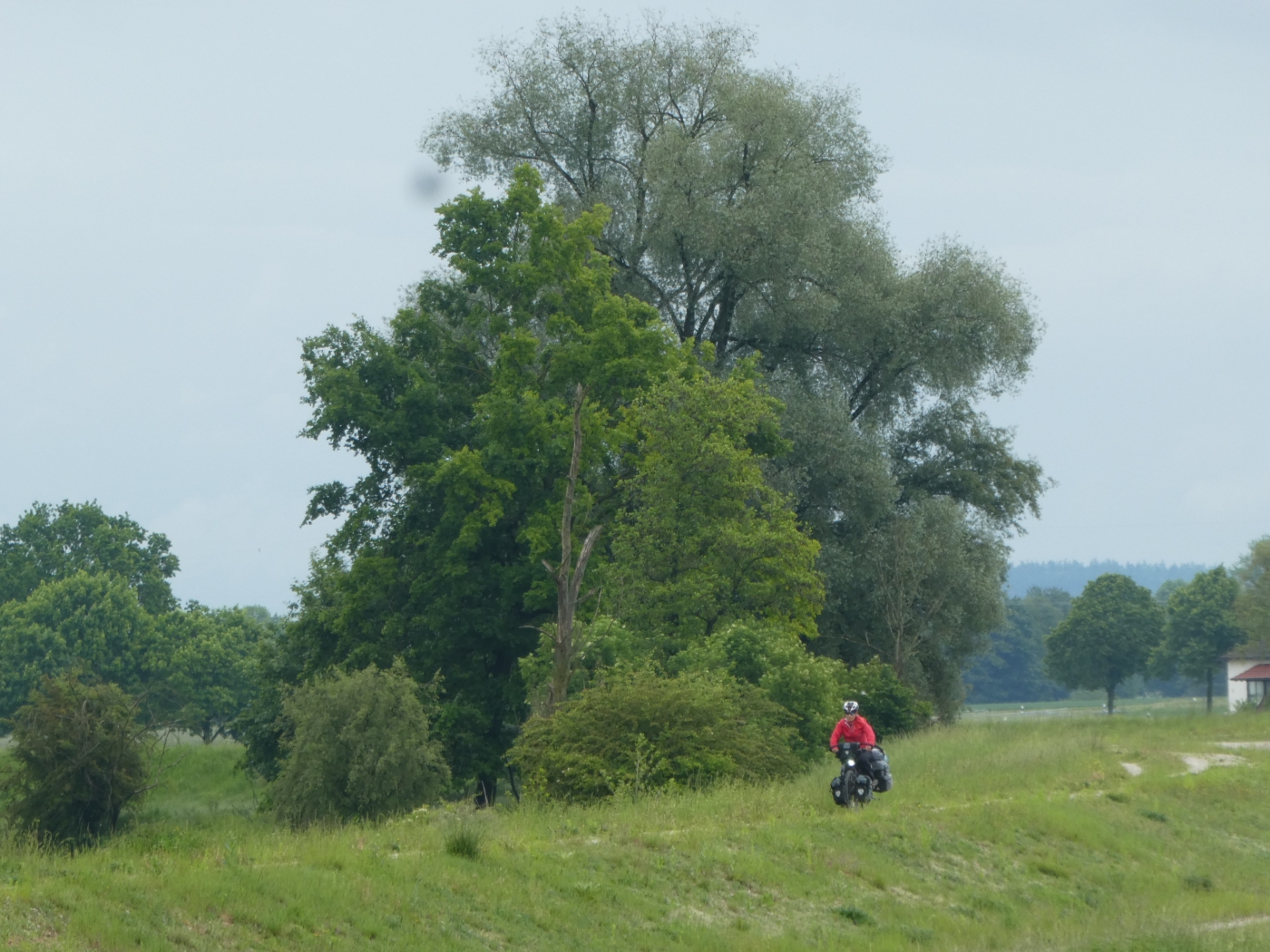 May 28 – Bad Goggin to Ingolstadt

Try sleeping through that, when the only thing between you and the downpour outside is a thin layer of nylon. Not going to happen. No sleep was had thanks to the drumbeat of rain. The rain came down all night and by the morning, some of that rain had also come down into the tent. There were puddles outside and in. It kept up as we sat eating breakfast, huddled in the little annex of the tent, contemplating another wet ride and, before that, packing up a wet tent and packing damp gear into damp panniers. Never much fun. By the time we were ready to leave at 8:30, kitted out in our waterproof layers, I could confidently make the announcement, “I think it’s brightening!” There were definitely little patches of sky between the clouds and the rain had eased. Time to get going, while the going was good!

The path was unsealed, so gravel and puddles and some mud, but good enough to wheel along without too much difficulty. We were on the bank up above the river, which was good, because the rain had filled the river even more and it had spread itself over the ground around it yet again. We were well away from it though, so pedalled along, stopping to help another cyclist from the U.S. with directions. He was on his way to the ferry that we’d caught yesterday, so we could let him know he was going the right way. “That’s good,” he said, “Google has been sending me around in circles!”

We saw a bend by the river and stopped for elevenses, while the break in the rain held.

Then we pedalled on and saw some lovely swans, gliding gracefully down the river. A velociraptor also made an appearance. What!? You may be asking. The velociraptor is a running joke with Steve and myself as a reminder that Steve would definitely not have “Birds” as his special subject on Mastermind. When we were riding in England on our last trip, almost daily Steve would say, “I keep seeing this thing and I don’t know what it is, but it looks like a velociraptor. It runs like the dinosaur from Jurassic Park.” When we were sitting at lunch one day, one of these creatures made an appearance for me to actually see what Steve had been talking about. I looked at it, I looked at Steve, I looked at it again and then turned to Steve, with a disbelieving look and simply said, dead-pan, “It’s a pheasant.” Today, as we rode along, Mr Ornithologist made the observation, “It’s a velociraptor! Go velociraptor!” as the pheasant took off, running across a paddock. Oh, the high level, scientific observations we make on our travels!

We pedalled on and rolled into the little town of Vohburg. The rain had continued to hold off, so we threw caution to the wind and removed some waterproof layers. Oh, the optimism!

The path took us through some trees, beside some industrial areas and into the outskirts of Ingolstadt. With about 10km to go, our confidence took a slap down as the rain, again, came down. At first we held out, thinking we’d deal with those few pitter-patters. Then the pitter-patters became patter-plonks, then it became a continuous downward flow of water. Darn! We stopped under a bridge and back on went the waterproofs. Oh well, it was good while it lasted.

We sat at the train station in Ingolstadt, to take some shelter and then managed to check in a little early to our accommodation, which was great. We could hit the shower, get warm and eventually dry and feel a little less drenched and disheveled. One thing I’m noticing about cycle touring, is it does leave you with an awful lot of bruises! Well, at least it leaves me with an awful lot of bruises, because Steve doesn’t seem to have quite the collection of purple splotches that I do. Most of mine are from walking the bike and banging the pedals against my leg, or the bike tipping over and banging into me as I try to stop it falling or it banging me as I haul it back up from the ground. One doozy of a bruise is from when Steve accidentally turned into me the other day and knocked me off my bike. One of the many daily accidents and hazards that happen with this form of travel! Then, a couple of days ago I stopped on the side of the road to wait for Steve who was riding behind me, I put my foot on the ground and unknowingly stepped on an ants’ nest, the residents of which then processed to flock up my leg. So now I have a collection of red ant bite spots on my legs to match the purple bruise splotches and I have quite the multicoloured, polka-dotted badges to show for our travels at the moment!

We are in Ingolstadt for two nights, because we have plans tomorrow, so it’s really just a jumping off point for us, before we ride on. Today was a getting from A to B sort of ride and another soggy one, but still all good. I love being near the trees and the water, I love seeing birds and wildlife and hearing the birds in the trees rather than the traffic on the road. Today wasn’t as picturesque as yesterday, but still a nice ride, peaceful and quiet and I stayed upright in all puddles and mud, which is always a win! What am I saying? The whole thing is a win. Every day is a jackpot! Ker-ching!

Time in the saddle: 2 hours 35 minutes

2 thoughts on “Pedalling Peacefully Through Puddles”