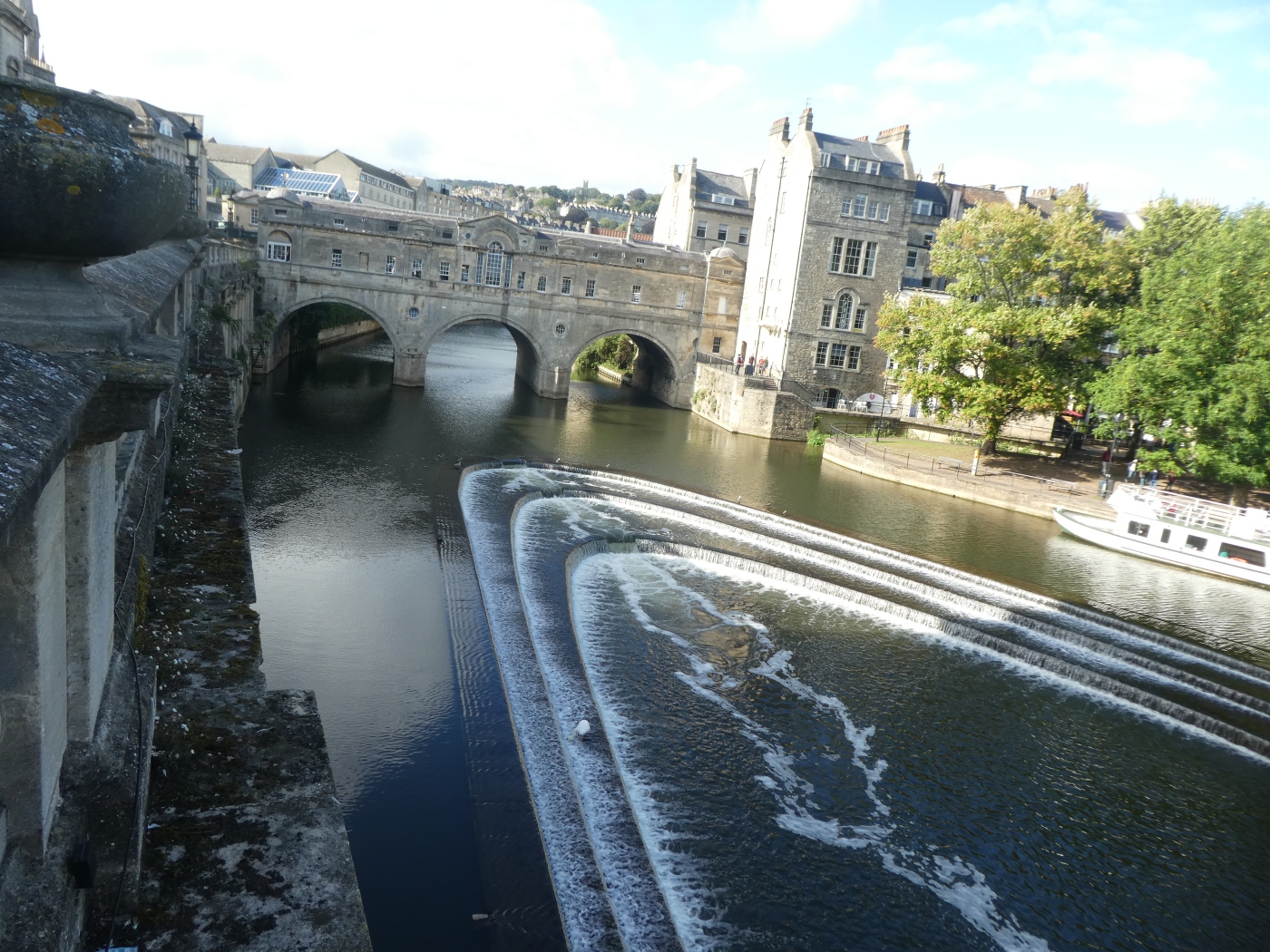 After yesterday’s lovely but hilly ride, today was the opposite on one of those counts. It was still lovely but anything but hilly. It was a very relaxed day and it was brilliant.

We left Bristol later than usual after spending a bit of time roaming around in the sea of foot and pedal commuter traffic. There are heaps of bikes in Bristol, in fact it has more bikes than anywhere we’ve been, since leaving The Netherlands. It just goes to show, if you put the infrastructure in place people will use it and get out of cars and onto pedals instead. Bristol has a terrific network of lanes and paths for bikes and shared paths for pedestrians and cyclists and there were people commuting everywhere, walking and cycling which was great. Put in the paths that allow it to happen and it will happen. Come on Australia, lift your game! 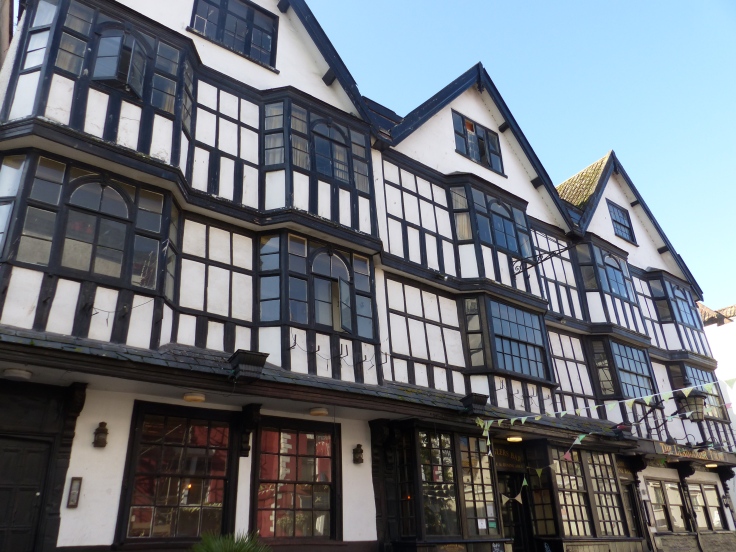 After a short and not too photo-worthy stroll around, we set off on the bikes along the Bristol and Bath Railway Path. This follows the old rail line between the two cities, which closed in the 1960’s. It was another fantastic place to ride. It wasn’t completely flat, in fact the first few kilometres were all uphill, but given it was once a rail line, the incline was so gradual as to be barely noticeable. The old trains would have had a slow climb out of Bristol though. 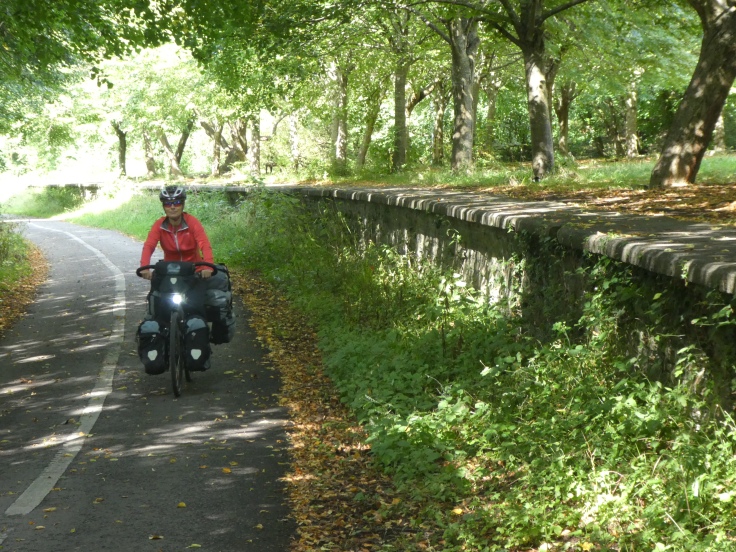 We tootled along, passing many other cyclists and walkers. We got continual smiles and “good morning” from those who passed us. One couple rode past and the lady gave a beaming smile and a cheery “Enjoy your hols! Have a good time!” 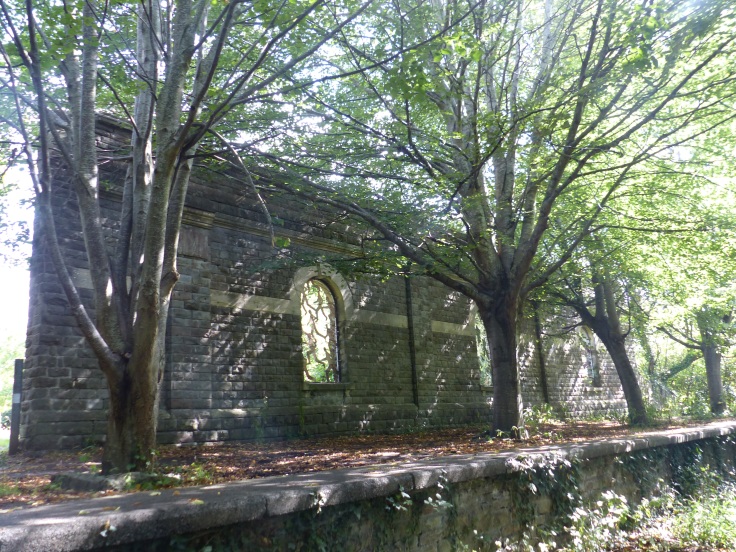 Under arches we went, through trees and it was actually the best place we could have been on the bikes today. There were 55 km/h winds today, so at least on the rail path we had a bit of shelter because beyond those trees it was really blustery.

One of the coolest things on the path was the tunnel. This was a good 500m long and we pedalled through the long stretch of darkness with water dripping from above and it was very “atmospheric”!

One of the lovely old stations had been turned into a tea room and we came upon it at just the right time so we stopped for elevenses. It was a lovely spot sitting outside behind what was once the station platform, with the sun shining and it was just delightful. 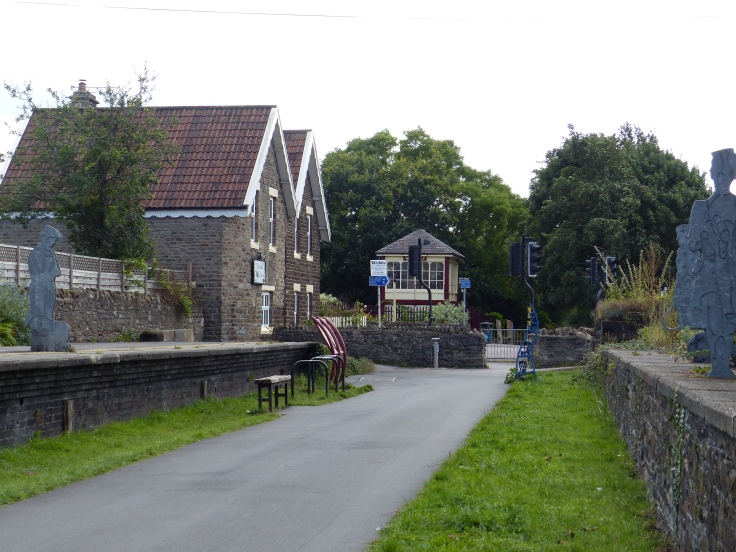 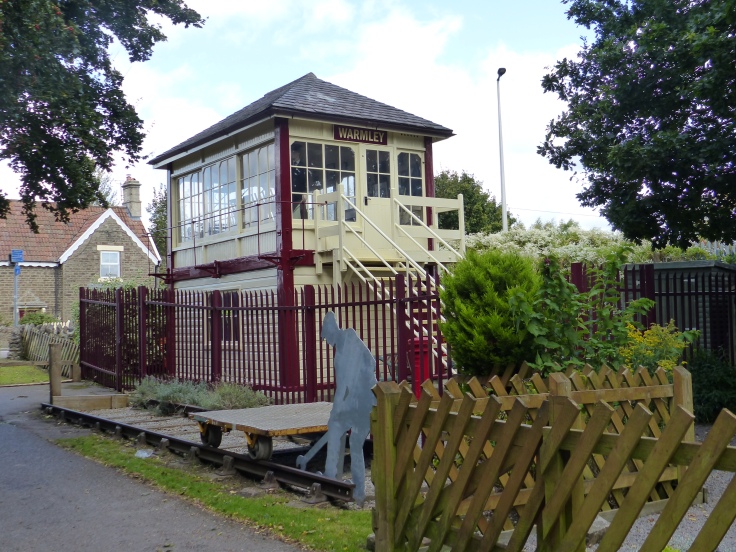 The next station we came to was the former Bitton station, which had also been set up with a cafe and facilities for cyclists and walkers. Another couple were getting off their bikes when we arrived and asked where we were from. The man’s jaw completely dropped when I said Tasmania.

“We’ve only come from Bristol!” the lady said.

“It’s such a nice path to ride along,” they said, to which I agreed wholeheartedly. We chatted for a while and they went off to enjoy the cafe. We made use of the bike pump that was available, gave our steeds some spring in their step and then set off again. 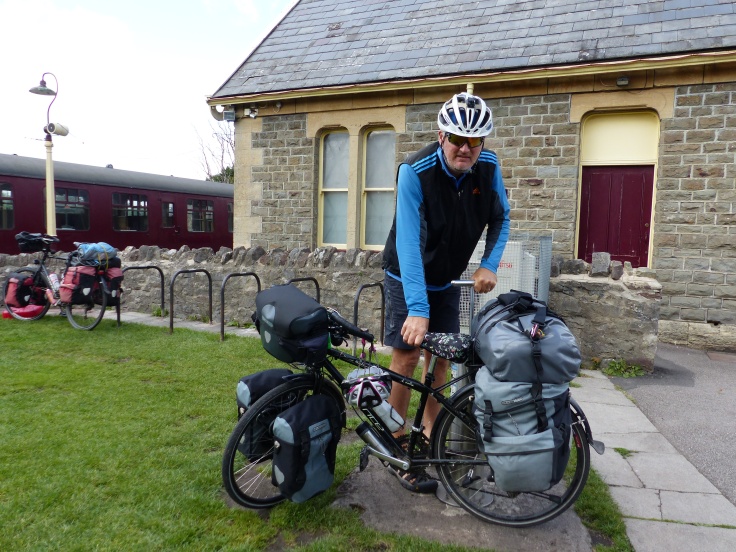 The onward pedal took us over bridges, beside more stretches of trees and over roads and rivers. All the time we were blissfully traffic free along this fabulous path, just tootling along as merry as can be. 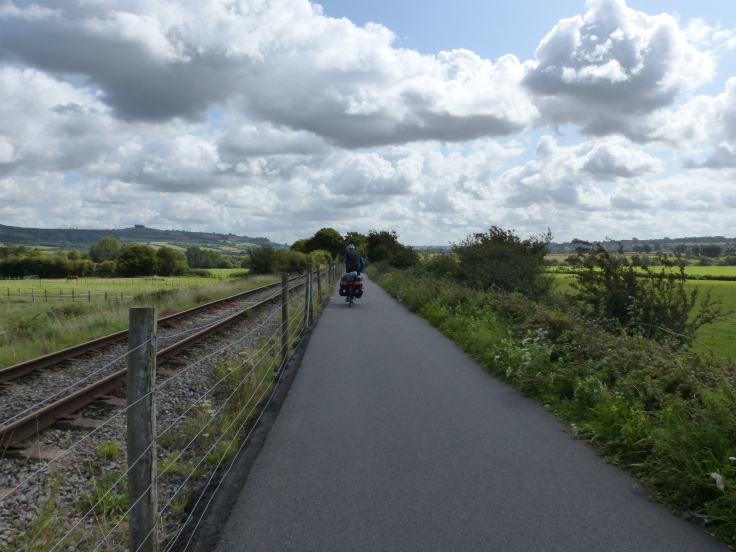 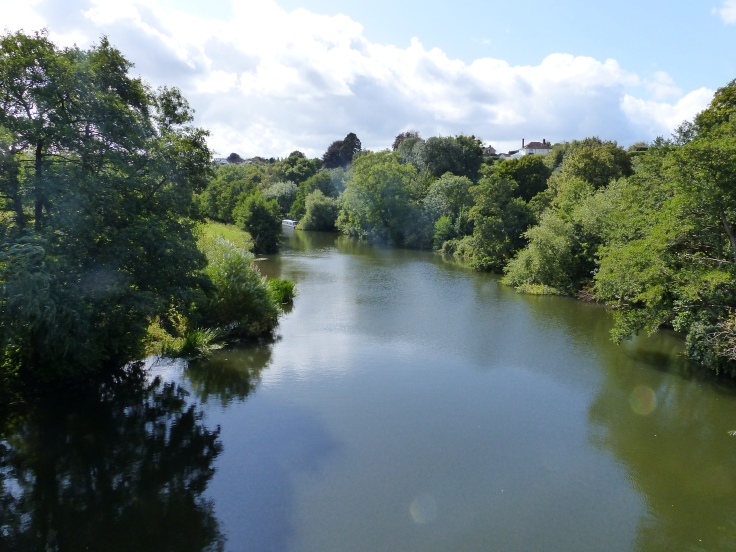 As we neared Bath, the rail path ended, but we had a tow path beside a canal, so pedalled into the city beside the water. 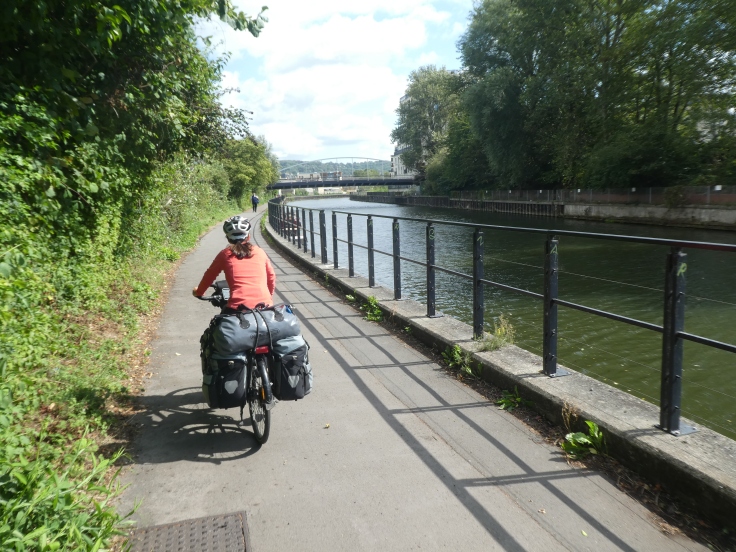 One of the first things I noticed as we entered the city was the beautiful buildings. That beautiful Bath stone gives a view of the city in gorgeous sepia that’s quite unique. We stopped in Queen Square to have some lunch and watched two older men having a very serious game of boules, with scores being kept and measuring tapes being used. It was lovely to sit in a beautiful park, surrounded by those gorgeous buildings, watching people enjoying the space and enjoying their day.

We made our way back down the street to the little coach cottage that is our lodgings for a couple of nights. We came to Bath on our last cycle tour a few years ago and loved it, only wishing we could have spent more time here. So we’ll have a stop over this time so we can have another day to roam this beautiful city again. After a post-ride cuppa we began this return roam with a stroll around the town and alongside the river on our way to get supplies. It’s still a beautiful city and we still love it. 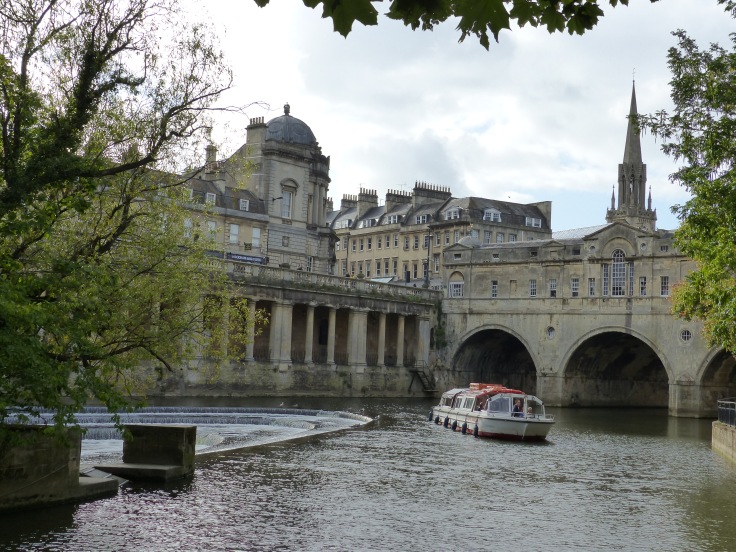 Today was another great day. Simply bonza! It was only a short ride but that made it very relaxed, with time to sit and enjoy a tea room, time to tootle along a very pleasant, very easy going path with no rush, passing or meeting more friendly people along the way. Then, we had a beautiful place to arrive in, which just capped off an already lovely, leisurely day. Once again, “I love it!” was my call as we pedalled along, which was followed up by, “Beautiful” as we strolled the streets of Bath this evening. On the gusts and gales, we blew out of Bristol, breezed into Bath and continue to be bowled over by it all!

Time in the saddle: 1 hour 54 minutes 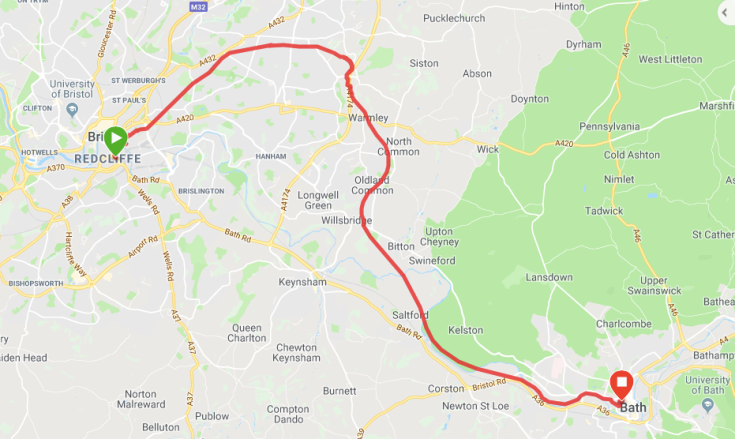 2 thoughts on “Bristol To Bath…Bonza!”