Here we are. We’re back in England. To get here, we had to get up to the River Wye, on a road that’s the main thoroughfare for traffic between England and Wales, cross the river on a huge bridge and then get back out of that main thoroughfare on the other side. If I’d been a New Zealander I would have done the Haka to psyche myself up for it. I was expecting to be in thick traffic, have to navigate roundabouts and intersections and then find our way out through traffic on the other side. But…it wasn’t like that all. Not at all.

We rode out of Newport and it began just as I was expecting. It seemed my predictions were going to be right. We were beside a very, very busy highway, with cars and trucks whizzing past. Thankfully, we were on a path beside the road, but it was so noisy and so much traffic that it felt like we were right in amongst it. We pedalled furiously along the path, then up a ramp to get over the highway and on again, pedalling, pedalling right beside the whizzing, whizzing. Then the path ran out. No path. Just highway. Were we going to have to ride on that highway? No siree, we were not about to do that. We saw a road that looked like it would be quieter and a consultation of the map told us it was indeed an alternative and not only that, it was a marked cycle route. Sorted.

A quick sprint across the highway and we were on the quieter road. What a fabulous ride this turned into. It was chalk and cheese to what we’d just had. From that busy, noisy highway, we were now on lovely quiet roads, lined with hedges, passing through little villages. It was fabulous. 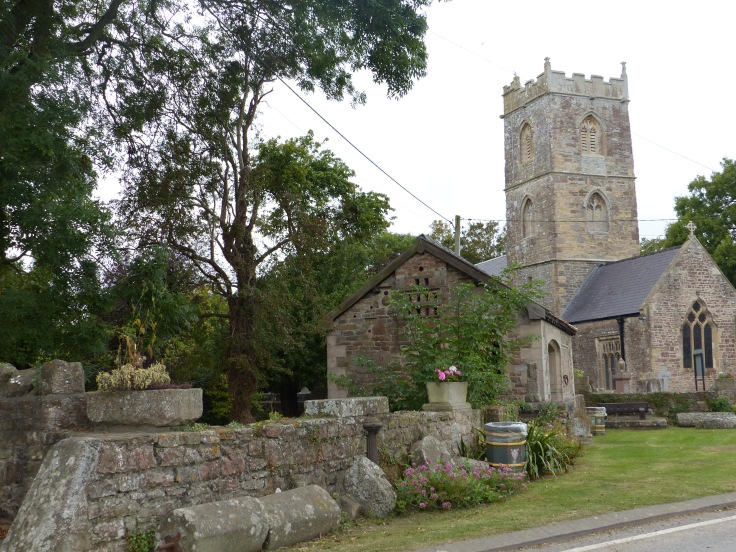 Then the road became gravel and, even though my feelings about riding on gravel have been known for some time, this one didn’t bother me at all. It continued to be a lovely ride, in peace and quiet and even though we could see the motorway ahead, in the distance, we could easily forget it was there and simply lose ourselves in the quiet, country-like surroundings. 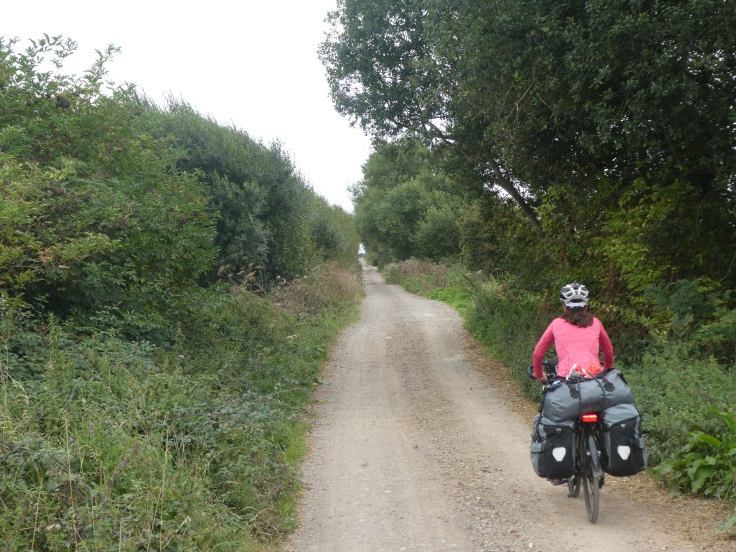 We eventually had to rejoin a proper road, but the traffic was light and we could pedal along with no drama at all. Every now and again we would have a path to ride on and along one of them, we had a low tunnel to ride through. Steve went first and ducked his head and when I came behind him, I thought you could have just about slid a playing card between the top of his helmet and the top of the tunnel, he was that close. Of course, even though he’d almost scraped along the top of that tunnel, despite bending down with all the skill of a royal bow, I still asked him to go back and do it again so I could take a picture! He obliged and reappeared unscathed again. We then rode into the little town of Caldicot, found a bench and parked ourselves for elevenses.

We pedalled on and our route took us through a park and all of a sudden we had a castle in front of us. Didn’t know that was there! We stopped for a look at what we discovered was Caldicot Castle. It has been home to someone for over 800 years and in that time has been a fortress, a manor house, a country residence and an apartment block. I think those different forms of residence are a beautiful timeline of architectural history right there! It was great to wander in and around and it was still fully enclosed inside, with gardens and the castle walls and the 13th century Keep, which is the oldest part of the castle. 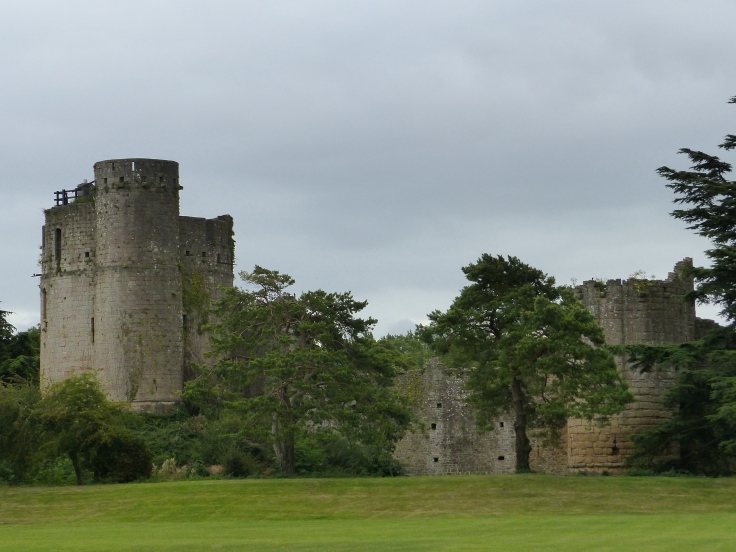 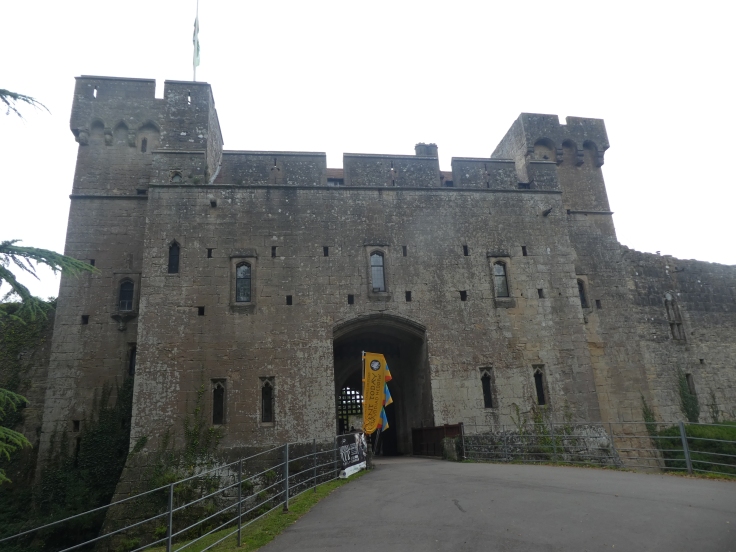 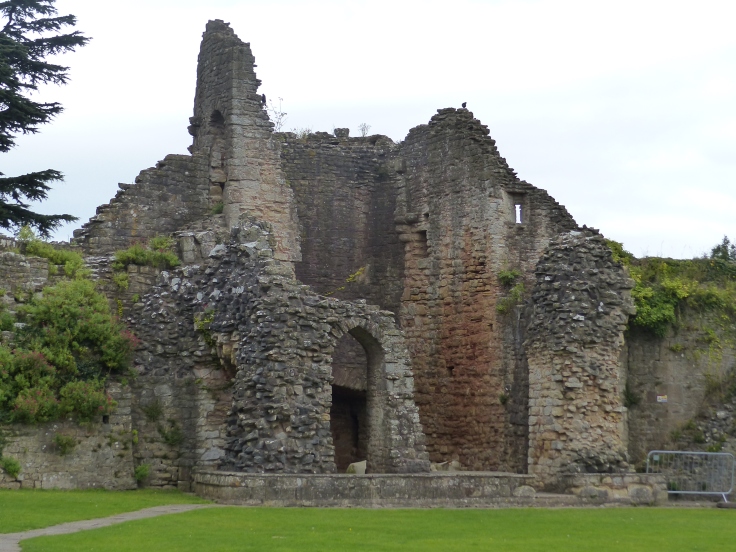 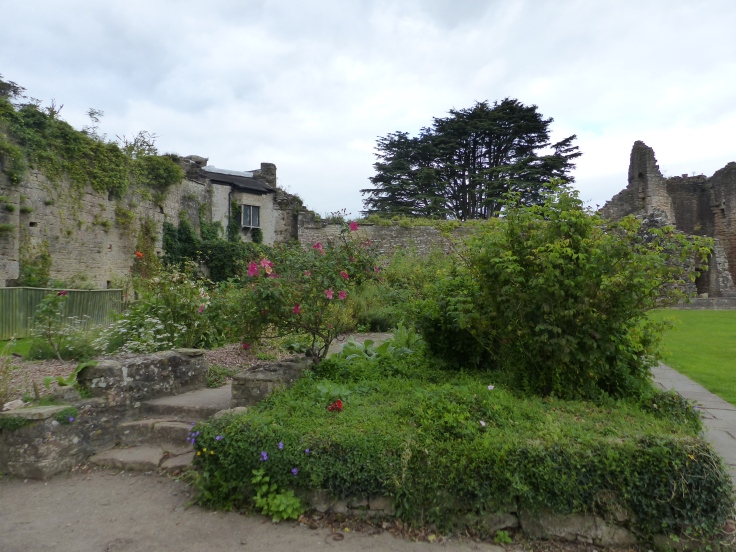 On we went, along more lovely country roads, beside stone walls, stone cottages, through villages and along quiet single lane roads between hedgerows.  We could see the bridge we had to cross, way over there in the distance and it was getting closer. Now, I thought, our peace and quiet is about to come to an end and things are going to get very busy indeed.

We pedalled up some hills, around a corner and onto a path beside a road.

Well this doesn’t look too bad. We followed the path and up and onto the bridge we went. It seemed to go on forever.

“This isn’t the big one,” Steve told me, “this is just the precursor. The big one is up there, over that hill.” I looked and could see an incline in the distance. On we went and up we went and we were on “the big one”. This one seemed to go on forever too! We were up above the water and bouncing from the movement of the suspension bridge as all the trucks and traffic went along beside us. There was also a separate bridge, that was a designated motorway, so a lot of the traffic was on that, making it a little less busy beside us. We were now on the Severn Bridge, which turned out to be 1.6 km long. I was just glad the wind wasn’t too strong, because it would have been a bumpy and blowy ride if we’d had that to contend with as well.

When we got to the other side, we were on another quiet back road and then onto cycle paths. Surely it couldn’t have been that easy!? There I was, thinking we’d be battling traffic and the ride had been absolutely lovely after we left the highway behind early on. Then the bridge crossing was on a path that made it easy peasy and now we were still on nice quiet roads and paths. Nothing to worry about after all! 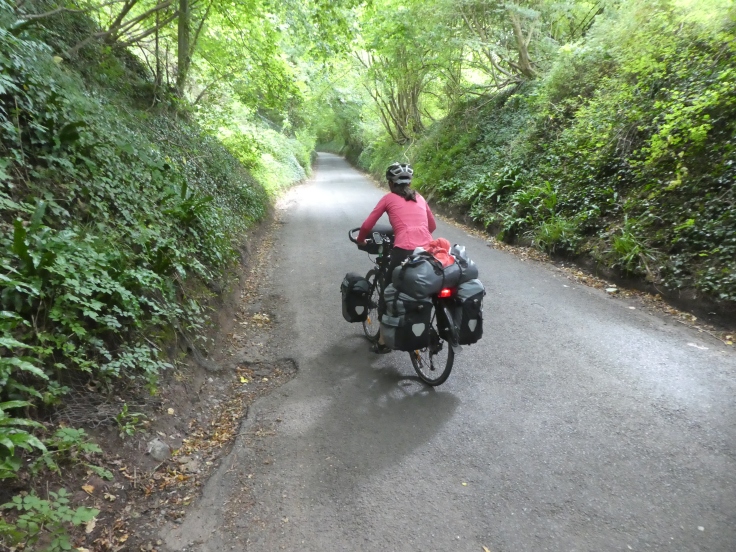 We wheeled on, now on English soil, but once again we had some countryside, quiet roads, nice little villages and no drama at all with traffic. Then, we hit our first major hill. We’d had some hills already, but this one looked like it was going to be a bit of a monster. At the bottom, we passed a couple of fellas on bikes who’d stopped at the side of the road.  They had some gear on the back and  looked like they were on a tour too. We said hello as we passed and then started the grind up that slope. It was one of those trickster hills, the kind that looks like it’s about to come to an end, but then you round a corner and it just keeps going. It was a slog, no two ways about it. When I got to the top and waited for Steve, one of the fellas we’d seen, stopped to wait for his companion and we got chatting. They were on a week’s tour but he was about to go to Scotland to ride for a month so he was riding up some hills as training for the climbing he’d have to do in Scotland. When our respective bicycle buddies arrived, we all chatted for a while and they told us they’d been camping the night before beside a river, only to find late last night that things felt a bit wet. They discovered they had camped beside a tidal river and it was now flowing into their tents. They said they lost some of their gear, when it floated away and they had to scurry to get to higher ground. We commiserated, even though they were having a laugh about it now. They were two nice, friendly fellow pedallers and it was nice to chat to them while we all caught our breath. We checked the data and that hill was an 18% gradient. No wonder it was a slugfest. 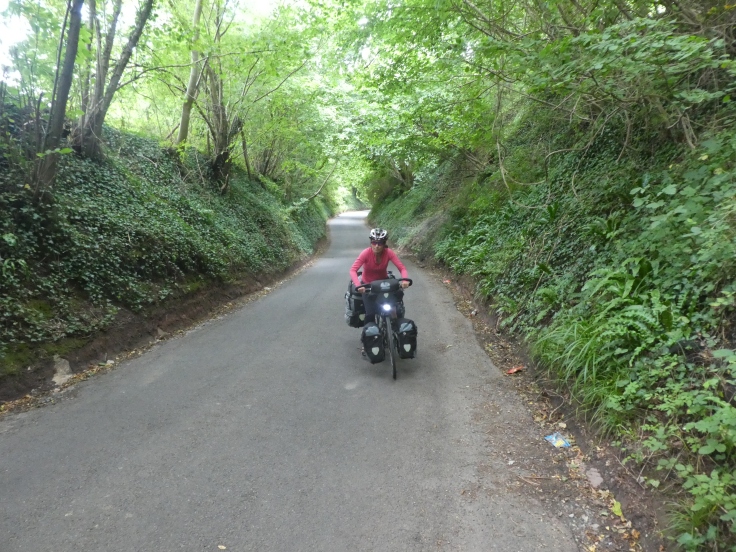 Our onward ride was a mix of road and paths, but the drivers were brilliant once again. Then the path we were on went up. Very much up. It was even steeper than the hill we’d just climbed up. Not as long but most definitely steeper. After some rest stops and slow wobble swerves, I got to the top and waited for Steve. When he appeared, he said he’d had to get off and push. That’s how steep it was. We don’t know what the gradient was because Steve said the GPS didn’t register because he was going too slow. That’s how steep it was!

The ride into Bristol took us through some parks and on paths again and we stopped in one of the parks for a late lunch. We were both peckish indeed after a longish ride and some work to do along the way.  Into the centre of Bristol we went and were pleasantly surprised to find a network of cycle lanes and cycle paths all through the city, so we managed to dodge the traffic once again. We found some lodgings and downed more than one post-ride cuppa because it had been hard work and we were parched!

Well, that ride turned out to be great! Not what I was expecting at all. Apart from the busy start, we had lovely country roads, little towns and villages, some countryside and then paths, lanes or quiet roads most of the day. It was terrific and a pleasant surprise indeed. We made Bristol our pit stop so we can pick up the Bristol to Bath Railway Path for our onward pedal, although we might take some time to have a look at Bristol before we pedal off. We’ll see. No plans. Just take the day as it comes. Another great day in the bag, even though we travelled from city to city, because what we had in between was fab. We are back in merry ol’ England and merry I continue to be!

Time in the saddle: 4 hours 26 minutes

Weather: chilly, then warm, then chilly, grey, then sunny, then grey. 18C 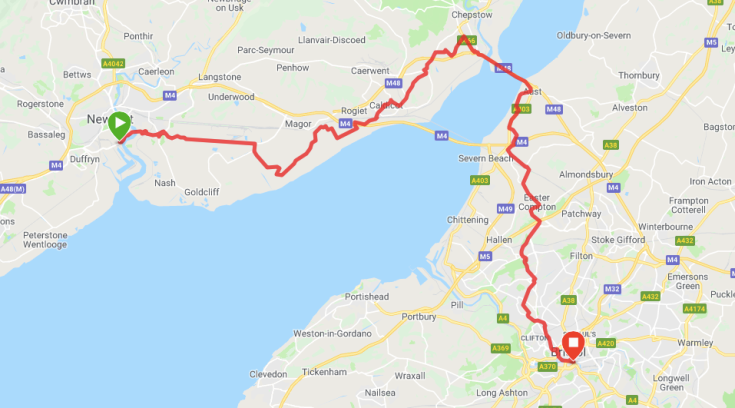