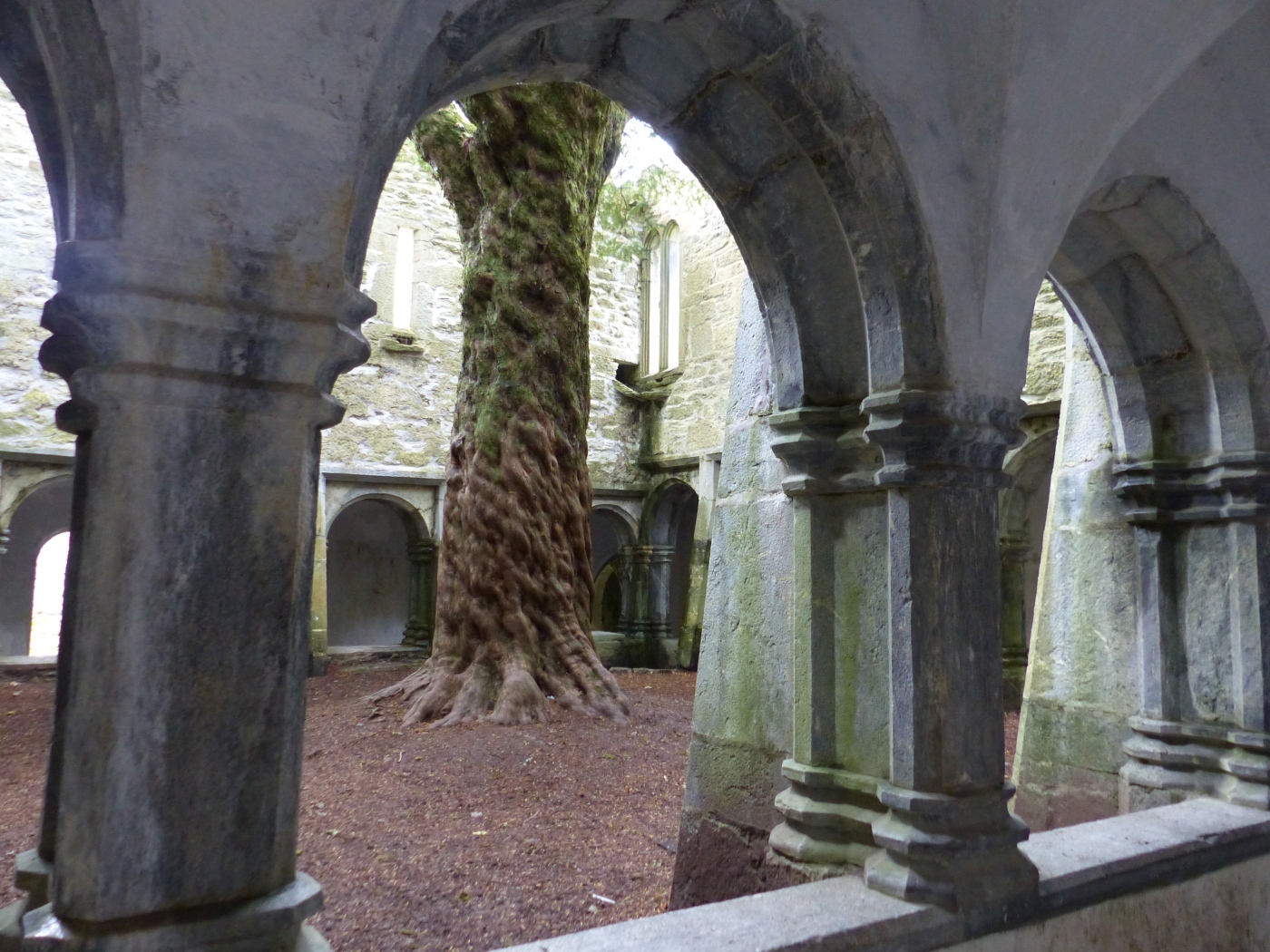 Ever been somewhere and had that feeling where you just want to keep looking over your shoulder? Ever stood in a room and felt a bit of a shiver and you want to turn around and check behind you? Ever had that kind of creepy feeling? Or is it just me?

I started today with a quick run. I haven’t been able to find anywhere to run lately, but the hotel we were in had a gym, so I settled for the treadmill and knocked off a few K’s before we set off. We hopped on the bikes again this morning and went for a ride through Killarney National Park. We started at Ross Castle, which was built in the 15th century and sits beside Lough Leane. Once again, we were one of the first in the car park and started off at a time when we could count more ducks than people.

After a bit of road riding, we were on traffic free paths in the National Park and it was a fantastic place to ride. We went through forests, then beside the lake and had the added fun of sloshing through mud and it was all a fabulous start to the day.

We came upon the ruins of Muckross Friary and parked the bikes outside to have a look. We arrived just as another couple on bikes were leaving and the man told us about some stairs inside that we could climb to the roof. His accent was unmistakable. “Are you over here from New Zealand?” I asked.

We stopped and chatted for quite a while and it was lovely to meet Paul and Fiona and we swapped stories of travels and life at home.

We took ourselves into the Friary, which was founded in 1445. It was once home to a community of Observantine Franciscans and was then suppressed by Henry VIII in 1541, before being re-established in 1612. The friars were eventually driven out by the Cromwellians in 1652.

This place was absolutely amazing. I don’t think I’ve been somewhere quite like it. It was a ruin, but it was still so complete and parts of it so intact, that it felt like walking through habitable rooms. The corridors and archways were stunning and even the intricate work on the ceilings was still visible. 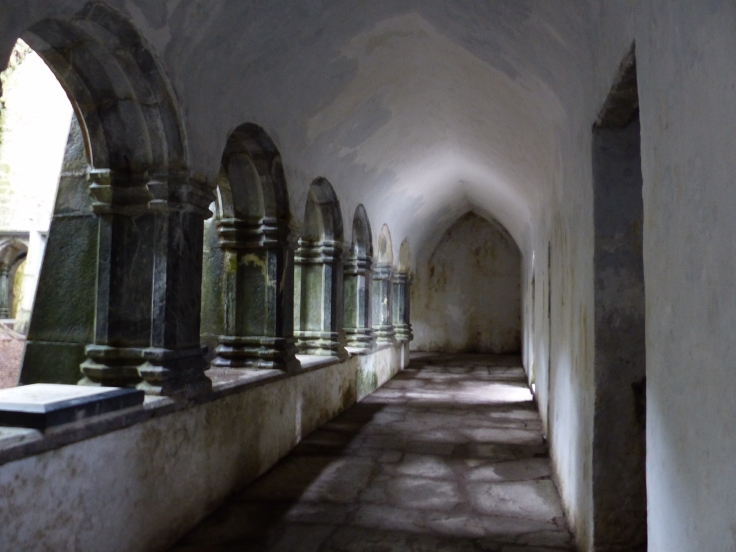 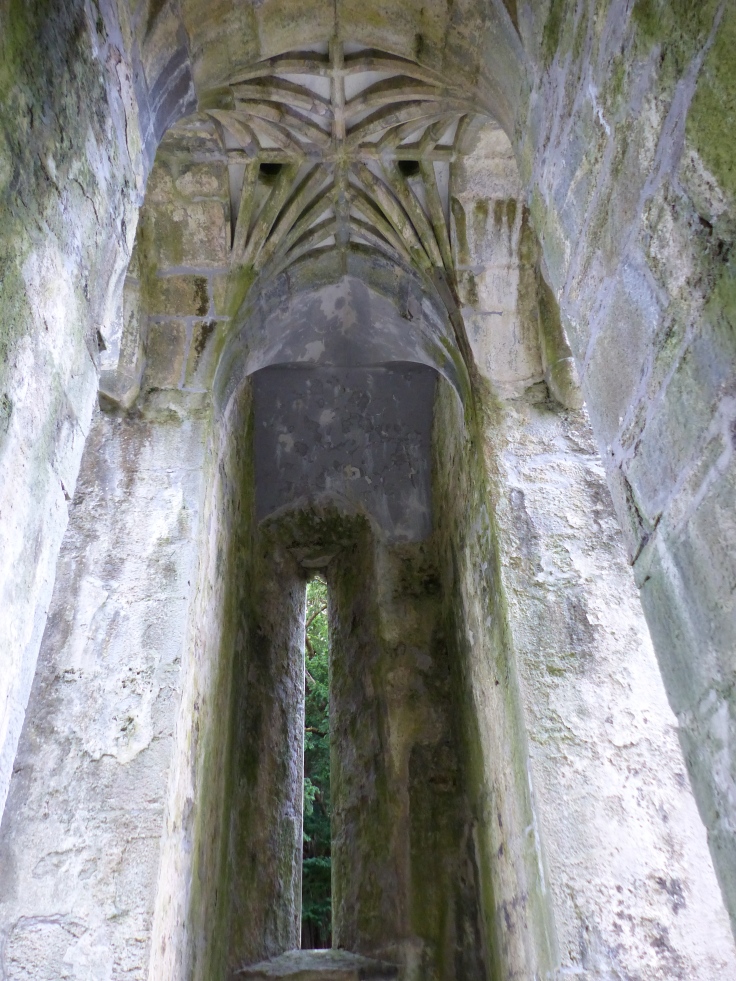 We walked from room to room and then I climbed the narrow stone steps, up the dark, spiral staircase and came out in what would have been the rooms on the second storey of the building. The fireplace was still there, still intact and on the other side, the chimney was still all there and the fireplace so complete, you could have easily lit a fire in there today. 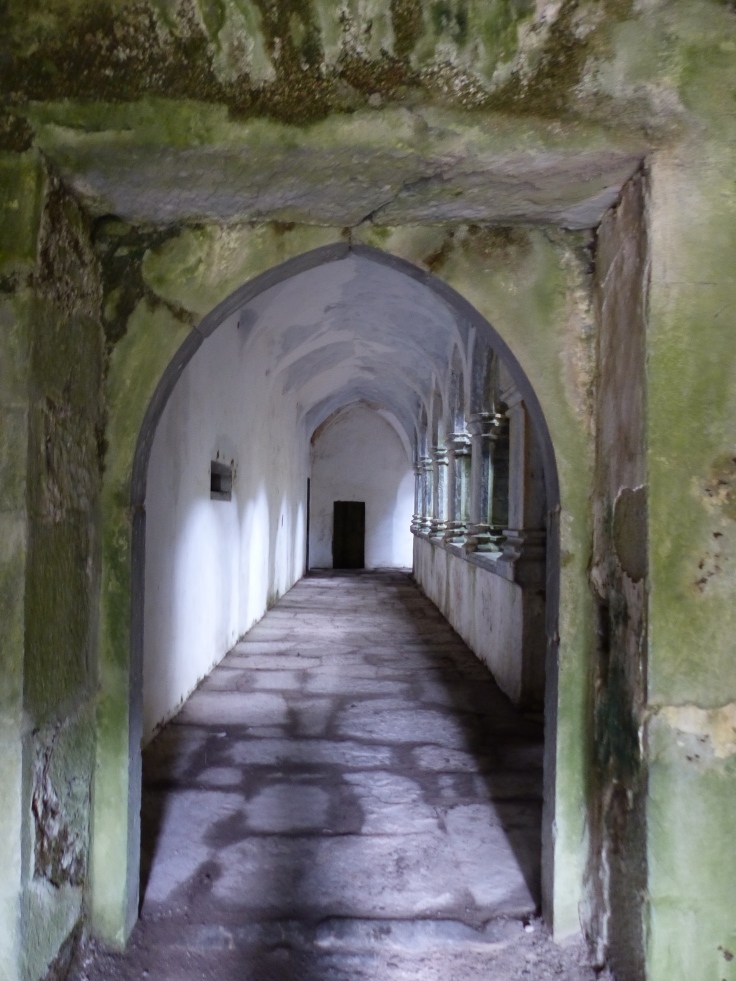 I saw another set of steps, going higher still, so I climbed up and found a room with a wooden door. I was up there on my own. There had been a couple of other people walking around, but now I was on the top level with no one around. I walked into the room, which didn’t have as much light coming into it as the open, roofless rooms below and I stood and looked around. The walls were intact, there were cobwebs hanging from the stonework and…I looked over my shoulder. I shivered and turned around again. It was an absolutely amazing place to be, but…that room was creepy! It was like being in a dark, stone, attic room, on my own and my overactive imagination got the better of me. It was just so complete, like no other ruin we’ve seen, so it was like one of those friars could have walked through the door again. Get a grip Heidi!

I found my way back down the stairs, found Steve who had been exploring downstairs and took him up to show him where I’d been. We kept wandering and exploring and the whole place was just a warren of rooms and staircases and we both said, “This is very cool!” We spent ages there, wandering and looking in the different rooms and just marvelling at how preserved it all was. A fabulous find and an incredible place to explore.

We eventually pedalled on, beside the lake and through the sections of forest again and came to Muckross House. This was built between 1839-1843 and stands on the edge of Muckross Lake. Today it’s a museum.

We pedalled on, this time into the rain and had a flowing creek beside us. We parked the bikes and took to the paths for a ramble up to Torc Waterfall. This was a beautiful place to walk, through the trees, beside the creek and the colours were amazing. The green was almost iridescent.

When we made our way back down, we found a rock to park ourselves for elevenses before riding on.

Back we went, along the paths and roads through the National Park, past Killarney House and Gardens, built in the 1720’s. The house was very grand looking but was actually once the stable block of a French chateau style mansion. That house was nearly destroyed by fire in 1913, so the stable block was remodelled into another residence, between 1913-15. 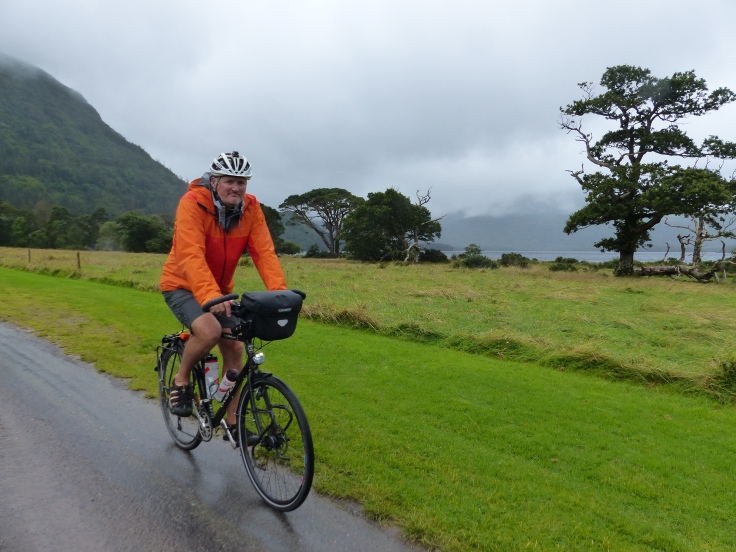 We pedalled on, along paths, beside another lake, with views of Ross Castle in the distance. The rain stopped and then we hit another milestone. We ticked over our 4000th kilometre.

When we got back to the car park, it was to find, once again, that it was now completely full. It seems we’ve managed to time our rides just right, to beat the crowds. We loaded up the bikes and hit the road in the direction of Dingle. We passed through green farmland, coastline, up narrow country roads. Then we passed through the town of Castlemaine. A sign at the entry to the town said, ‘Welcome to Castlemaine, the home of The Wild Colonial Boy.’ Well now, didn’t that spark a bit of controversy! The Wild Colonial Boy is (we thought) an Australian Bush Ballad and we first learnt it in Primary School.

“I thought it was a bushranger song,” he said, “maybe it’s not.”

I got to Googling as we drove along and…well…what we discovered! Now, this might not be new to some other folks out there, but it was new to us…we found that the lyrics we’d learnt were not the original lyrics at all. Our version goes:

There was a wild colonial boy, Jack Doolan was his name

Of poor and honest patents, he was born in Castlemaine…

There was no mention of Ireland at all, hence me thinking it was Castlemaine in Australia.

Now, having seen that sign, we got to researching that song that we thought we knew and what did we find…it’s Irish, not Australian at all! The original lyrics are:

There was a wild colonial boy, Jack Duggan was his name

He was born and raised in Ireland, in a place called Castlemaine…

We’d been duped! Hornswoggled! Sold a furphy! Our song wasn’t ours at all and Jack Doolan wasn’t even Jack Doolan, he was John Duggan and there’s a whole story behind that too! Then…just to add to that controversy I found another set of lyrics that went like this:

There was a Wild Colonial Boy, Jack Doolin was his name

He was born and bred in Victoria, in a place called Castlemaine…

We’d taken that Irish song and pinched it! Not only that, we’d Australianised it and ever since we were little tackers, we’ve been singing a song that was snatched, snaffled, nabbed and knocked off! The things we learn!

Well that of course got us started, so after singing our version, we began on a catalogue of Aussie Bush Ballads and motored along, singing at the top of our voices, as tuneless as can be, as the Irish countryside passed us by out of the window.

I’m sure the folks of Dingle heard us pair of drongos coming a mile off, but we quietened down as we set out for a quick roam through the streets. Dingle was another nice little harbour side town, with those pretty painted buildings, but it was absolutely heaving with people. We did a loop around the town, down to the harbour and then made tracks, as the day was drawing in.

We tootled back up the peninsula and arrived in Tralee, where we’d found some digs for the night, gathered some supplies and called it a day. What a fantastic day. I think it was one of the most enjoyable rides we’ve had. It wasn’t particularly long and even though we were only in the saddle for about an hour and a half, we were out for over three hours, by the time we explored and rambled and stopped to look at things. It had a bit of everything – a great path to ride on, fabulous scenery and amazing places to see. Then, we had some learning too, what with the revelation that an iconic Aussie ditty isn’t so fair dinkum after all! At least we can say we have now been through the original Castlemaine! We continue to bag some winners of days as we make our way around, with some fantastic discoveries and super places to explore. Now I might just have to spend some time doing some extra research…if I find out Waltzing Matilda is actually Scottish, I think I’ll have to give up Vegemite!

Time in the saddle: 1 hour 31 minutes

Weather: grey, then rainy, then just grey again, nice and mild though, about 18C

5 thoughts on “Ooh, That Was Creepy”