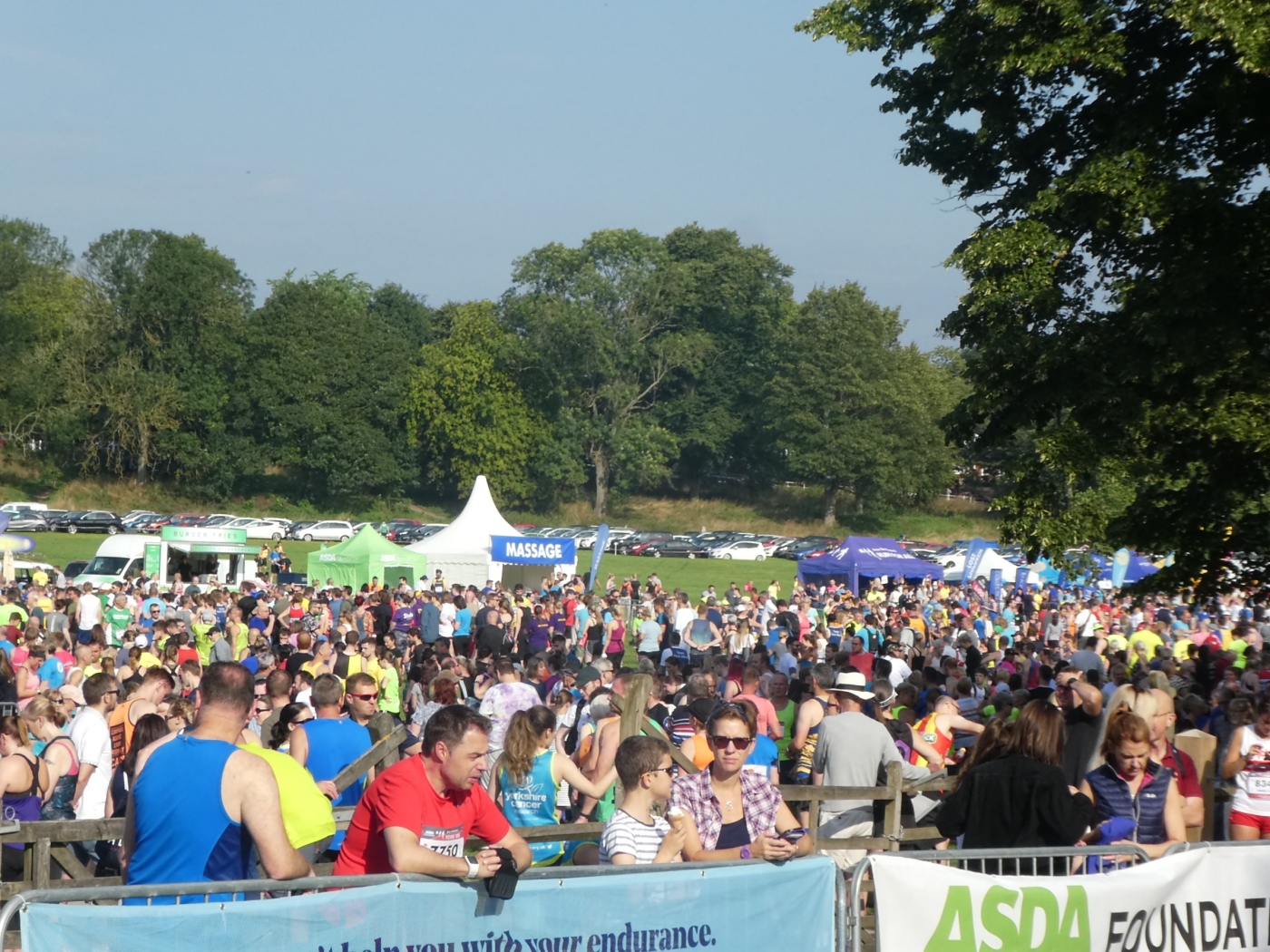 Yesterday’s attempt at roaming in York wasn’t too successful on account of the sardines situation – that is, being packed as tightly as aforementioned sardines, in amongst all our fellow visitors and tourists in this lovely city. Today I got to see the city again, in another crowd, but this time it was great fun!

Today was the York 10K run, so I pinned on my number and rocked up to the start line at the same York Racecourse that we’d ridden through yesterday.

The morning was absolutely spectacular. It was sunny and warm and already hitting 20C before the air horn sounded at 9:30 to set us off into the streets. There were 6000 runners and the course was great because it took us through the centre of York, past the Minster and along the cobbles, over bridges, through some outer neighbourhoods and it was a great way to see the city again…so much easier with the roads closed! We had the roads to ourselves, so the great sea of runners weaved along the streets of York and I looked this way and that, taking in the sights, while that fabulous sun shone down on us. It was a bit tricky with so many runners because the streets were narrow and there were lots of twists and turns and corners, so it was hard to actually hit a consistent pace or rhythm because I was constantly on the look out not to trip on the heels of another runner. Even with that crowd of runners and a very congested route, with us all trying to fit into the narrow streets, it was fantastic. The support on the side of the road was great too, with the wonderful volunteers shouting encouragement and a choir singing in one spot and drummers playing in another spot and the spectators clapping and giving us all a “Keep going!”  and “Well done!” as we trotted past. I think my favourite encouraging comment came from a man who obviously thought we were feeling the heat, running on such a warm morning, because as I went past I heard him call to us, “A nice cold winter’s day. Nice and cold!” I think he was encouraging us to imagine it being cooler, to help us deal with the “heat”! That put another smile on my dial and I had many of them for that whole 10 km. We finished at the racecourse again and a nice little downhill to finish, which was lovely and there ended my tour of York, in a crowd, but a brilliant crowd! At 46:52 it certainly wasn’t my quickest 10K but it was certainly one of the most fun! It was also fabulous to be running on a lovely warm morning. I noticed the headline in The York Press said, “Thousands of runners battle the heat in York 10K” then the article began, “To make the 10 kilometre event even tougher, runners pounded York’s streets in temperatures of around 22C.” Well, I guess heat is all relative because 22C isn’t hot and isn’t a battle to run in, it’s just lovely! A perfect morning for a run and a bit of fun on a Sunday.

After a post-run cuppa and a spruce up, with the sun still shining, we decided to have a less crowded roam than yesterday and we took ourselves off to a local National Trust property for a look around. Goddard’s House and Garden was home to the Terry family, as in Terry’s chocolates, makers of the well known Chocolate Orange – those Terry’s. The house was built in the 1920’s and we strolled through the various rooms and out into the gardens, learning a little of the family as we went.

The children had their “recreation room” so they could be kept out of the way of the adults. The designer of the house suggested having a folding wall between the drawing room and the recreation room, but Mr Terry vetoed that idea and opted for a solid wall to keep those kids where they couldn’t be heard! He was concerned with the children’s health though and requested the newly invented “vita” glass be used in the day nursery, which was a glass that allowed UV rays through, helping to prevent vitamin D deficiency and ricketts.

The family consisted of Noel and Kathleen Terry and Goddard’s was their first home, commissioning the build themselves and being very involved in the design and features. They had four children, Peter, Kenneth, Richard and Betty. Peter, the eldest went on to be the Managing Director of the company, Kenneth was killed in the Second World War and Richard decided to be a farmer instead of going into the family business. Betty is still alive, at 95 years old. 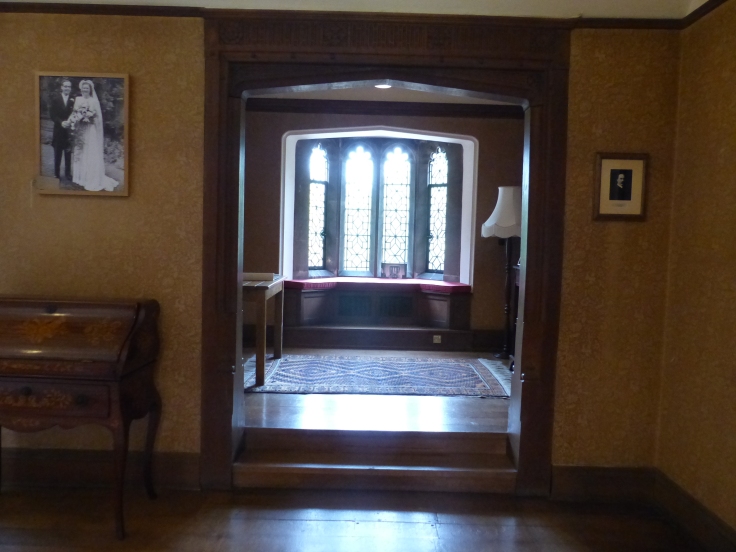 It was interesting strolling around the house and then out into the expansive gardens, with their meandering paths, lawn tennis court, croquet lawn and orchard. The sun still shone and it was hot and fabulous, so strolling around the garden was lovely. We finally took ourselves inside to the nice little cafe within the house, to have a spot of lunch complete with rose and chandelier. 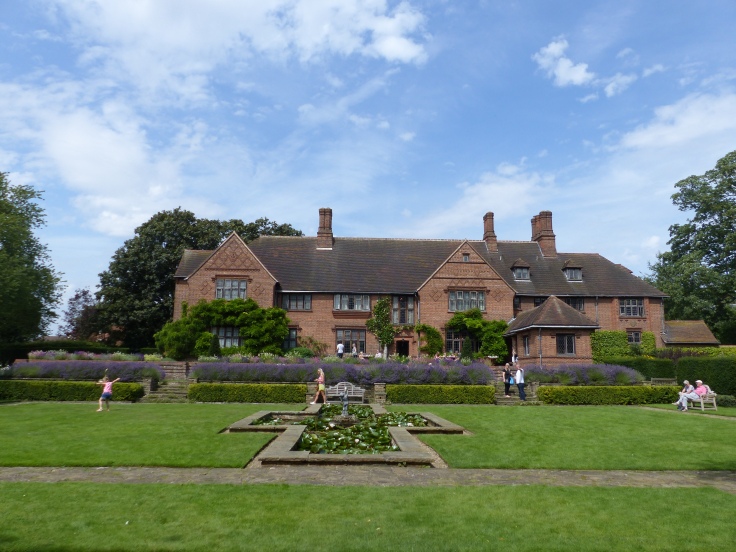 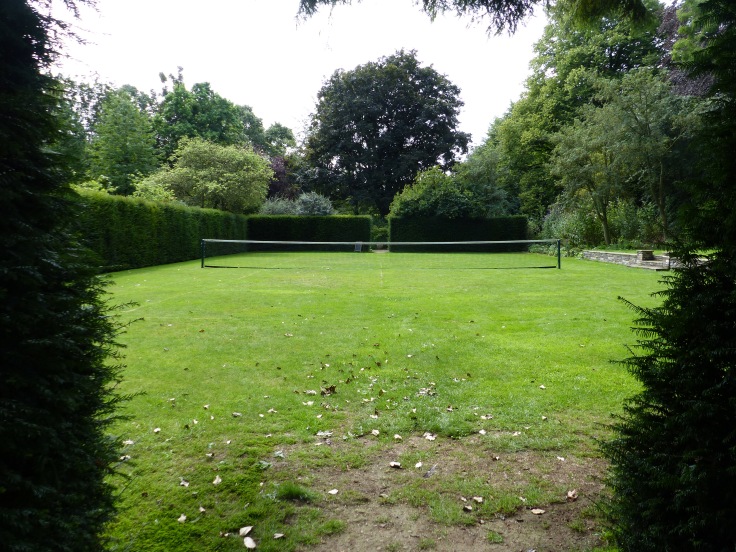 As we walked back, we passed another interesting piece of town history, just there on the side of the footpath. It was the remaining walls of a Pinfold, or Pound, which was originally an enclosure for cattle that had strayed. They were put in there until a fine was paid to release them. These Pinfolds were common in the 17th-19th centuries and were usually on the side of roads or areas of common grazing. I love that we see pieces of history everywhere here, in the buildings and landscape and now, just a piece of wall on the side of the path, that had its own story to tell.

We planned to take the bikes out for another ride into the centre of York, but…then it rained. The lovely sunny day stopped and down came the rain. Very heavy, fair dinkum, soaking rain. We got caught in it as we walked, but we were prepared with our brollies. Since we’ve ridden in rain so many times when we didn’t have a choice, we decided that today we did have a choice, so we decided not to! We took ourselves back to our room, listened to the thunder and began to look at maps for our onward ride tomorrow.

It was a super Sunday! It was sunny and warm most of the day, I had a fun 10K run around York  and we visited a lovely, interesting house and garden. A top day. Hopefully the rain and thunder will do its thing today and leave us in peace tomorrow when we take to the wheels again. Thanks York, it was another memorable visit and now on we go, to continue our discoveries and learning and continue to…well…just have an amazing adventure! Pedal on!

4 thoughts on “When A Crowd Can Be Fun”