The fog found us again and the surroundings were cloaked in mist this morning, which actually made Goole look quite nice. It soon cleared, we packed up and hit the road, back on the Trans Pennine Trail. 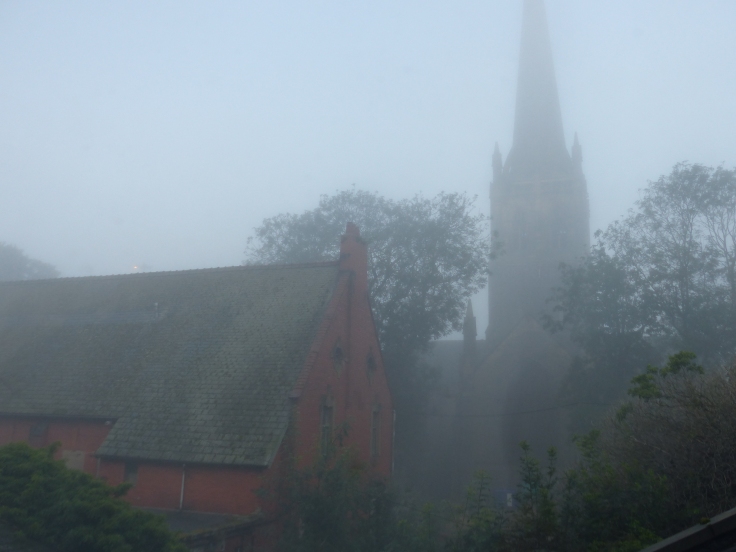 We were beside roads and then through some more lovely little villages. Through Knedlington and Asselby and then Barmby on the Marsh. We rode over Barmby Lock and then we were very much off road. Through some gates and we were once again riding amongst sheep and cows, through bumpy paddocks, but it was great. The sun was shining and it was warming up and we pedalled along, in the peace of the paddocks, with only the four legged locals looking bemused by our two-wheeled presence. It was lovely to be riding so far from traffic, but I must say it was far from easy. Supreme balance was required on the narrow strip of dirt running through the grass and one slight veer to the left or right and a tyre caught on the lip of that track and major tipping and tilting happened. A few times I had to put foot on ground, as the bike swerved and wobbled as it caught the edge of the track. In the end, I just went not only off road, but off track and just bounced and bumped along the paddock itself, because at least I’d stay upright. 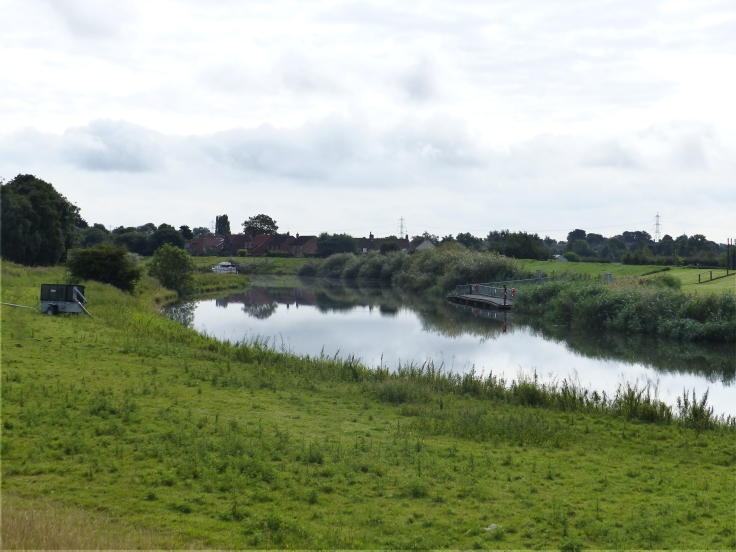 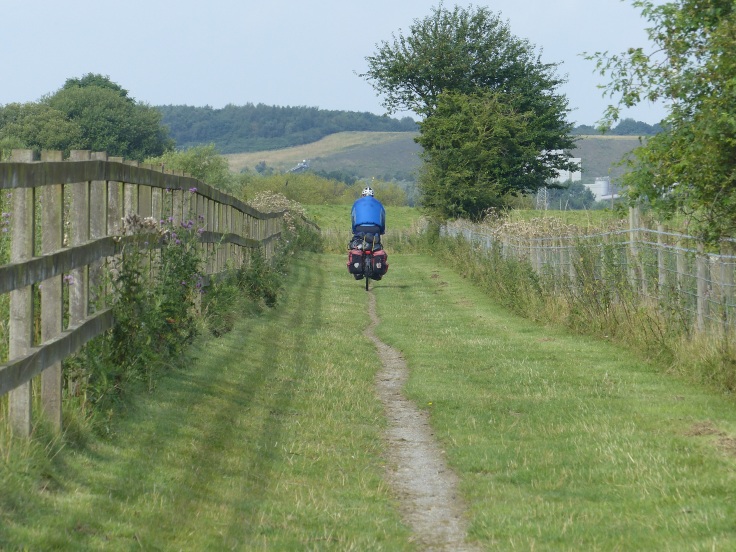 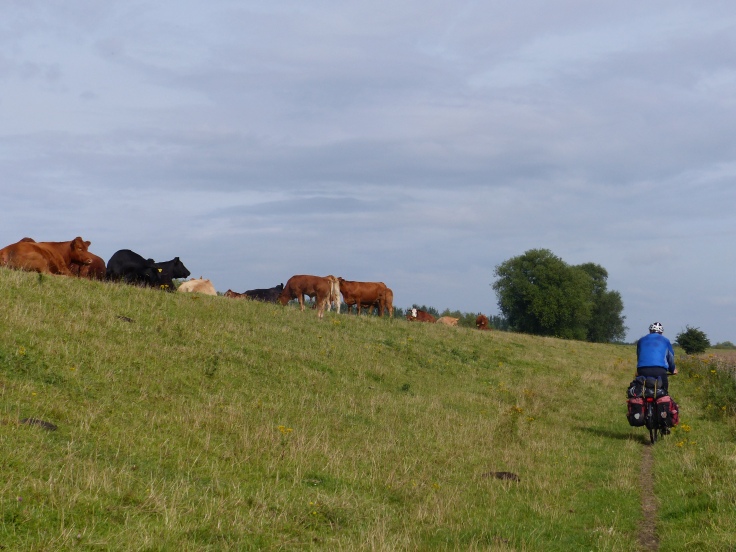 The path brought us to Selby bridge, so we took a short detour into the town and found a bench in the park for elevenses. It was a lovely place to sit, with just the local pigeons paying us a visit.

On the ride out, we were along another dirt track, running beside what looked to be the old town walls. As we bumped along, there was a lady in front of us walking a little bull terrier that was walking on top of the wall, beside her. As we rode past, I heard her say, “Ah, that takes me back.” I stopped and we chatted for a while and she told me she had cycled around most of Britain. She wished me well, but before I pedalled off, I asked if I could introduce myself to her dog. This little bull terrier had the sweetest, kindest face and she padded across the wall to me, wagged her tail and then rested her face in my hands for a pat. It was lovely, to stop and talk to this friendly lady, while patting her sweet little pooch. Then as we rode on, another cyclist rode beside us and chatted to us, asking about where we were going and telling us about some things in the area. “I’m jealous,” he said, “I’d like to do what you’re doing, but the wife wouldn’t do it and it’s a long time away from home if I go.” I felt a bit sorry that he wasn’t doing something he’d really like to do. Still, he was out on his road bike, soaking up the scenery and loving that all the same. It was nice to meet some more friendly, chatty locals.

We reached the outskirts of York and rode in on the Solar System Greenway. This is a fantastic path that has models of the planets beside the path, spaced at intervals to scale. You really get a great sense of distances and size of things out there in space. We also saw the “Trust Hut” another path-side table with drinks and baking available for passing walkers or cyclists with just a tin to put money in. It’s such a lovely idea. 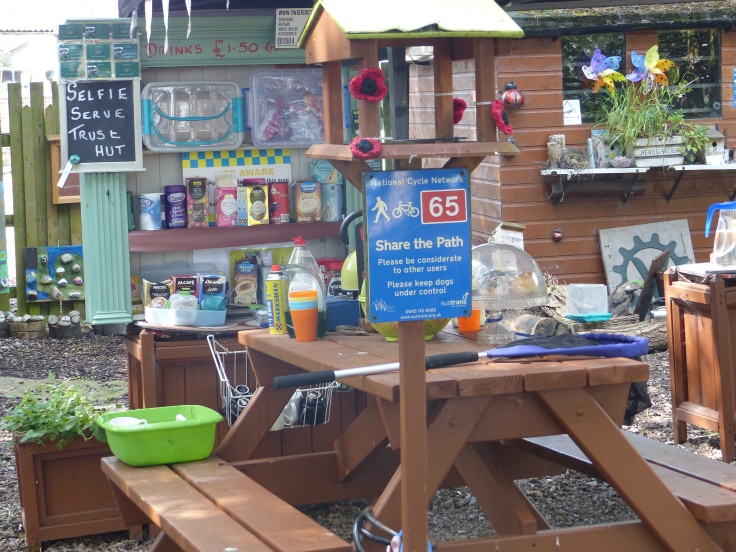 We were heading to York and this is another place we are revisiting from our last trip. We visited York at the end of the time when we had driven a van around for a couple of weeks, so we didn’t ride in. I had a solo day in York, while Steve was off returning the van, so I saw a bit of the city, but Steve hadn’t seen as much, so we’re making a return visit. Last time we rode out along the Solar System path and you can see some photos of the path and riding past the planets here.

When the path ended, we rode in through the York Racecourse. This was great and something I don’t think you’d ever see at Flemington. The racecourse is huge and it was open to the public to use as a space for walking, cycling and general recreation. There were people running around the path or cycling around, people walking their dogs on the grass and kids kicking soccer balls. It was great to see it being used that way and, just quietly, I think a far better use of the space than making poor horses run around it.

We found our pitstop, just outside the city and then took a ride in to have another look at York. I absolutely loved York last time, it’s a beautiful city, so I was looking forward to another roam through its gorgeous historic streets and lanes. We parked the bikes and then set off to roam. We tried…and failed. The streets were absolutely HEAVING with people. I mean, shoulder-to-shoulder, toe-to-heel, nose-to-back, packed with people. It was like being trapped in a human undertow. We were sucked along with the tide of bodies and, being at about armpit level, I could see up, but not forward and I was just being dragged along in the rapids of arms and legs. I know we were in The Shambles and I know there were some lovely cobbled streets, because I could see them underfoot, but I couldn’t spot much else. Taking photos was impossible, because all I would have captured was the back of people in front of me.

When I eventually saw a side street, to paddle my way out of the current, Steve came alongside. “Nope, I can’t be doing with this,” I said.

We ducked and dodged through the crowds and made our way to York Minster where we had a bit of clear air. It was the first thing I was able to get a snap of. Then, down a slightly less crowded street and we walked under Micklegate Bar, the original city gate, but we really didn’t want to dive back into that human riptide, so we cut our losses and headed back to the bikes and just gathered our daily supplies.

I’m really glad we’d had a prior visit to York because it wasn’t anywhere near as crowded then and I had a great walking tour and saw the city at a leisurely pace. If today had been our only experience, it wouldn’t have been a positive one because we wouldn’t have had a chance to see anything. York is still a beautiful city, with beautiful historic buildings and cobbled streets. If you would like to see some photos from our last visit to York and read some fun facts and stories that I learned on my walk around the city, you can read about it here.

Today was another great ride and best of all the sun shone all day! It was sunny and hot and brilliant after yesterday’s soggy day in the rain. We saw some more nice little villages and had a peaceful, off road path and then a nice flat path into York. York was still lovely, just a bit impossible to see above the waves of people! We are here again tomorrow, so maybe we will get to see a bit more then. I might just find myself some floaties or a life ring, or a large inflatable crocodile to sit on, to help me swim through the rapids of people and fight the human undertow!

Time in the saddle: 3 hours 29 minutes 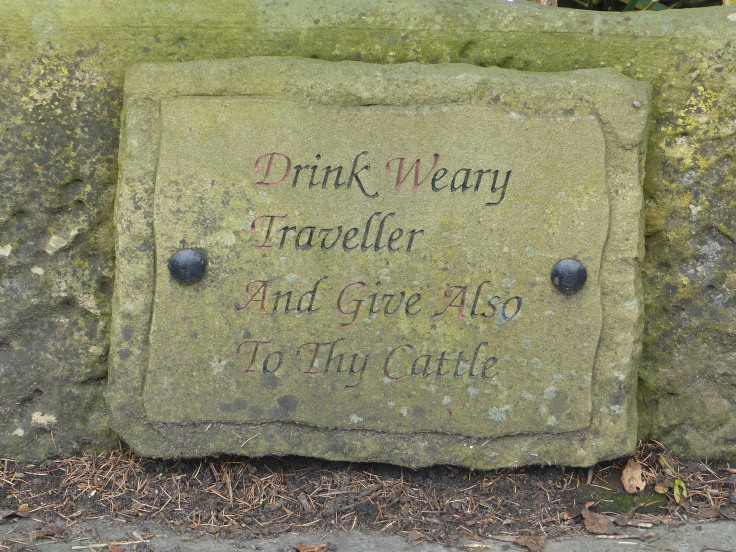 6 thoughts on “The Human Undertow”