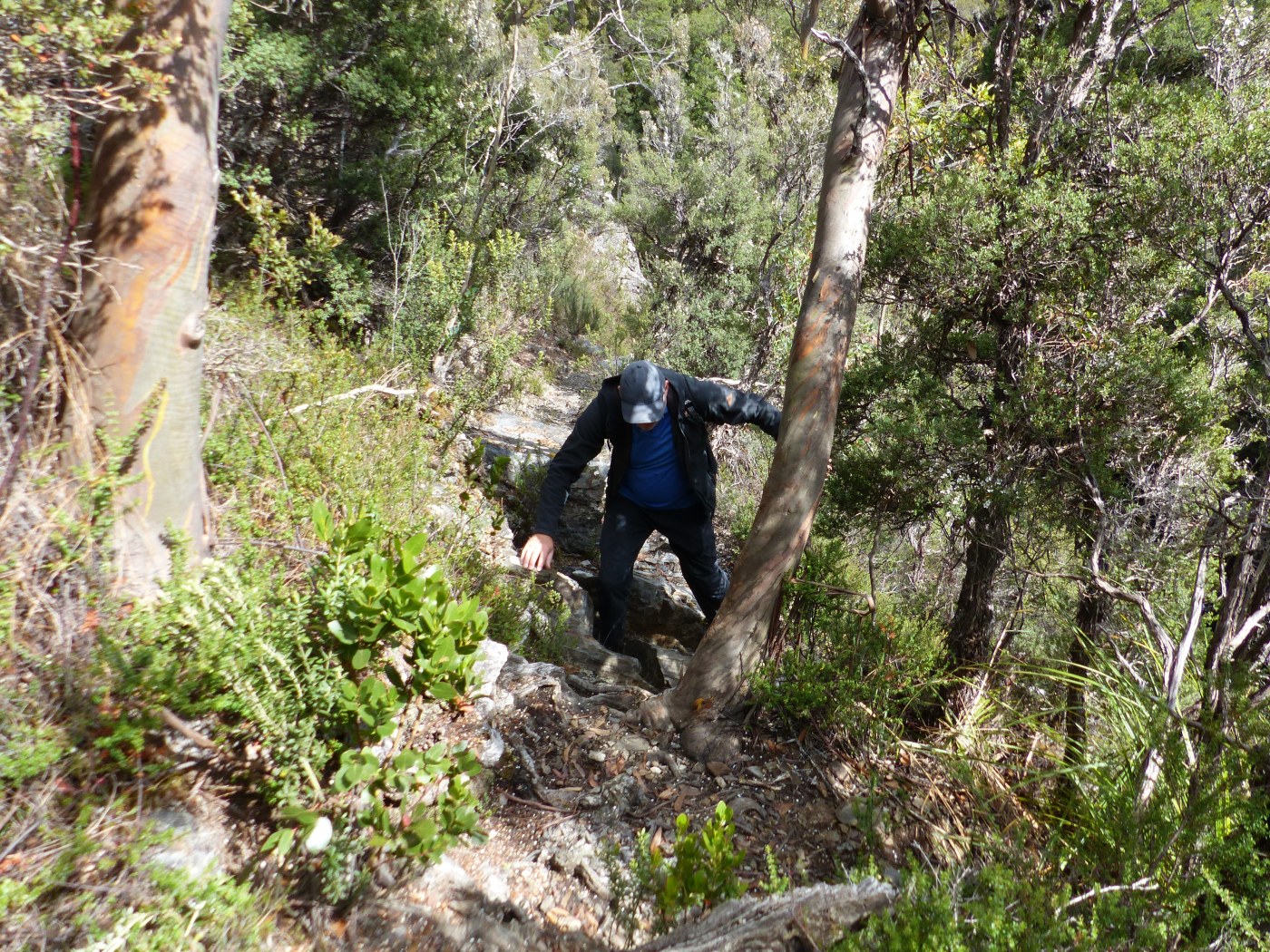 “Are you sure!?” called Steve from behind me, with undisguised questioning of my navigational skills, seemingly convinced I was taking us on a merry dance through the Tasmanian wilderness.

“Yes!” I replied with utmost certainty. I had the guide posts in my sight and despite the fact our path had become nothing more than a steep climb amongst rocks and tree roots, I knew we were heading the right way.

With the March long weekend upon us, we’d decided to head off again to explore another part of our own small Isle. To Cradle Mountain we ventured, intent on a couple of days to walk within the National Park and discover some more of Tassie’s great outdoors. I had been to Cradle Mountain as a child and Steve and I had visited here briefly many years ago, but that was about it, so it was high time we spent some more time in one of our great natural landscapes. 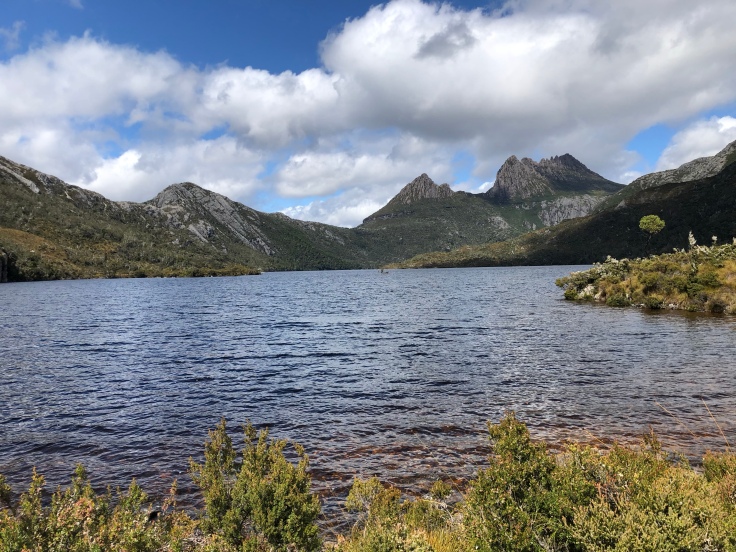 We took ourselves to the Visitors’ Centre amongst an array of visitors with accents that ranged from French to American, Italian to Chinese and it was nice to know that Tasmania was again being enjoyed by our friends from the Northern Hemisphere. We acquired our Park Pass and shuttle bus tickets (since no walks begin outside the park itself and the only entry is by the park’s bus), then tootled the couple of k’s up the road to be deposited, ready to begin our trek.

We’d decided to do the Dove Canyon walk and what a magic day it was for it. The weather at Cradle is notoriously fickle and can turn from sun to snow, literally overnight, even in summer time. Today though, we had blue skies, sunshine and a perfect mild day. The walk eased us in beautifully, along carefully constructed raised platforms, through trees spreading a dappled light and across grassland. We were hoping upon hope that we might spot a wombat. Those delightful, chubby, waddling little creatures have become quite elusive. They, like their Tasmanian Devil cousins, have succumbed to a disease that has spread throughout their populations and in another National Park near our home, 90% of them have been wiped out. We walked, eagle eyed on wombat watch. The evidence of them was everywhere in the form of their toilet habits, which are, believe it or not, unmistakable by the fact that they are cube shaped. Strange but true. Just another of the curiosities of wonderful wildlife Down Under! It was heartening to see so much passing evidence (in more ways than one!), but no sign of the dumpy little darlings themselves. 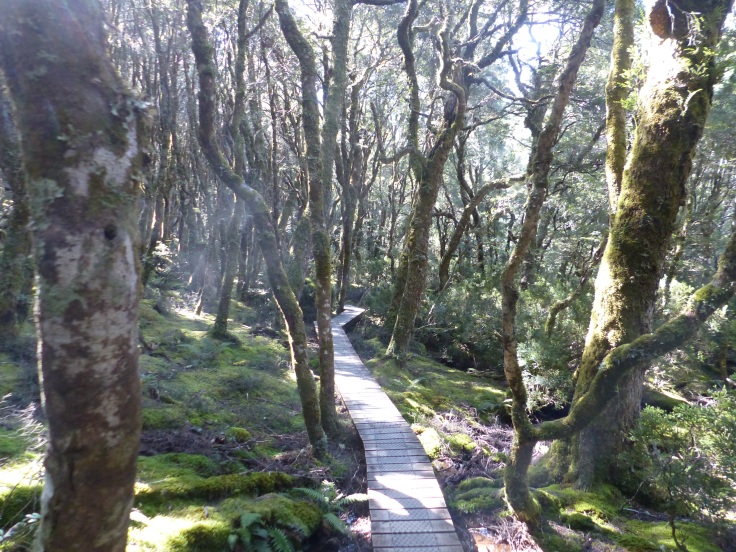 We detoured down the wooden path to see some waterfalls and then continued on, along a well marked, but slightly more rugged path, This was good. Marked enough, so we knew where we were going, but just ever so slightly rugged enough to feel like we were on a fair dinkum bushwalk. 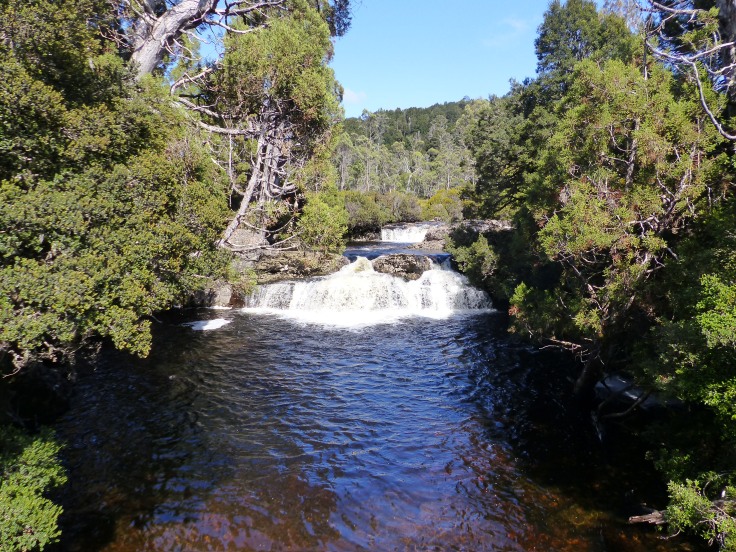 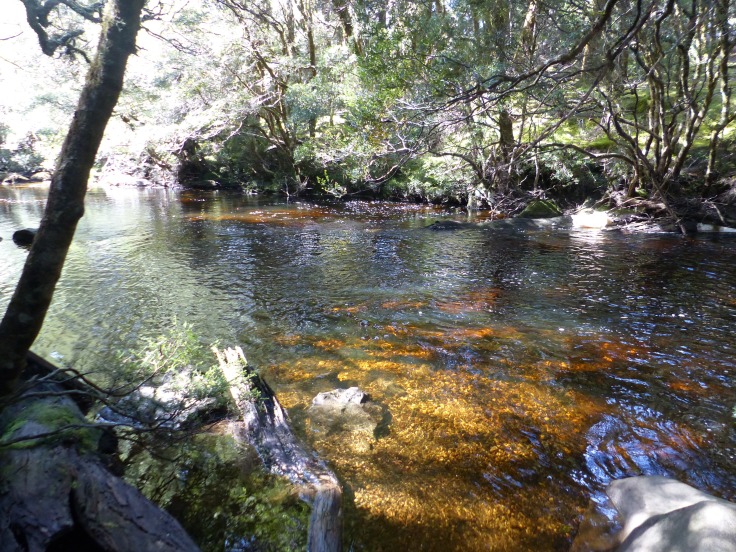 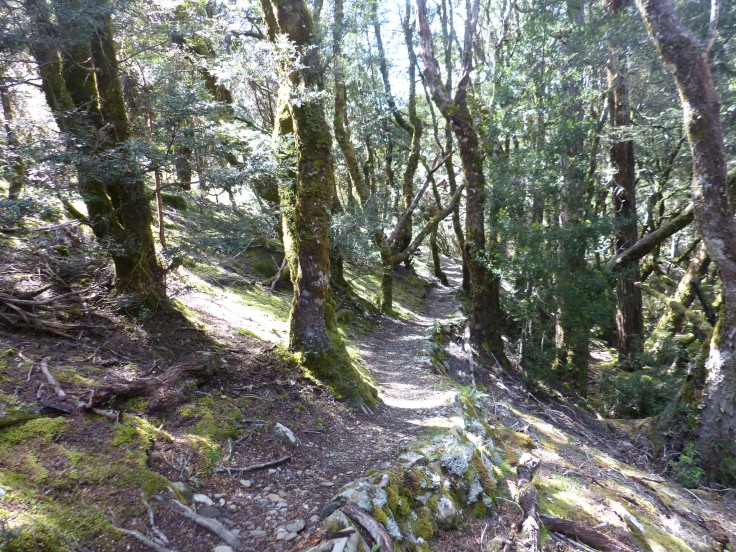 The sun continued to shine, we were warm, and down whizzed the zips on our jackets to cool our trekking torsos. We could hear the river running below us, as we began to climb, and climb, and climb. 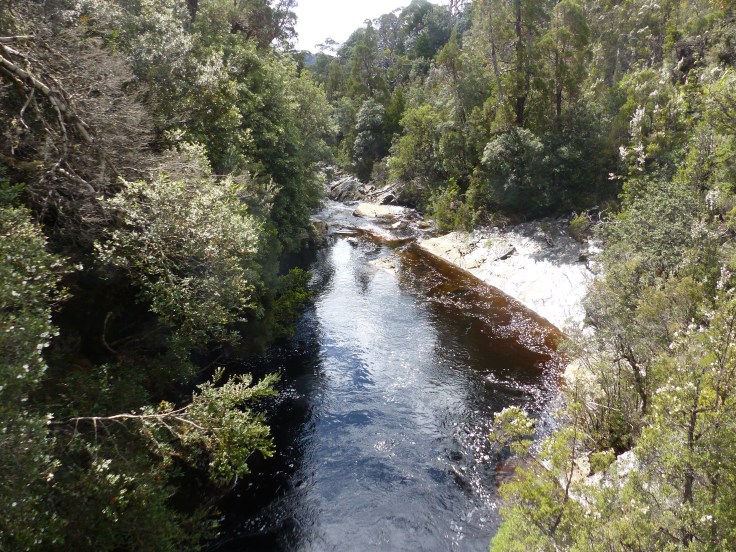 “We seem to be doing an awful lot of up, considering it’s a canyon walk,” I commented to Steve. I would have thought we’d be on a gradual downward plod towards a canyon, but no, up we continued to go. 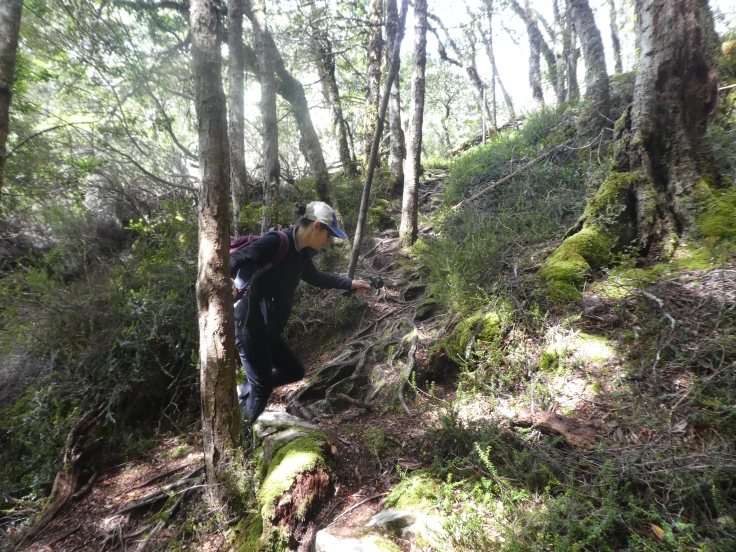 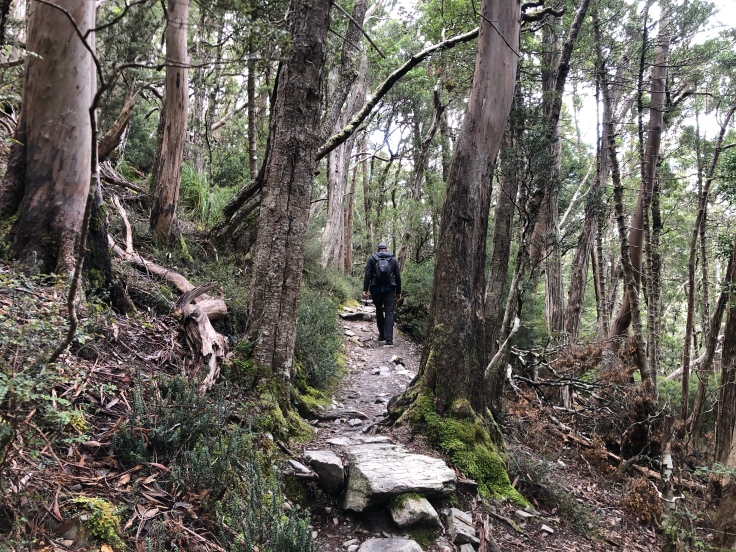 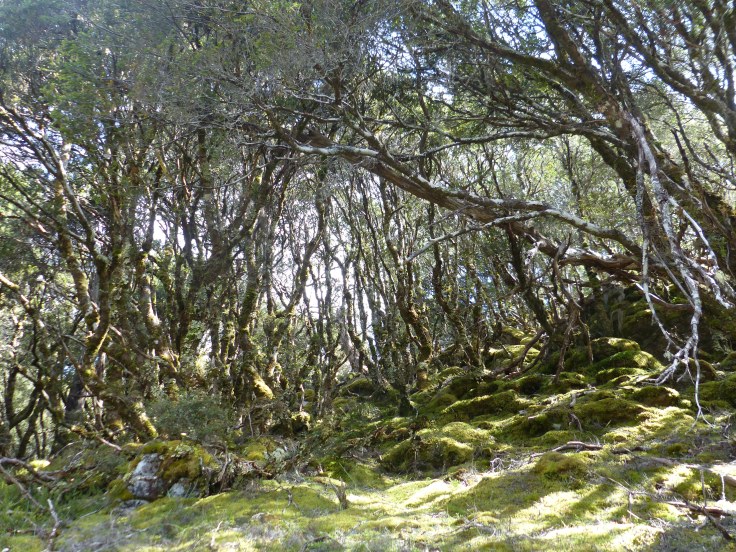 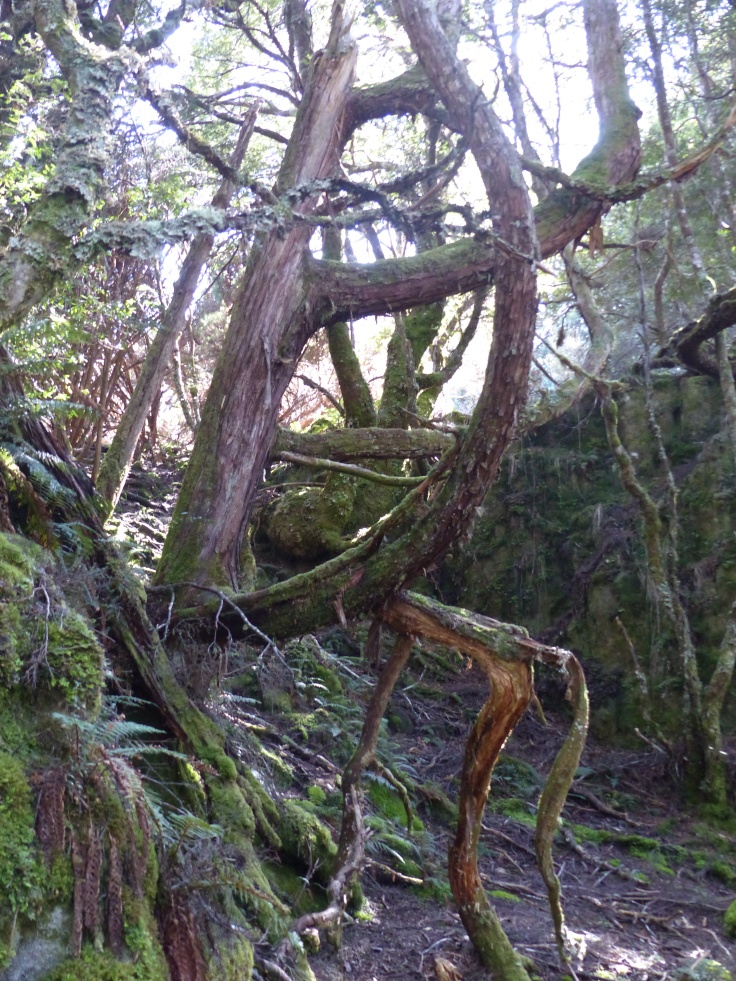 If I had any concerns about this not feeling like a ridgy didge bushwalk, those concerns were allayed forthwith. Our path soon became completely obsolete, as far as a path goes. It was now just rocks and tree roots with a marked guide post here and there to let us know which way to go. At one point I needed Steve to give me a shove from behind, when we encountered a very sizeable rock at the bottom of a steep rocky scramble, which my short legs just weren’t going to scale unaided. Steve gave me a very undignified shove and I scrambled up the boulder, before continuing the scramble up through the rocks and trees. 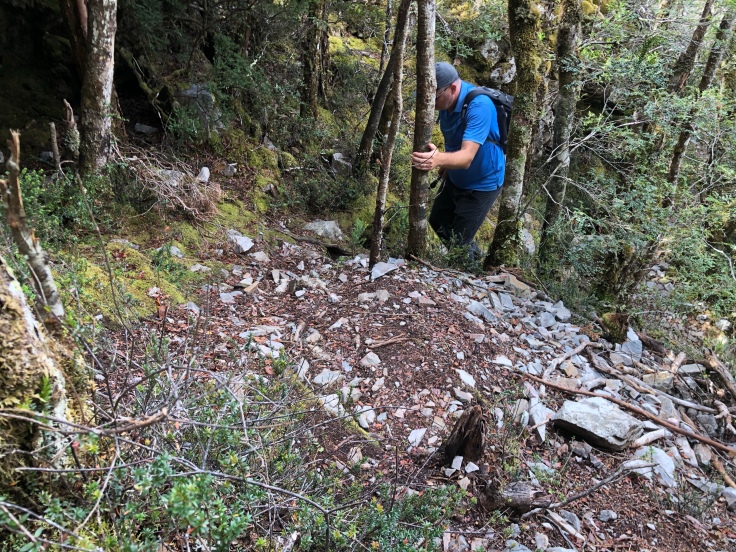 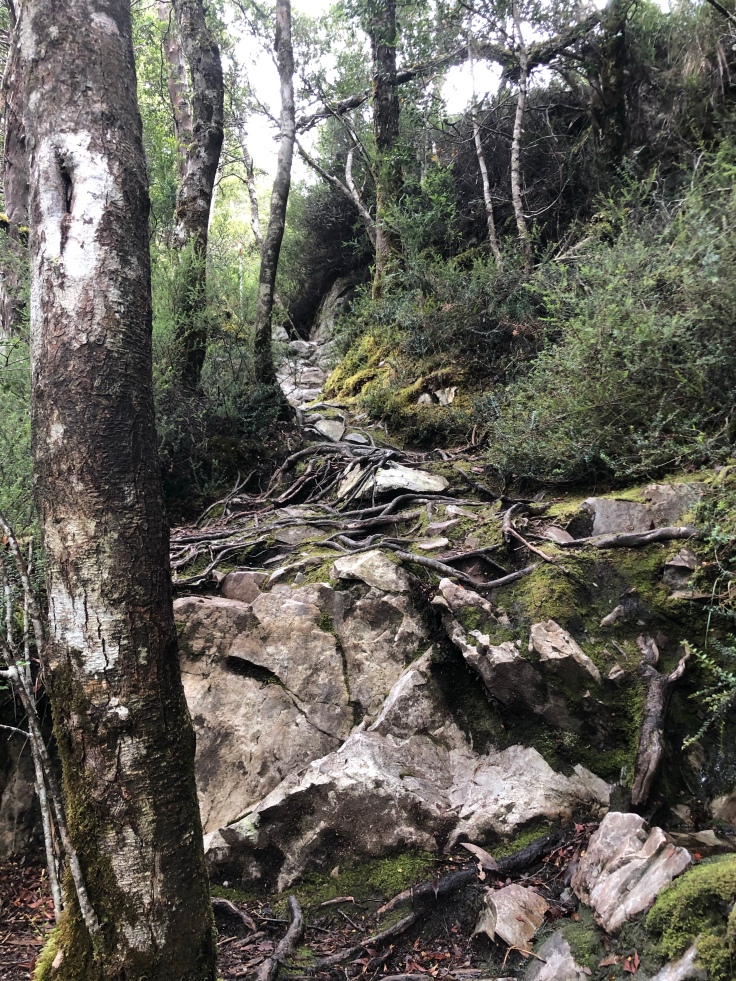 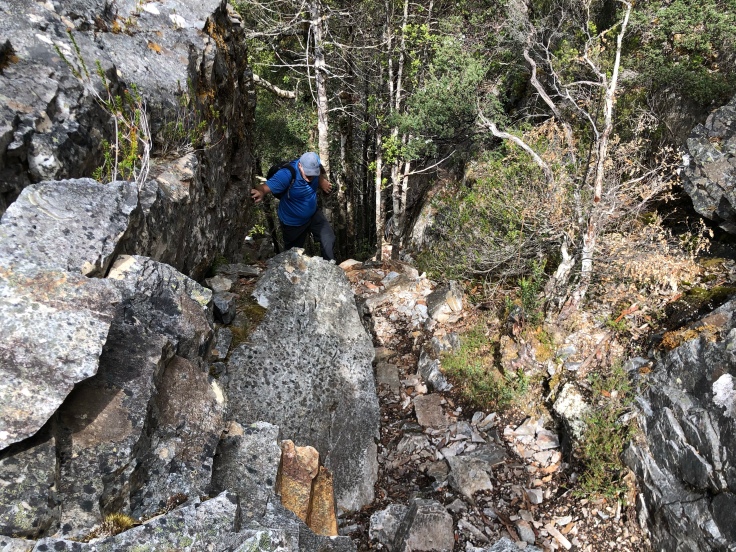 It was a case of all hands and feet on deck. We were grabbing tree trunks and branches, looking for footholds amongst the rocks and roots and it was an exercise in strategy as much as scrambling, to find the right spot to put a foot, with rocks and tree roots grinning with invitation to a misplaced foot, ready to grab an ankle and twist with glee. 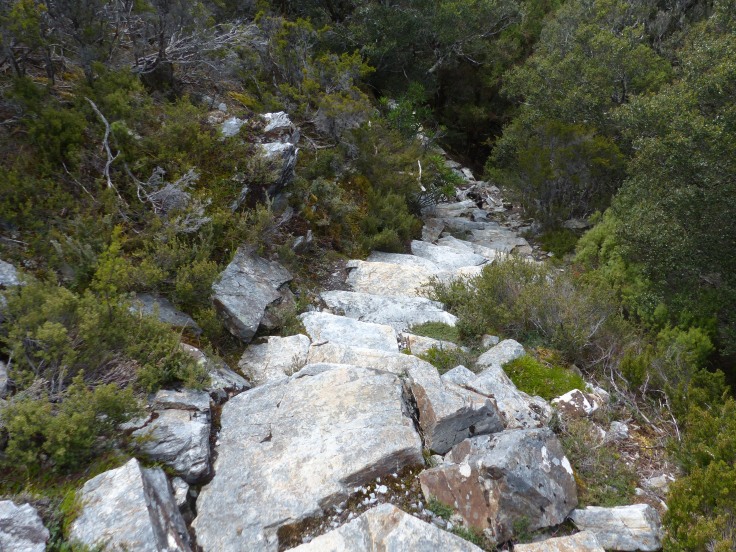 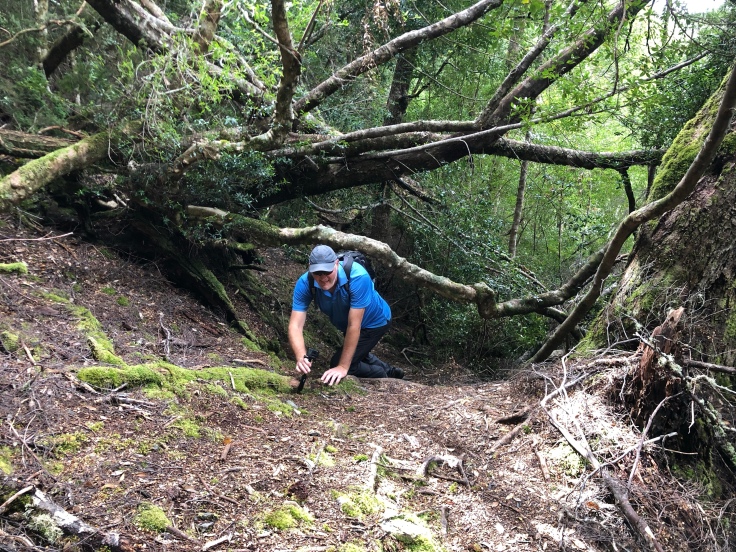 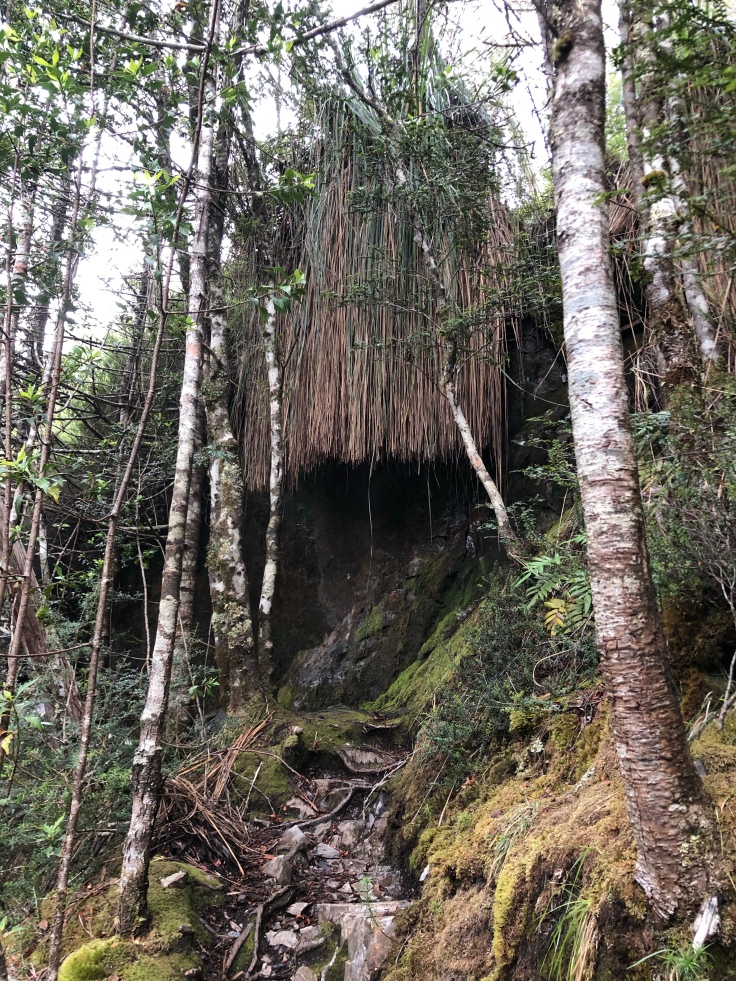 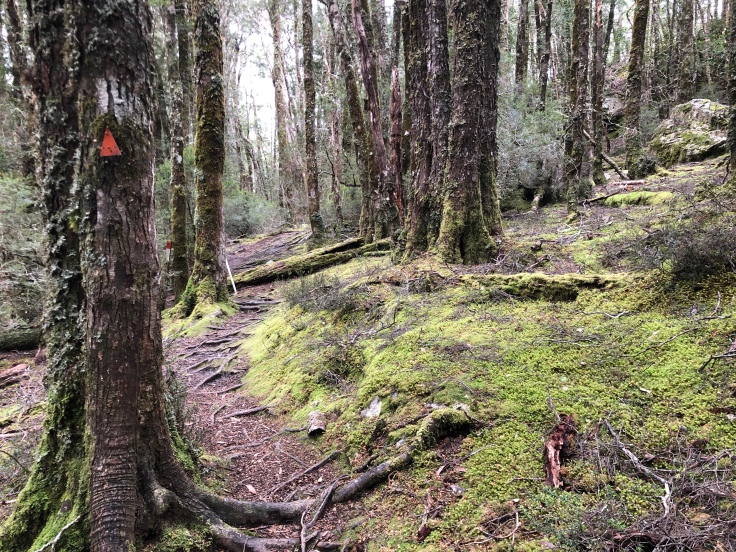 The scrambling continued, amongst trees and rocks and then we would emerge, out in the open scrub with the canyon cliffs to our side. As we trudged uphill, amongst rocks, puddles, mud and scrub, I spotted a snake.

“Snake,” I called to Steve, who was bringing up the rear, just relaying an observation rather than any concern. The snake had done what most of its brethren do when confronted by an oncoming human, which is to say it hightailed it outa there as fast as it could to hide in the scrub. It was only a little fella anyway. I stopped to peer into the bushes in case it reappeared for a photo opportunity, but it was perfectly content to remain shy and antisocial, while we clomping invaders passed by. 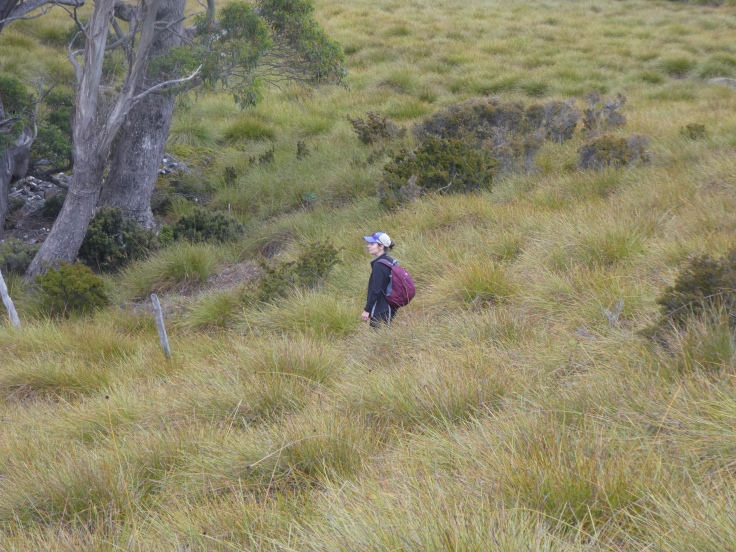 It really was a splendid walk and an hour in, we stopped for a quick snack, plonking ourselves on a rock and taking a breather. It was as well we did, because the scrambling continued and it became not so much scrambling, as SCRAMBLING. Steep hillsides, no path as such, just a case of finding the best footing on a vertical, rocky climb. Steve again had to give me a heave from behind, to provide some assistance to my vertically challenged self as I navigated another boulder at the bottom of another vertical and challenging hillside. 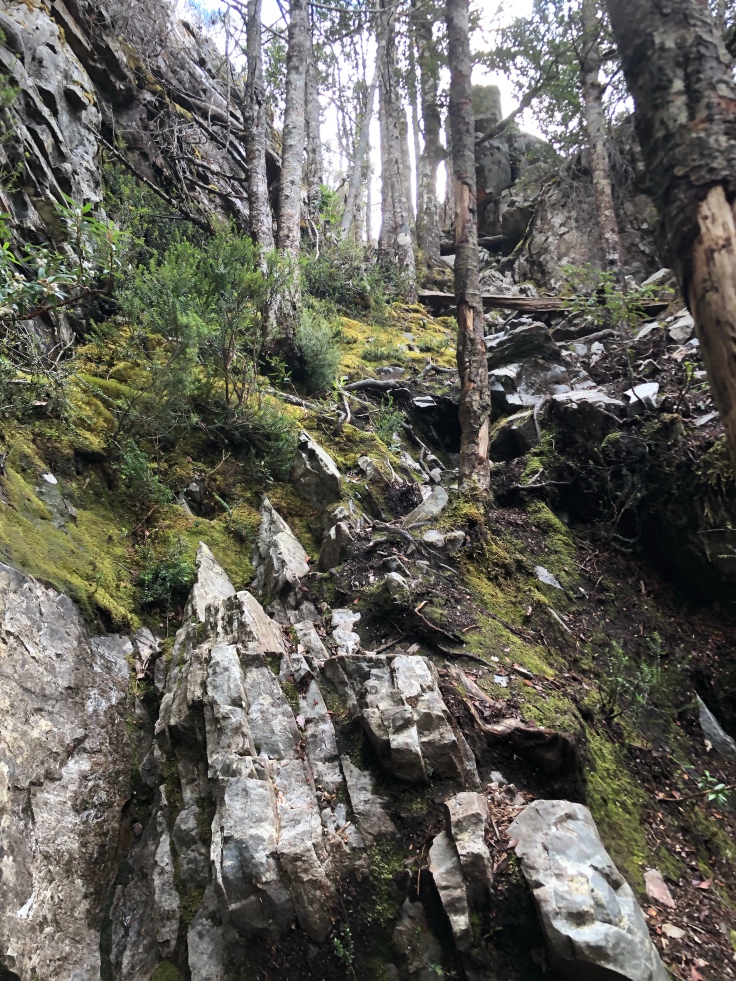 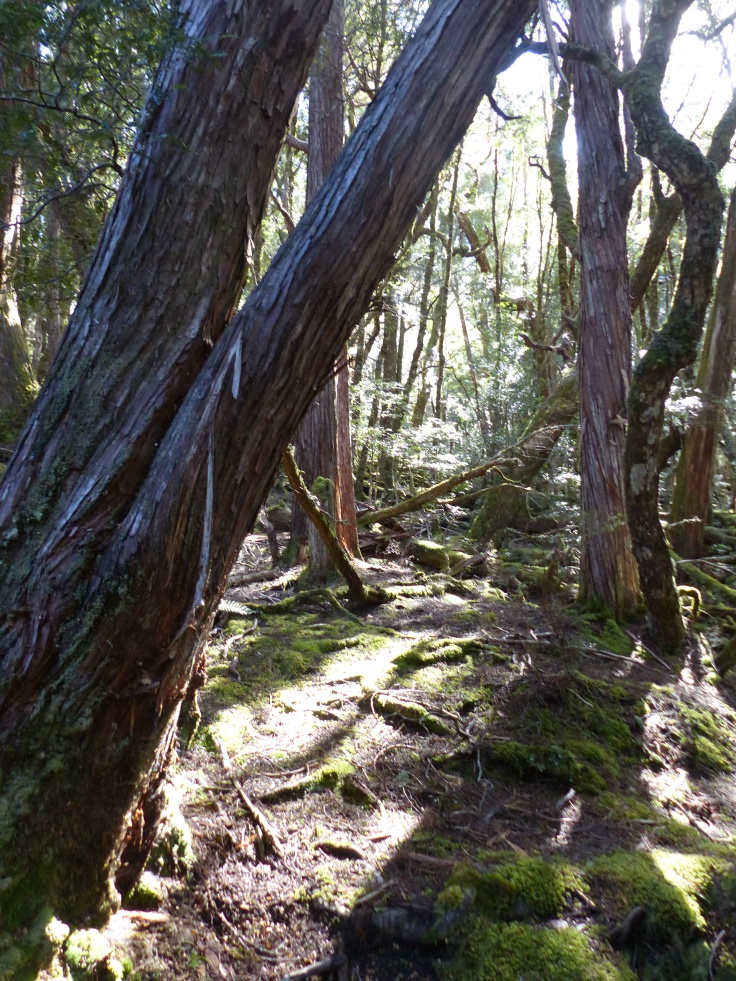 We eventually came out at open grassland and just as we had been eased into the walk on neat wooden walkways, now we were given a gentle ending to our trek, on more of these platforms, weaving their way amongst the native plains. There were lizards everywhere, enjoying the warmth of the sun and while some darted away as we approached, others were clearly way too comfortable and just stayed put, as we ambled past. 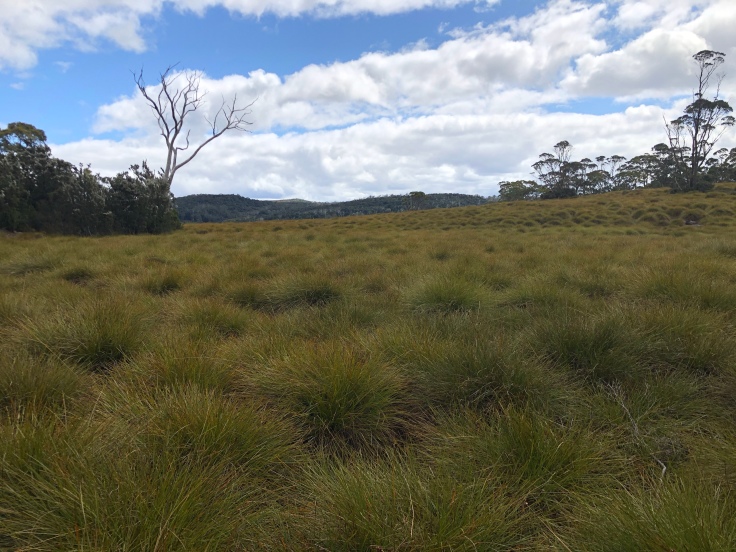 As a fitting finale and in homage to the British ramblers we admire so much, we finished off with a drink at the cafe, where Steve downed a coldie and I had my tea and we were joined by Barry the currawong, obviously hoping for a morsel of something to be flicked his way.

It had been a top walk. The Dove Canyon Walk was labeled “moderate” in difficulty and it was about right for us, as far as how tough we could take it. We do not bushwalk / ramble / tramp / hike as a matter of general life and leisure, so for a couple of rookies, it was hard enough for us. Tomorrow we’ll head towards the mountain and continue our trek and exploration.

It was great to be out in our own wilderness, touching the natural world, as we grabbed hold of tress, branches, rocks and roots, to help us up and down tracks and trails on hillsides and ridges. Nature is certainly good for the soul and it was a top day of traipsing in another part of Tasmania. I am trying to convince Steve that we should do the Camino de Santiago one day and kept suggesting that such mini-treks as today would be a gentle entry point into some practise for the Camino. He was not convinced. I’ll keep working on that. For now though, we shall enjoy seeing some more of our own home turf…rocks, roots, snakes ’n all! Bonza!

Total time on the trail (including photo stops and snack break): 3 hours 32 minutes

2 thoughts on “Just A Pair Of Rookie Ramblers”