“We really are lucky.”

Those words have passed our lips on more occasions than I could count with a stadium’s worth of fingers and toes. On our travels we daily expressed how fortunate we were, to be in a position to see the amazing things we’d seen, to travel as we did, in the manner we did on our trusty two wheels and meet wonderful people. Yep, lucky folks we are.

Recently, I’ve been giving more thought to how lucky we are, to simply live where we do. Those who have followed the blog would know we hail from Tasmania, that little island state of Australia, tucked down the bottom there that’s been forgotten on more than one map or logo over the years (I’m talking to you South Australian tourism and Brisbane Commonwealth Games)! We fly under the radar a bit and while the “big island” is there front and centre, our little state just putters along, part of Australia, but sometimes forgotten. Events of late though, have drawn into even starker focus, how grateful I am for our little island home.

It’s been a rough summer in Australia. Events have been tough and traumatic and tragic. Large swathes of the country burned, with lives, properties and wildlife lost. Our government acted in ways that, while usually embarrassing on a near daily basis, took on a new level of eye-rolling, head-shaking, frown and expletive inducing behaviour, while our beautiful, great southern land was screaming in pain. From drought, to flames, then came the dust storms and now floods. It’s been a tough few months for many parts of Australia. Down here in Tasmania though, even though we have areas in drought and we have had some fires, we have escaped the worst of nature’s fury.

I will admit to feeling guilty. While listening to the news reports of the fires that appeared to be an unstoppable foe, despite the heroic battle being waged by our volunteer fire fighters, I was surrounded by rolling green hills, pink dancing poppies and fields of pyrethrum like a daisy covered snow drift.. 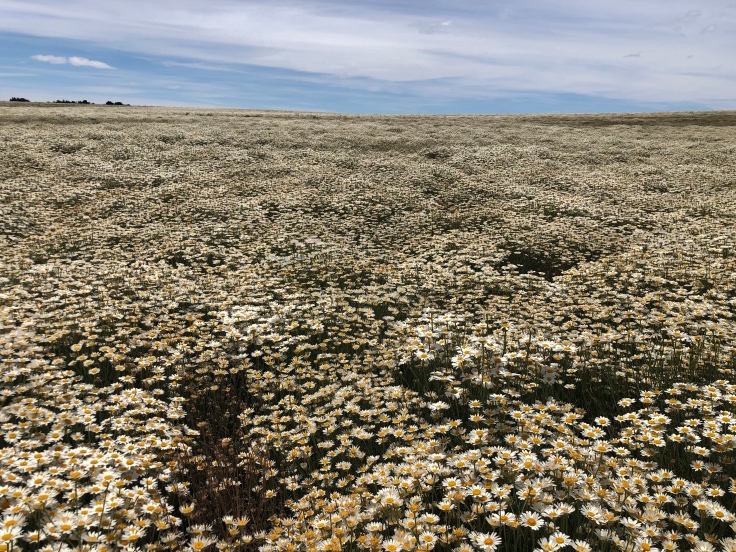 While those on the mainland took to the rivers and beaches for safety, as the sky bore down on them with an angry, anguished mask of red, the only red I saw was the peaceful glow of the sunrise over our quiet, serene rivulet. While wildlife were lost in the millions in New South Wales and Victoria, I sat outside on balmy nights, with Frank, Howard, Daphne, Shirl and little Daisy (so named by me), our regular group of wallaby visitors that are so at ease with their surroundings that they happily sit and watch us, just as we watch them. No danger here. Tassie, I thank you. 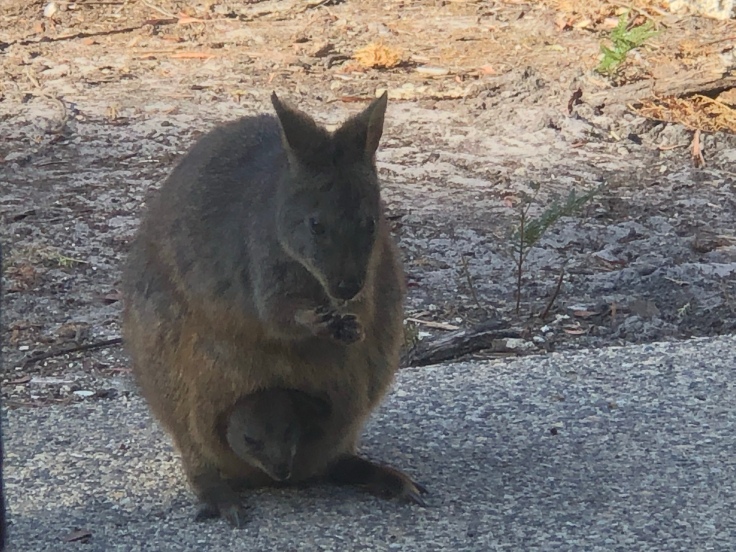 Summer for us, in Tasmania, was a time of peaceful days spent amongst the gum trees, runs along the quiet roads and through the village (that’s me, not Steve, for a runner he refuses to be) and time spent with family and friends, without the worry and peril that other families were experiencing. During a few days spent with Steve’s parents on the east coast, “how lucky are we” was spoken yet again. We walked along Swimcart Beach, not far from the town of St. Helens and, even with the annual campers nearby, the white sand stretched before us, with barely a soul in sight, the water a spectacular blue, crashing and lapping at those pristine white grains. In other parts of Australia during summer, a beach like this would be the human equivalent of a tray of sausages at the weekly golf club meat raffle…crammed in side by side and end to end without a wink of space to spare. Here, we had virtually an entire beach to ourselves. Tassie, I thank you. 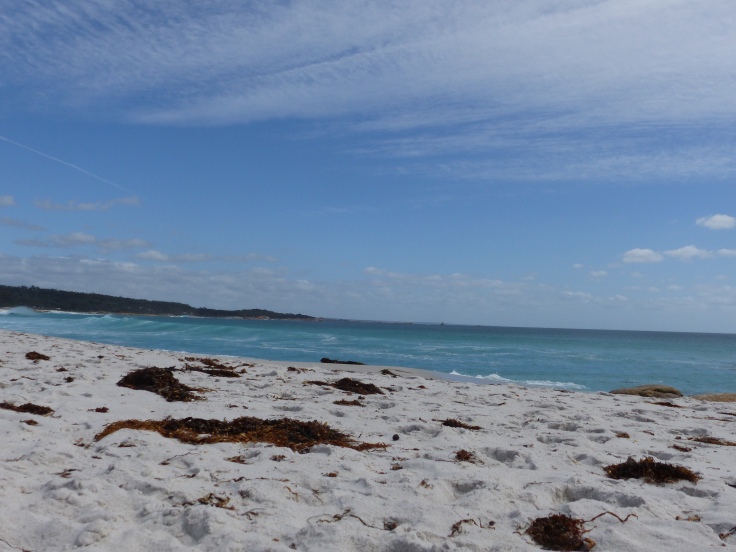 A trip down south, to spend time with a dear friend, saw me driving past lavender fields and spending hours simply “being”, with fairy wrens hopping peacefully nearby, while looking across at the sparkling Channel. Places like this, in this little island state, have kept us free from the ordeals that other parts of Australia have suffered. Instead, we have been able to truly, simply, “be” in an environment at peace, rather than in pain. Tassie, I thank you. 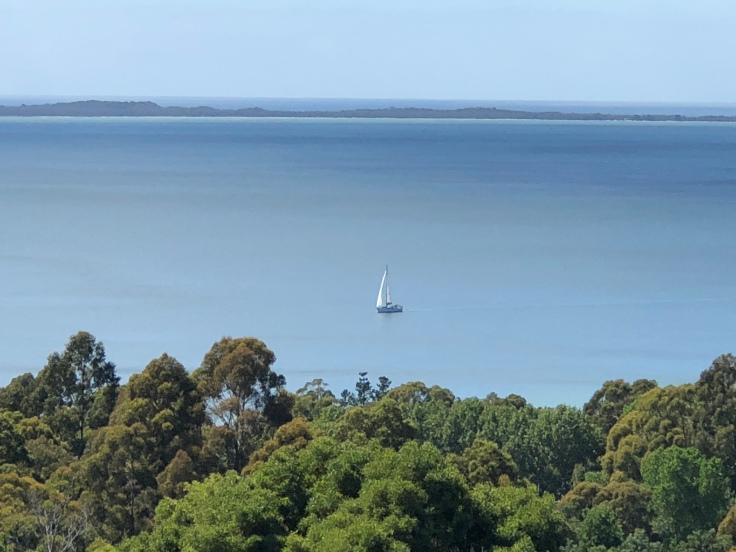 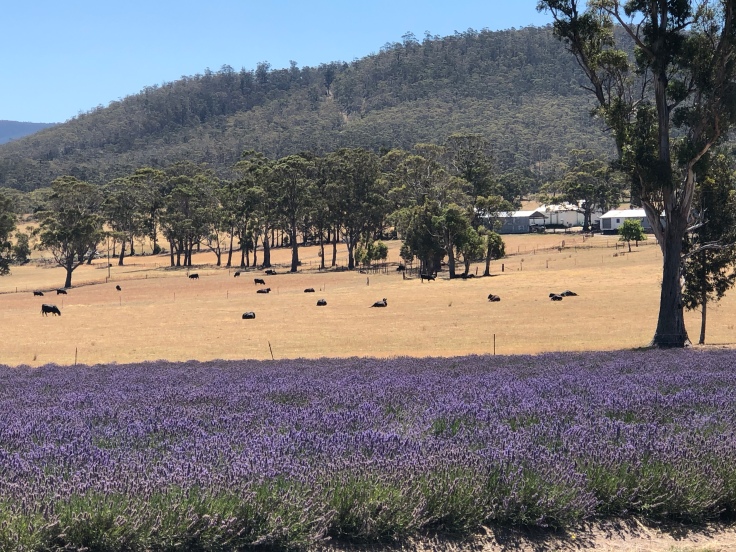 And so, while I’m usually writing of some place or other that Steve or I have been to, or explored, or pedalled, or roamed, today I simply pen this note of gratitude for our own place. My place. The rest of the world is amazing. Our travels have been, and hopefully in the future will continue to be, amazing. But…this little place, tucked away down the bottom of the globe, our little Tasmania, is beyond special in so many ways. I know this. I’ve always known this. Lately though, seeing what Australia has gone through, I have turned a wagging finger towards myself, to sternly remind me to not take what we have here for granted. Instead, be truly grateful for this little place, this small island sometimes forgotten, yet punches so far above its weight in what it has to offer. We really are lucky….for our peace, for our bushland, blue mountains and green hills, for our rainforests and beaches, for our safety and serenity. For all of that, Tassie, I thank you. Travelling far and wide gives us the time of our life, but…time at home, in this little island home, is pretty darn special too.   I always think travel is the best classroom, for what we learn about people, places and ourselves, but appreciating and really seeing our own patch and what it gives us, has been a new lesson in gratitude. Thanks Tassie, you’re a gem. 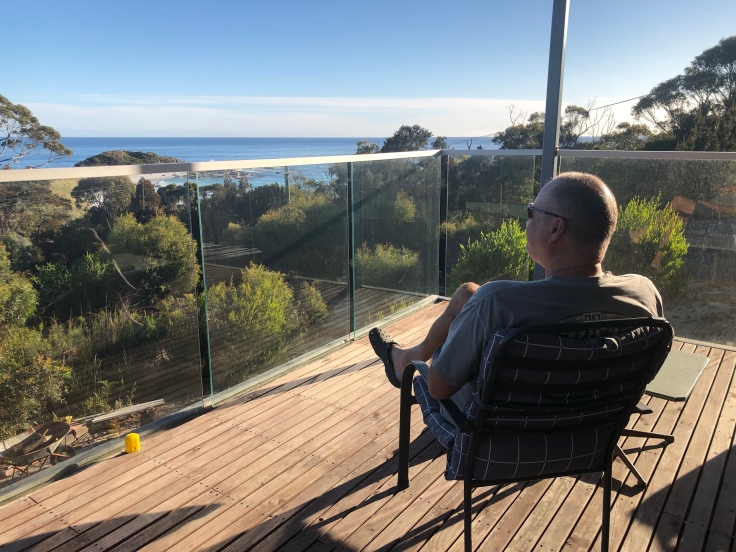 6 thoughts on “To Tassie, With Gratitude”