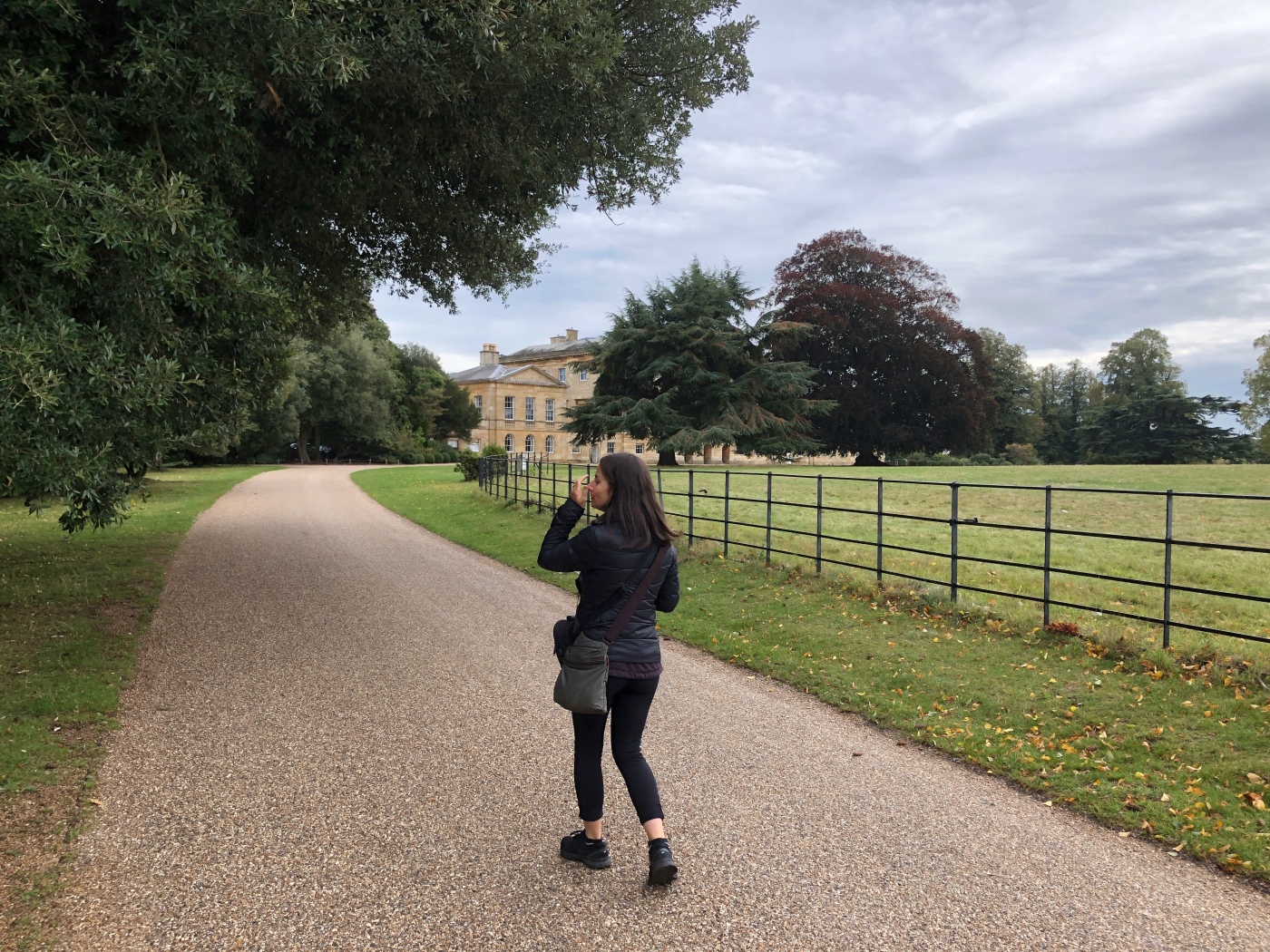 Time to move on and get ourselves within shooting distance of the airport, so we can make our way there on Wednesday. It was still another day to fit in a bit of exploring along the way though and we had a glimpse into the lives of the upper crust.

We set off from Cirencester and had another drive through the beautiful countryside, along the stone-walled lanes, past stone cottages and through avenues of trees. We had to dodge those crazy pheasants again, as they sprinted not just across the road, but up the road as well, staying in front of us, so we edged along, waiting for them to finish their fun and get off the road and back into the hedges and trees where they belong.

We called into Basildon Park, near Reading to have a look at this 18th century mansion and grounds. We had another lovely woodland walk through the estate, up to the main house and since we arrived right on eleven o’clock, we started our visit with a cuppa in the tea room, to complete today’s elevenses.

Basildon Park is an example of a Palladian mansion, an Italian style characterised by symmetry and classical features. It’s also, apparently, a term that refers to “fresh air” and a feature of this style seen at Basildon, is the entry on the first floor, rather than the ground floor, requiring visitors, like us, to go up stairs to a balcony to get to the front door.  This was so when the doors were opened, it would “send fresh air throughout the house” and because the entry was elevated, this could be done without bringing in leaves and debris from the outdoors.

The house itself was built in the 18th century and owned by Sir Francis Sykes, an employee of the East India Company. It also has 400 acres of meadow and woodland stretching down to the River Thames. The house had a few different owners over the years and was a hospital during WWI and used by the U.S. army during WWII, using the house and grounds for their D Day preparations. There was also a POW camp in the grounds. Apparently the house wasn’t very well looked after during that time and after WWII it was left derelict, with not a single window left intact. Then, in 1952 it was taken over by Lord and Lady Iliffe, who set about restoring it to its former glory. The house as we saw it today, is as it was during that time and was an example of 1950’s posh. The Iliffe’s entertained Society regularly at the mansion and visitors included Princess Grace of Monaco and Queen Elizabeth the Queen Mother.

We strolled through the rooms, where there were also displays of 50’s fashions as worn by Lady Iliffe, with Chanel, Givenchy, Dior and Balenciaga dresses and gowns adding to the opulence of the rooms.

After strolling through the house, we returned to the crisp and brisk outdoors, for a look at the garden, before strolling back through the woods. 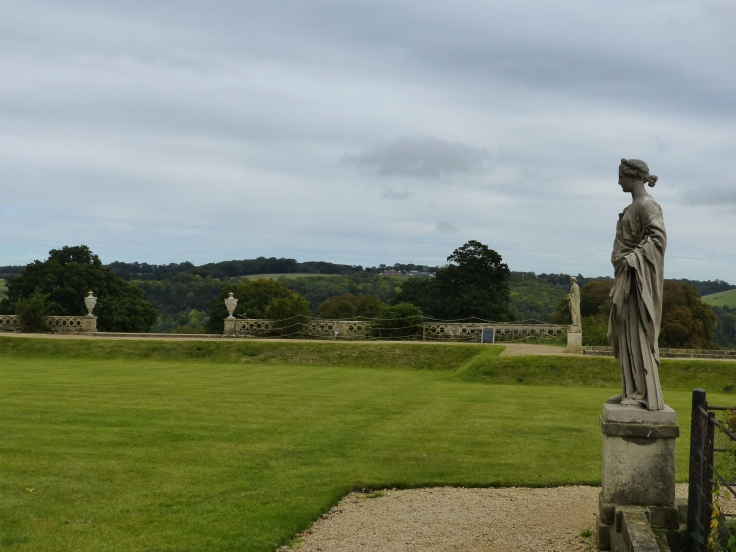 It was a lovely walk, through the greenest of trees, with the autumn colours peeking through the green and the beautiful skeletal branches of the trees, twisting and bending as if reaching out to their neighbours. 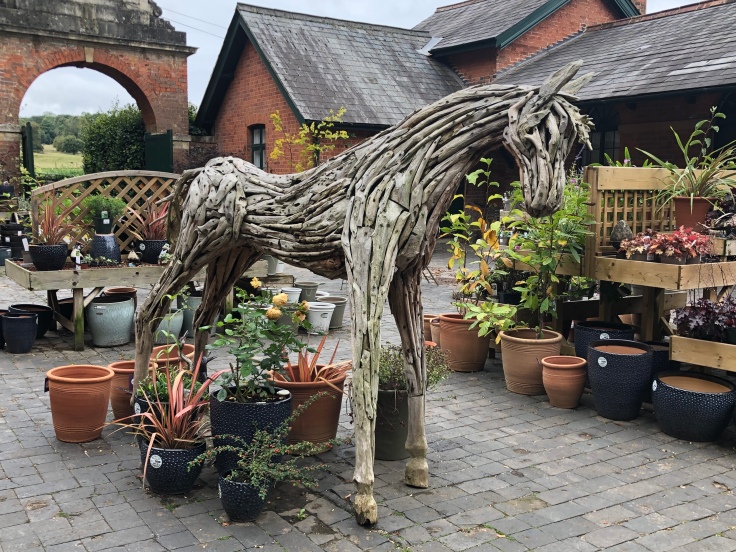 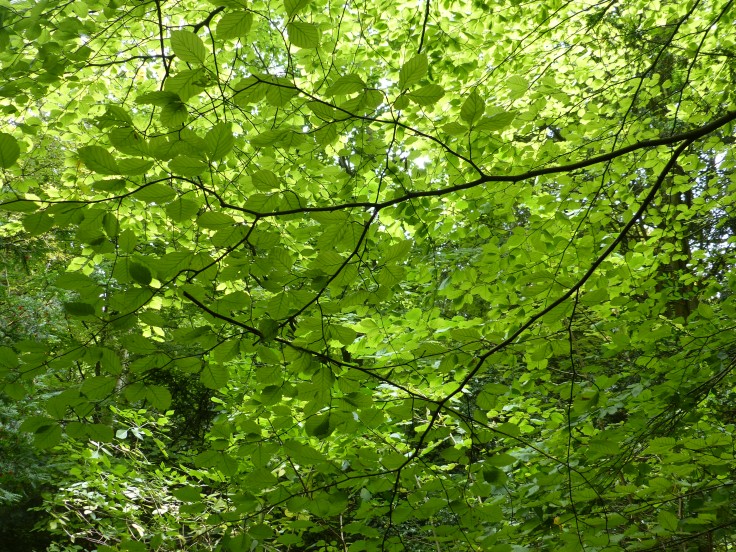 On we motored, whipping along the M4 until we arrived at our destination. We’re spending the next couple of days in Windsor before we fly off, so after a restorative cuppa to recover from the hectic pace and somewhat stressful motorway exits and roundabouts, we went out into the fading light and splonking rain, for a stroll around this spot so favoured by the Royals.

There were certainly other tourists around but it didn’t feel too crowded and it was a nice stroll along the pedestrianised avenue, past the castle, down cobbled lanes and along the High Street. 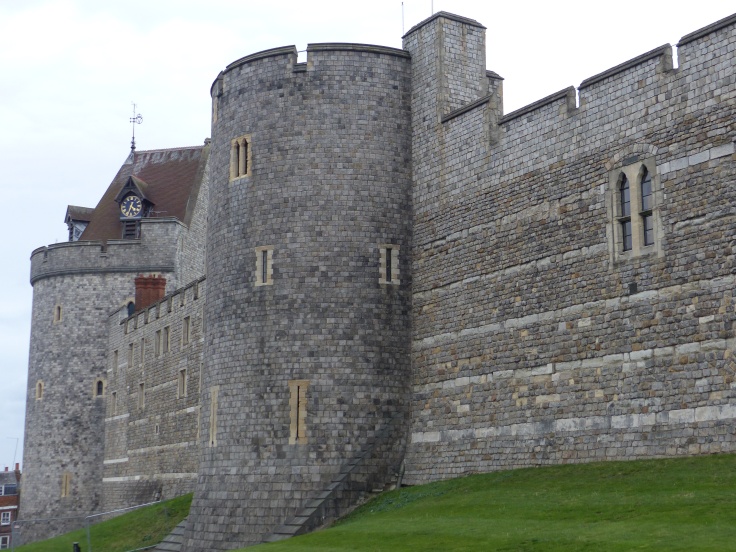 The town itself is actually older than the castle, dating from the 7th century, with Royal ownership coming in the 9th century. We walked down cobbled streets that were once the market place. The streets remained unpaved all the way to the 18th century and apparently was quite a putrid place, with lots of very unpleasant smells from the variety of traders, such as fishmongers and the town’s slaughterhouse and butcher were located right there in the town centre. Today, it was a very nice, genteel place and a very pleasant place to stroll around, even in the sogginess. 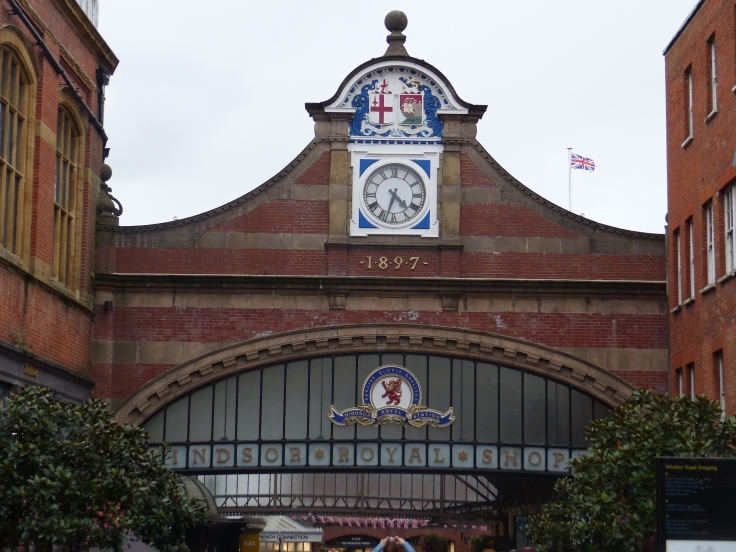 We walked through Windsor, then over the bridge, across the Thames and we were in Eton. While Windsor felt historic and olde worlde in places, Eton felt, if anything, a bit quaint. The buildings seemed to have original shop fronts and with the hanging baskets and rows of Union Jacks, it seemed like time had stood still in some places. 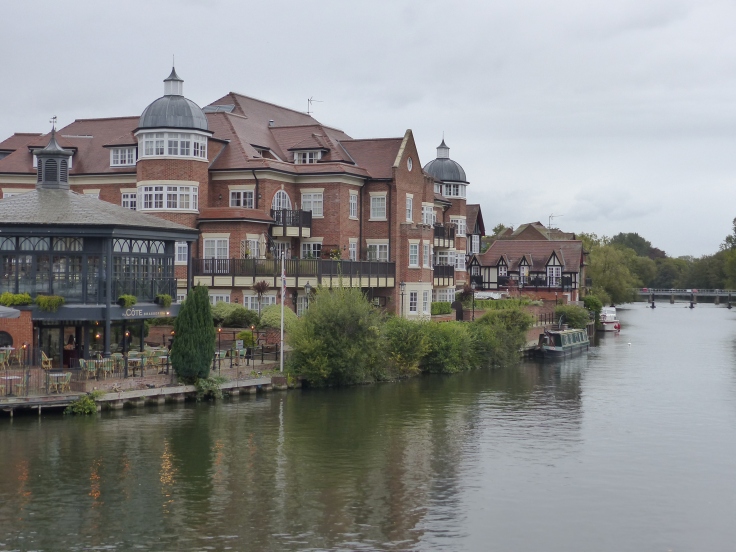 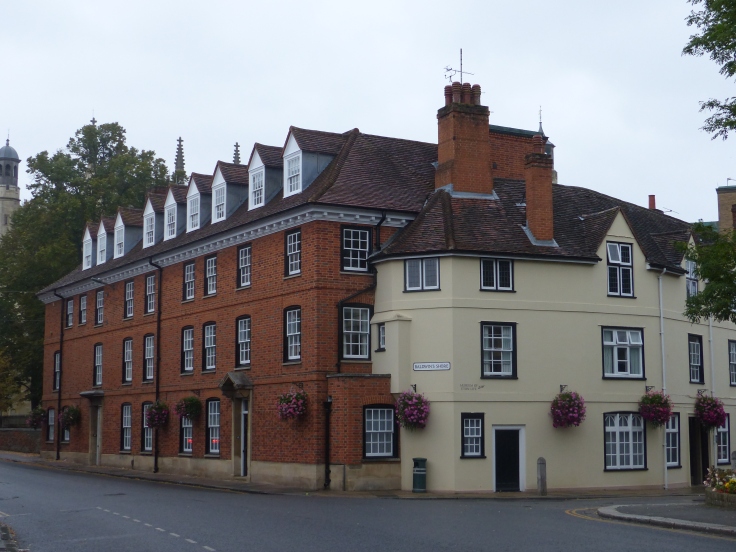 We made our way up to Eton College, which wasn’t open to the public, so we could only get glimpses of it from the street, but there was definitely another feeling of us being in posh territory. I saw a couple of students walking in, wearing the traditional Eton uniform of striped trousers and tailcoat. Just seeing young men walking around in such traditional dress, was a reminder of the the history here and the importance placed on retaining tradition. I couldn’t help thinking of some of the disadvantaged areas we’d ridden through in the north of England and thinking what a privilege it must be, to attend such an esteemed college and receive an education at an institution chosen by Royalty and the potential doors that could open. 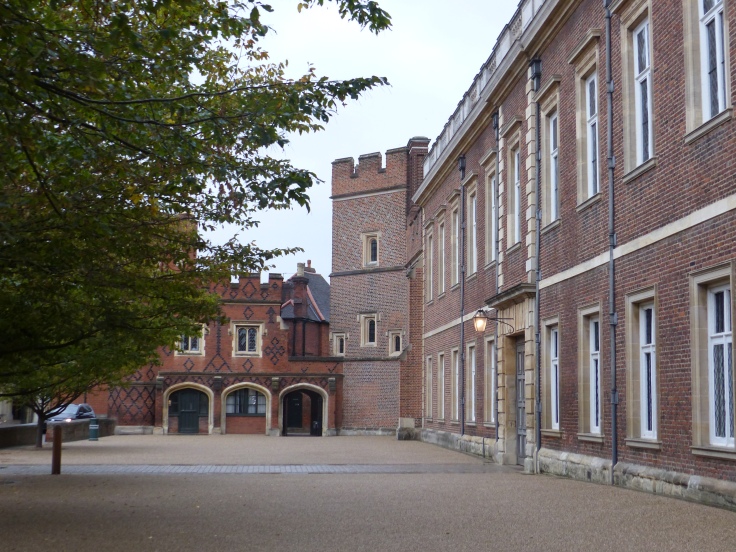 Back we went, through the streets that were now growing quite dim and very wet indeed and we called it a day. A fascinating day, with a glimpse into different lives, seeing another grand house and then ending in a town with very grand connections. It was all utterly delightful, with beautiful countryside to see and walk through and then another very nice town to explore and roam. This country is fabulous. So much to see and do. So much history and so many stories. So many fascinating and interesting places to visit and explore. I remain at the end, as I was on arrival…lovin’ it! 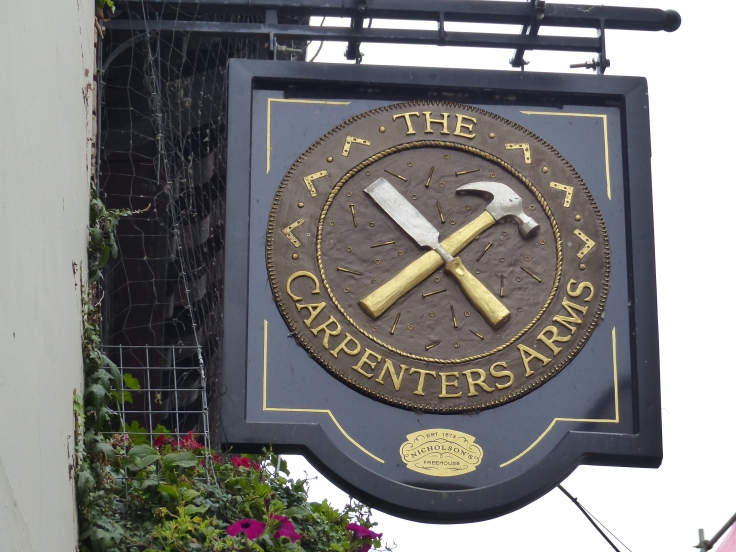 2 thoughts on “A Touch Of Posh”