Time to say goodbye to Bath. Lovely Bath. I do love that city and could easily spend a lot of time there. But…time to move on. We pedalled out on a very cool morning, one could even say chilly and had a final tour past the beautiful buildings, through streets lined with Bath stone and then out onto the Kennet and Avon Canal.

We had a short climb up a hill to get to the canal, something that still totally curdles my brain. Going UP-hill to get to a canal. How does that work! Once we were there, it was magic. We merrily pedalled along the path, with the narrow boats moored alongside, or slowly gliding through the water. 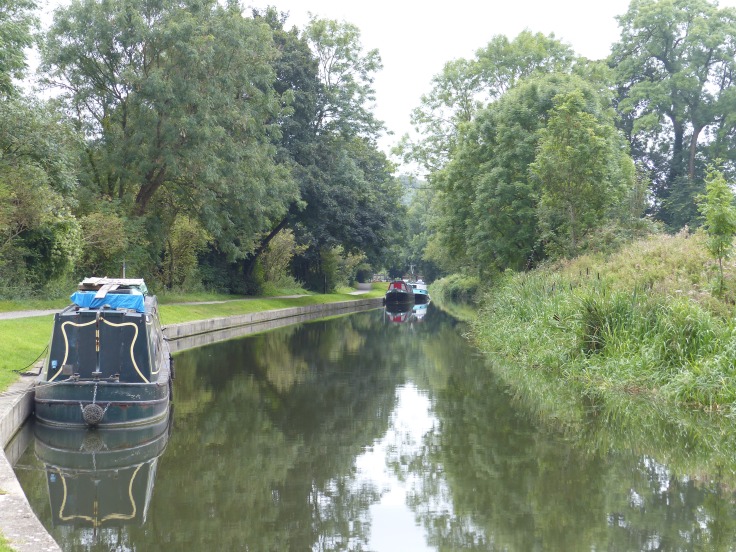 It was so peaceful. It was a simply delightful ride. I waved and gave a “good morning” to the people on the boats and they gave a cheery smile and wave back. We passed walkers and people sipping their morning tea on the deck of their boats, everyone with a smile, a greeting or a wave. 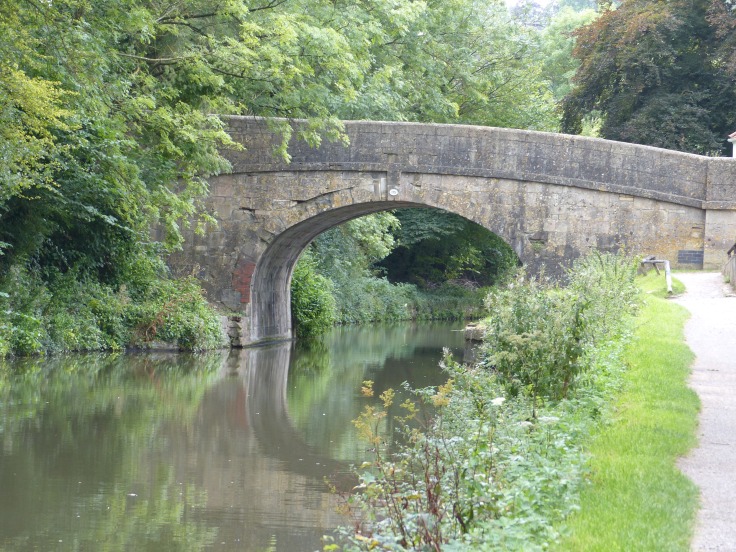 We hadn’t gone far though before the rain started to come down, so a quick stop, into the slicks and we were off again. On we pedalled, beside the water, under bridges and through trees. Then a four legged local walked towards us, the tail went up and a cheery “miaow” followed. I stopped to say hello and the moggy gave us a sniff, jumped up on my panniers for another sniff and then walked around the bikes in search of a pat. I obliged.

We came to the Dundas Aqueduct and seeing aqueducts anywhere is always pretty speccy. A bridge for boats. Very clever. This one was designed by John Rennie, obviously a supremely clever engineer, because we’ve seen his name around a lot and he designed many bridges and canals, including the Kennet and Avon Canal and London Bridge. This particular aqueduct was finished in 1800 and he wanted to construct it “in style” so the classically inspired design along with the Bath limestone gave those entering the city along the canal something quite special to look at. Transporting coal was one of the main uses of the canal and this aqueduct helped carry the boats over the top of the River Avon.

By this time, with the rain having eased, Steve had cavalierly discarded the Orange Wonder. He should have known better. Yep, down came the rain again. “I’m stopping under this tree,” came the call behind me. So once again, a stand of trees gave us some shelter and Steve slicked up once again. The drizzle continued on and off, but the slicks stayed on, because we knew they’d be needed again!

“Are you still loving at?” called Steve.

“Yep,” I replied without a nanosecond’s hesitation.

“Because it’s so pretty.” The rain wasn’t bothering me because it was such a nice place to ride and we were taking things at an easy, relaxed pace, just cruising along. It was great, even if it was very soggy. 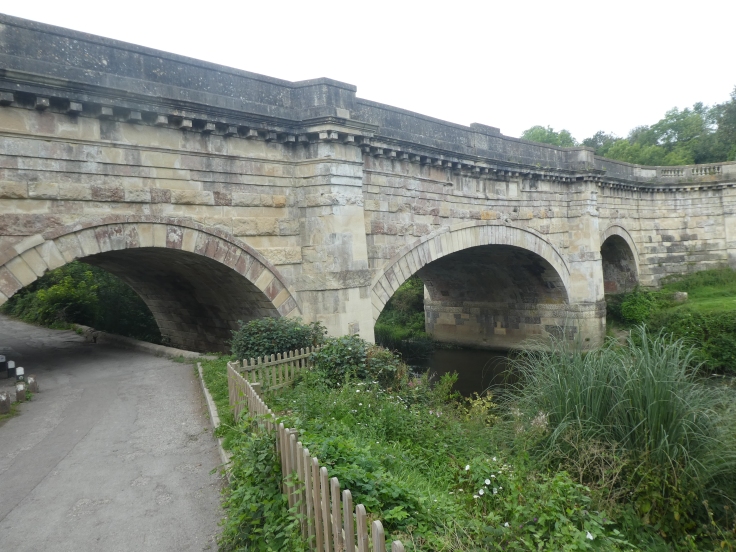 We came to Avoncliff, where there was another John Rennie aqueduct. This time there was a sign asking cyclists to walk across, so we wheeled the bikes along and had a chance to look up close at the landscape around us and down at this very clever piece of engineering. 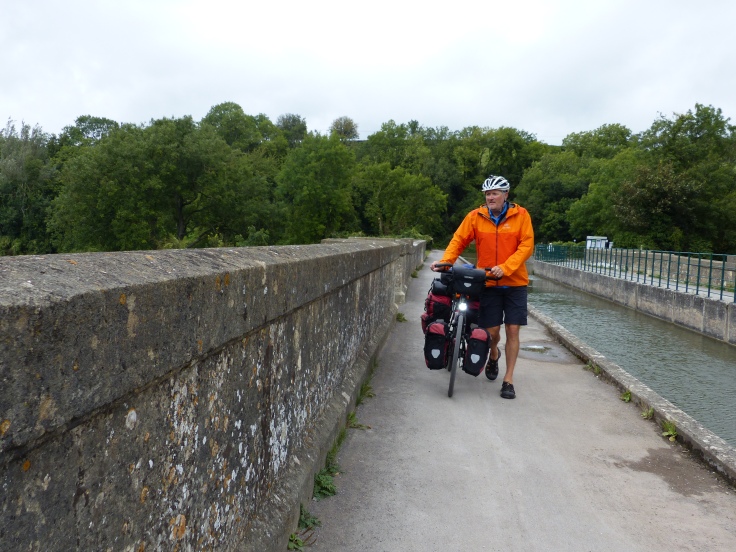 We arrived in Bradford-on-Avon and decided to stop at a pub beside the path for elevenses. This was primarily to give us legitimate access to their conveniences, since we hadn’t been able to find any public ones, but it was also a nice spot to sit, right beside the canal. It was at this point that…the rain came down again. We had some shelter for the time being though.

While we sat we decided to look up some places to stay and discovered that they were pretty thin on the ground. We found a pub in Warminster, where we thought we’d shoot for today, since it wouldn’t be a long ride and we wanted to take things a bit cruisy. The problem was, check-in wasn’t until 5:00. We didn’t want to hang around that long, especially if it was going to keep raining, because we were already pretty soaked. Steve gave them a call and the very helpful Craig at the other end of the phone said if we could arrive by 2:00, there’d be someone there to let us in. After that, everyone choofed off after the lunches had finished and wouldn’t be back to open up again until 5:00. We booked, headed for the bikes and checked our remaining distance.

“Two hours to go twenty-kilometres. Easy peasy,” said Steve. Now, ordinarily this would be so, that would be a cinch, a complete doddle. But, now we had an actual deadline.

“Don’t say that,” I said, knowing our history and track record, “now you’ve jinxed us good and proper! Now we’ll have hills and detours and wrong turns and a puncture!”

We set off, with one eye on the road and one eye on the odometer and the time. After our nice, easy, cruise along the canal, now we were racing the clock. We were most definitely on the road too, our gentle traffic-free canal path was well and truly behind us and we were on busy roads. The wind wasn’t helping and the rain continued to come and go and we had truck after truck behind us or beside us. We kept to the footpaths as much as we could and every now and again we’d get a shared cycle/pedestrian path for a little while, but most of the time we were in the traffic. We pulled over whenever we could, to let the line of traffic go past us, but it was hard to stop, for most of the way we didn’t have a shoulder and we were pedalling up hill and into wind, making things even slower. The drivers were fantastic again though, waiting behind us until it was safe to pass, even the trucks and then giving us distance when they went around us. They were wonderful.

We got to a service road and had a brief respite from the traffic. There was a man in a van up ahead of us and we saw him at the end of the road, about to rejoin the highway. He was standing waiting for us. That very nice man was waiting and holding the gate at the end of the road open for us.

“I didn’t want to lock it so you couldn’t get out,” he said.

“No problem,” he replied with a smile. I’ll say it again…I love it here! People are so friendly!

We rode into Warminster, found the pub and made it with half an hour to spare and we’d managed to outrun the jinx too, because nothing untoward happened along the way. That made it a very short day on top of our short ride, but at least we had somewhere to stay and we could get out of our soaking wet clothes. After a cuppa and a bite to eat we set off for a roam around Warminster.

It’s a small market town and not a whole lot to see, but there were some lovely old historic buildings.  It was a nice little town to stroll around, despite getting rained on again when we’d forgotten to take a coat or a brolly with us – why don’t we learn?! 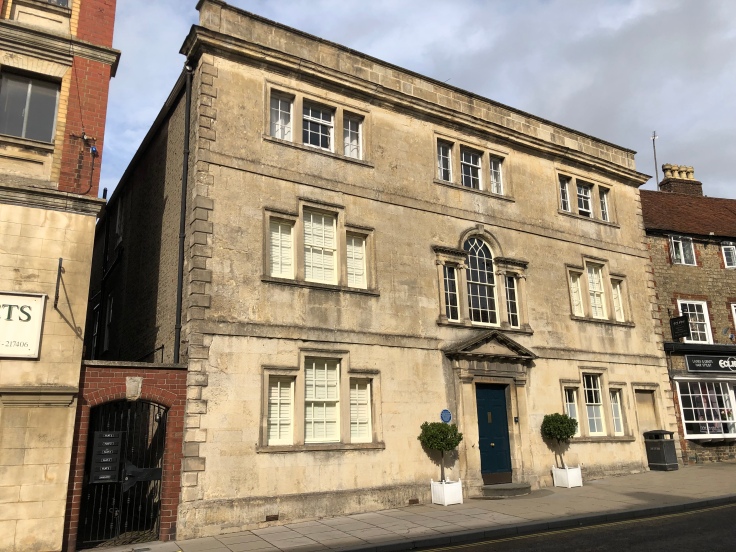 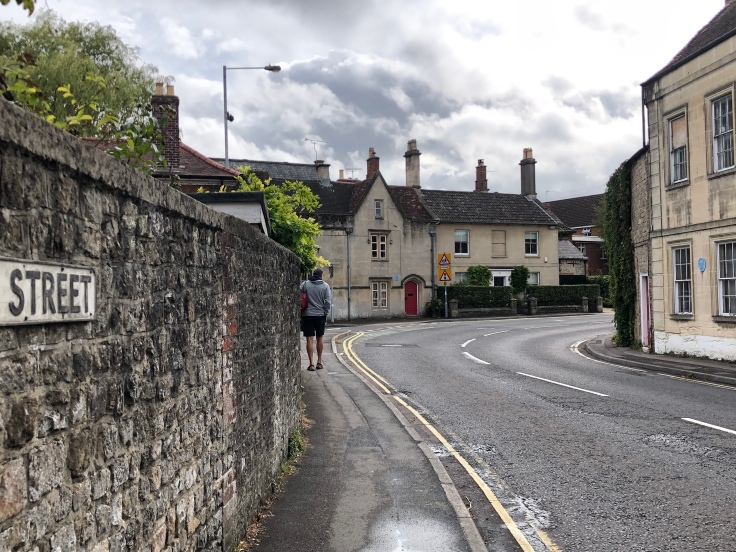 So that was the day. It started out very easy, very gentle and very cruisy along the canal and ended a bit rushed and a bit hectic and a bit busy on roads and in traffic, while staring down a ticking clock. Still…it was another great day in my book. It still had all the best bits – a nice place to ride, scenery and friendly people and then a nice little town to look around. It ticked all the important boxes for me. So we’ll continue tootling along tomorrow, no more paths around that we can see, so we’ll be back on the road. We’ll just have to wait and see if we’ll be cruising or racing. There’s that element of surprise again. Gotta love that!

Time in the saddle: 2 hours 36 minutes

Weather: drizzle on and off all day 12C along the canal, then it got to 15C