After another quick run on the treadie this morning, we packed up, set off and hit the road. We were going to continue along the Wild Atlantic Way heading north. We motored off, away from Limerick, deciding not to repeat the battle with the traffic and streets of yesterday. That experience had me breaking out in a sweat and I was only the passenger! Steve did a champion job of swinging the van through all the one way streets and roundabouts, but today we decided to leave the city behind and go wild again.

Up the coast we went, into the grey and the mist, which was perfect for the location we were heading to, the rugged and towering Cliffs of Moher. The cliffs range for 8km over the Atlantic Ocean and are 214m high at their highest point. 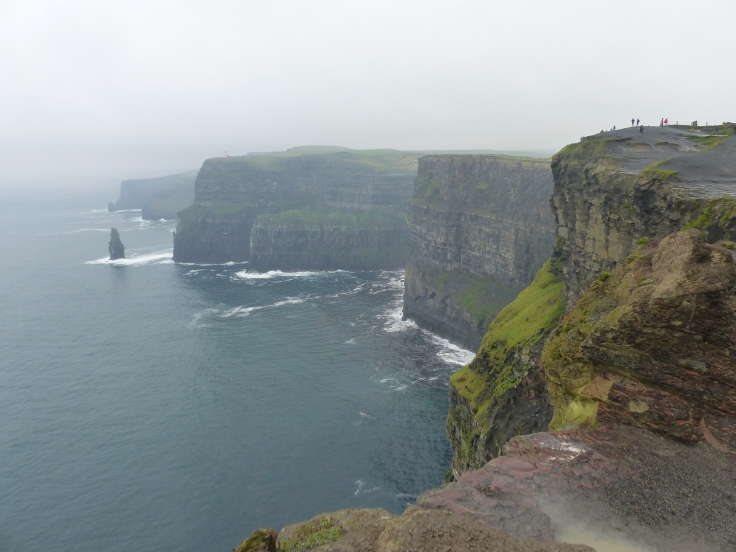 We got into our layers and made our way along the cliff walk, which soon became nothing more than a narrow track. The mist was joined by rain, so as we trudged along the track, we had a small flowing river of muddy water coming towards us. This took some skilful navigation and careful attention to the position of rocks. In some places, the track was just water, with a big puddle to cross. All of us on the same little trek, relied on the good nature of fellow visitors as we walked along the narrow track. We would come to a muddy puddle-lake in the track, with just the hint of a tip of a rock poking out of the water. Who was going to give way? The comers making their way out, or the goers, on their way back? The two lines met, the leaders looked at each other and eventually one person would stand aside to allow the other to make use of the piece of rock as a stepping stone across the water and then the next person would have their turn. There was a very polite dance of the puddles happening along that track…step on…and give way, step on…and give way, as one by one, people in both directions made their way through a puddle in the track by way of a small piece of rock. We joined the dance and made our way along the track, right by the cliff edge. I did notice an awful lot of people were wearing shoes that looked very new and very clean and very white and I couldn’t help but feel for them because those shoes would be none of those things by the time they got back from their walk. We, along with most other folks, were splashed with mud, either by ourselves slodging along the track, or by others splashing us as they passed by. It was not a day for best footwear! 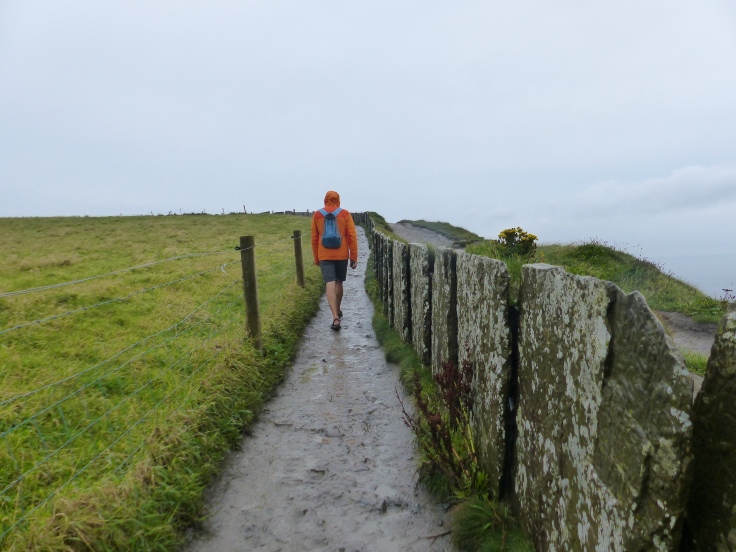 The track was literally at the edge of the cliff in some places, no barriers, no fences, no marked path, just the cliff top and the rocks and waves below. I stepped near the edge to get some photos and just looking down set the head spinning a bit. Then Steve took a look down.

“Ooh, that was a bit close to the edge,” he said as he stepped back.

“No, there was just nothing there, just the edge and then air.”

We didn’t get too close, we did keep a safe distance, but even looking down from a few feet away was a bit disconcerting. 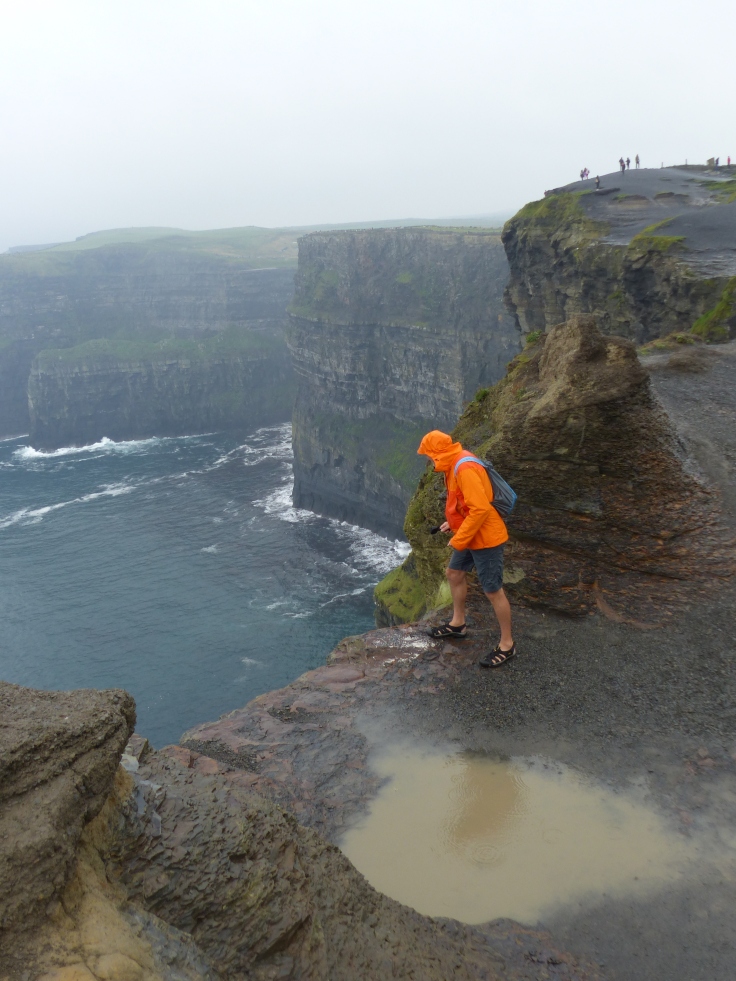 We discovered the cliffs were formed about 320 million years ago when a large river flowed down to the area, bringing mud and sand with it. The river eventually dumped all of that mud and sand, where it settled and formed the rock layers that can be seen today. The Cliffs of Moher are also home to puffins during their breeding season, which unfortunately has ended, so no puffins to be seen. I don’t think we would have spotted any anyway, because it was very grey and very misty. 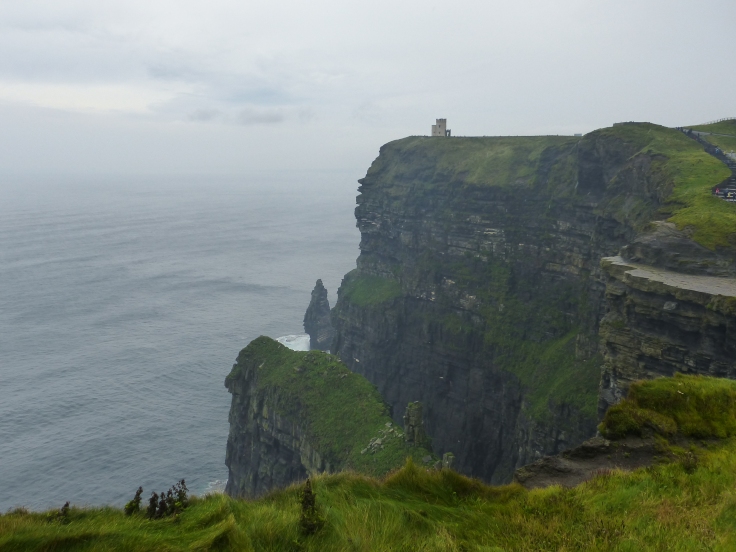 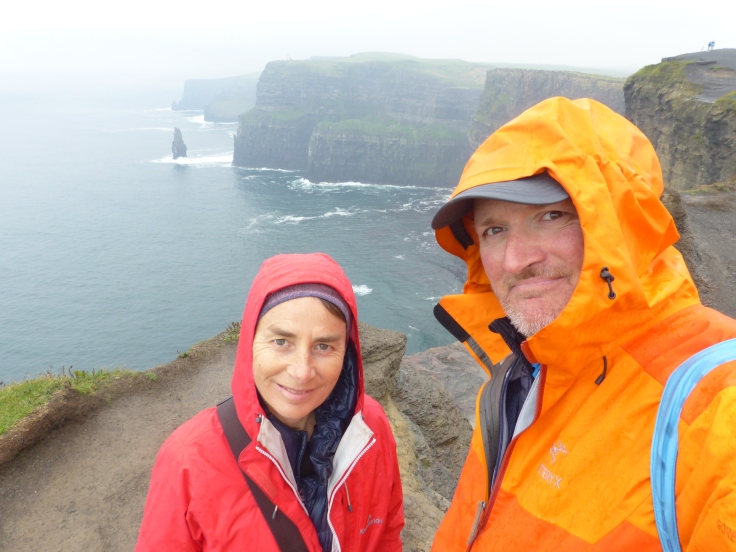 Carefully making our way back along the track, we took ourselves up to the other side of the cliffs, where there is a tower that was built in 1835. Even back then, the cliffs were a popular place for visitors and O’Brien’s Tower was built by one Cornelius O’Brien as a viewing point for tourists.

We stood, looking out at the cliffs and down to the sea and even had a feathered friend join us. It landed on the wall right beside me and chatted away, cackling and warbling and having quite a lengthy conversation.

Cliffs suitably viewed and traversed, we hit the road again. The cliffs were definitely worth a trip although we both said that Mizen Head got our vote and scored higher as a place to visit. Fun fact…we also discovered that the Cliffs of Moher were a filming location for Harry Potter and the Half Blood Prince.

We passed through Ennistymon, a lovely little town that didn’t appear to be on the tourist map because there were no crowds and we strolled along the street with its lovely coloured buildings. The town dates back to 1659, when there were just fifty eight residents. We walked beside The Cascades, where the Cullenagh River rushes over a ridge of rocks and once again, we had a feathered local join us. This time, it decided the falls looked like a top spot for a paddle.

Fun fact…we also discovered that the TV series, Father Ted was filmed in Ennistymon. Off we went again, with fields and coast beside us, passing ruins and stone buildings along the way.

Steve then decided to put some music on, so on went the radio and over the airwaves came a medley of 80’s hits. Well…you should have seen us. Picture the scene…outside the van are sweeping vistas of green, with gorgeous dry stone walls dissecting the countryside, rugged rocky hillsides and sea and coastline lining the road ahead. It was stunning. Inside the van…two tuneless warblers belting out songs from their high school days, complete with swaying heads, voices to the sky and the classic “shoulder shuffle”. Pan to the outside…peace and stunning scenery…pan to the inside…a scene that could only have you rolling your eyes, as the two of us sang and swayed and “seat danced” our way along the coast. I can’t begin to describe the sight of us when The Time of My Life came on. Patrick Swayze and Jennifer Grey had nothing on our moves, even though we were sitting down and one of us was holding a steering wheel and the other was clasping a camera, periodically hanging out the window for a shot. Those were no impediments to our performance at all…I mean…no one puts us in a corner!

We slowed right down as the 80’s power ballads took over, we lost some mojo and once again, the scenery took centre stage. We passed by the most amazing landscape of rocks. They stretched as far as they eye could see, right down to the water and all the way over the hills in the distance. Apart from being absolutely stunning and quite beautiful, it had an amazing post-apocalyptic look to it.

We discovered these were the Burren Rocks, which were formed between 359-299 million years ago. The rocks are limestone and shortly after the limestone was deposited, the continents collided, causing the rocks to fold and then about two million years ago, during the ice age, the ice caused the rocks to split and crack. It really was quite a spectacular environment. Apart from the fact there are no volcanoes around, I thought it looked like a lava field, because it was so expansive, it looked as if lava had flowed down the hill, cooled and set, because the rocks just spread out as if they had spilled over the hills and stopped at the edge of the sea.

We motored on, passing through the lovely little town of Ballyvaughn, with its small harbour lined with stone walls and pretty cottages through the village. 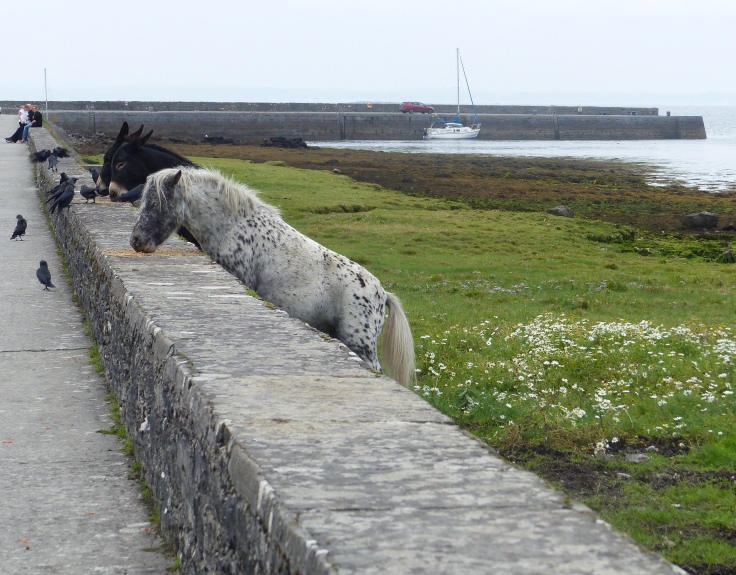 With the day getting on, we found a place to stay, just east of Galway and that was our day. We had some very speccy scenery indeed today, with the Cliffs of Moher and the Burren Rocks and then the “ordinary” scenery out the window of fields and coast and ruins. It was all just magic. Perhaps not a word that could be used to describe the vocal accompaniment that was being provided from inside the van! A top day, with some rambling in the mud, weather that was grey and wet but perfectly atmospheric for the location and more stunning scenery all around. Weee haaaad the time of our liiiiives… [insert eye roll here]!

4 thoughts on “Stunning On The Outside, Eye-Rolling On The Inside”