Following the Wild Atlantic Way route is taking us into the wild west of Ireland, into just the scenery we’ve been wanting to find and it certainly delivered today. We had rocky hills, rugged coastline and sweeping, panoramic views. Magical.

After some early rain, the day became an absolute ripper with the sun shining, as we made our way onto the Wild Atlantic Way. We cruised along, wending our way along the narrow roads, sweeping past hedgerows and hugging the winding corners. It’s a route we’d thought we would be cycling at one point, but I’m actually glad we’re not. I certainly would have felt pretty vulnerable on those narrow roads, with the constant blind corners and overhanging hedges making it hard for drivers to see what’s ahead around a corner or over the brow of a hill. With our wide load, I would have felt like we were going to be collected by every passing car. This way, we may not be able to stop as often as we’d like and we can’t take the sort of photos we’re wanting to take, but I have to admit, I’m prepared to accept that for the fact that I’m not feeling like a sitting duck on a winding, narrow road.

We passed through the little town of Ballydehob, a sleepy little place beside a river, with some interesting wood carvings and stone bridges.

On we went, through Schull and then along the coast, with those amazing rugged hills beside us, sometimes with a single house perched on the hillside or a cluster of houses dotted along the slope. We had the stark rocks of the hills on one side and the water on the other, looking down on bays and inlets with boats moored, or across at small towns along the water’s edge. 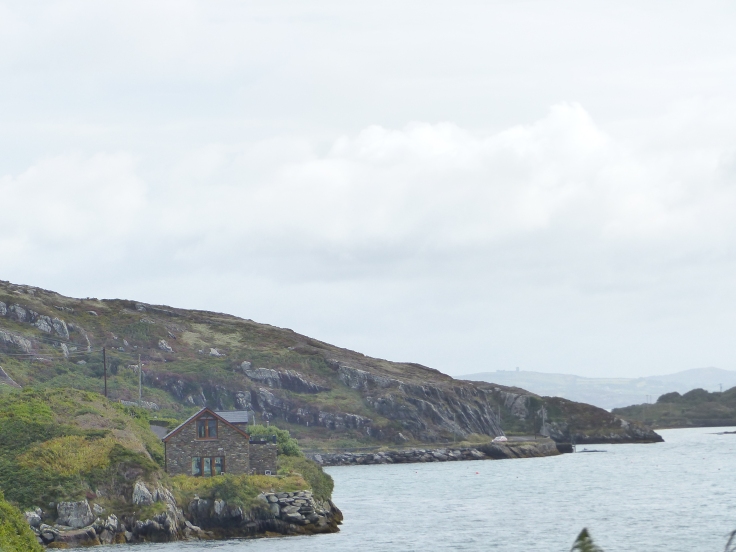 With me constantly asking Steve to stop whenever he could, so I could take photos, we eventually found a spot to pull over and I got out for a look across the water and rocky outcrops. As I walked through bracken, along a grassy track, I discovered the Alter Wedge Tomb. The information board beside it told me it’s an ancient stone tomb, that was first constructed at the end of the Stone Age, around 3000 to 2000 BC. Archaeologists have found burnt bones inside and carbon dated them to about 2000 BC. It’s thought to have been used as a sacred place and for rituals for over 4000 years, with people leaving offerings inside to honour their ancestors. Then, in the 18th century it was used by priests when it was illegal for Catholics to hold mass in a church. It was such an interesting thing to find and amazing that it’s still there, standing for centuries, undamaged, looking out at the hills and Mizen Head in the distance. 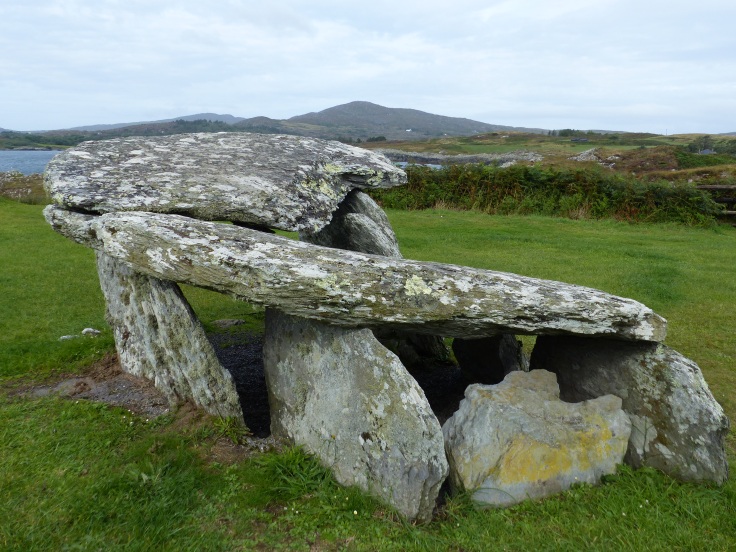 We continued on further south and further west until we arrived at Mizen Head, the most southwestern tip of Ireland. There is an old signal station there, that was built in 1909 and was originally a fog signal station. There’s no lantern and the light used to be mounted on a freestanding pedestal out in the elements. In 1931 the signal station had the first radio beacon in Ireland, that aided ships with navigation. This was such a great place to visit. There are paths up and down and along the cliffs, so we could walk up to the old signal station, across a bridge that sits between two rock faces, high up on the cliff and looks down on the crashing waves below. 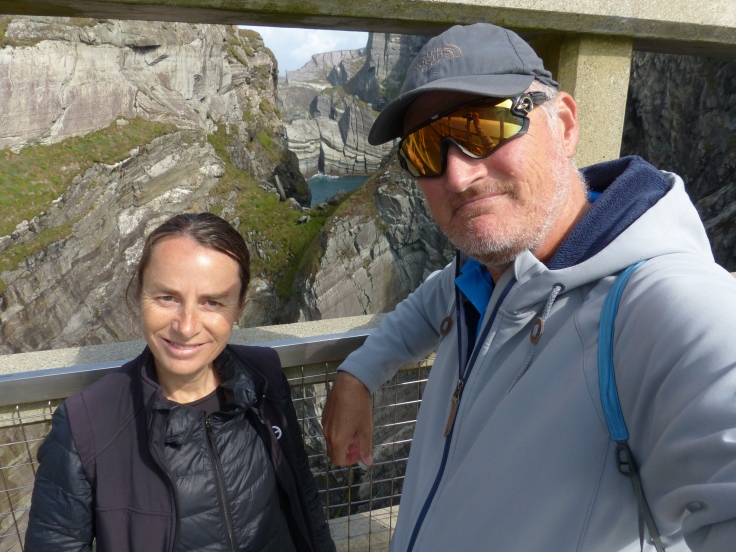 We walked along the paths, up to the signal station and then out to a cantilevered platform jutting out from the cliff, high above the sea and rocks. The views were amazing, whether looking up and out, or straight down. 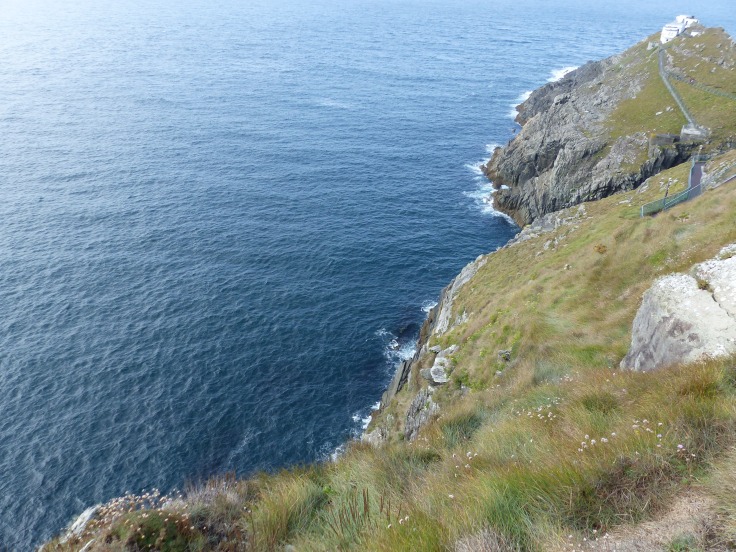 We walked down a steep path to see the arched rock formations and boy were those paths steep! On the way down I adopted a highly technical strategy that rates very highly on the “How To Look Like A Pillock Scale” which I like to call my ‘Charlie Chaplain Penguin in the Final of a Limbo Competition’ move. To stop from pitching forward on the steep descent, I leaned back like a Limbo champion and walked with my toes out and edged down with little steps, pitter-pattering my way to the bottom. Dignified it may not be, but successful it was. That took us about half way down the cliff and we could look across to the arches in the rocks and the waves crashing around below. On the way back up, it was almost a reverse manoeuvre as I leaned forward a little and had to get on my tip-toes to pitter-patter step my way back up. Then, we decided to detour off the sloping path and instead take the ninety-nine steps option, back to the top. It was so steep, people aren’t allowed to take the steps down, so they’re only an option to go back up, so up we went, counting as we climbed. 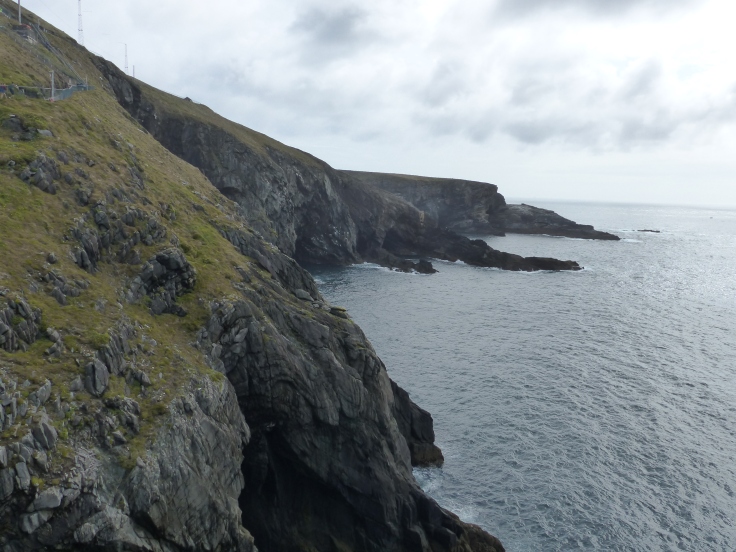 Mizen Head was a fantastic place and I’d definitely rate it above The Giant’s Causeway as a place to visit. The rocks and crashing waves and the way we could get up the cliff and walk across that bridge and then go down low towards the water, was all completely brilliant. Well worth getting all the way south and west to find it. Before heading off, we sat at a table, looking out over the water for a late elevenses.

On we went, through the little town of Bantry, another pretty little town sitting on Bantry Bay, with its streets lined with traditional, independent stores and those gorgeous coloured buildings.

For our onward journey we had to use no-tech navigation and just follow the Wild Atlantic Way signs because we had no service on our phones to be able to use our maps. This has been a problem since arriving in Ireland and we’re flummoxed as to why it happens. We have three bars of signal and 4G showing as our coverage, yet the network just won’t work, even in the middle of towns. We’ve tried different network providers and still no reliable coverage. So even though we were in the middle of Bantry, with our phones showing signal and coverage, we had no working internet, so the road signs came to our rescue. As we motored on, I sat with two phones, trying everything to get them to work, as their signal strength was telling us they should, with no luck. This was creating a problem with finding somewhere to stay and booking anywhere ahead of time, so eventually we just pulled over and sat there, turning phones on and off and trying to get some sort of signal. Then we noticed we were parked across the road from a hotel and we also discovered that they have excellent wifi because our phones were picking up a faint signal from quite a distance. That was enough for us to discover that the very same hotel had rooms available that weren’t crazy expensive (we are also discovering that Ireland is a very expensive place to be) and with the day getting on, we decided to cut our losses and stop driving with no means of researching anywhere and just drop in across the road. This was another moment of success for the Van Plan. Where we’d driven today, the towns were very few and far between and accommodation options very thin on the ground, add to that a lack of internet availability to find where the nearest digs might be and had we been on the bikes, it would have been a bit disconcerting. The Van Plan enabled us to find somewhere last minute, despite the challenges of availability and recalcitrant phones.

After checking into the hotel, we actually discovered that it’s quite an interesting place. It dates from 1745 (although we can report it has been refurbished in the intervening centuries!) and from 1918-1920 it was leased to the British War Office as a place of rest for soldiers injured during the First World War. It’s also had some quite notable guests over the years, with the writer William Makepeace Thackeray staying here in 1850 and George Bernard Shaw staying in 1910-11, doing quite a bit of his writing during his stay. Then the poet, Yeats was a regular visitor in the 20’s and the actress from the ‘Golden Age’ of film, Maureen O’Hara was also a regular, so much so that there’s a chair in the lobby known as “Maureen’s Chair”. Then, as a more modern claim to fame, Pippa Middleton stayed here in 2017 while she was attending a friend’s wedding. So, we just happened to stop in front of some quite notable lodgings, where we found ourselves a resting place also chosen by some famous figures.

It was another great day and we got to see some of the Ireland we’d hoped, with the rugged landscape, small towns and villages and sweeping, panoramic views. Just magic. We had been told to “go west” and this side of the island is certainly delivering on scenery and experiences. The Wild Atlantic Way is taking us to the “wild west” that is wild in landscape, but wonderful in scale and sights. So…we continue on, just waiting to see what’s around those hidden, winding corners…into the wild we go!

One thought on “The Wonders Of The Wild West”