Sunshine! Yep, we were greeted this morning, most definitely, by sunshine! We stepped outside and soon realised that sunshine doesn’t necessarily mean it will be warm, because it wasn’t. A definite nip in the air and a partying wind a blowin’ but clear skies and it all looked set for a fab day.

We sat in the breakfast room of the B&B and when the very nice lady came to serve us, she asked what we were up to today.

“We’re heading for Waterford,” I said, “we’re going to get the bikes out and go for a ride on the Greenway.”

“Oh, lovely, it’s beautiful, you’ll love it,” she said, “I’m going to do that myself, you’ll have a lovely day, it’s beautiful the Greenway, I hope it won’t be too hot.”

She walked off to work her breakfast magic and Steve and I looked at each other. Too hot? Ummm…too HOT?! No, no I don’t think we have to worry about that, I don’t think it will be too hot here…ever! It did give us a smile, because of course heat is all relative and we knew it would definitely not be too hot for us! Still, being told it was a beautiful place to spend some time, was a nice assessment to hear, as we got ready to hit the road.

We pointed the van in the direction of Waterford and of course we took a wrong turn…again. So we ended up on the “alternative route”, which took a little longer but we got there in the end. As we crossed the bridge, Waterford looked like a nice town, sitting on the river.

We parked, gave the bikes their freedom from the confines of the van and set off along the Waterford Greenway. The sun still shone, the wind still blew like billly-o but it was a fantastic place to ride. We joined the multitude of others out cycling, walking or running and the smiles, “hellos” and “good mornings” were coming thick and fast from the people we passed. The Waterford Greenway follows the old railway line that once ran from Waterford to Dungarven and has been turned into a brilliant, flat, sealed, traffic-free path for walking and cycling. 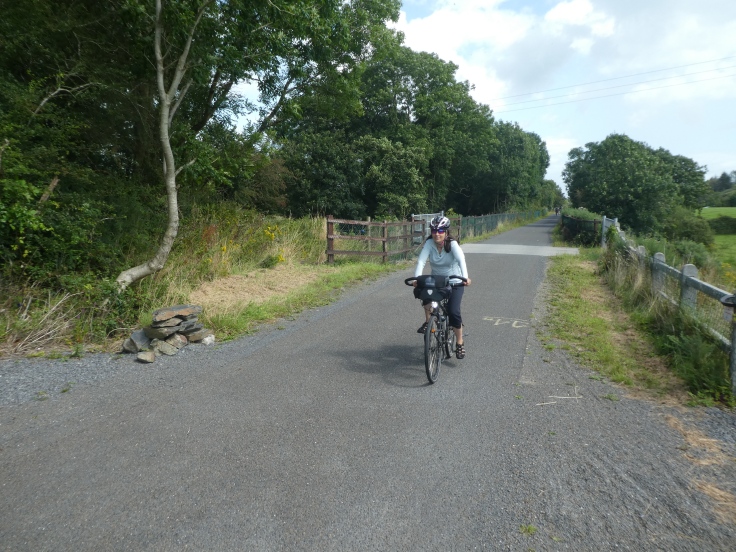 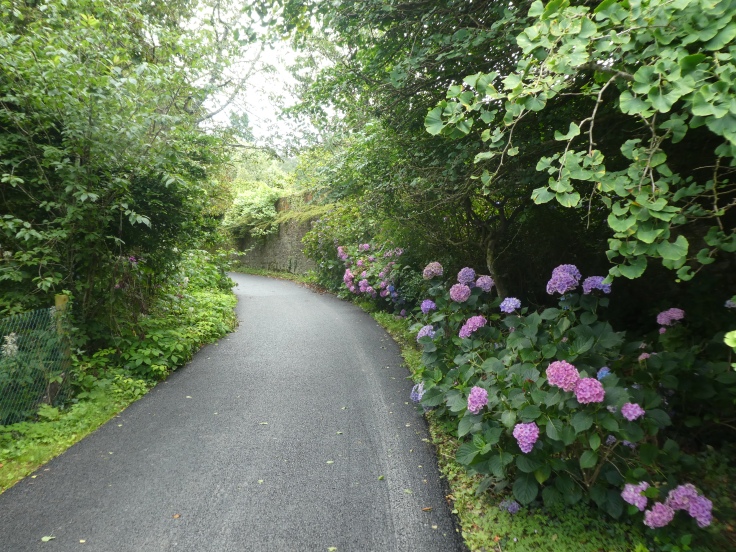 We rode beside the rail line and stopped beside the path for a late elevenses. As we sat, the heritage train came chuffing along the line and everyone was having a marvellous time. This little train runs along a short section of the old rail line, taking people on a short trip up and down the line. The railway itself dates back to the 19th century. We pedalled on…then it rained…then it stopped, so it was going to be another one of those days with some sun and some rain all day, but no matter.

We pedalled under railway arches, past a ruined castle and past remnants of the Greenway’s former life. 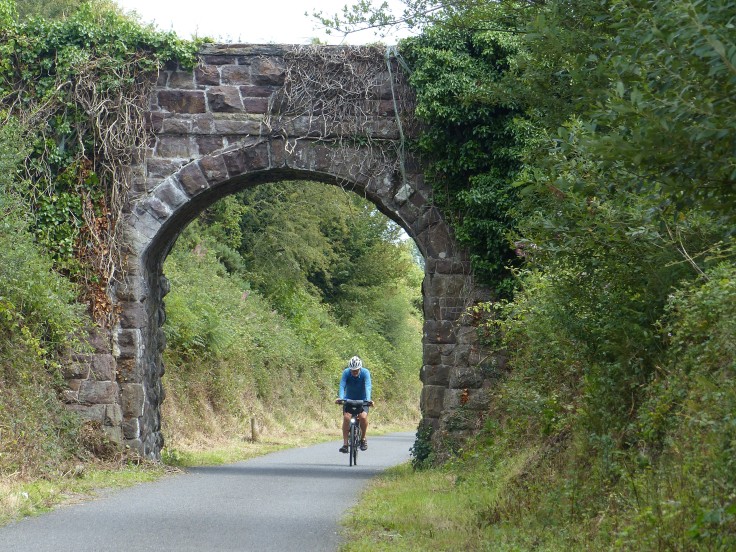 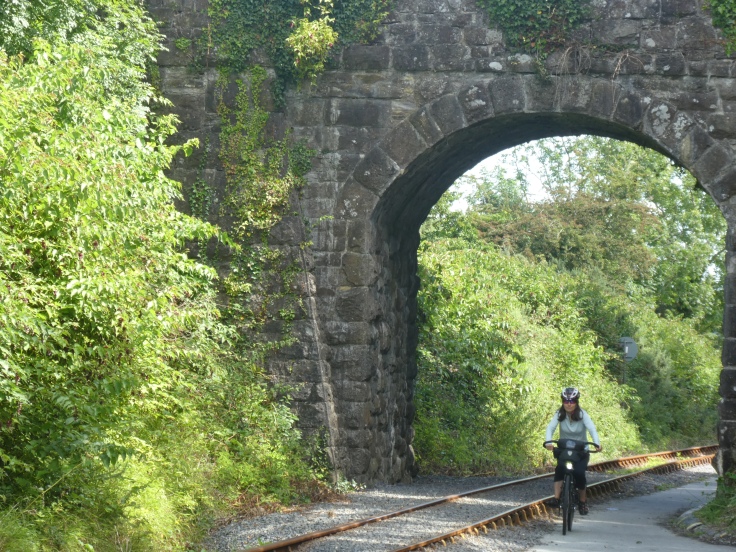 A row of old lime kilns came in very handy when the rain came down again and we could seek some shelter and get slicked up once again. These were once used to burn lime for farming and whitewashing houses in the 19th century.

The whole Greenway is a point-to-point path and with no means of making our way back, we couldn’t do the full length, so we went part way, turned around and pedalled back. The ride out was into that fierce headwind, so the ride back was a turbo pedal with a ripper tail wind. I got up to 31.6 km/h at one point, just rocketing along with the gust at my back.

As we neared the end, I saw a plaque set into the rocks beside the railway line. What’s that I wondered? Is it saying there is something medieval there, or maybe the site of a Viking artefact? No, something much nicer than that… 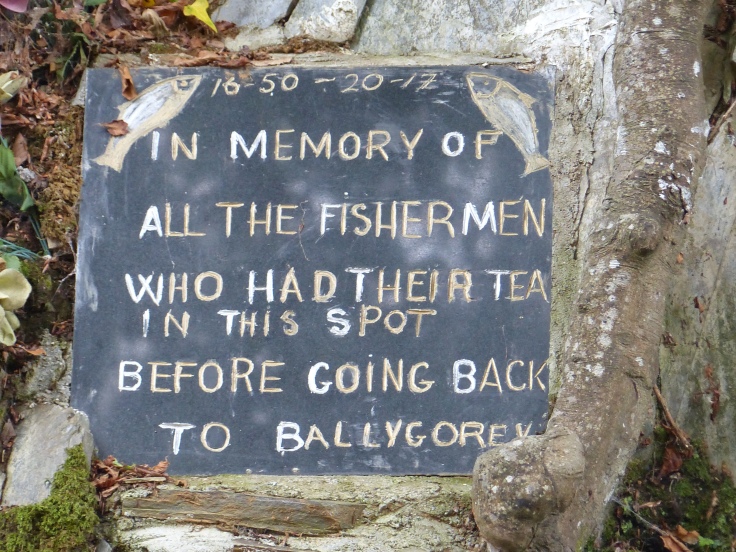 When we made it back to our starting point, we stabled the bikes in the van again and set off for a roam around Waterford. As we made our way into the town centre, we heard music playing and came across a band entertaining a small audience. We stopped to watch and boy did we smile. There’s something about a group of middle-agers (and I say that in full knowledge that I wear the badge of post-middle age myself), rockin’ it out to some 80’s soft rock classics, while taking their performance very seriously indeed, that can only make onlookers like ourselves smile with amusement! I’m sure we weren’t supposed to have smiles on our faces as we watched them thump out You Give Love A Bad Name, complete with fist pumps and lip biting and head banging, but I’m afraid, we were the ones in the crowd grinning rather broadly! Plus, with a band name like “Sleeze”, what’s not to smile about?! 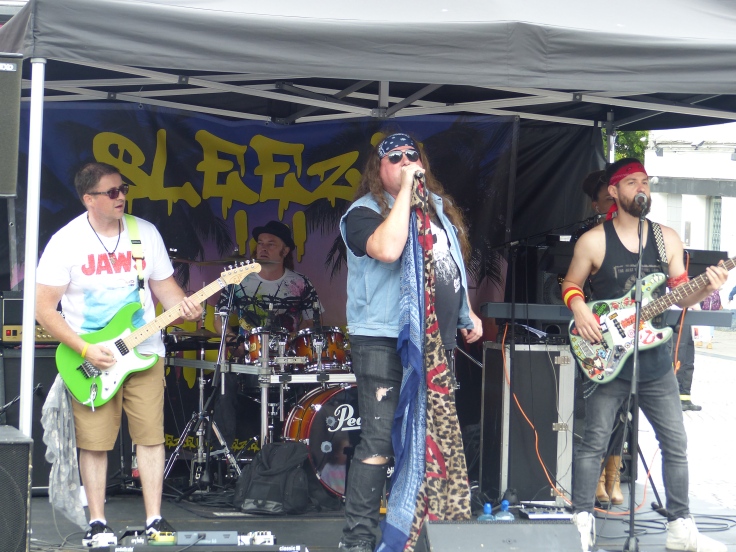 Having been fully entertained for a few minutes, we wandered off into the streets of Waterford and saw some of its history, heritage and nooks and crannies. Waterford is Ireland’s oldest city and was founded in 914AD by Vikings from Norway. The Viking, Regnall, built a Longphort  (ship’s haven) here and over time, it grew into a city. Regnall actually became the first Ruler of York, after sailing from Waterford to York  in 918. There have been Viking artefacts found around the area and the city is obviously proud of this history, with various Viking symbols and points of interest around the town. In fact, Waterford takes its name from the Norwegian Viking name, Vadrarjfordr.

Our roaming took us through parts of the city’s history and its modern day features. It is, of course, famous for its crystal, so we also had a look at the Waterford showroom. I kept my hands very close to my sides! You really don’t want to be bumping into any of that! 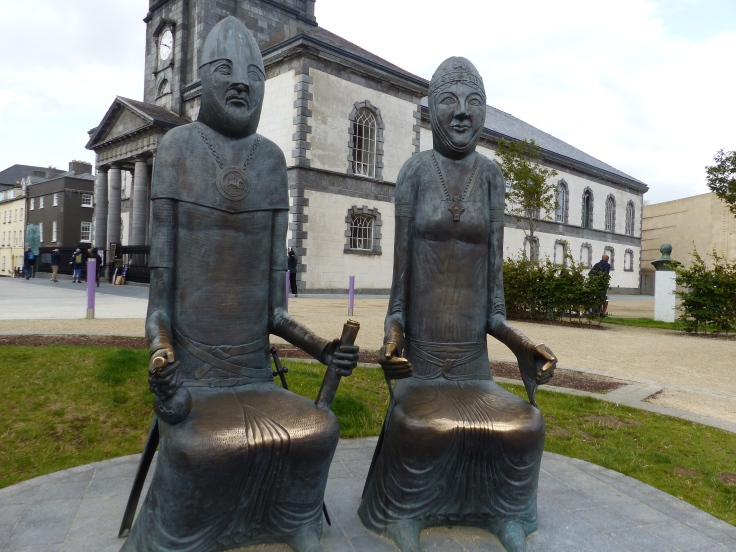 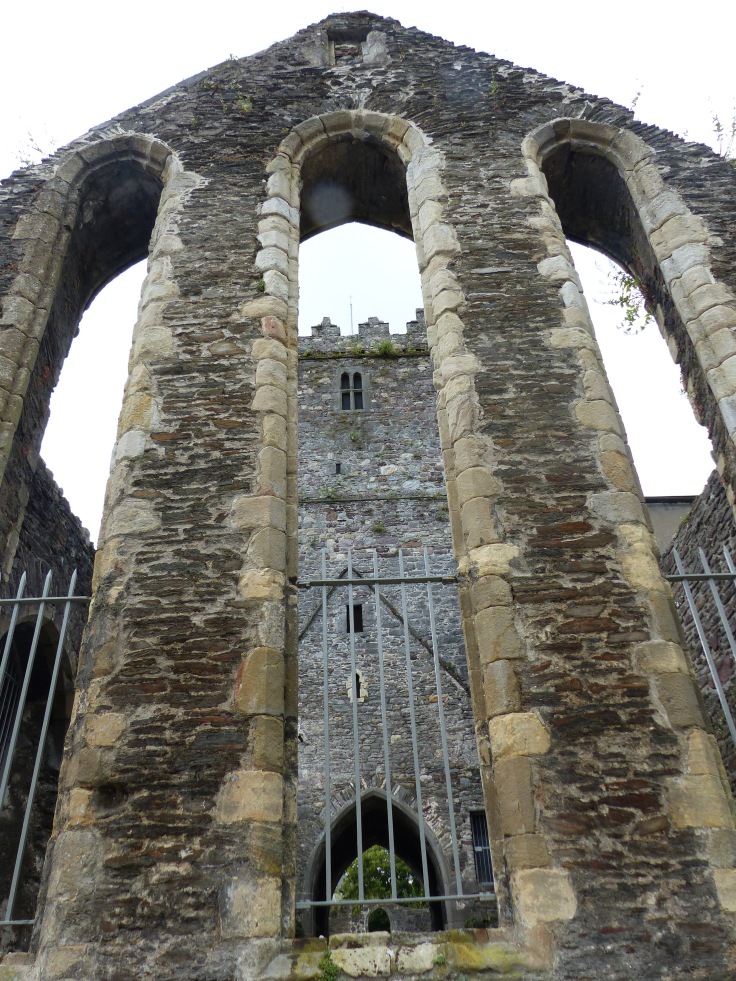 We also saw a quite simple, but poignant memorial to a former son of Waterford. John Condon lived in Waterford and enlisted as a Private in the First World War. He fought in Flanders with the Royal Irish Regiment and was killed in action during the Second Battle of Ypres. John was 14 years old when he died and is the youngest known battle casualty of the war. Known as the boy soldier, his grave in Belgium is one the most visited allied war graves in Europe.

We roamed past some lovely old buildings, some fantastic street art and more sites of Waterford’s history and heritage, before making our way back to the van and some shelter from the rain and wind. 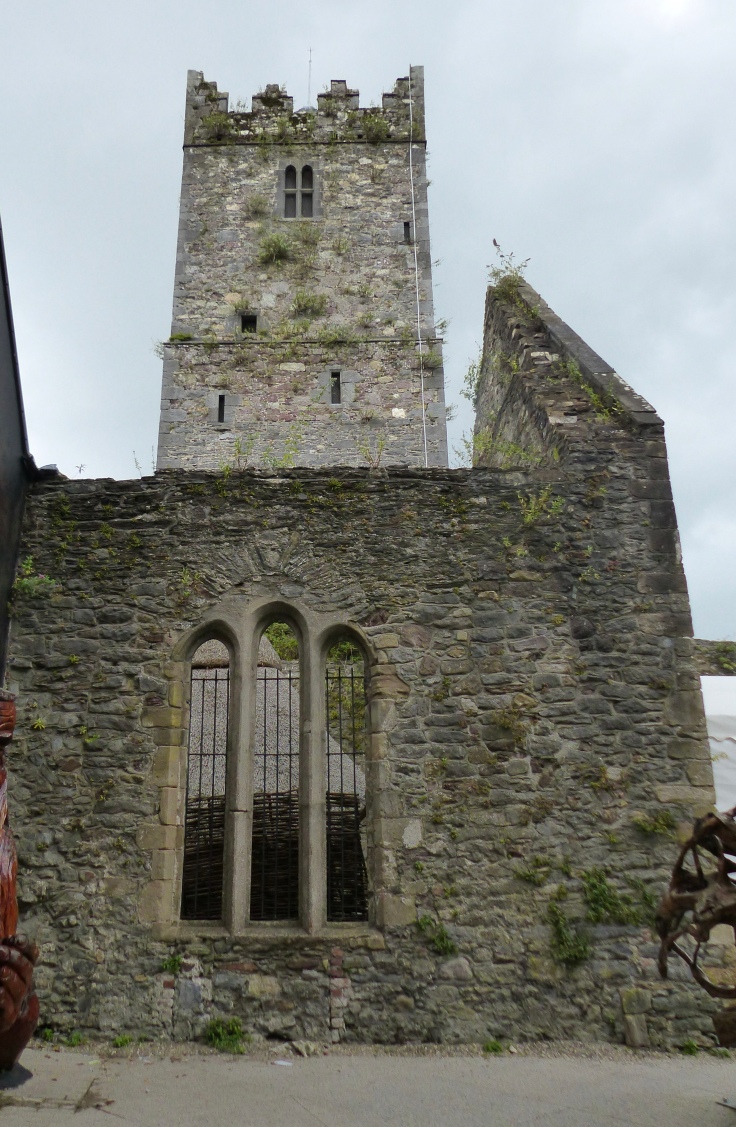 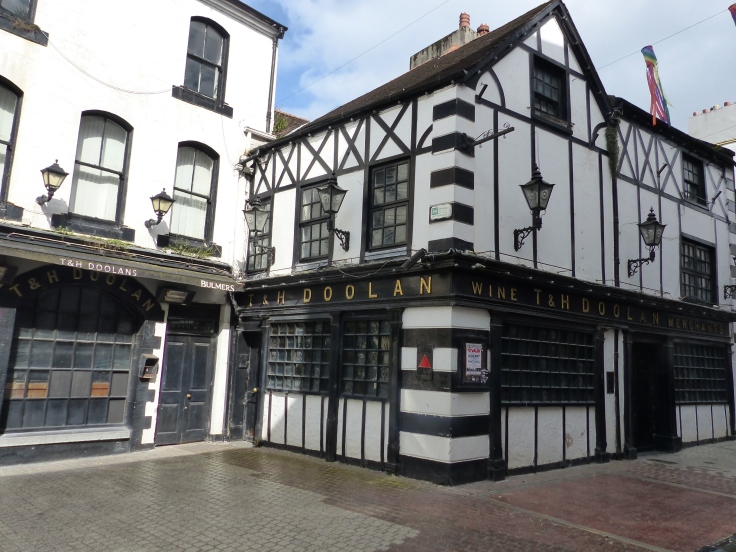 On the way back, I saw another blue plaque, which gave me another smile for the day. Blue plaques are everywhere in the UK, usually on buildings to say “so-and-so lived here” or “Charles Dickens ate a pork pie in this house” or some such historic claim to fame. I love spotting them and I wish we had them in Australia, because the fun facts they give are brilliant. Well, this one was a claim to fame that lifted the corners of my mouth. I can now say I saw the former home of those we have to thank for the cream cracker! 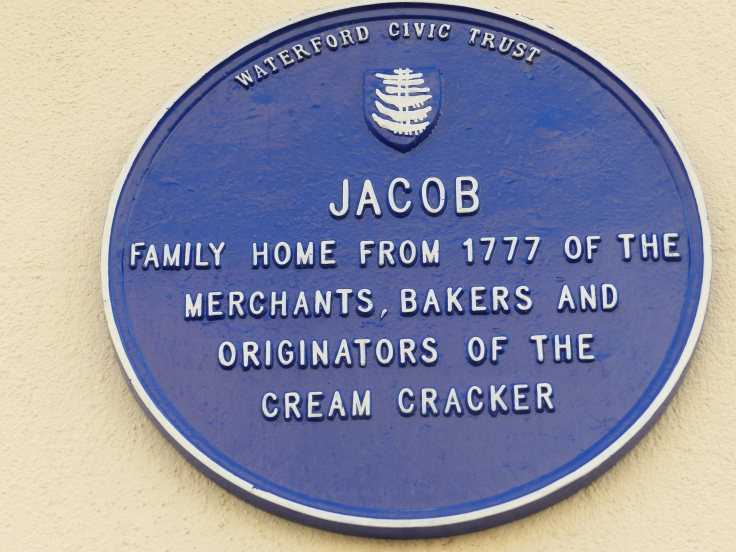 It was a great day and one that enabled us to fully implement the Van Plan. We were able to make our way to a nice place to ride, with scenery and no traffic, then to a place that was worth a roam and when the day got late and the weather cracked up, we had the security of our four-wheeled base to get shelter and a means of finding a place to stay. That’s how we planned it to be. The Waterford Greenway sure was a top place to pedal and we could tootle along, with smiles and greetings from our fellow passers-by, looking left and right at the scenery or pieces of history, all fabulously traffic free. It blew and it rained, but that didn’t matter because it was just a great place to be. Our friendly lady at breakfast was spot on, it was a lovely place to ride, we did enjoy it and, I can officially report…we did not suffer from the heat in any way shape or form…no heat…no heat to be had…cool was the order of the day and that was just fine…fair dinkum fabulous in fact!

Time in the saddle: 1 hour 49 minutes