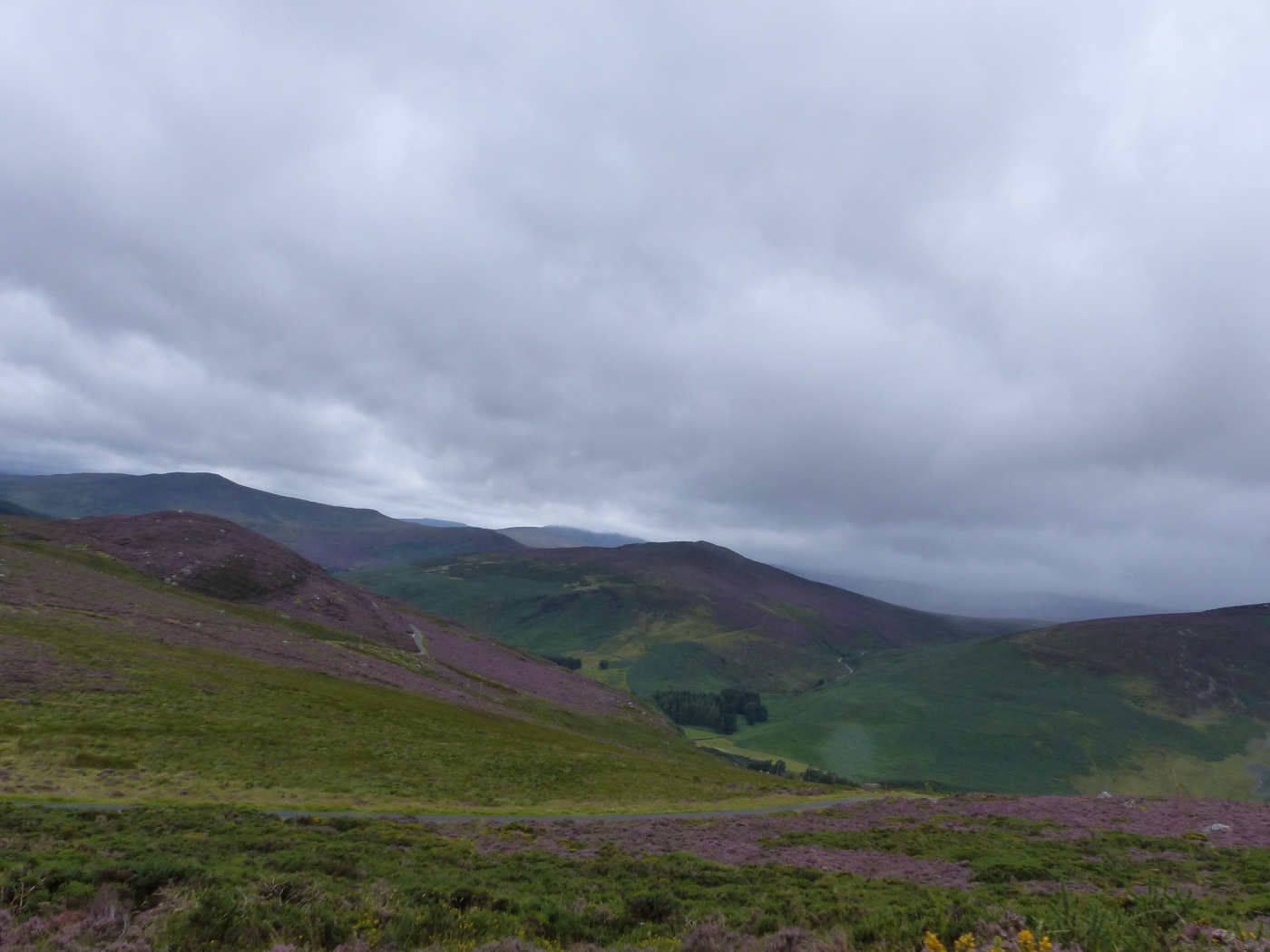 Hills are easy when you have an extra pair of wheels. Hills are also easy when you have an engine. We did the hills easy today. Today we implemented Stage 2 of our cunning plan, so today was day one of the “Van Plan”. If there was going to be a day that would make us feel OK about swapping the bikes for a van for a while, then today was probably it, because we had wind and we had rain right from the get go.

We pedalled out into the wet, grey, windy, busy streets of Dublin to make our way out of the city centre, to the outskirts where we’d pick up the van. We were in the thick of traffic once again, climbing some hilly streets and eventually came to a cycle path beside a canal for the last kilometre. The only hiccup was, this path had barriers in it and one in particular was way too skinny for the likes of us. There was a fella in front of us, just with a regular bike and it still took him some sideways manoeuvring to get it through, so no hope with a wide load like ours. Beside it was our alternative and this was one of those doozies with the swing gate, so you have to swing it one way to get in, then shuffle around and swing the gate the other way to get out. Steve went in and it took him a while to fit the bike in the space, then swing the gate back and forth, lift the bike around and get it out again. I opted to reverse in, so I would at least be facing the right way to get out again. After navigating our way through, riding up the path and doing a repeat performance at the barrier at the other end, we were back on the road and making our way to the pick up location.

Steve went in and did all the necessaries while I waited with the bikes, then we loaded them in, drove up the road to a hardware store to get a variety of straps to secure them in the back and we were finally on our way. We passed through Bray and found a table on a hill overlooking the town and stopped for elevenses.

The rain did its thing and the wind blew and we were at least able to make progress with the elements on the outside rather than in our face and we headed up into the hills. 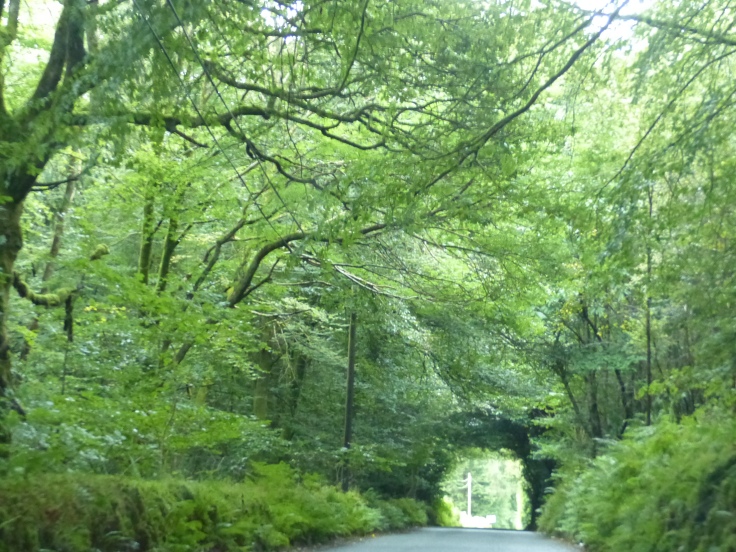 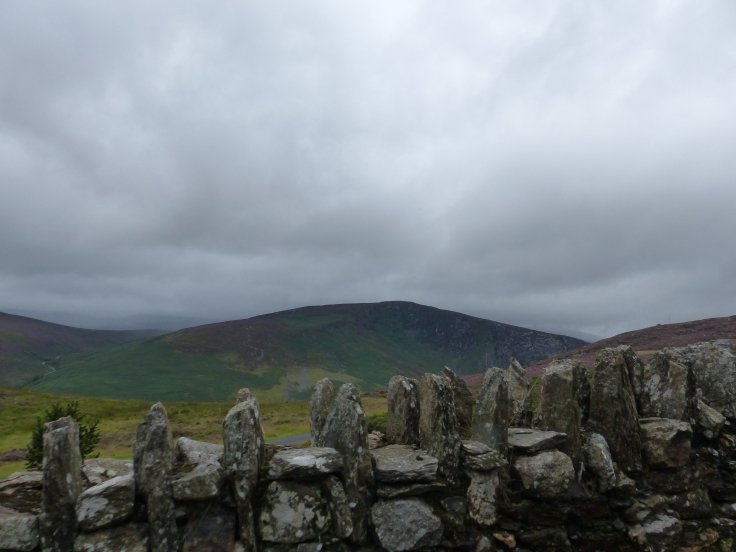 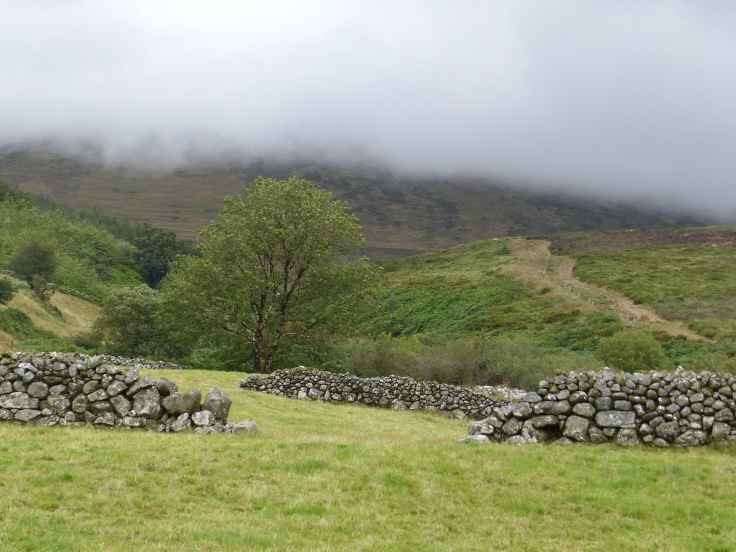 We travelled along narrow, single width roads, which I’m actually glad we weren’t riding on because they were very narrow and cars were hugging the edge to take the corners and we would have been invisible around the bends. If we’d made it without being collected on the bonnet of one car or another I would have been surprised. Up into the hills we went, into the Wicklow Mountains National Park. Of course we took a wrong turn or two, but that’s just us being true to form, but we tootled along through the National park, with amazing, sweeping views of the hills and valley below. We parked and got out for a walk and stood on top of a hill, looking way down to the valley floor and lake below. The colours of the hills and the vastness of the landscape was pretty speccy indeed. The weather was actually perfect because I reckon if you’re going to see a bit of wild landscape, some wild and woolly weather is the best accompaniment. 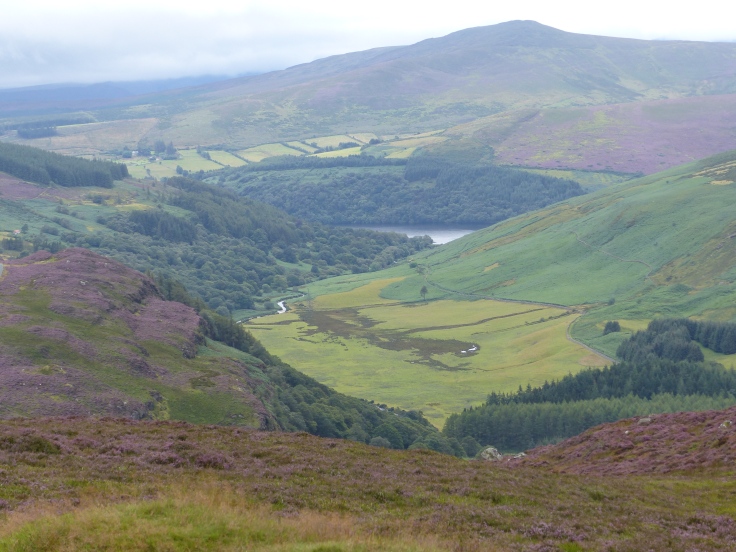 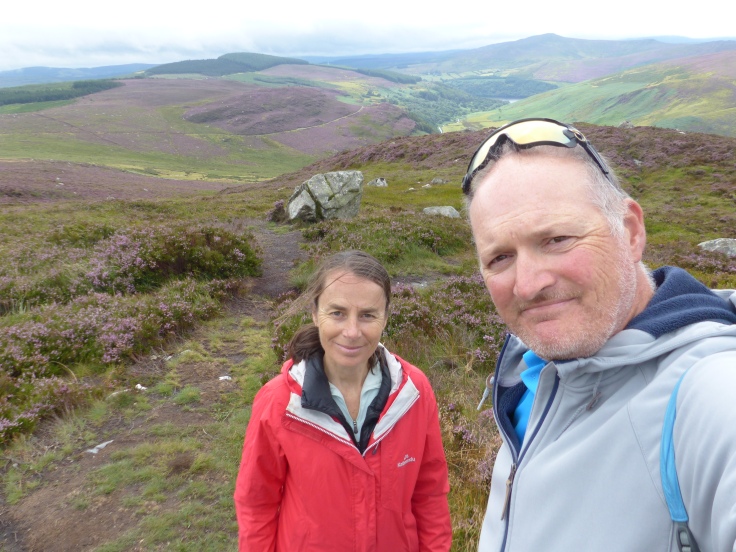 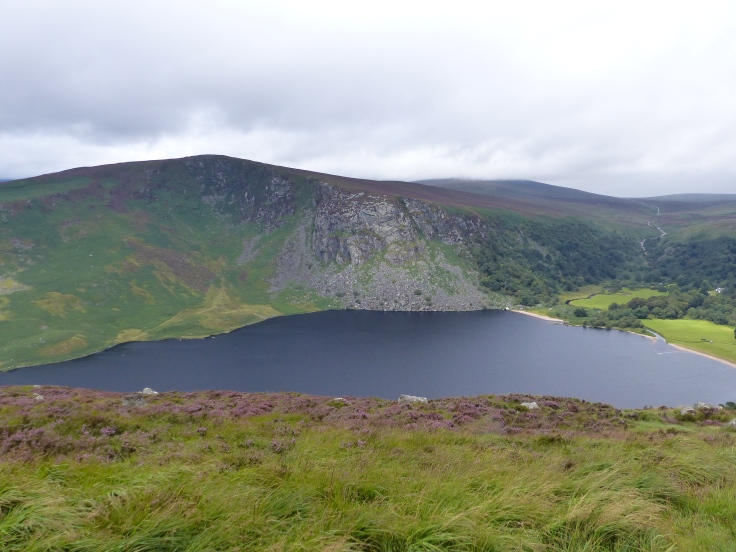 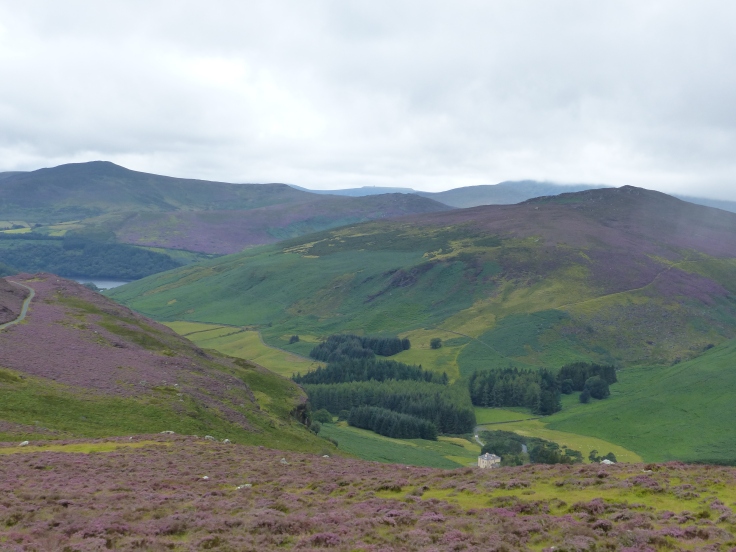 We continued on, through the National Park and then along those narrow, winding roads, through Glendalough and then on through Aughrim. We came to Avoca and this was a definite stopping place. Avoca is where the BBC TV series,  Ballykissangel was filmed, so we went for a walk along the street and it was instantly recognisable. There was Fitzgerald’s Pub where Assumpta ran the bar and Kathleen’s shop and the church where Father Peter arrived before getting sidetracked by Assumpta. We crossed the bridge into the village and it was all just as it had been on the screen. The sun even came out for us, to put a bit of a shine on it all. 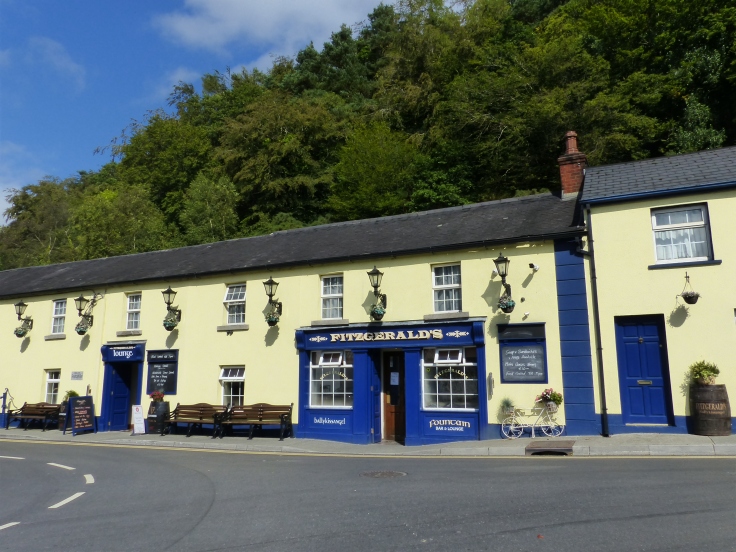 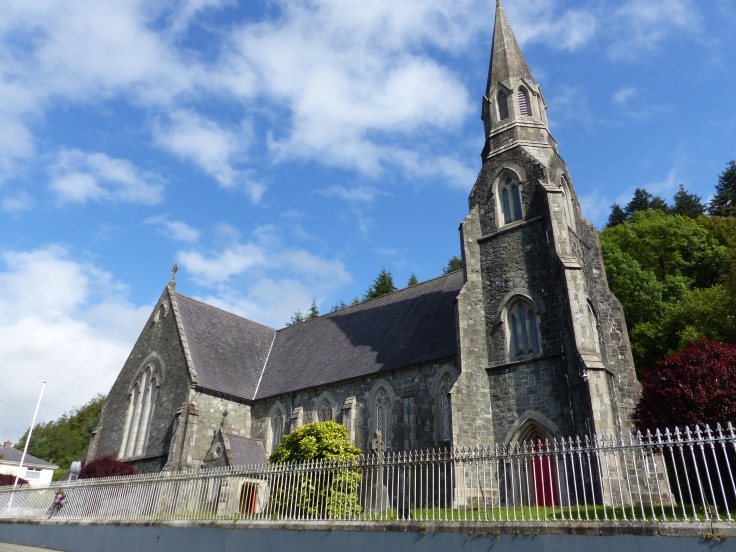 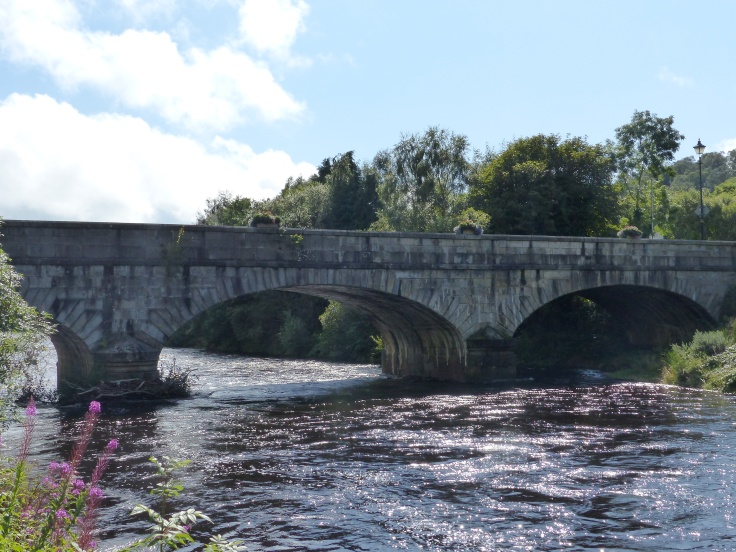 With the day drawing in, we made our way to a pitstop in Gorey, where we arrived to be greeted by a bevy of assorted pooches, which was lovely. We are in a B&B out of town and the owners had a variety of dogs that welcomed us, padded up for a pat and then followed us into our room to make themselves at home. Lovely.

So that was Day 1 of the “Van Plan.” It was actually a good day to be off the bikes, with the woolly weather and the hairy roads, but it’ll take a bit of getting used to. At one point Steve just had to say, “We aren’t going to be able to take photos while we’re moving!” as I called “Stop!” yet again, wanting to snap one scene or another. That’s going to take some adjustment, not being able to just stop whenever we want to capture something right there in front of us. We saw another deer today, right beside the road, but no picture because, well, y’know…van! Still, it’s a means to an end and it’s helping us to see more of Ireland and find necessary digs at the end of the day, so all good in the end. Steve did a top job rattling the van around all those corners on those winding roads and I just sat and gazed out the window, holding the camera in anticipation…just in case. So, day one down in the van and after feeling a bit discombobulated by the whole shift in travel arrangements, we’ll get ourselves sorted and continue to tootle on into Ireland. Up hills, into wind, through rain, even up the odd mountain or two we shall go, doin’ it just a little bit easier for a little while!

2 thoughts on “Hills Are Easy When…”