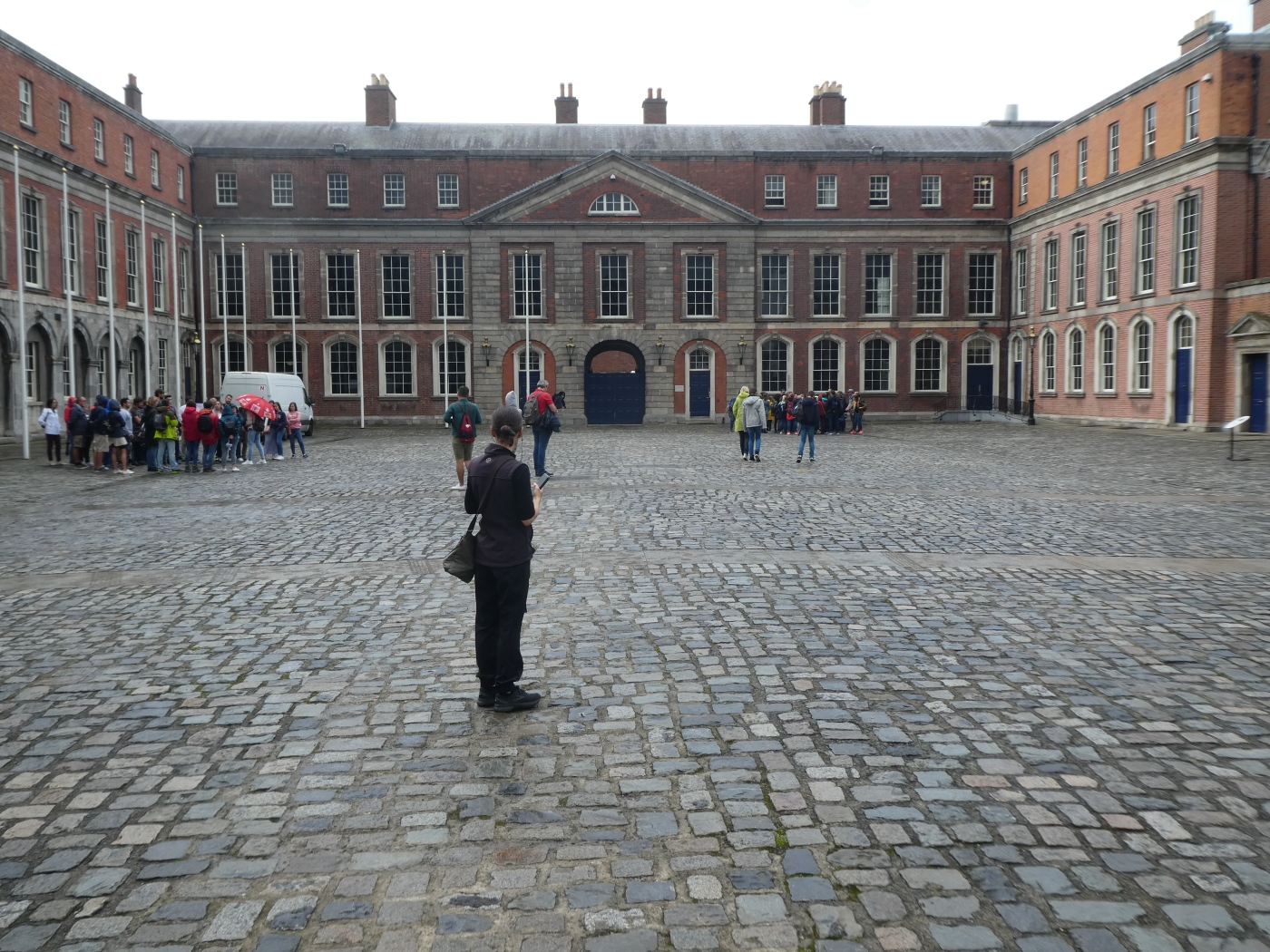 Well, Dublin is officially the noisiest place we have been thus far. Yes, I know it’s a city and yes, I know it’s a capital city, but still. We have been in a lot of cities and this is the eighth capital city we have been to this trip and none of the others are even a smidge on the overwhelming wall of noise that is Dublin. Dublin takes city noise to a whole new level of assault on the ears.  I don’t know if it’s that it’s small so the volume of traffic is condensed into a smaller area or if it’s the narrow streets that amplify the sound, but all I know is, it was a smorgasbord of noise and a new dish of din was continuously being served. I found myself unconsciously, reflexively, throwing my hands on my ears because the sound was so overwhelming. With the constant traffic noise, construction noise, the shouting of voices over the background noise, the screaming sirens and then, when a council van drove past towing a clattering trailer down the cobbles next to me, that was another dish of din to add to the buffet and the hands had a mind of their own and flung themselves to my ears. Could I have a special order of quiet please!?

We did a tour today, under our own steam. Using the Dublin Discovery Trails app, we could choose from a number of different tours, with various points of interest and commentary to tell us about what we were seeing. We roamed the streets and buildings, getting some information as we went and it was great to see things at our own pace, getting the background story to the areas we were roaming in and with earbuds or a phone clamped to my ear, I could just about hear the audio over the top of the Dublin cacophony going on around us. I don’t think we would have stood a chance on a regular walking tour and those poor tour guides must go through a truckload of Strepsils every month or have a hip flask of something to gargle to sooth their shout-weary throats!

So here, I will give you the rundown of some of the sights of Dublin, in the peace and quiet of print and pics!

First stop was City Hall. This is a very grand, Georgian building in the centre of the city and was built by the Guild of Merchants between 1769-1779. Originally the Royal Exchange, it was used by merchants before becoming the City Hall. Inside is a very elaborate rotunda, with pictures depicting scenes from Irish history, beginning with the Vikings.  City Hall saw fierce fighting during the 1916 Easter Rising and became the home of the Irish Provisional Government in the Civil War of 1922. 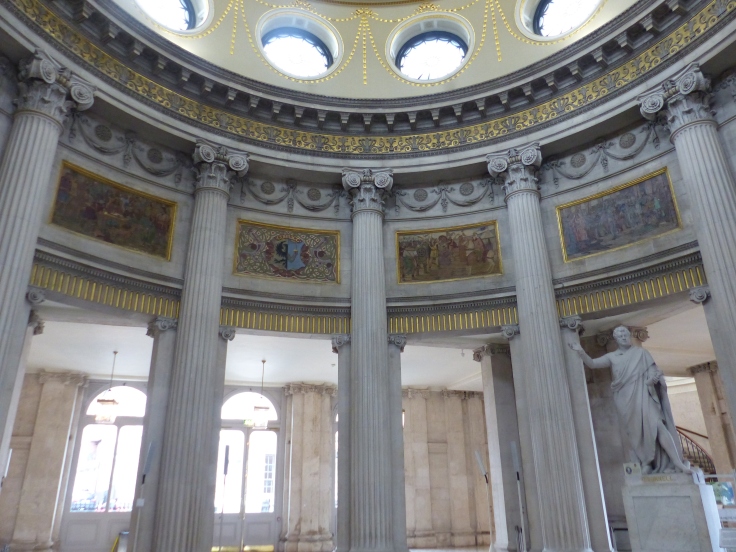 On to Dublin Castle, through the Gates of Fortitude and Justice, which were erected in 1750. The castle is thought to have once been a Gaelic fort, later a Viking fortress. The State Apartments date from 1680-1830 and were once the ceremonial quarters for the deputies of the British Monarch and today they are the most important ceremonial rooms in Ireland. State functions are held there, as well as the inaugurations of each new Irish president and it’s where visiting heads of state are hosted. Fun fact…it is here that Dublin gets its name. ‘Dubb Linn’ is Gaelic for Black Pool and Dublin is named for the black pool that was once on the site of the castle gardens. So, Dublin is really just Blackpool! 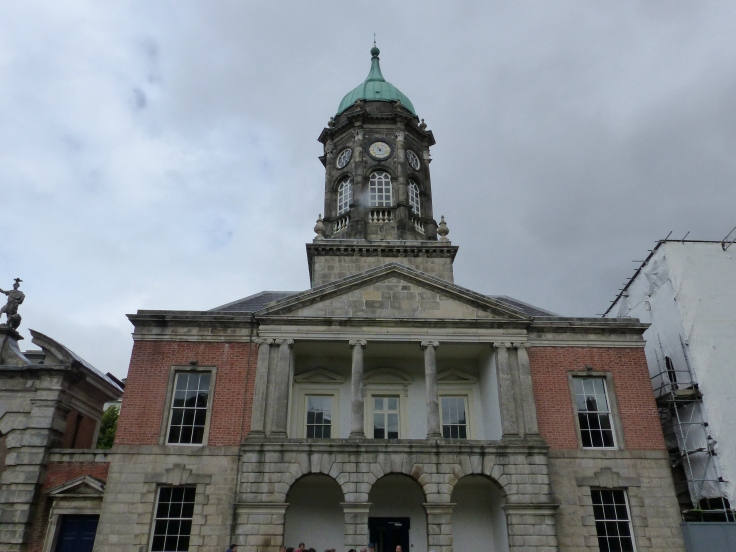 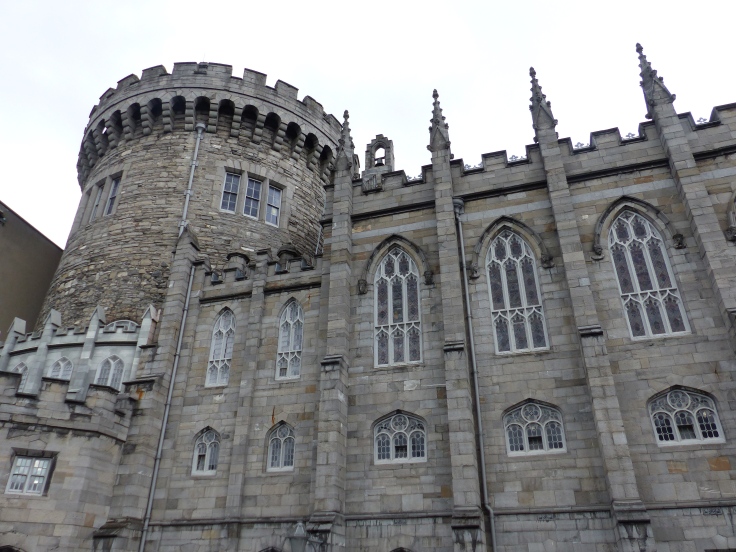 Leaving the castle, we crossed over Ship Street, which was the site of a daring escape from Dublin Castle in the winter of 1591-92. Three Irish prisoners escaped through the castle sewer and trekked over 50 kilometres across the freezing countryside, to Wicklow. One of them died of exposure soon after escaping but the other two made it.

Around the corner is St. Werburgh’s Church, a church that doesn’t look much like a church. It used to have a tower and steeple but after the rebellion of 1798, British administrators were worried the church might pose a security risk because its steeple overlooked the castle yard. They thought future rebels might take over the church and use the steeple as a sniping position to fire down onto British forces in the castle grounds, so they pulled the steeple down in 1810 and in 1836 the tower was removed too.

Next stop was Christ Church Cathedral and this is Dublin’s oldest working structure. It was founded in 1030. 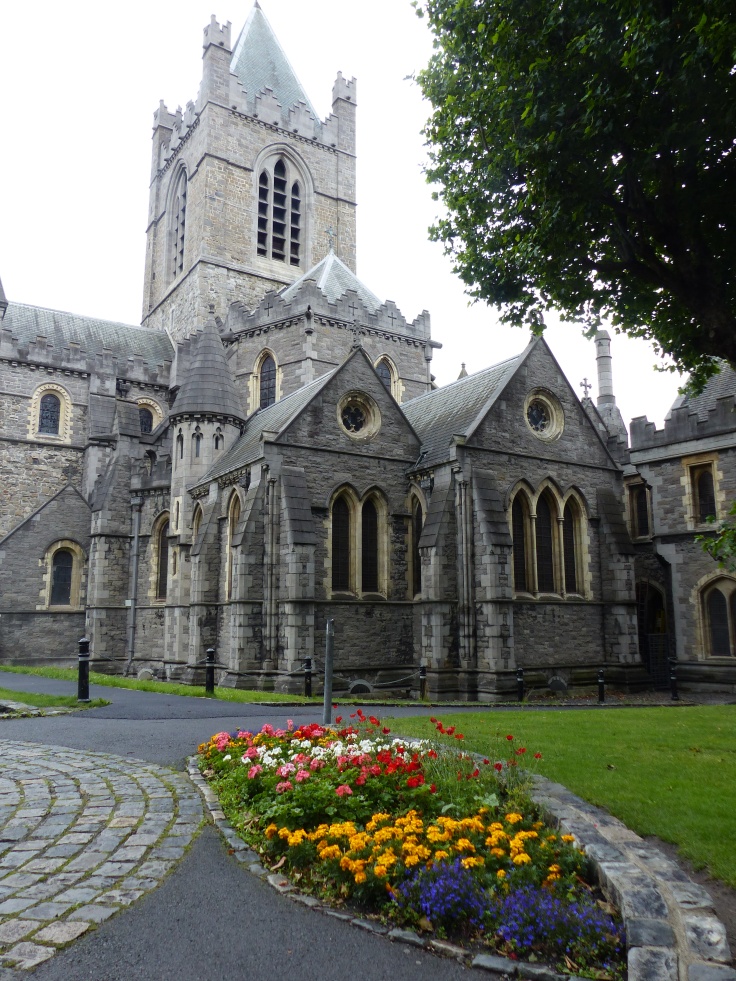 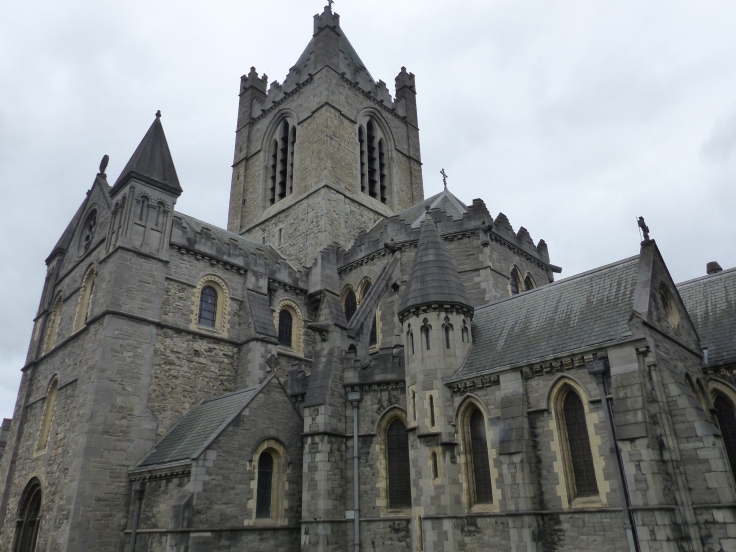 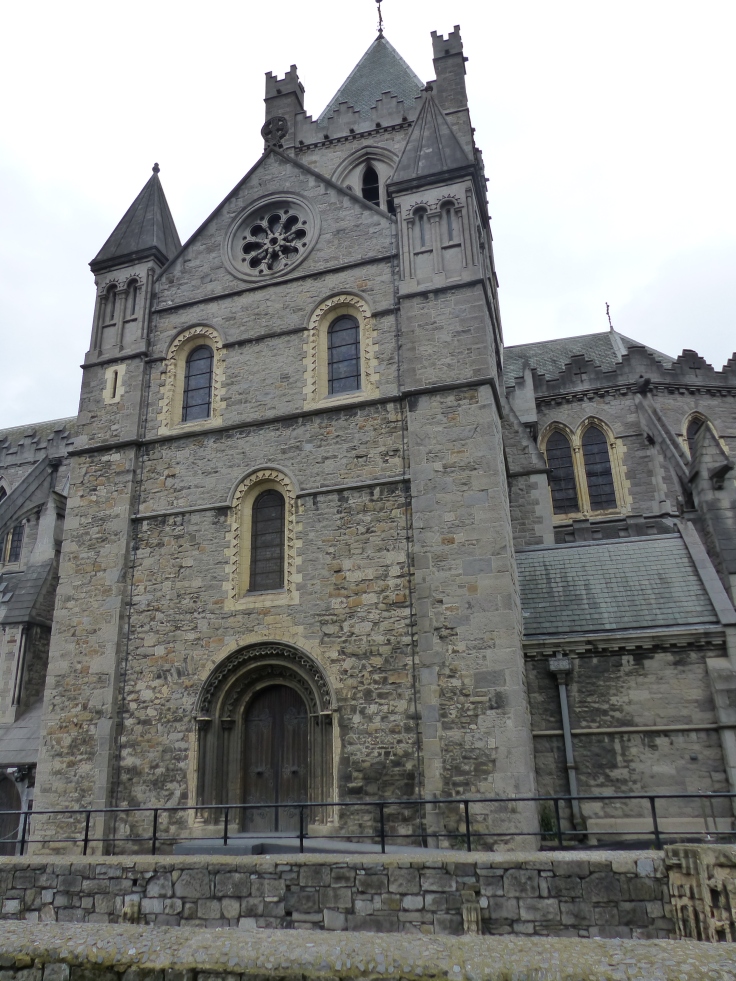 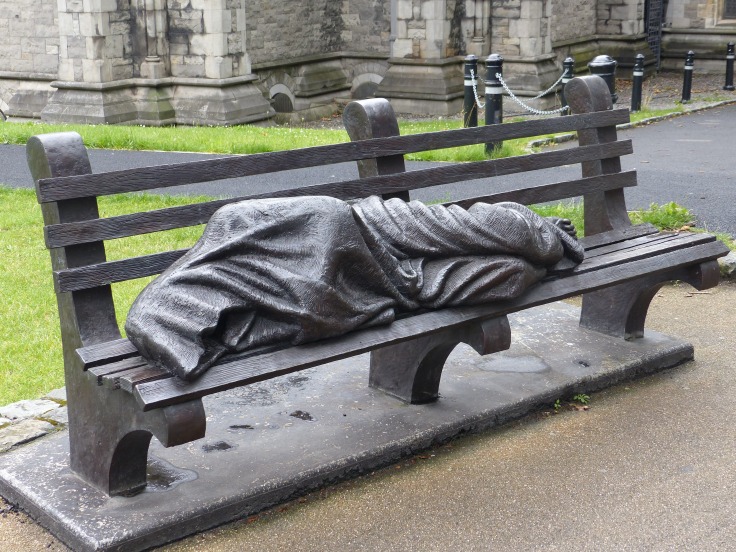 Just up the street is Tailor’s Hall, the oldest surviving guildhall in Dublin and was home to the ancient Tailor’s Guild from 1706 to 1841. At the time, in order to work as a tailor, a person had to be Protestant and had to get permission from the master of the guild.

From there we roamed along, down, up and around a multitude of streets, seeing pieces of Dublin’s medieval history, before finding our way down to the Quay and then on to Trinity College. Trinity College is Dublin’s oldest university, dating from 1592 and has some very distinguished alumni, such as Oscar Wilde, Bram Stoker and former Irish president Mary Robinson. It was once very exclusive, in the true sense the word. Until 1873 Catholics were only allowed in under very specific circumstances and after 1873 the Catholic Archbishop forbade Catholics from going there, a rule that lasted until the 1970’s. Until 1904 students were exclusively fellas and women weren’t allowed admission, because of the views of the Provost of the college at the time. Wen he died, women were allowed to enrol and today sixty percent of students are women.  The college was also used as a barracks by the British army during the 1916 Easter Rising, with 4000 soldiers crammed into the quadrangles. 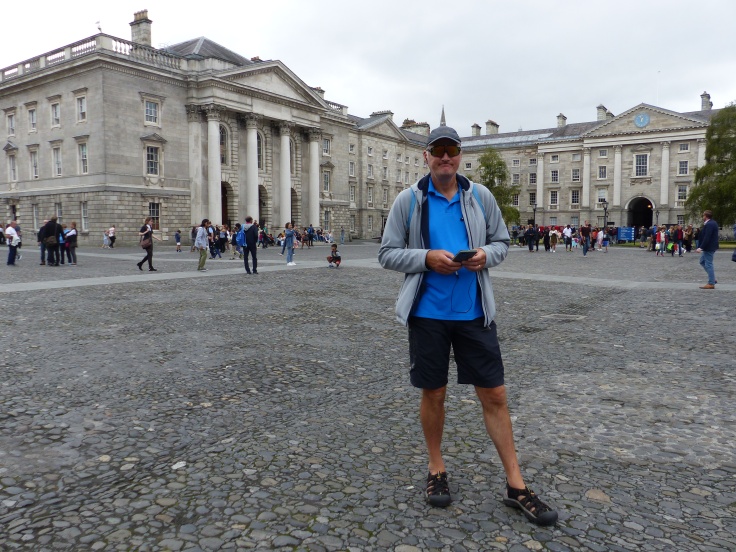 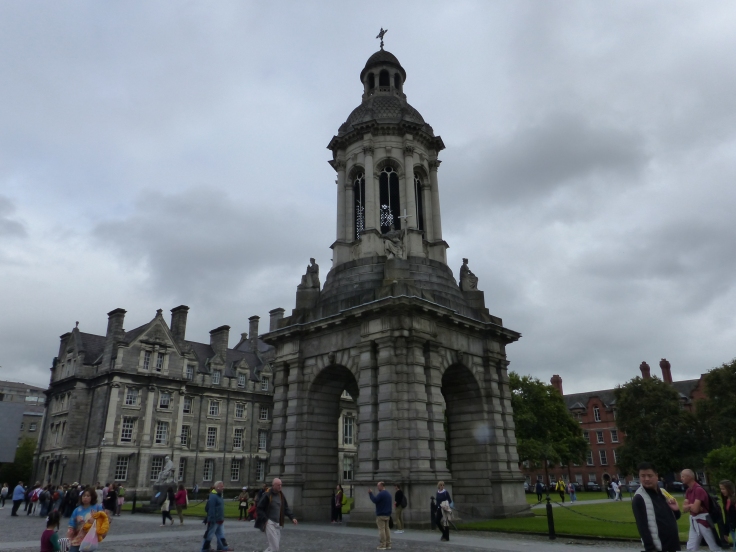 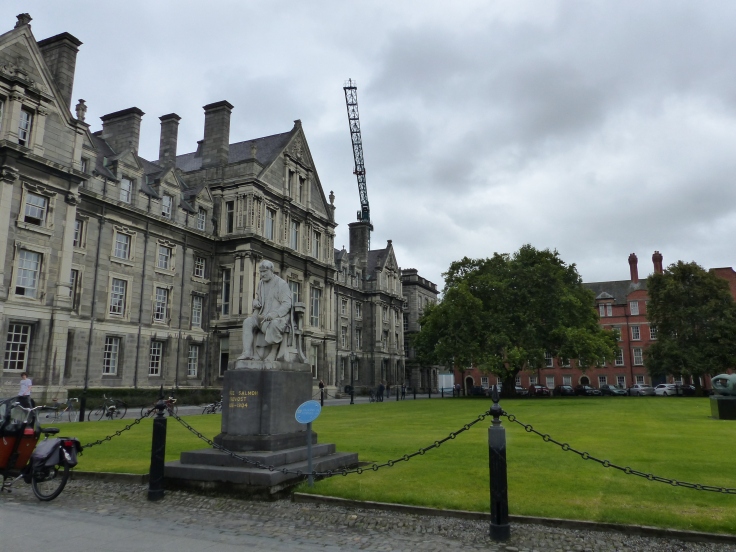 After touring the busy, noisy, crowded streets of central Dublin, we decided to head across the river to Dublin’s Northside. It was a little quieter in places, which was a welcome relief and we strolled past Customs House, Henrietta Street and King’s Inns before making our way back towards the centre. It rained on and off all day, so the umbrellas were doing their yo-yo impressions going up and down all day, but we did get to see quite a lot of the city and hear about some of its backstory. 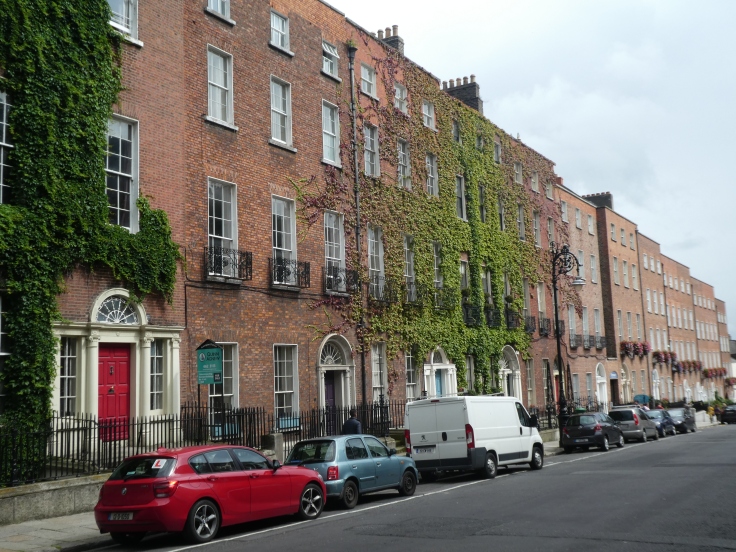 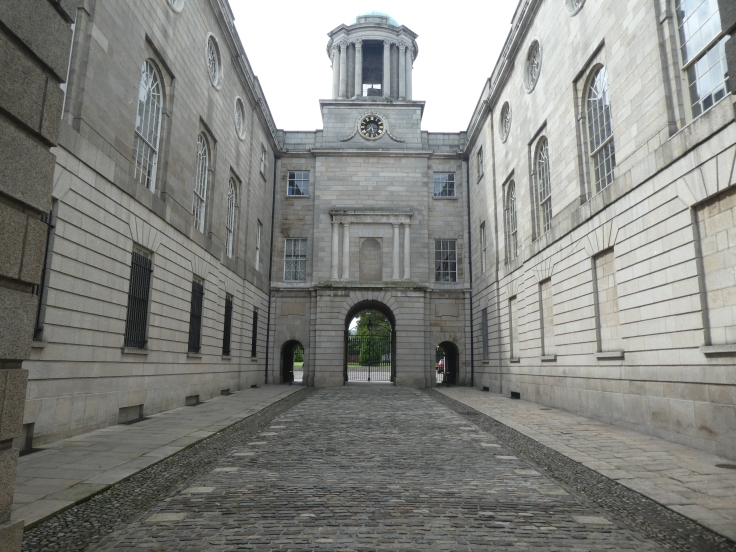 So that was day one in Dublin. There are certainly some interesting buildings and fascinating history, but I couldn’t say it’s a particularly easy city to be in. There are parts that would be nice, but are just so touristy as to be a turn off. Steve said he would have liked to sit in a square in Temple Bar and have a drink but in the end he said it was just so touristy that it didn’t appeal. It was the noise that really got to me though, to the point of being overwhelming. I know some of that is just me, because travelling by bike we do have a quiet mode of transport, usually travelling through quiet places, so I tend to be a bit hypersensitive when faced with the noise of a city, but I haven’t felt it to this extent in any other place we’ve been. Dublin was just an absolute cacophony and trauma to the ears! Still, we’re here, we get to experience another place and we have another day to explore, before we hit the road. A roaming we shall go again, lucky to be here and seeing the sights, and if my special order request can’t be delivered, I will just have to deal with the cloak of sound, shrug it off, or…just end the day with a modern equivalent of “a cup of tea, a Bex and a good lie down!”

Weather fun fact as announced by Steve, the team weather obsessive: we have been on the road for 122 days and it has rained on 53 of those days! Almost a 50% strike rate with rain, “and I was being generous,” added the armchair meteorologist of his calculations. Sigh, I guess that’s why we have felt a bit soggy and confined to solid walls rather than the Nylon Palace. Maybe things will pick up from here??!! 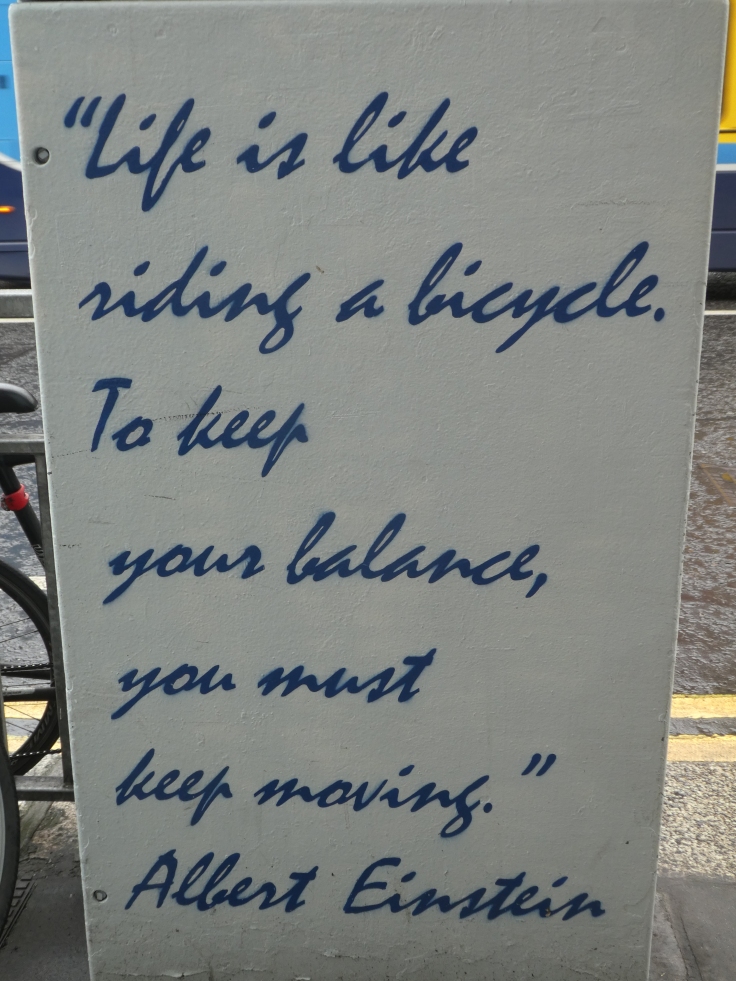