We rode out of Portadown under clear skies and sunshine, but with a definite bite in the air. It was chilly and a breeze was blowing, but we were soon on another brilliant path. We followed the Newry Canal Way, a fantastic traffic free, sealed path that connects Portadown to Newry, the town on the border of Northern Ireland. The path was another great place to ride, with the canal beside us, passing farmland, over bridges, under bridges, past locks and greeting other cyclists and walkers along the way.

As I pedalled along, a cyclist came up behind me and asked about the trip. As we rode side-by-side, I told him where we’d been and that we were heading back home to Tasmania in October.

“Tasmania! You’re from Tasmania! Lovely. I’m trying to think what I know of Tasmania. You have an author don’t you? Flanagan?”

“He’s written a few good books,” he added, then together, pedalling along, we began listing Richard Flanagan’s books and talking about them. How about that!

When we met up with Steve, we stopped to chat and the cyclist introduced himself as David and asked where we were headed. When we said we were making our way towards Dublin, he told us the ride to Dublin wasn’t very good. “Not very scenic and busy roads,” he told us, “the east coast isn’t much to look at, but if you want scenery, go to the west coast.”

Many people have told us the same thing and it’s where we want to head, around south and then up the west coast to see the rugged landscape of Ireland. We chatted for a while and he commented on our tyres and how good they are and that he has the same, all of which meant something to Steve but nothing to me, since I know nothing technical about our tyres other than they’re round and black. After chatting for a while, David rode off with a parting, “As they say, go west young man!”

We pedalled on and the sun was still shining spectacularly, although the wind was straight in our face, but not too bad. We had green hills in the distance and paddocks beside us, some of which had definitely seen more rain than they needed. 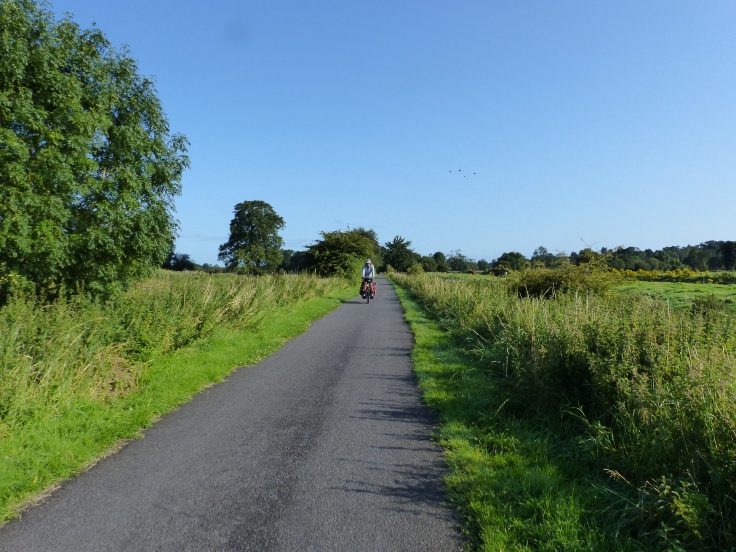 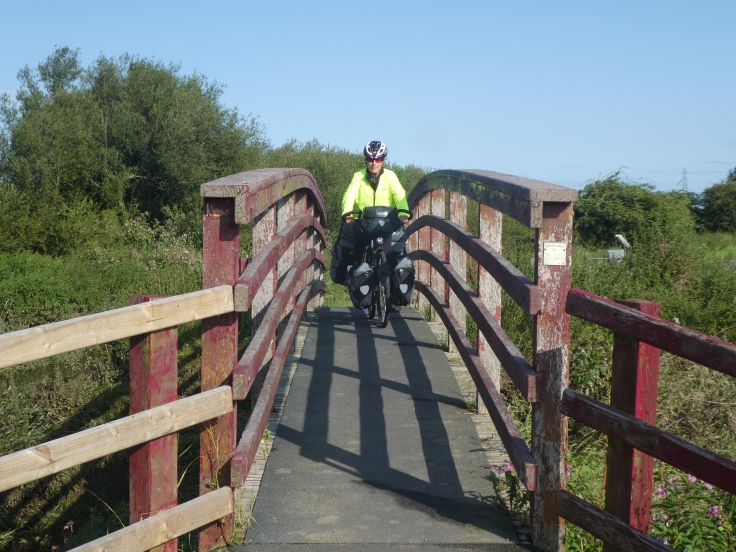 Then we arrived in Newry and this is where Stage 1 of our cunning plan began. This is how it’s taking shape…but first the preamble:

We are having trouble finding accommodation of any sort and the options are few and far apart. This has meant, as we try to work out where to ride, we are finding ourselves choosing a town to ride to, simply because it has somewhere for us to stay. Not because there’s anything there we want to see, or worth seeing, or roam worthy, simply practical reasons only. We don’t want to be limited in that way. We have also discovered from reading other people’s travel experiences and talking to other people who have travelled here, not just on bikes, that they too found accommodation options difficult to find. This is difficult on one level if travelling in a car but reaches a whole new level when on a bike and we can’t just drive to find somewhere.  We could either be stranded or riding very long distances or ridiculously short distances, just to fit in with where there might be a place to stay. So…none of that is ideal and we want to see as much of Ireland and the best of Ireland as we can, not just the bits that we can get to because they have a room or camp for us.

So…rather than taking three days to ride to Dublin, again just stopping at random places that might have accommodation, we decided to jump ahead to Dublin, have a look around for a couple of days and then hire a van. Local knowledge, including that from David today, has told us that the ride to Dublin isn’t much chop anyway. When David said that today, he wasn’t the first who mentioned that assessment of the ride to us, so we figured we weren’t missing anything by jumping ahead. We will hire a van for a couple of weeks, so we can throw the bikes in the back and drive to places where we can ride and see things and get around a bit more of the country, while always having a secure base to return to. We have read of some beautiful places to ride and many people have told us how beautiful the west coast is, so with four wheels, we can get to these places, regardless of weather, then we can park, get out the bikes and still get to ride in the spectacular scenery as much as we can. The bonus is, when we get back from a ride, we have the van to return to and even if it means we have to drive a distance to find somewhere to stay, it doesn’t matter, we can do that, which we couldn’t on the bikes, we’d be stuck or limited to where we could go. So, our cunning plan is to use the van to take us to places we want to see, have it there as a base to return to and a means of getting distances to find camp or lodgings, while being able to take the bikes along with us and still enjoy cycling in Ireland. So that, my friends, is our plan!

Stage 1 got underway at Newry, where we jumped ahead on the train to Dublin. This was another interesting train experience. On the Irish trains, the bikes went in a separate luggage carriage, behind the front engine carriage where the driver is. So, when the train pulled in, we had to haul the bikes up into that carriage, around some other bikes and big suitcases, get them in place there, then jump down and power-walk back up the platform, to get into a passenger carriage for us. When we put our bikes in, there were other bikes in there and Steve had to lean his up against a few others, so when we got in the passenger carriage, we passed a group of cyclists sitting together. Steve asked where they were getting off and they said the next stop, so Steve explained that his bike was now blocking them in slightly, so he’d jump off with them and help get their bikes off. When we arrived at that stop, Steve leapt off and I waited…and waited…and waited…and then the train began to move off…no Steve…I looked out the window and didn’t see him on the platform…I waited…no Steve…no Steve…I figured if he hadn’t got back in time he would have called, but still…waiting…waiting…looking behind me down the aisle…no Steve. Finally, I sent him a message and his reply told me he was trapped in an aisle, but at least he’d made it back on the train. Phew!

When we arrived in Dublin, we walked the bikes off the platform and then had to take an elevator down to street level. Steve went first, having to rear his bike up on its back wheel to fit it in the small lift. Then down I went and as I came out of the elevator at the bottom, it was to hear Steve in conversation with two little ladies.

“Could you come up in the elevator with us?” they were asking him, “we don’t trust them at all.”

“Sure,” said Steve. I walked past them, to wait with the bikes and I saw Steve get into the elevator with these two little ladies with their small suitcases and one balancing on a walker.

“You’re a very tall man,” said one, looking up at their elevator chaperone, “are you seven feet tall?”

So Steve the giant rode the elevator up, to escort these two little ladies in the lift they didn’t trust, while I waited down below. They obviously thought big Steve the stranger was more trustworthy than the elevator, for approaching him to help them! Steve soon came walking back down the steps with a smile on his face, having safely deposited the ladies at the top and that was another lovely, memorable encounter with some locals!

As we rode out into the streets of Dublin, the good thing was there were bike lanes and bike traffic lights, the bad thing was, sometimes the bike lane was in the bus lane. The traffic was thick and we pedalled furiously in amongst it all, hurtling across intersections and changing lanes with cars all around. Then…we both became a bus sandwich. A bus pulled in, so we were riding past it and then another bus passed by us, squishing us between the two buses! Then the bus that had pulled in, indicated that it was pulling out, while we were still the meat in the sandwich so to speak! I put the foot to the pedal and we powered on, to get out of that bus baguette because I didn’t know if the bus pulling out had seen us and then we would’ve been completely squished! We escaped the bus sandwich, without becoming a dollop of mustard and found a park to sit and catch our breath, before heading to our pitstop.

After settling in, we set out for a short roam on the way to gather supplies, at precisely the same moment that it…rained! It wasn’t nice, delicate, pitter-patter rain either, it was good, fair dinkum splonking rain! At least it held off until we were off the bikes and we finished our ride in sunshine. We put up the brollies and walked around the very crowded and very noisy streets of Dublin, gathered supplies and then headed back to get dry again. 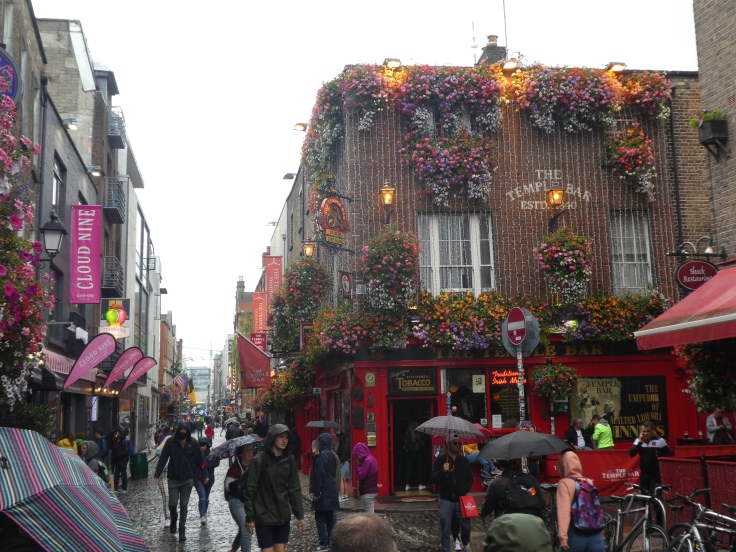 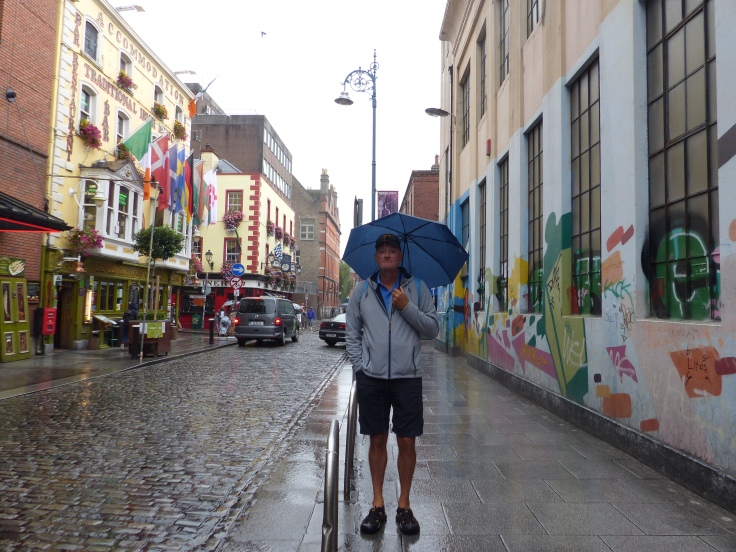 So…here we are in Dublin, where we shall roam for a couple of days before implementing Stage 2 of our cunning plan and venture forth into the south and west of Ireland on a four-wheel / two-wheel combo, to see what we can see and see where we can ride and see what’s there to be discovered. But first…Dublin discoveries await! On we roam!

Time in the saddle: 2 hours 35 minutes 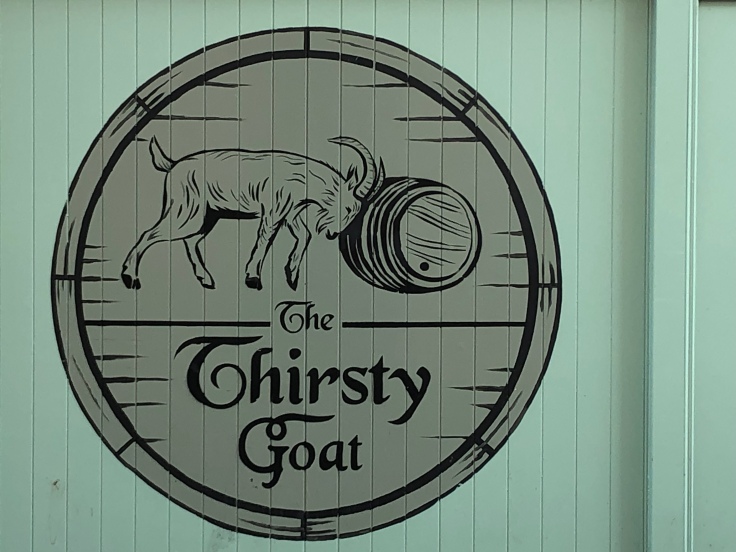