I think I shall have to stand somewhat corrected. We still aren’t seeing any of those wind turbines that dominated the landscape in Germany and Denmark, but as for the traditional windmills we haven’t really been seeing…well…they are indeed here and we sure were seeing them today.

We pedalled out of Delft under sunny skies, on a warm morning, through the streets already busy with bike traffic and through the lovely cobbled square once again. We weaved around corners, followed the bike lane and, just to be on the safe side, gave way to anyone and everyone, coming from any direction around us.

The path took us beside a canal and we soon joined the other cyclists waiting on the bike bridge. This was a rotating bridge, that had turned parallel to the canal to let a barge through and we were waiting for it to swing back around, to meet up with the path and create a bridge once again.  Once it was resting in place again, we had our bridge and we were all off, wheeling over the water and on to our onward journey.

We were through neighbourhoods for the beginning of the ride, along cobbled streets, then paved paths, riding past houses and quiet, leafy neighbourhoods, then beside some farmland.

“Windmill!” I called to Steve up front.

There on our right was another traditional windmill with its wings standing quiet and still.

Past more fields and beside roads, then into the town of Leiden.

“Windmill!” I called as we pedalled into town.

Gee, the tally was building up today!

Leiden was another lovely town, with canals, classically Dutch houses lining the water, bridges and cobbled streets. It’s also where Rembrandt was born and after leaving Delft where Vermeer was born, it seems this part of the country has something creative in its water to put two such masters within a stone’s throw of each other. 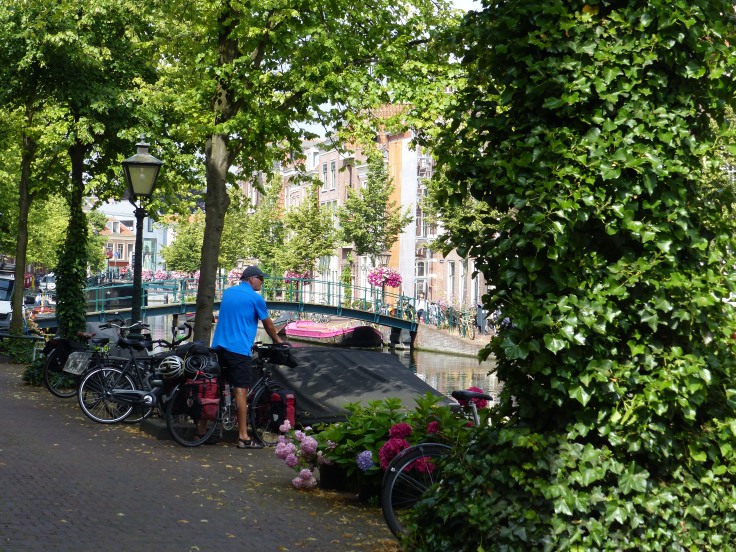 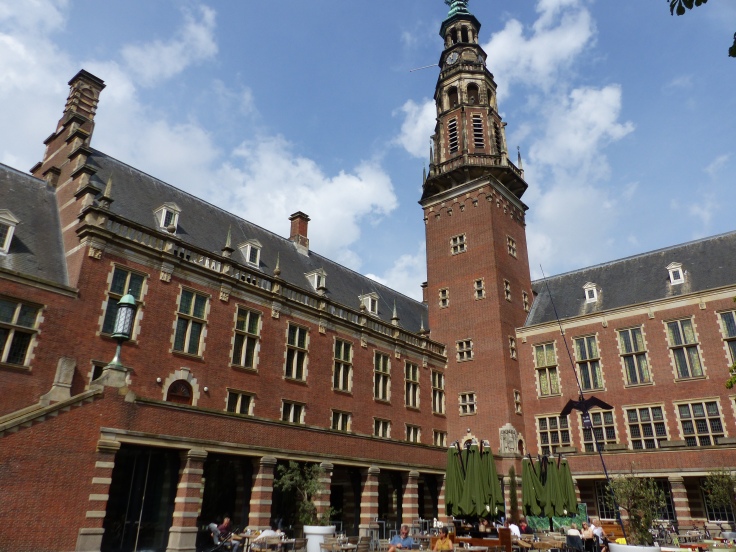 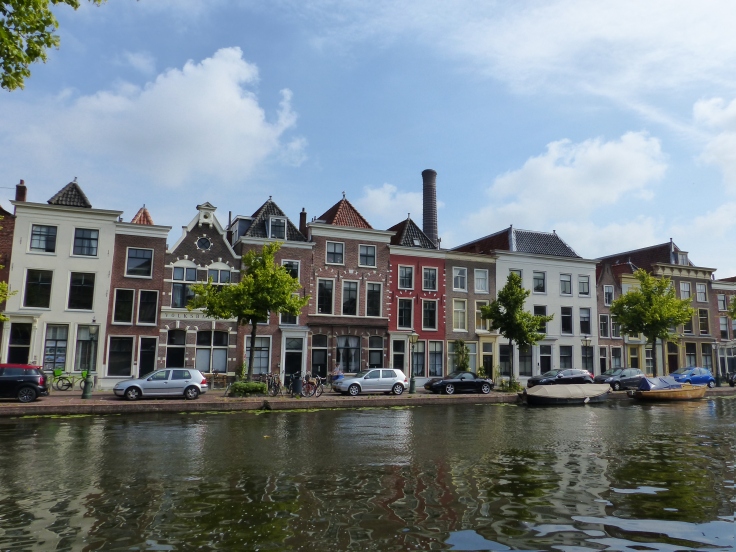 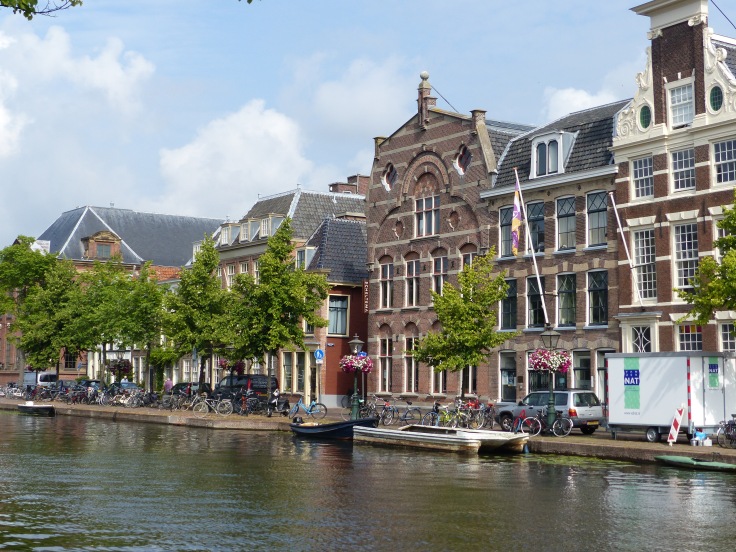 We found a spot beside the canal, in a small square under a tree and had elevenses watching the activity going on around us.

As we were walking the bikes out through the streets, a man stopped us and asked where we were from. His eyes widened when we told him. “Australia!!” he exclaimed with surprise, “with the bikes!?” He told us he was about to go to Vienna and spend three weeks riding back, but he couldn’t believe we were going to be on the road for six months. “Good journey,” he said in parting. We really do get some shocked responses when we tell people we’re from Australia. I guess there’s so much cycle touring between European countries and the people there, that Australia just sounds so far away and such a big thing to come all the way over here. Which, I guess in a way it is.

Along more roads, past fields and canals.

“Windmill!” came the call again. We could be going for a record here! 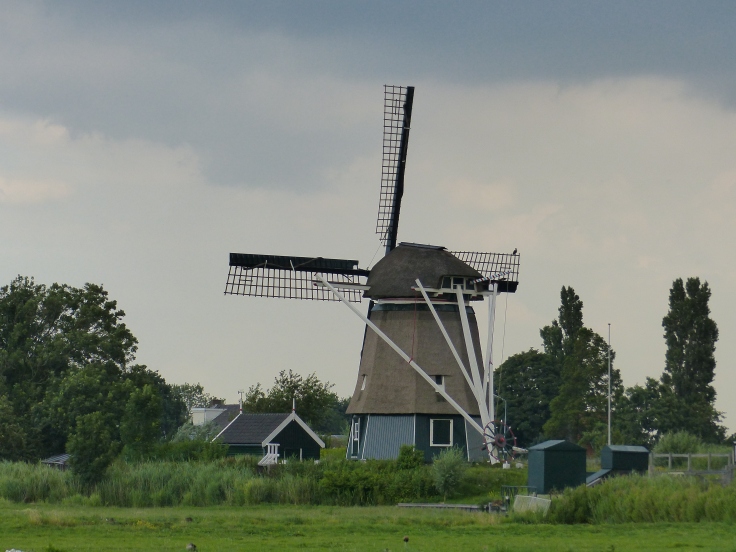 We rode along a path beside a small park with a bench and stopped to soak up a bit of sun while downing a drink on the still warm day. We were just about to put foot to pedal again, when a young woman rode up on a road bike and spoke to us. We didn’t understand, so she then said, “I have a question.” She was having trouble with her bike seat, which kept tipping backwards when she sat on it. “I saw you and thought you will have a tool to help me because you look like professionals.” I inwardly laughed hysterically at that because of all the things we could be called, ‘professionals’ isn’t one of them! Steve reached for the tool kit and fixed her seat for her and she asked where we were from and how long we were riding for. I told her where we’d been and where we were heading. “What has been your favourite country to ride in?” she asked. I pointed to the ground. “Here?” she said, “that’s such a nice compliment. That’s so nice to hear.” She thanked us again, wished us well and pedalled off. “You might pass me,” she added, “I’m pretty slow.

“No chance of that!” I laughed.

On we went and in no time at all…”Windmill!” I called yet again. We were like sailors shouting “land ahoy” as we kept spotting their distinctive shape in the distance. 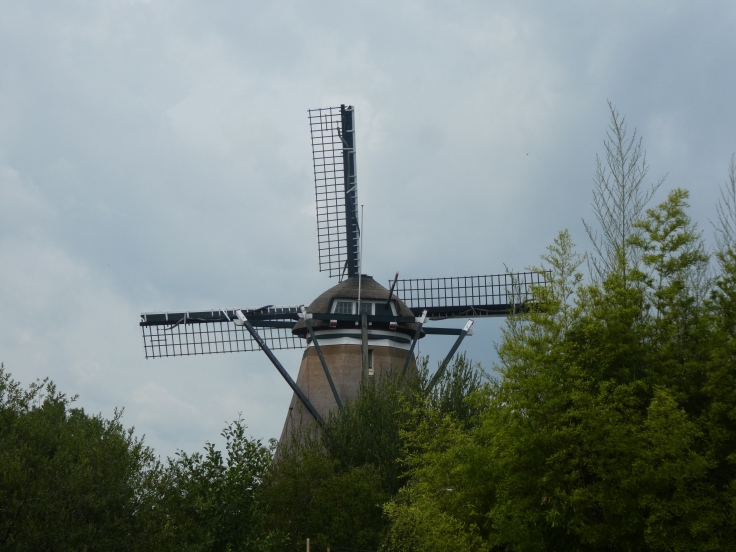 As we pedalled on, the sun disappeared and the sky became that oh so familiar grey. The wind picked up and then a big, dark cloud loomed above. It was sitting just behind us and seemed to have us in its sights, creeping up. The race was on. If this was going to dump on us, we were determined to outrun it.

We picked up the pace, considered for the briefest second stopping in a park for lunch, but then thought better of it and decided not to give that cloud any opportunity to gain on us, so we pedalled on. “Windmill!” I shouted. Honestly, after me saying we don’t see any, it’s a windmill bonanza today, they were coming thick and fast!

Past some fields, beside a canal, with the sky still grey and seeming to descend upon us.

“Windmill!” we shouted again, both pointing in the distance. The game of who could spot them first was well and truly on. 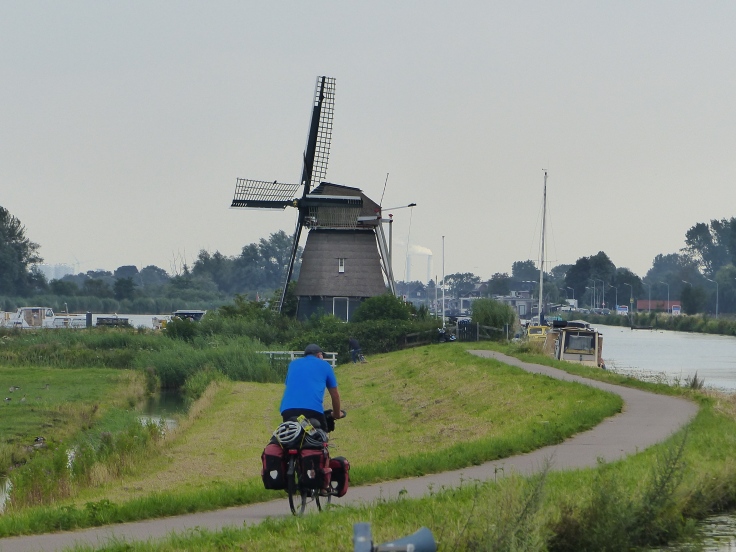 We reached the outskirts of Haarlem and had a great path in, all traffic free, beside water, fields and trees. We reached our pitstop, which is about 5km from the centre. We’ve booked an apartment for a few days before we catch the ferry to England and will base ourselves here so we can ride into Amsterdam for a look around and then hopefully do some day trips on the bikes as well. Haarlem itself is supposed to be lovely, so we will roam its streets as well. We have been on the road for ninety six days and this will be the longest stop over we’ve had anywhere. We’re looking forward to the chance to see some places with a base to return to, rather than packing up and moving on. It will give us a chance to really explore the area and then get ourselves ready to leave mainland Europe and head for the U.K.

So there we have it, just a short post today because the ride itself was fairly straight and uneventful. Mostly beside roads, with a stop in another lovely town and then a race to beat the weather and all of a sudden, lots and lots of windmills! Now, that’s Holland, I thought to myself. It might not be tulip season, but we did have canals and we did have those gorgeous Dutch houses and we did have the classic Dutch icon in all those windmills. The next few days will be some time on the bikes and some time on the feet to wheel and roam and explore our surroundings. Not long left in Nellie, but what time remains, we will milk for all its worth to get every last magical moment out of this amazing place before we leave. Riders and roamers are ready to go!

Time in the saddle: 3 hours 53 minutes

Number of windmills spotted: 7 Yep…seven! (One we couldn’t get in a photo)

Weather: sunny, then grey, then windy, dodged the rain though, 22C