I think it’s been established that I am prone, at times, to an overactive imagination. I create stories in my head for things I see and whether it be forests or the possible scenarios surrounding an otherwise benign pair of gumboots sitting beside a lake, I have a tendency to invent all kinds of events in my head around innocuous locations or scenes. Today I was imagining in a different way. Not a fun way. I was trying to get a sense of life behind a wall.

Today was a roaming day and we set off into the tail end of a storm. The rain had started over breakfast, with a roll of thunder and as we walked out of the apartment, the streets were wet, but thankfully the sky was now dry. It was then that I saw another example of the laid back, casual approach to life in this great city. We had stopped at an intersection and a cyclist was waiting for the light to change. The cyclist was a young woman who had clearly taken the weather into account. It had rained, it was still wet, but it was warm and muggy, so there she was, on her bike, in her coat, but wearing shorts and a pair of gumboots. It was as if she had thought, ‘It’s warm, I’ll wear shorts, but it’s wet, so I’ll whack on a pair of gumboots too.’ I thought it was brilliant. You wouldn’t see that in Sydney! 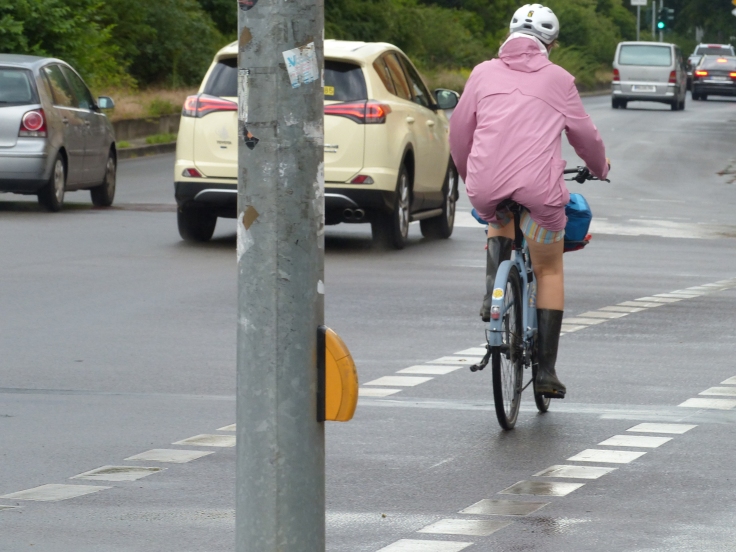 Our first stop was the Berlin Wall Memorial and we spent a lot of time there. I found it really confronting and it was another place we have visited that gave the history, the images and the events a reality. We saw where the Wall had been, we saw sections of the Wall as it had stood and I found it so hard to wrap my head around that period of history and how that structure could have remained for so long.  Because the wall was already there when we were born, we grew up with news and events of East and West Germany and a divided Berlin, with an acceptance of that being just how Germany was. Then, when the Wall came down, it was of course a major event that we saw on the news and read about. I don’t think I’d actually really given enough thought though, to what this barricade of concrete actually did and represented. Thinking about what Germany is like today, unified, peaceful, progressive and then to think of it so recently being a place where its citizens were living like this and being killed for simply trying to walk to a different part of the city, is staggering. It really brought it home for me, what that period of history was like, the events surrounding it and life in a divided city and country. Even the fact that in information, the Wall is given a capital W. It’s not ‘the wall’. “It’s ‘the Wall’. It’s as if it had an identity of its own. In a way I guess it did. 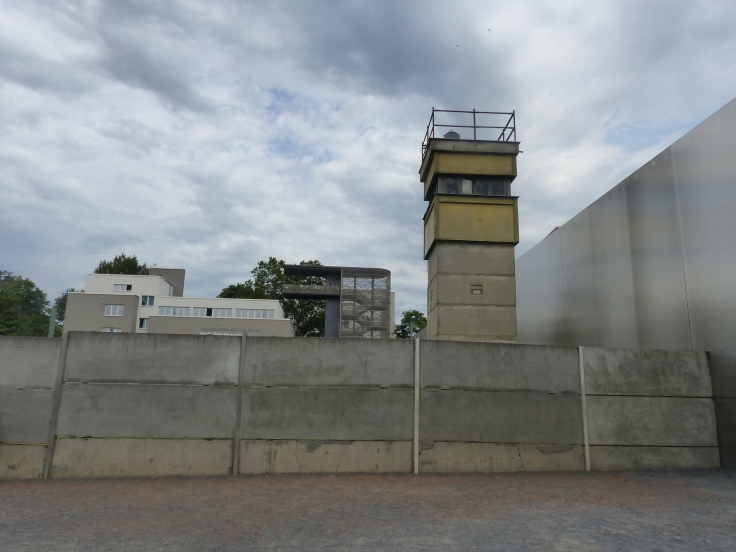 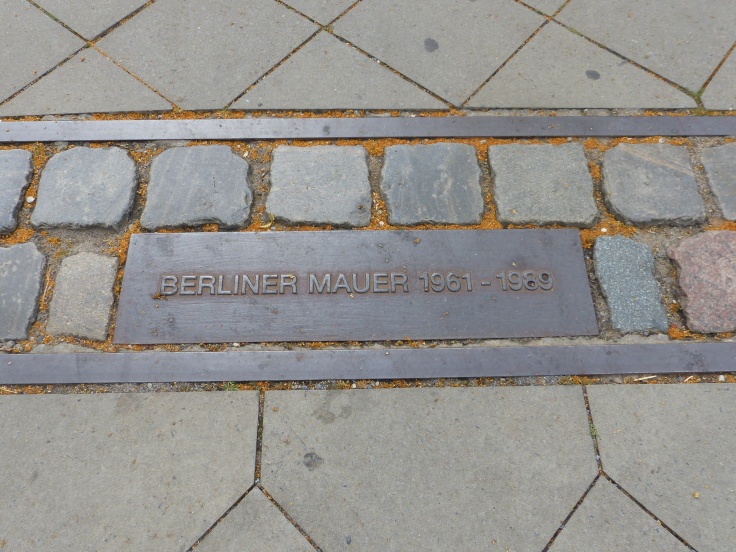 We walked to where a section of wall had been left standing and it struck me that we instinctively did what the citizens would’ve done. We went straight up to where the concrete had been chipped away and tried to peek through to the other side. I imagined what that would have been like, to have that wall of concrete in front of me, every day, for nearly thirty years, wondering what was going on in the lives of those on the other side.

We could walk up a tower and look down on an area as it would have been patrolled and then saw artefacts from the time such as the metal spikes that were laid in the ground, to prevent escapees from jumping down. Berliners called these spikes “Stalin’s lawn” and they were only removed in the mid-1980’s.

I found our time at this place very confronting. I found myself just standing, looking, thinking, imagining, what it would have been like to live under that system.  Knowing, of course, that so many people in Berlin today lived like that. This is recent history. The events have been lived and  the legacy is still being lived. It was another incredible learning experience and an opportunity to live history in a small way. It was a really powerful experience.

We continued to roam, just taking in the city, feeling its atmosphere and character. We strolled past the Reichstag again, along Under den Linden, a main old thoroughfare in the East, with its wide boulevard. Then we strolled past Checkpoint Charlie, a famous crossing point between East and West Berlin. This was the only place we’d been that was really crowded with tourists, so we didn’t linger.

We hopped on a train to see some of the outer edges of the city and saw KaDeWe. This is an iconic department store in Berlin. It opened in 1907 and has such a story of its own, surviving turmoil and challenges. It was originally owned by a Jewish entrepreneur and was a symbol of luxury because of the goods and products it sold. It survived the Great Depression and then in 1933 was taken over by the Nazis, but the store survived. In 1943 an American plane crashed into the building causing devastating damage, but it was rebuilt after WWII. It reopened in 1950 and when the Wall went up, it stood as a symbol of everything the West represented, that the East did not have. It continued on during the separation of the city, when other department stores were being demolished by the GDR authorities. Now, here it is, still standing today. The area around KaDeWe is now considered “downtown Berlin” and the centre of the “West”. What a striking contrast to the old, traditional style buildings of the East. This was a busy, loud strip of stores and brands and garish signage, whereas the main thoroughfare through the East, the Under den Linden, was historic and grand.

We continued to roam and hop on and off trains to get around until it was time to head back to the apartment. Then we spent a wonderful night with Lisa and her two sons Ivan and Leon, eating plates of felafel on the grass in a park, then strolling to a biergarten to sit in deckchairs and talk and talk late into the night again, on a balmy evening in Berlin. A top end to a top day.

It was a wonderful roaming day. So much to learn, think about and see. It was  day for the imagination, but in a way that helped to bring the events of history out of the pages and off the screen and into life. A powerful day of learning that was both moving and confronting. Berlin continues to educate us, surprise us and delight us in equal measure. Another day to explore tomorrow. to see what this amazing city will deliver and what more it can offer. We’re ready. On we roam.

Weather: a little rain, cooler, then sunny, a nice comfortable 26C, thank you very much.

4 thoughts on “Imagining In A Different Way”