Every now and again you have that experience where you round a corner and see something that just takes your breath away and is simply…wow! I had one of those today.

We set off from Kreuzlingen, back into Germany to Konstanz, introduced ourselves to the Rhein and became its travelling buddy as we took off beside it for day one of our Rhein River cycling adventure. Plus…the sun was out again! Oh, the fantabulous superbness of it!

Well, I’d have to say the start of the Rhein cycle path was a little uninspiring. We weren’t by the river much and we had busy roads and that dastardly train line beside us. It was traffic-free which was great, but it was noisy and not too scenic. Listen to me! What expectations I have because I’ve been spoiled by some nice scenery in other places and now it seems I demand such scenery at every turn. What a cycling diva I have become! Still, it was a little less than scenic all the same!

We were eventually able to make our way down to the river, saw a table right at its edge and stopped for elevenses in Steckborn.

After elevenses, the view picked up considerably. We could see the river, perhaps slightly assisted by the steep little hill we puffed up, but at least we could look down at the twinkling water in the sunshine and cast our eyes across its shores to the banks of Germany on the other side. We were riding the Swiss side of the river and just over there, across the water, was our neighbour Germany.

We pedalled on, through some little towns with beautiful houses and buildings with their exposed timber style. Others were just pretty or quaint and I cast my eyes this way and that looking at those lovely buildings. 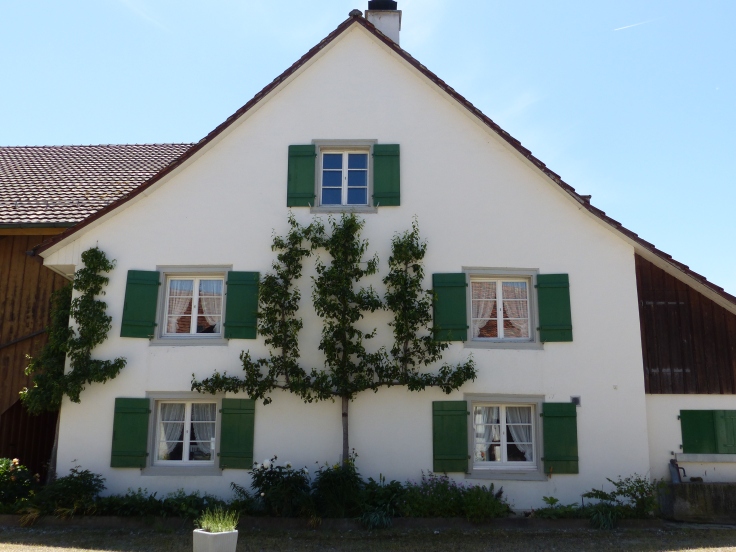 The path took us right and over a bridge and we saw the outer edge of the town of Stein am Rhein. Once over the bridge, we walked the bikes into the town, along its cobbles and into the main street. WOW! I mean..WOWZERS! That was the first thing that came into my head. This little town is UN-BEE-LEE-VABLE! Not only is it pretty and historic, but… those buildings! All down the main square and the cobbled street was building after building with a frontage covered in frescos. It was simply, well…hard to describe really, but…I guess I’d just have to say…stunning! Breathtaking even. Stein am Rhein is one of the best preserved medieval towns in Switzerland and it was like nothing I’d seen before. The cobbled, historic feel of the town was lovely in itself, but those buildings…I just stopped and stared and then walked the length of the street, just amazed by them. It was a very special little place. 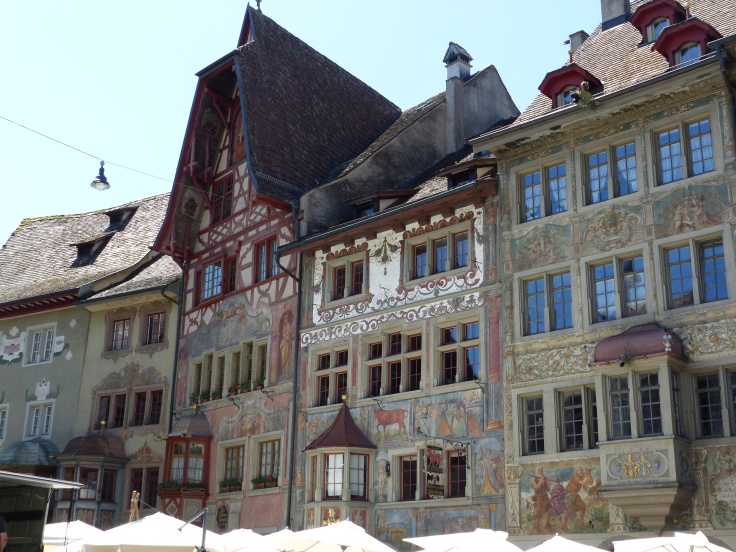 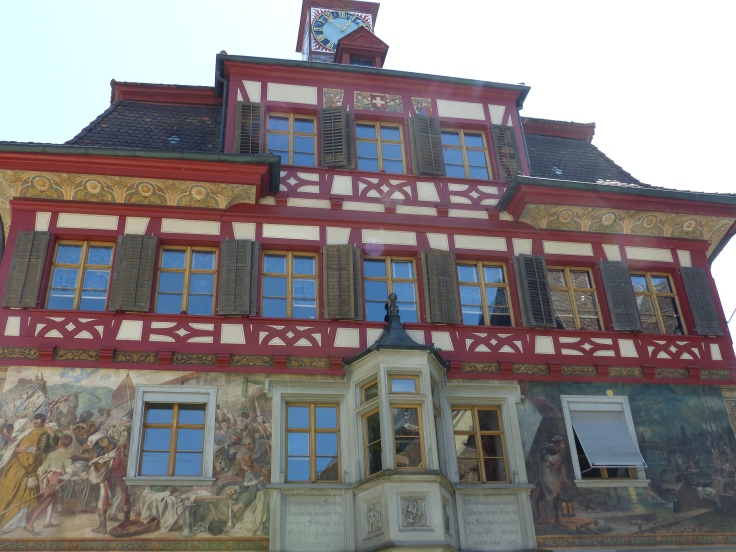 After spending some time awe struck by Stein am Rhein, we pedalled on, beside roads, through countryside and through forest. We had some ascents to deal with too. Some were gradual, some were short and steep, so I’d have to say, the story that river routes are gentle and flat is just a complete myth wrapped up in a furphy! We had to use low gear at times today and some of the hills were on gravel, which just makes it extra huffing and puffing and all together a bit ego deflating. The path was busy too. Forget about the German Autobahn, we had the Swiss Cyclebahn today. There were hundreds of people on the same route as us and none of them were carrying the size of load we were, so they were fast! We would be sweating and huffing and doing a very slow crawl up a hill, all red faced and looking a bit of a sight and then we’d have a fresh faced, cruising, fellow cyclist breeze past us, without a drop of sweat or flush of pink to their features, easy as you like, whizzing past our elbow. We just huffed on, a tad deflated.

We rode through Gallingan, which is in Germany and saw the covered bridge that connects the two countries. We could look across at Dissenhofen in Switzerland and it was another postcard scene of a town on the river.

We neared our destination for the day and rode alongside the river again. The sight, looking up the river towards Schaffhausen, was very speccy.

We crossed the bridge and  backtracked a bit to our pitstop and we’re back in Switzerland again. It seems that all those hundreds of cyclists we saw on the path today, have all had the same idea as us. When we arrived, there was us and three tents. Now, it is a regular tent suburb by the river and the Nylon Palace is in amongst an entire neighbourhood of nylon. I’m hoping everyone is a quiet sleeper, because if there’s any snoring to be done, we are a wall-to-wall tent town and the snorers will be rattling the walls of their neighbours, of which we are one. Although, I guess if we unintentionally snuffle, snort and snonk in our sleep, we’ll be those neighbours that everyone else wishes they didn’t have!

So we have completed one day of cycling the Rhein. It was a bit of a mixed bag today..we had some flat traffic free paths, we had the river beside us and then not, we had farmland and forests and roads and rail lines and we had some some lovely little towns and one very spectacular town and hills and water and views across to Germany, all to feast our eyes upon. And the sun continued to shine. [Insert operatic aria here in full joyous tribute to that blazing ball in the sky!] All up, a pretty ripper day. On we go tomorrow, with a little Creedence Clearwater as our theme song, with a little creative license…

Time in the saddle: 3 hours 33 minutes

Number of rail line barriers in our path: only 2 today 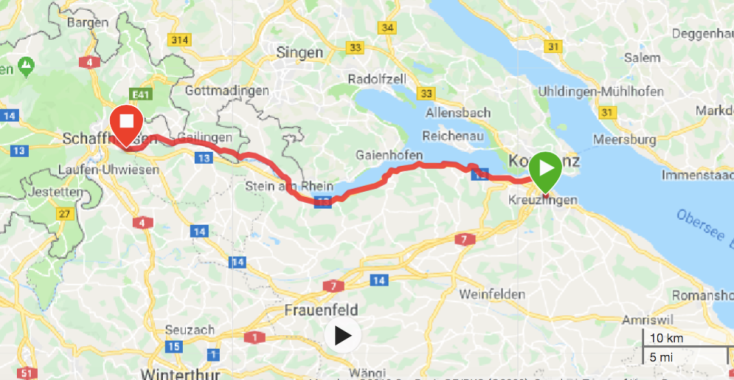