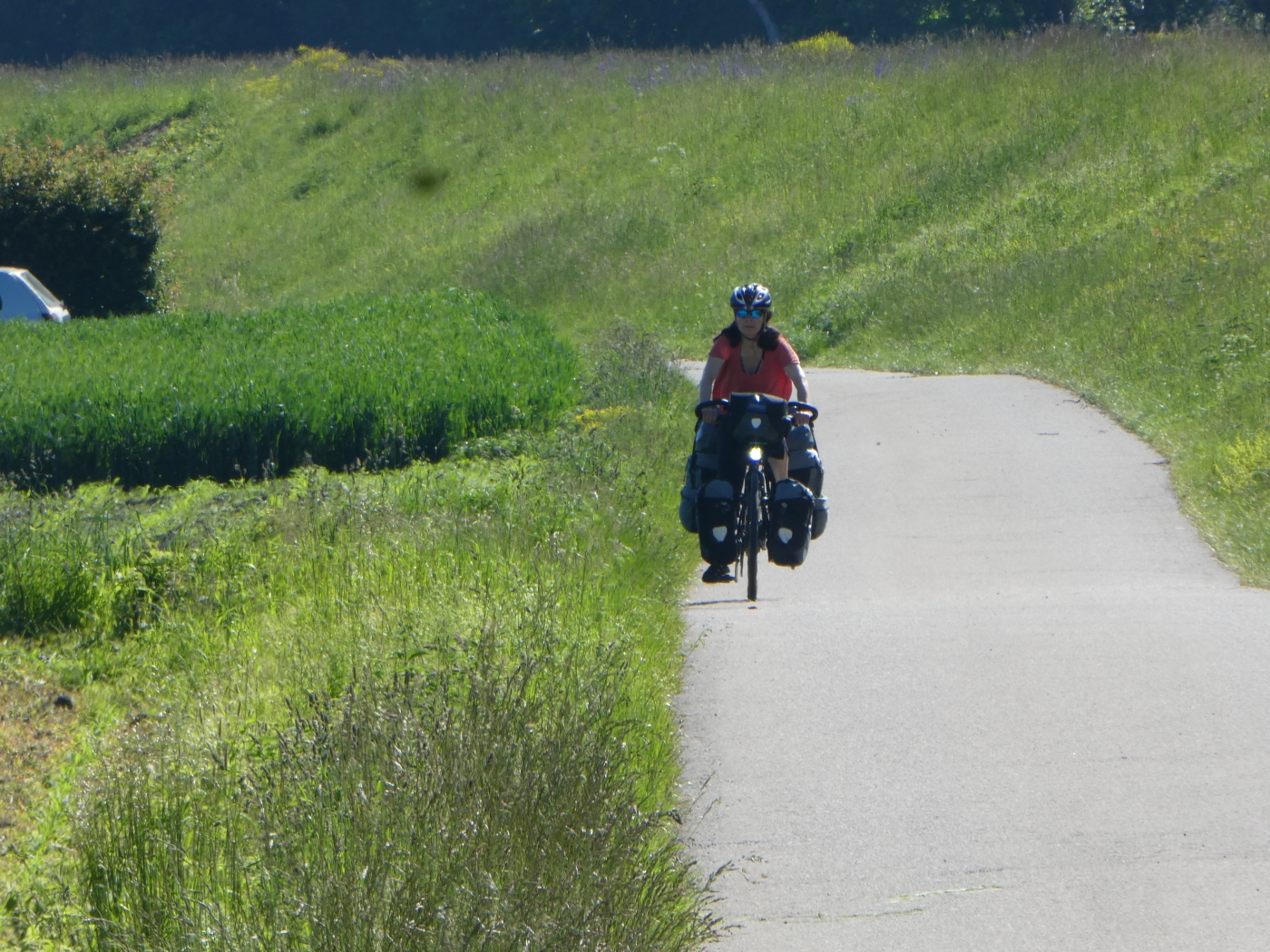 We rode out of Ulm, back through the centre, through the Fishermen’s Quarter and past the Crooked House again, until we reached the river path and we were on our way.

We had the Danube by our side, with trees around us, traffic free and it looked a treat. Without the rain and flooding to mar it, the river really had its glad rags on today and between the blue of the sky and the green tress, it fairly shimmered with a “look at me” attitude.

We pedalled over a bridge and realised we were about to say goodbye to the Danube because our route would now take us away from the river and down south, as we make our way to Lake Constance. We stopped for a final picture, to say farewell to this river that we’ve been following for weeks now and then I decided we just couldn’t leave it without marking it with a waltz. Y’know, because of The Blue Danube and Strauss ’n all that! So, while the path was quiet and there was no one about to see us behaving like complete plonkers, we proceeded to do a quick side step and do a final, farewell waltz to mark our departure from The Danube. Oh, the things we do!

We pedalled on, under trees and then I saw a dog coming towards us. It looked like it was on a mission, eyes front, power-trotting along and it didn’t have a person with it. “Y’right mate?” I asked. The dog just kept right on going, it looked lost, but marching on like it had a plan. We followed the route markers and about half an hour later we were near the town of Gogglingen and stopped to cross a road. We stopped right beside the sign post for the bike routes and what did I see taped to the sign post? A piece of paper with a photo of the dog I’d just seen and a message about it being lost. I sent a text message to the two phone numbers that were listed and tried to explain where on the path I’d seen the dog and now I just hope they’re able to track her down and find her.

On we pedalled and we had fields and countryside around us. Then, I spotted something white in the paddock beside me. What is that? Where we come from, white things in paddocks are usually sheep and there aren’t any of those around here. Getting closer now. Is that a…no, it wouldn’t be…that is a paddock isn’t it, there isn’t water hidden under there…is that a…? I think it is y’know…those are swans in that paddock! Well, of all the things. There they were, a flock of white swans, up to their bellies in the green of the paddock and it looked like they were paddling on the grass. I checked again and there were tractor tyre marks in the field so it was definitely solid ground, not just reeds or water grass, it was an actual paddock and those swans looked right at home. We’ve seen a few of them on the river, but never gracefully getting around in field of green like that!

The day was getting really warm and it was spectacular. The first day we’ve both ridden off in short sleeves and the sun beat down and I was slathered in sun screen. As we pedalled along I kept hearing in front of me. “Aaaah, gerrof!….Baaaaah, get out of it! Pfwah, get away!” It seemed Steve was experiencing a bug problem.

“It won’t help to open your mouth you know,” I called to him.

“I’m not opening my mouth,” came the reply.

“You are every time you shout at them,” I pointed out. I didn’t want him to be in the middle of  chastising a bug and suddenly find one flapping between his tonsils! We were both being bombarded by the bugs and the worst was when they got stuck in my helmet. Steve wasn’t wearing a helmet, but he was getting them in the face and mouth. I got a few in the face, one narrowly missed my mouth as I was spitting another one away, but a lot of them got stuck in my helmet, so I pedalled along, one handed, trying to dig them out of my hair between the gaps in my helmet, while also trying to keep my mouth closed, so neither of us ended up with one between the teeth. It seems sunshine brings out the flying critters too!

It was time for elevenses and we passed through the little town of Leipheim and it delivered us a bench in the shade and we paused for our morning break. 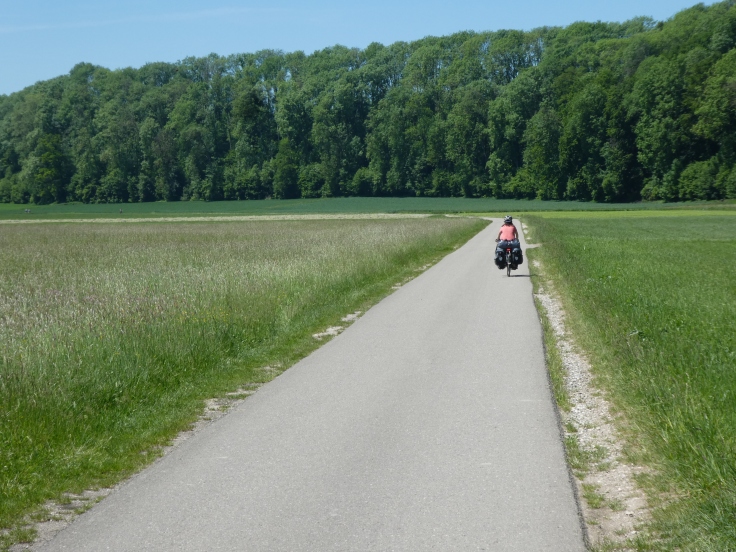 From there we had a little bit of road riding, then on a path again, beside a lake and then back on a quiet road.

We followed the signs that pointed up a small hill and our map and GPS was taking us the same way, so all means of navigation were taking us in the same direction. That’s always a good sign. But then…the road was blocked. Actually the road wasn’t just blocked, the road wasn’t actually there! It had been demolished and there was a fence, a gap and a rail line below and there was no way we were getting across that, short of launching ourselves into an Evel Knievel style jump and that sure wasn’t happening. Okeedoke, off we go on another detour, reroute and take another road in a big, wide loop around road and fields, to get to the other side. About 3km later, we were on the other side, where we needed to be, back on course and away we went.

We continued on in the sunshine and on traffic-free paths and stopped for lunch on a bench beside the road, in the town of Warthausen. We had been planning to ride to Biberach an der Riß today and we were getting close, but since it was only lunch time, we decided we’d keep riding, go past Biberach and get a head start on tomorrow’s ride. With that decision made, we just thought, as a final check, we’d better just make sure we’ll have somewhere to stay if we pass Biberach. We looked at the campsite maps and apps. Nope. Nothing. We looked at the hotel apps. Nope. Nothing there either. Okaaaay. It seems there’s a reason why all the guides to this cycle route say to end the first stage in Biberach. It sees there just isn’t anywhere to stay for about another 30km or so after that. We didn’t feel like doing an 80+km ride on such a warm day, so our decision to ride on turned into a “we don’t have a choice” stop. So Biberach it was as our pit stop. 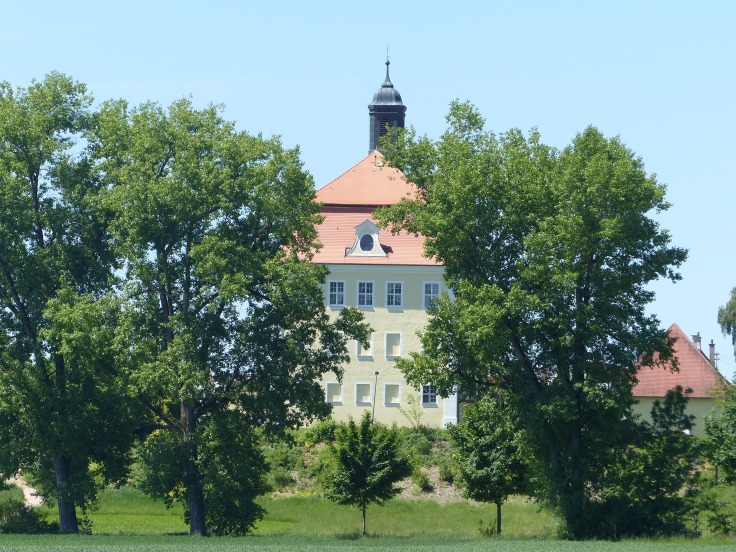 We pedalled into the town and there was a car show of some sort in the market square, with cars on display the length and breadth of the main cobbled street. I wanted to have a bit of a look around the town, so Steve found a seat in the shade at a cafe bar, enjoyed a cold beer, while I went for a roam. It was another lovely little town, with interesting buildings. I really liked the green tiles on the roof of the town hall, with the glaze sparkling in the sun. 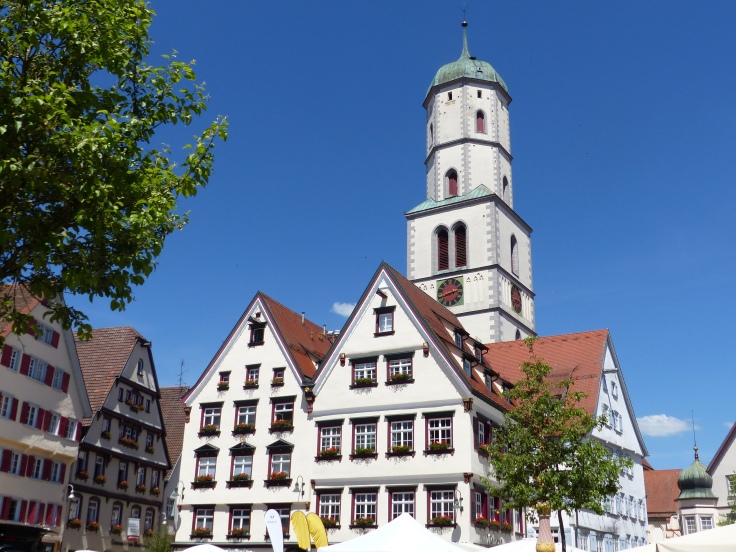 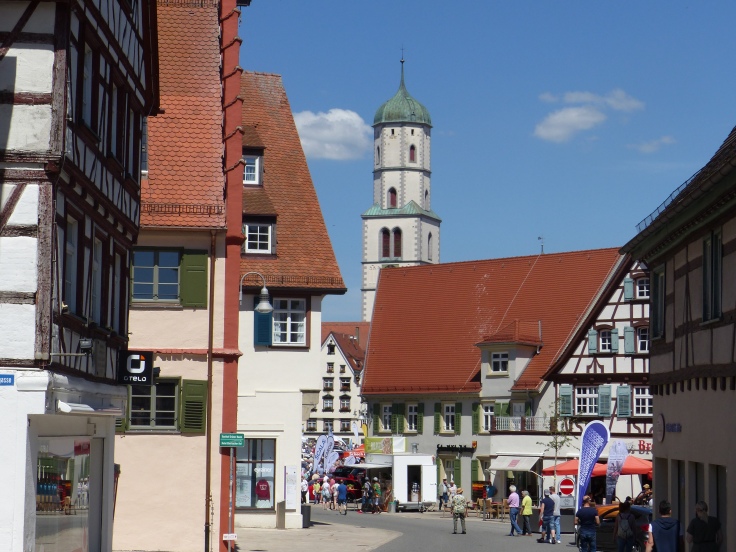 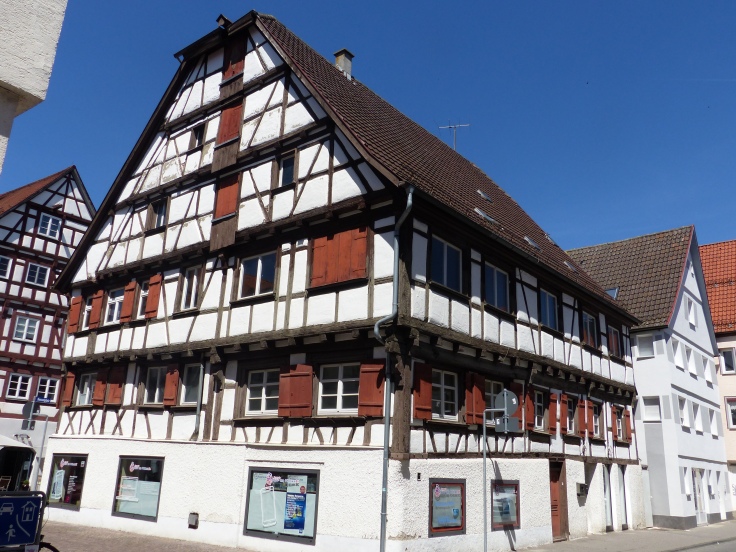 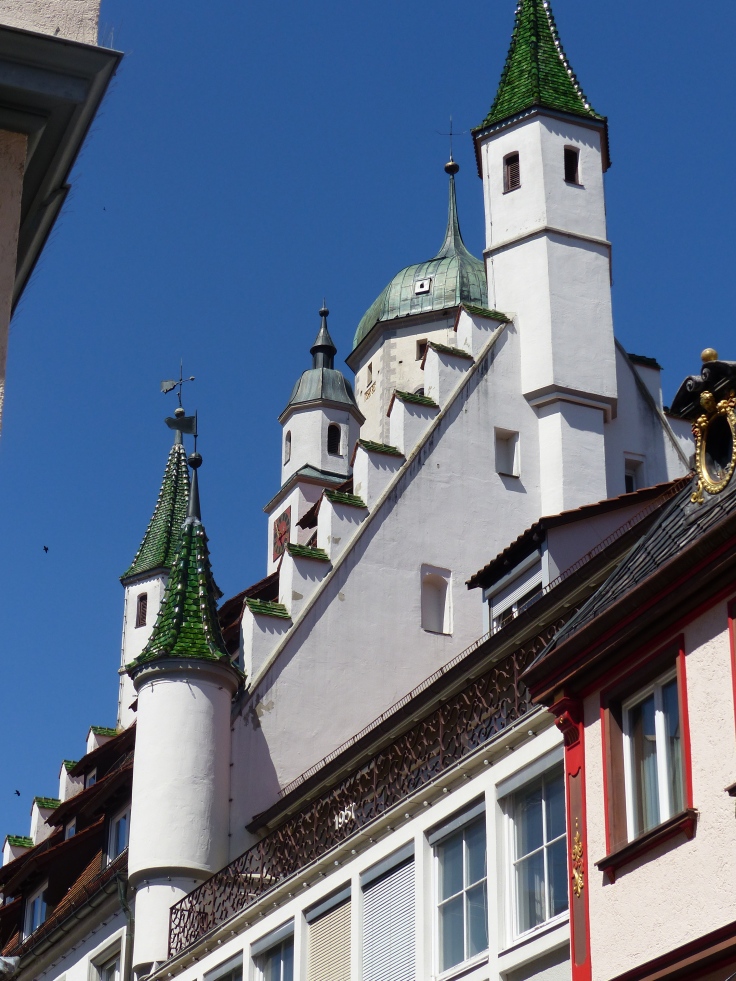 When I’d finished my roam and Steve had knocked back his cold one, we pedalled on to our final pit stop, had a post-ride cuppa followed by a cold drink and the day was done.

It was a day of waltzes, lost dogs, out of place swans, bug bombardments and disappearing roads; the complete randomness of those five features just sums up what cycle touring is all about. It’s the quintessential box of chocolates, you never know what you’re going to get.  Tomorrow we ride on and we’re not sure where we’ll end up. We’re tossing up whether to do the route in the usual four stages or try to do it in three, so we’ll see what happens. What sort of day will it be? A coffee cream or a Turkish delight? A caramel whirl or a peanut brittle? Who knows, because this box of chocolates that we’re in at the moment, is just full of surprises!

Time in the saddle: 3 hours 50 minutes 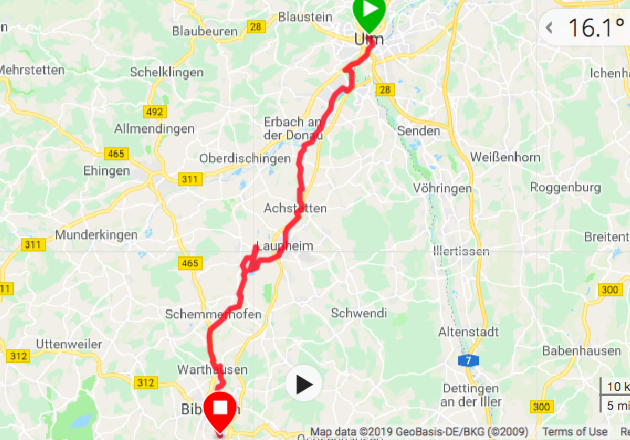