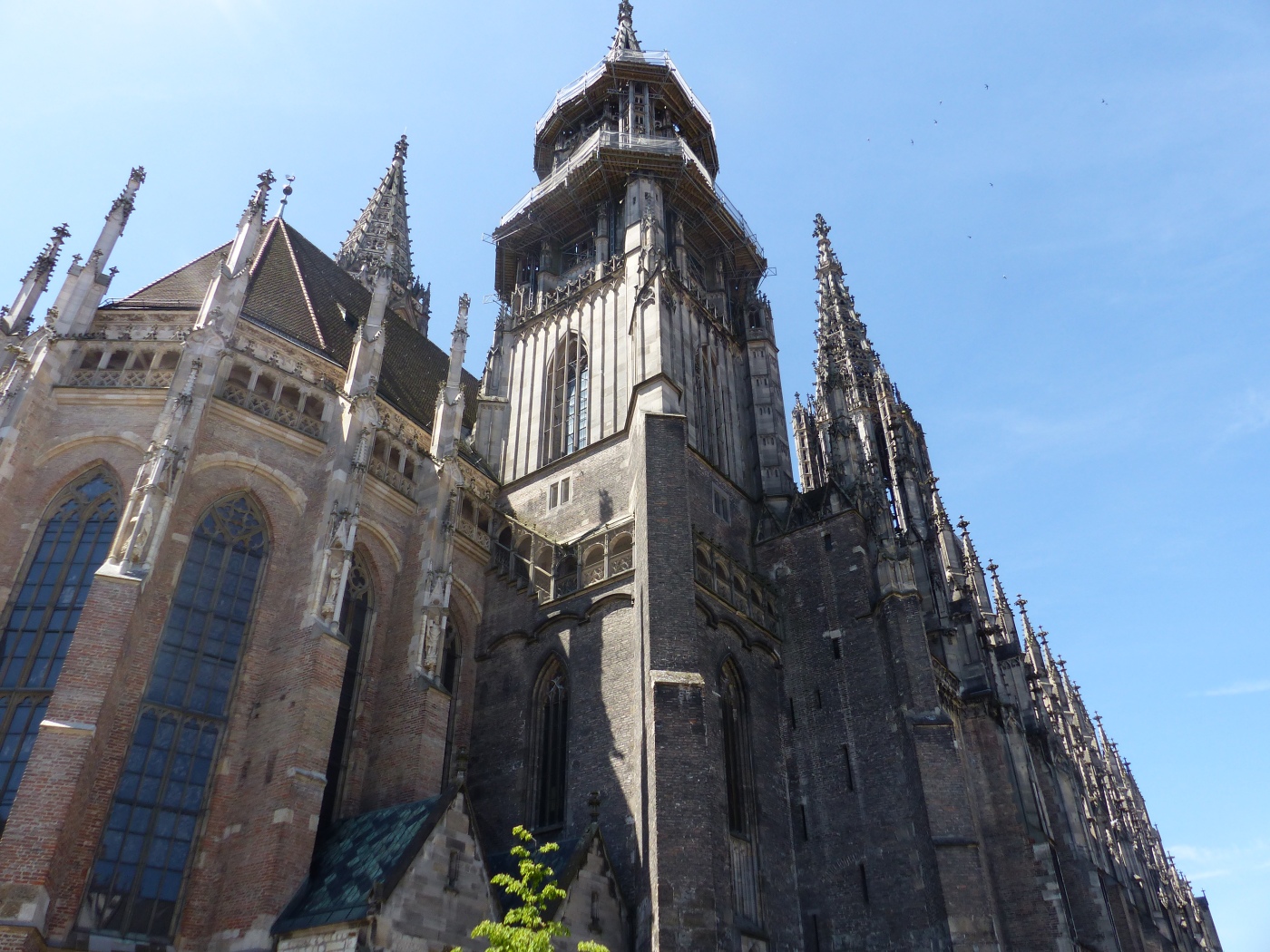 OK, let’s start with a pop quiz. Are you ready…?

Q3: Which famous person was born in Ulm?

Q4: What landmark is Ulm’s claim to fame?

How did you go? If you didn’t score too highly, then you are a card carrying member of the Club for the Ulm Uninformed, of which we were the founding members. We knew nothing of Ulm until we came and began to learn about this city. It turns out, it’s a lovely city, with some rich history and some claims to fame. So here we are, in Ulm, in the State of Baden-Württemberg.

We stepped out this morning into the sunshine and it was already warm and going to get warmer. We roamed into the central square of Ulm, where its most famous landmark towers over all below. Ulm Minster, the town’s grand church, was built from 1377 – 1543, at which time construction came to a halt because they ran out of money and it wasn’t until the 19th century that they were able to up tools again and continue working and finally, in 1890, 613 years after they began construction, Ulm Minster was finished! Its claim to fame is its spire, which is the tallest church spire in the world at 161.53 metres and 768 steps to the top. On a day like today, with the blue sky and the sun shining, it really was a sight to behold. We walked through the square, where a market was in full swing, with stalls of produce and flowers and all manner of edible choices, with table after table red with strawberries and it looked glorious on this summer’s day. I don’t think it actually is the first day of summer, I think that might be June 21, but it’s the first day of winter at home, so I’m declaring it the first day of summer here and it sure felt like it. We stopped for a morning cuppa under the gaze of the Minster and soaked up the morning and the atmosphere.

Next we roamed to the Fishermen’s and Tanners’ Quarter and this historic section of the city was quaint and cute and beautiful in equal measure. This is where the River Blau flows into the Danube and is the area of the city where the skilled craftsmen once plied their trade. The houses were gorgeous in their historic wonkiness and one in particular is renowned for its less than square corners. The ‘Crooked House’ or ‘Leaning House’ is a famous Ulm landmark because it appears to lean right over the river. It’s actually one of Ulm’s oldest residential houses, dating from 1500. It’s now a hotel and is actually in the Guinness Book of World Records as the ‘Most Crooked Hotel in the World’.  I loved the walk through this quarter, the river running through it, the buildings that were so striking and interesting, it was all simply gorgeous. 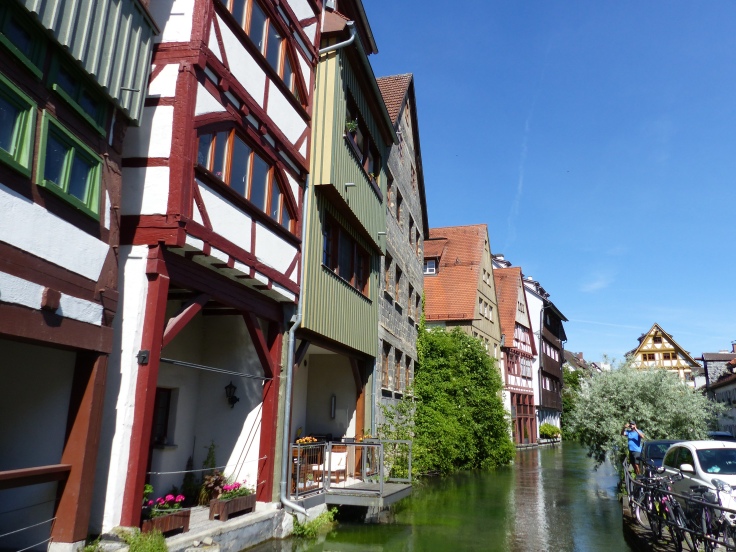 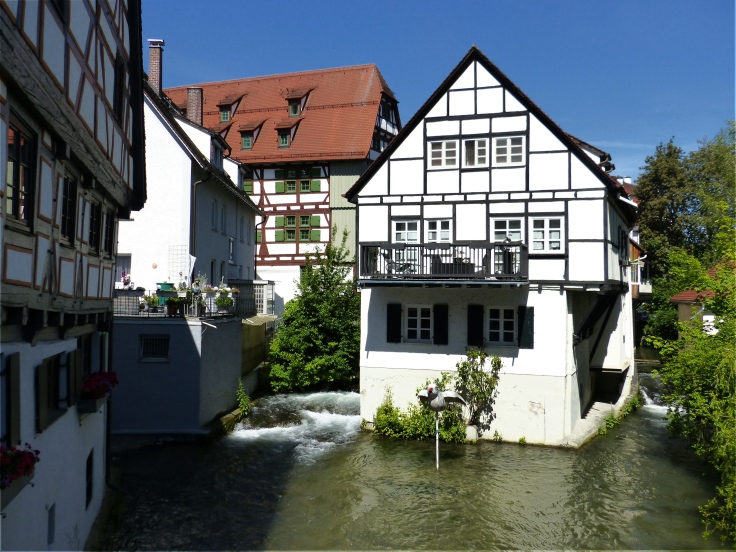 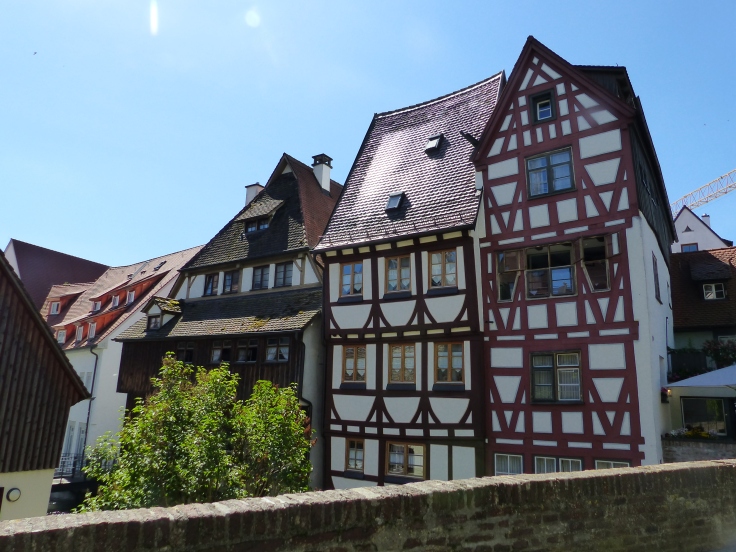 Through the Fishermen’s Quarter and we were out onto the town walls. We took a stroll along the walls, which were built in 1482, as a defence against hostile armies and today, as we walked along them, we could look down on parks and the Danube below us.

Ulm has yet another slice of fame in its story, I mean for a city we’d never heard of, it’s quite the quiet achiever! Ulm is the birthplace of Albert Einstein. Yes, he of the great vertical coiffure, was born in this unassuming town. With such a notable individual haling from the town, we expected to see mention of him all over the place. I thought there would be monuments, statues and plaques claiming association with the celebrity scientist dotted around the city. Plaques on the walls… “Theoretically speaking, Einstein stood relatively on this spot”, “Einstein’s hairdresser’s mother bought her pretzels from this bakery”, that sort of thing. But no, nary a mention of Albo anywhere. We did find his fountain, which we walked for ages and ages to find because it’s out of the city centre and tucked away in a corner between buildings and if you weren’t looking for it you wouldn’t see it and if you did see it, you wouldn’t know what it was until you actually walked off the path and around it to see his face. That’s how unheralded he is in Ulm. The fountain itself is both clever and a bit odd. It’s in three sections and the main body of the fountain is a rocket, representing technology, conquering space and the atomic threat. On top is a large snail’s shell, representing nature, wisdom and scepticism towards people’s control of technology and finally, stuck to the side, is Einstein’s head, with wide eyes and tongue poking out, representing I don’t know what, one too many shots of schnaps perhaps? Jets of water shot from the bottom of it and that was quite clever because the noise of the rushing water sounded like an engine and they were designed to look like the jets from the bottom of the rocket. As for a landmark to recognise one of the town’s famous sons, ummm, weeeellll…interesting!

As we were roaming the streets, there were of course people on bikes everywhere and I saw a family out pedalling down the street and I was so impressed with the little tacker on her bike. She was so tiny and already on two-wheels unassisted. No training wheels, no scooting along with her feet, she was on her two-wheeler, pedalling along beside mum and dad and not having to concentrate on balance or anything like that, she was in full flow conversation as she passed us, “something, something something, papa, something something, papa…”, as confident and balanced as could be on that bike. Very impressive to see such a littly already so skilled on wheels.

We stopped by a health food store / organic supermarket and picked up some bibs and bobs for a late elevenses / early lunch and made our way down to the river for a picnic. How super dooper, sitting in the shade, with the sun blazing, looking out at the river. I got some sauerkraut, which I love but hadn’t yet had, here in the country it now calls home, and I used it to fill some nice olive rolls, with strawberries for dessert and it was delicious. Steve found some vegan pastries, so he was sorted and happy too.

Our roaming continued and we stopped to look at the Rathaus (Town Hall), which was the most impressive and speccy of all the Rathauses we’ve seen in all the towns we’ve passed through. The decorative walls and the design of the building was something you just had to stand and stare at, to take it all in. It was a ‘Grand Design’ indeed. 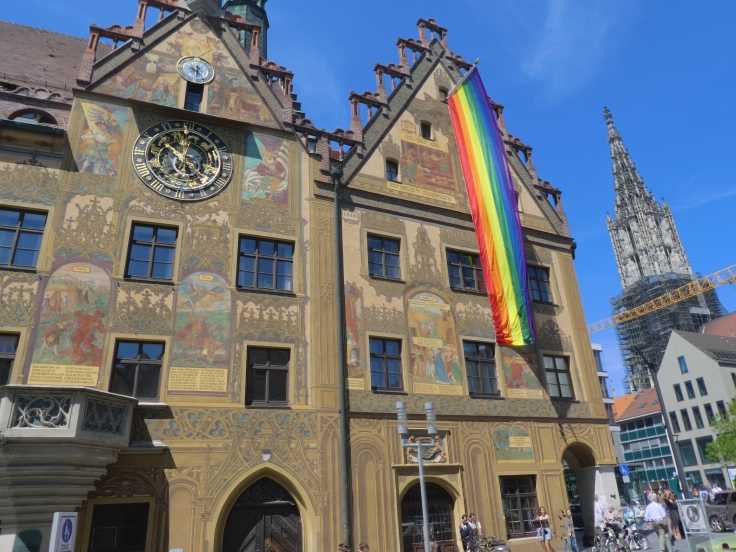 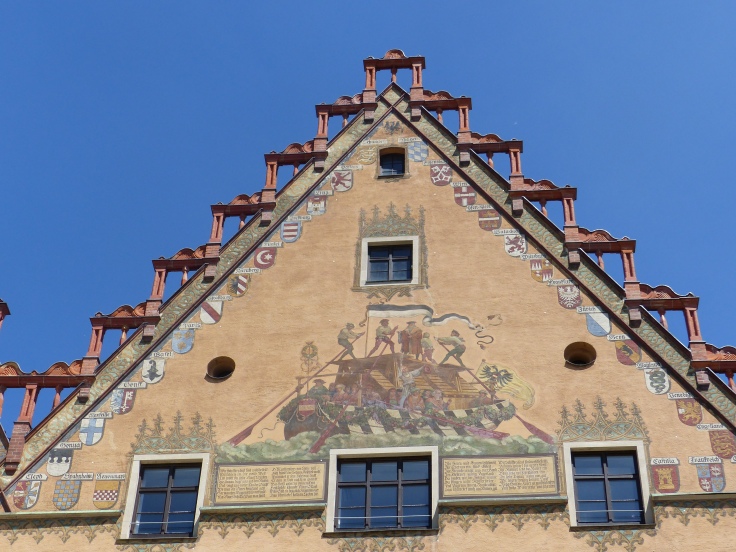 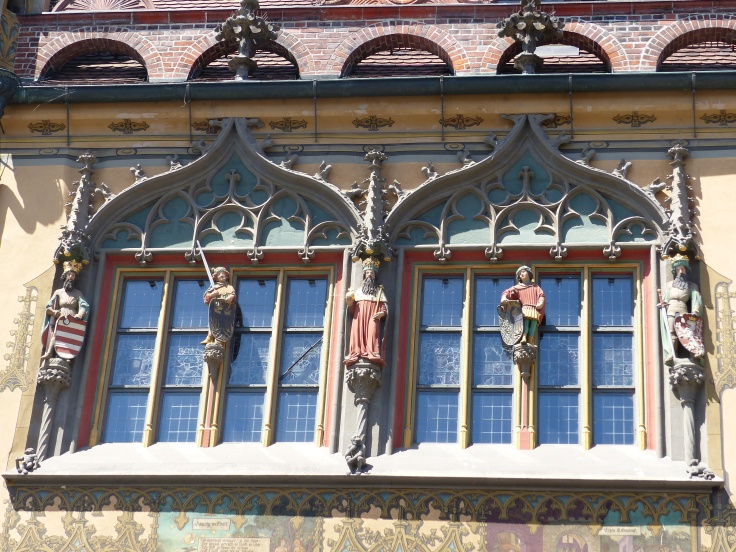 Just past the Rathaus is the Butcher’s Tower. Known as The ‘leaning tower of Ulm” it’s 36 meters high and leans 2.05 meters to the side. The story goes, it got its name because some butchers in Ulm once put sawdust in their sausages and when their customers found out, they locked the butchers in the tower. When the Mayor went into the tower to deliver his verdict on their fate, the butchers cowered in the corner, causing the tower to lean. In truth, it’s just leaning because it’s built on a swamp. Pah to the truth I say, the butcher story is much better!

With a leisurely day of roaming almost at an end, we just had to take care of our usual errands, ready to ride on tomorrow. We went to a supermarket that was another of those that was bigger than some entire towns in Tasmania. This one even had an escalator…in a supermarket! I think there are only two buildings with escalators in the whole of Tasmania and here was one just to take you from fruit and veg up to your tissues and shampoo!

On the way back from the supermarket we walked through the town centre again and the square in front of the Minster had been transformed into some festival or event. We guessed it might have been a Pride festival because there were lots of people draped in rainbow flags, we’d seen a rainbow flag on the side of the Town Hall and there was music playing and people in joyous mood and it all looked great.

What a top day of roaming. As we walked along, Steve made the comment, “Yep, I like Ulm.” We like cities that don’t really feel like cities and Ulm ticked so many boxes. It had beautiful historic buildings, quiet streets and cobbled laneways, open squares and a river running through and beside it. The bells from the Minster chimed to herald the day this morning and they are chiming still, giving an added atmosphere to an already wonderful place. It is pretty and charming and quaint and beautiful and it was just an all round lovely place to spend a day. We’re so glad we decided to do a stop over and explore, because it was so worth the visit.

Tomorrow we ride on and we change routes slightly again. We’ll be following the Danube to Bodensee Route from Ulm down to the shores of Lake Constance. It’s suggested that it’s done as a four stage ride, so we’re just going to follow that and take four days to get there, following the recommended stages and hopefully seeing some sights along the way.

Ulm turned out to be another of those hidden gems that we stumbled across as we were reading about our Danube route. It’s not somewhere we’d planned to visit or even heard of, but has become another gem for us, another little piece of gold in the memory bank. The bank is filling up, the golden moments keep coming and we’re greedy, we’ll take as many as we can get. More please.