May 25 – Deggendorf to Straubing

After the hiccups of yesterday, today was a whole lot easier and we took it easy – a shorter ride and taking our time along the way to stop and look at things, visit some towns and not a detour to be seen.

I got the day off to a start with a run, just freestylin’. I had no idea where I was or where I was going, I just went this way and that and hoped I had enough mental bread crumbs to find my way back again. I set off along the levee bank, then over the bridge to cross the river, between some fields, then through some neighbourhoods and along the road and I managed to make it back. I did run in a circle at one stage because I passed the same statue at least twice, trying to find the path back to the river, but got there in the end. It was a nice early morning trot.

Our route out of Deggendorf took us along the levee bank, so we were up above the river, which was looking calmer today, although still overly full in places. Not far along the path, we decided to take ourselves in to the town of Metten for a look. The Benedictine Abbey was established in 766  and expanded in 1726, with a library that now contains 200,000 books. The abbey church was built in 1712-1729. There was a walled garden too, which was peaceful and it was a nice quiet stop along the route.

On we went and we had nice quiet paths and quiet, single lane roads that ran between fields and farmland. At one stage we pulled over to the side of the road to let a car pass, which as it drove alongside, turned out to be a wedding car with the bride on her way. Further up the road, we passed the wedding party getting ready for some photos. The bride looked lovely and as we passed, she was in the process of chugging down an energy drink, standing on the side of the road. It was a warm morning and she had a big day ahead of her, it was nice to see there was no standing on ceremony, she just wanted that drink and fast!

At Mariaposching we stopped at a bench beside the ferry landing for elevenses. It was a glorious morning, with the sun shining and I enjoyed elevenses while being dry and warm as toast. Loovely! We watched the ferry arrive and a group of cyclists disembark and take off pedalling down the street. A few other cyclists pedalled past as we enjoyed our break and then it was time for us to join them and hit the road again.

The nice quiet road continued and we had some other cyclists coming towards us and we exchanged greetings. We had one group go past us that seemed to go on and on and on. It was a veritable peloton of touring cyclists of every age, shape and size, in various coloured cycling garb and they gave big waves and cheery hellos and smiles all round. It does put a smile on the dial when you have moments like that! I’ve had some quite surprised responses from some fellow cyclists that have seen me and my load. With groups of cyclists on organised tours, I’ve had some people look at me as they go past and give a “Whoah!” and others a “Phwor!” accompanied by wide eyed expressions of disbelief at the number of loaded panniers and bags attached to my bike. I guess it does look like a lot, especially of you’re on a tour where you don’t have to carry anything on the bike, because that’s all done for you. I can declare though, that everything on our bikes is used and essential, nothing is a luxury item or surplus to requirements!

We came upon the town of Bogen and I was curious to see what this place would be like. Slightly different spelling I know, but if you’re Australian, you might be thinking this is a town for people with sheepskin moccasins, tracksuit pants, flannelette shirts and mullets. I pedalled on with anticipation. As it turned out, Bogen was a nice little town, with those charming coloured buildings again and we sat briefly for another short break in the sunshine, watching the town going about its Saturday business before continuing on our way. Not a missing tooth or mag wheel to be seen! 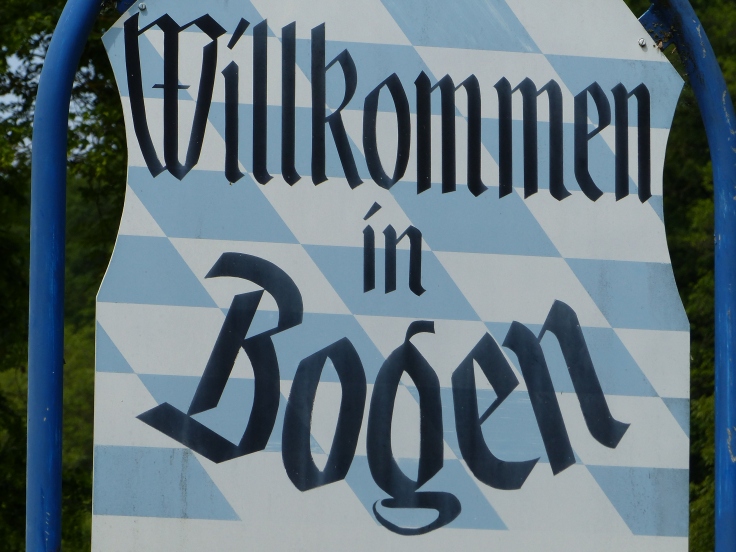 We soon arrived at our pitstop for the day, the town of Straubing. We are finally camping again, in a nice place, with a nice grass pitch just a couple of kilometres from the city centre, but surrounded by trees and the twittering of birds. After boiling the kettle and having a post-ride cuppa, we took to the wheels again to ride in an explore the town itself.

What a thoroughly delightful, pretty and charming town Straubing is. All  the streets were cobbled, which was very nice to look at, but man-o-man they gave the rear-end a thumping riding over them! The centre was busy with some sort of event or festival taking place and we joined the crowds as we roamed and pedalled along the streets looking at the beautiful Baroque architecture. 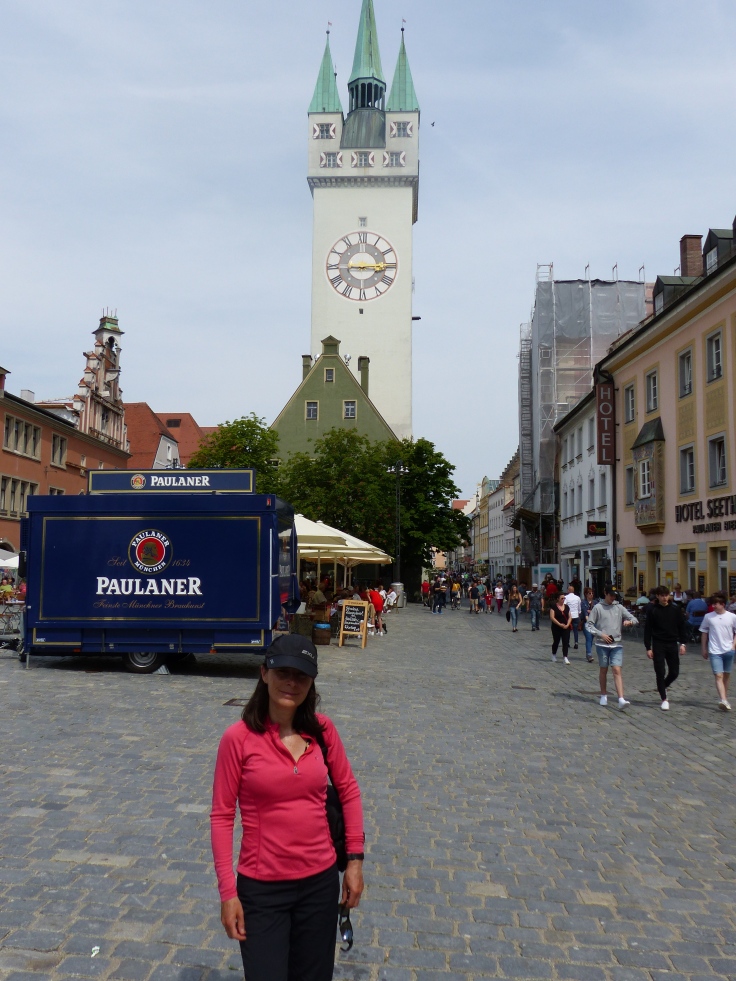 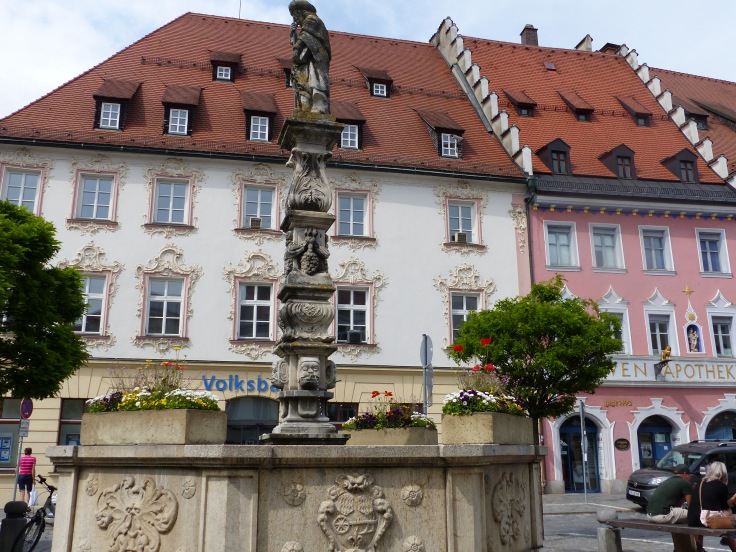 There was a brass band playing and as they started up, I recognised the tune. “Simon and Garfunkel,” I said to Steve, as Bridge Over Troubled Water wafted down the square. When that finished, it was followed by Mrs Robinson and then The Sound of Silence. “A German Simon and Garfunkel brass tribute band!” I said. They were really good and I strolled along, without a care, quietly singing along to to myself. The next song was No Business Like Show Business, so they did have a playlist that extended beyond the folk duo. They were just excellent and after our roam and pedal about the town, we sat to listen. There was a beer stand and food stalls, so Steve partook of a beer, while we sat at a table, soaking up the atmosphere and listening to the fantastic toe-tapping band. We joined in the enthusiastic applause as they took their bows and then we mounted our steeds again, choofed off to find supplies, then back to the tent we went.

We have now been joined by six other tents, most of them with bikes, so we are all happily pitched together under the trees, with the birds having their evening chattering conversations from the branches. It was nice to have a slower day and to find our way to a destination without navigational troubles along the way. We had time to enjoy the pedal, stop along the way and then have a pleasant roam in a lovely town at the end of the ride. In fact, I hit another trifecta today, with a run, ride and roam all in the one day. Perfect! Even more perfect was that we could do it all in sunshine. We ride on again tomorrow, still following The Danube, to meander our way, as this great river does, to parts unknown, waiting to be explored by two Tasmanians, tootling along and enjoying the discoveries to be made. On we go…

Time in the saddle: 3 hours 12 minutes

4 thoughts on “An Easier Day”