“Hallo” is the one German word I feel confident saying, since it’s a direct translation of “Hello” and virtually identical so it rolls off the tongue with ease. So confident am I in the use of this one word, that I was reciting it with abandon today.

We packed up early from our campsite amongst the early morning comings and goings of our fellow campers. Campsites always amuse me somewhat. It’s like you see people in all their carefree abandon, especially the men of late middle age. This morning they were happily making their way over to the toilet block in nothing but their undies, as relaxed as could be. It’s as if they adopt a new way of living and uber relaxed mindset, “I am on holiday, I am not forced to live my routine life, I am living in a caravan/motorhome/tent and that darn well entitles me to release the shackles of everyday expectations and live loose ’n easy.” So there were people strolling about in dressing gowns and underwear, as happy as Larry. It has to make you smile. As we were leaving, we chatted to the German couple beside us, a pair of fellow cycle tourists. They asked where we were going and we asked where their route would take them.

“Where are you from?” they asked.

“Whaaaaat!! We just spent the last two years in Australia! Which part of Australia are you from?”

“Noooooo! We spent the last two months in Tasmania!”

Who’d have thought it! We asked if they’d cycled through Australia.

So I guess they were there during our bush fires. They went through the centre and the top end and I told them they’ve probably seen more of Australia than we have. When we told them of our planned journey on the bikes, they said, “You are probably seeing more of Europe than we have seen!”

They were a lovely, friendly, chatty couple and we wished each other an enjoyable onward journey.

We rode into Krems yesterday through the busy commercial area, but we rode out today through Stein and it was lovely. Old buildings in pastel colours, cobbled streets and houses in narrow lane ways. It was beautiful. 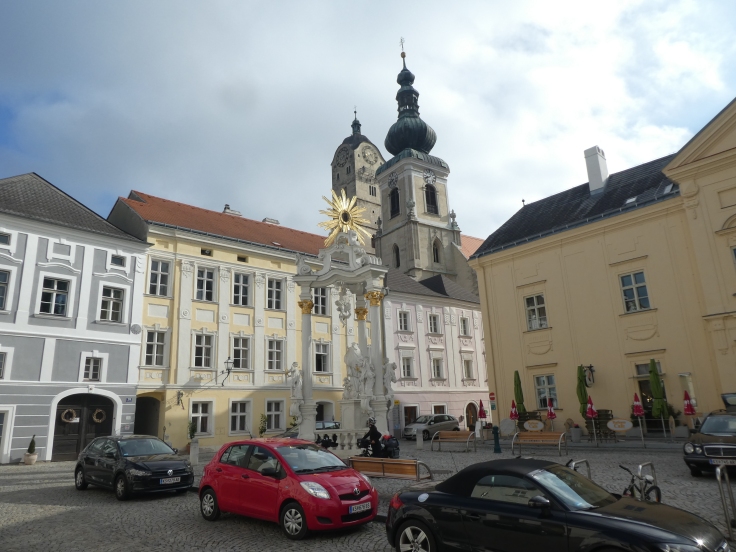 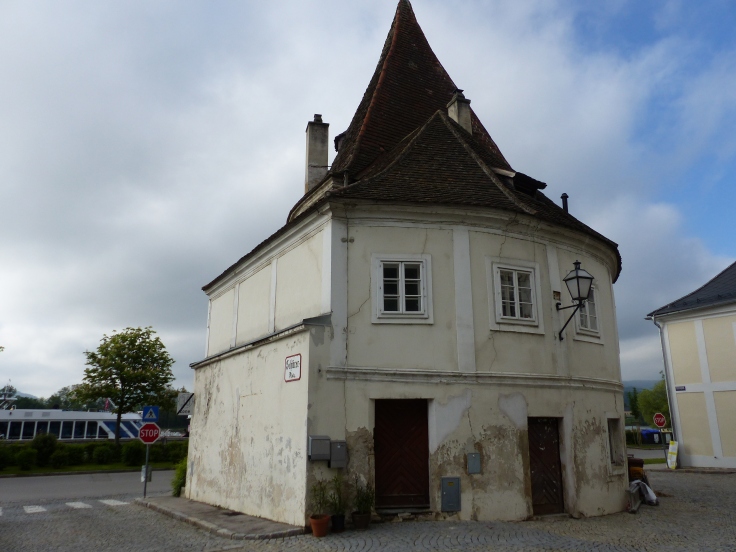 The beautiful scenes continued for most of the day. So much so that it took us an hour to go the first 6 km because we stopped so often to look around us or take photos. We were following the Danube Cycle Route again and it took us along the Wachau Heritage Trail, a UNESCO World Heritage listed trail that weaves through Renaissance towns and the Wachau wine growing region, with ruins of castles and fortresses, all alongside the Danube. As we rode along, it was just town after town of gorgeous, historic streets and buildings and each one was so close to the other, that we were continually passing through these beautiful villages and towns, with castles on the hillside and amazing terraced farmland. The steep hillsides were still being farmed with stone tiers and terraces cut into the side, with people up there working the land. We were also clearly in wine country because we rode through a lot of vineyards, that added row upon row of green to the backdrop of farmland and rustic stone of the towns and villages. Beautiful.

There were a lot of tourists in each town, site seeing or on walking tours with guides. We stopped on the side of a street as large group walked past with their guide. There was an American man bringing up the rear, talking to a woman and as he passed me I heard him make the comment of the day. “When you’re fifty-five and retired and your dog’s dead and your kids have left home, that’s when life begins.” Well, there he was, walking through some beautiful historic towns along the Danube in Austria, so I guess he was living life! 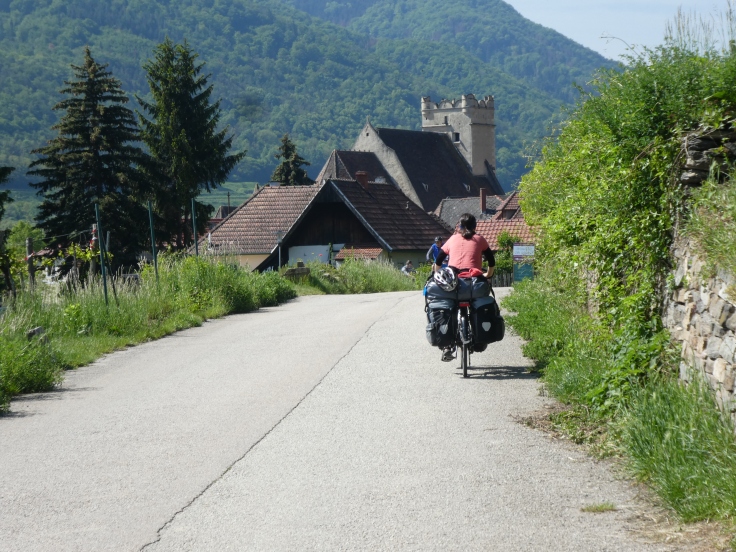 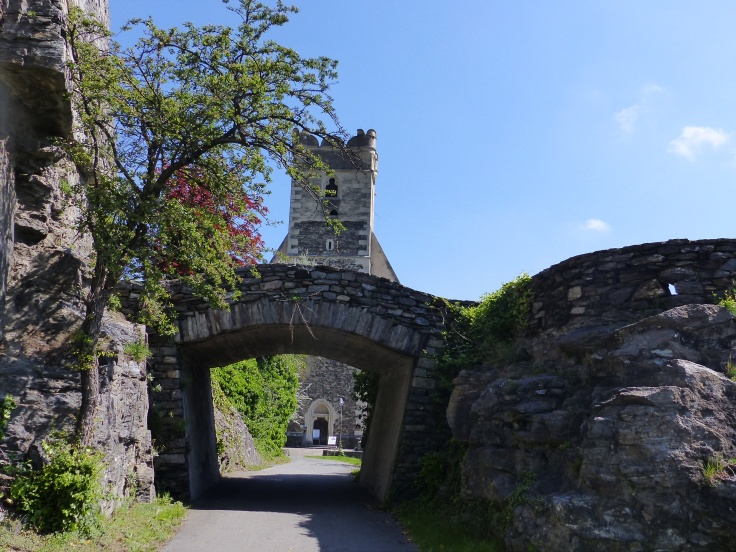 There were also a lot of cyclists on the trail and, being Saturday, a lot more than we’d seen so far and a lot of kids and families. Each one who passed by, I would say, “Hallo” and usually got a reply, sometimes they got in first and smiled, or waved and gave me an “Hallo” to which I waved and repeated the greeting. It was a very cheery ride, with cyclists of every age, shape and size coming towards us on the path and each of us giving an “Hallo” as we pedalled past one another. It was very cheery and the one and only German word I can say with complete confidence was put to constant use. It was great!

We stopped in one of the small towns for Steve to find something for elevenses and while I waited outside the supermarket, I watched as women came out and put their shopping on their bicycles and pedalled off. I just love seeing this – bikes as modes of transport and women in their sixties and seventies doing their shopping, then getting on their bike and pedalling off. I watched one woman, who came out of the store with a large cardboard box, and she began to push and shove and coerce that box into the basket on the back of her bike. She still had a big, full bag of groceries with her too, but she simply slung that over the handlebars and off she went. If only there was a bit more of that back home. A little less car and a little more foot to pedal.

Just up the road we stopped on a bench in a lovely little town for elevenses.

We pedalled on, seeing more vineyards and lovely towns. We weren’t on the river bank but it wasn’t far from us, just across the road. We came into Melk, where we stopped to pick up supplies for a couple of days, with everything being shut here tomorrow, then pedalled on to find our campsite. As we were leaving the town we rode down an 18% hill. I stopped.

“Are you sure we’re going the right way?” I asked Steve.

“Are you SURE? I don’t want to have to pedal back up another 18% hill if we have to turn around.”

“YES we’re gong the right way,” came the emphatic response. Steve did his usual daredevil free wheel down the slope, I braked my way to the bottom and we were indeed on the right course.

We found the campsite, pitched the tent, had a quick bite to eat and then I set off for a run. Not so picturesque this time, a 10km trot along a busy road, up and down some hills and then a few km’s at the end beside the river. Not quite as peaceful and scenic as the last few runs, but still good to get some more k’s in the legs.

While I was out running, Steve did some more maintenance on the bikes, declaring on my return, “Your gears are hopeless!” Yes, I’d agree with that. My gears give me grief every day. They skip, the don’t engage, they clunk and generally behave in a very unreliable way. Steve did his best to work on them, but still couldn’t get them right. Oh well, one of the many things we have to apply the mantra to –  “adapt and overcome”.

Then it was down to business to cook up some nosh on the little Trangia and while we were doing that, a solo cyclist arrived towing a little wagon behind her bike. I thought there was going to be a child in there, but no, it was a dog. So she’s pedalling around with her furry family member with her. She attended to his needs before her own, then they lay down in the sun together, quite happy.

We ended the day with a brief postmortem of our election result from back home, after streaming the results online and hmmmm, nothing more to say about that. We voted in Vienna, the results are in and…that’s that.

Oh, but the big news of the day was…we had sunshine again! You little bee-yoo-tee! It was sunny and warm and we both shed layers and it was brilliant! We had a fantastic ride today, with sunshine, beautiful towns and villages and scenery, cheerful people giving us waves and greetings and a nice patch of grass at the end, with the kettle on and a cup of tea. Loovly! We don’t know how long this weather will last, we’re reaching our quota of consecutive days of fine weather and there’s rain and storms coming up in the forecast, but for now, we will enjoy the rays we have, the expanse of blue sky, the warmth beating down from above and just relish every minute. Another ripper day in the can. More to come. On we go. Power to the pedal!

Time in the saddle: 2 hours 55 minutes