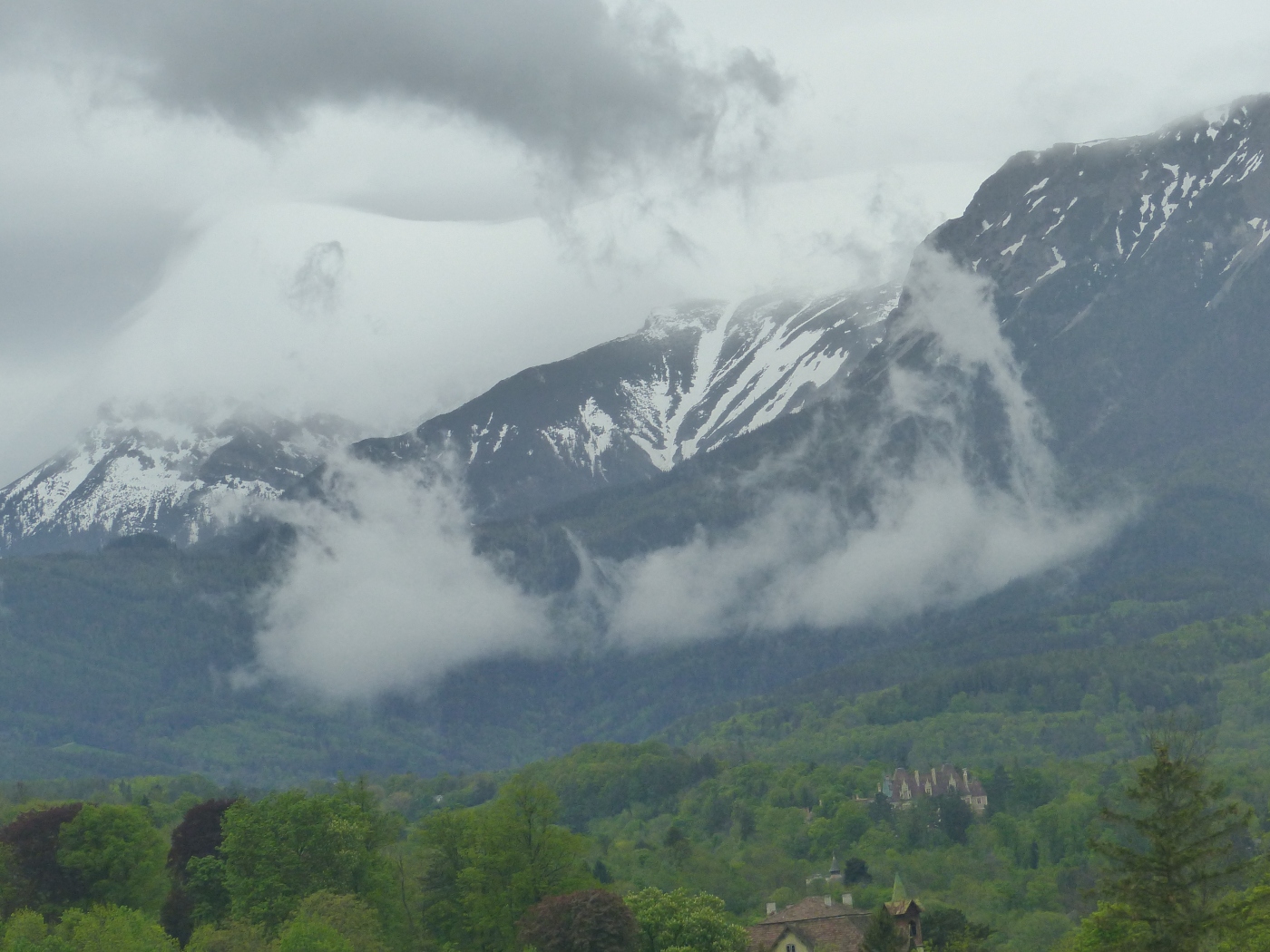 Today is Mothers’ Day. Happy Mothers’ Day to all the mums out there. We began the day with some video calls home to wish our mums a happy day and to have a check-in chat with folks back in Tassie.

We sat planning our onward journey last night, heading for Vienna, while the rain, thunder and lightning had its party outside. We knew we’d be riding in rain, that’s going to hang around for a while, so we thought we’d do a short ride, so we weren’t out in it for too long. We looked at the cycle route to Vienna, about 160 km, so we were thinking three day’s ride to get here. We looked at the map of the route to see what towns there were along the way to check out accommodation options. We wanted to make sure we wouldn’t be stranded with nowhere to stay, so wanted to make sure we had options along the route. We found some towns we’d be passing through and found there was accommodation available. Looking good so far. Even the route was looking good – a big climb up a mountain at the start but then a long downhill into Vienna. That sounds good. A bit of a slog to begin with, but get that out of the way and we could get some free kilometres on the downhill. Still looking good. To help us decide how far to ride, and where we might end up needing to stop, we started looking at weather forecasts for the towns we’d be passing through once we left Bruck an der Mur. Then things took a turn for the unexpected. It was going to be raining in Bruck an der Mur as we left. OK, nothing unexpected there, we’d just be riding in rain again, so we’d do a shorter ride. But…the towns we’d be riding through weren’t showing rain. No rain. In those towns it was…snowing! Yes, you heard it here first folks, it was going to be snowing along our route until Wednesday! Nooo, we thought, that can’t be right. We consulted another weather forecast and it gave us the same story…snow to the 700m level and we’d be riding at 1000m. Just when we think the weather has been as nasty to us as it can possibly be – rain, hail, storms, wind, it’s not satisfied with that, it has to give us snow. COME ON!

OK, now what? Will we ride in snow? Do we stay where we are and wait for it to clear later in the week? After our slippery slide down the steep road in the wet in Croatia, that left us both hitting the ground and giving Steve a dicky knee, the prospect of slipping and sliding on a road down a mountain in the snow wasn’t looking too desirable. Also, as well as being Mothers’ Day, today is also Steve’s birthday. “I don’t really want to spend my birthday wet and miserable,” said Steve. Fair enough. So, plans changed yet again. We’d still head for Vienna, but we’d have to hit the rail again and leapfrog the snow. Better to spend the time in Vienna and explore there, since we’d always intended to spend a few days there, than stay where we were and just wait, or risk things getting hairy scary riding up and down hills in snow. So…as much as we really don’t like skipping places and really, really don’t like taking the bikes on a train…again, it just seemed to make more sense to jump the snow and choof off to Vienna by rail. Then at least, Steve could have his birthday somewhere memorable in a good way, by celebrating it in Vienna, rather than memorable in a wet, cold, not so pleasant sort of way. We had top birthdays on our last big cycle tour, with Steve having his birthday in Paris and I had mine when we were in Florence, so having this one in Vienna seemed like a nice plan. Off to the station we go.

It was still raining, so we put on those oh so familiar coats again, ready to pedal to the station. Steve discovered that the hood of the Orange Wonder could fit all the way over his helmet, so he could stay totally dry. Mine doesn’t do that, so in the spirit of MacGyver, I liberated a complimentary shower cap from the hotel and put that on my helmet and we were ready to ride. I’m not sure which of us looked the most supremely attractive – Steve with his orange head looking like a cross between a Teletubby and something from Doctor Who, or me riding off with a shower cap on my head? Oh, aren’t we precious!

We bought our tickets for the train and discovered we would have a total of two minutes to get the bikes and all the panniers on board before it took off and it was one of those trains with four narrow, steep steps to get up into it from the platform. We waited…here it comes…it’s slowing down…there’s the bike carriage…it’s stopping. GO! We took off and as soon as the doors opened, we dragged the back panniers off the bikes, Steve leapt on and I passed the front of his bike up, so he could drag it up the steps and get it on board. One on. Then I lifted the front of my bike up, he took hold of the handlebars, hauled it up the steps and got it on. Tick-tick-tick-tick, not much time left. I grabbed panniers and rack packs and started passing them up and then threw the last bag over my shoulder and hurled myself at the steps. We were on! The doors closed. Phew. We leaned the bikes against the side of the carriage and settled ourselves in. Then, at the next stop, a lady got on with her bike, so we made room for her by hanging ours up and then Steve took hold of her bike and hung it too. He was struggling with it, so I don’t know how she would have got it up there herself. I know I sure wouldn’t be able to do it and pick up the bike and reach to hang it as well. It’s a very tricky storage arrangement. One of the many reasons we don’t like rail travel with bikes!

We watched the countryside flash by and saw the snow out the window, rather than on our wheels, had another elevenses on a train and 2½ hours later we were pulling into Vienna. We also discovered that rail travel is a lot more expensive here. When we caught the train from Trieste to Ljubljana, a similar length trip time wise, it cost us the grand total of €8 each. This trip, cost €36 each. A bit of difference there.

We had a bit more time at Vienna station to get the bikes off, so while still a hassle, it was a little less stressful. After a walk through the station on an unsuccessful mission to find somewhere to sit while we waited in the warm and dry before we could check in to our accommodation, we decided to just head out and make our way to the hotel. Brrrrrrrrr, as soon as we got outside it was COLD! We were greeted with icy wind, drizzling rain and cold, cold temperature. We plugged our destination into Doug the GPS and set off. We got lost. A lot. Doug was not “Doin’it Doug” this time, he was most definitely “Dopey Doug” because it would tell us to go one way, so we’d go that way and then it would beep at us to tell us we were going the wrong way. It took us a while to get going in the right direction and we did end up on a four lane road we shouldn’t have been on, but we eventually made it to where we needed to be. The bikes have a nice warm room inside to stay, we have a place to dry off and warm up and begin our time in Vienna.

One of the first things Steve did, was to take off his face fur. He turns 49 today, so thought he might get rid of the grey Grizzly Adams look, take a few years off and go fur-free again. When that task was complete, we set off to celebrate with a birthday meal at a nearby vegan restaurant. Steve enjoyed steak and chips (seitan steak) with sweet potato fries and garlic bread, which he declared a delicious and memorable birthday treat, washed down with a beer and we finished off with a piece of birthday cake in the form of a rich and scrumptious Sachertorte. As we walked back, I was waiting to see if Steve would notice any difference with his face. Sure enough, “Brrrrr, that’s icy!” he said, “my face feels cold.” It was freeeezing, with drizzle and an icy wind and without that facial insulation, he was feeling it!

So here we are in Vienna, now ranked the world’s most liveable city. Melbourne has had that title for seven years in a row, but last year Vienna pipped it for the top spot. We got here a bit sooner than expected, and via a mode of transport we weren’t intending to use, because we weren’t expecting…well…snow! We’re here for a few days to roam and explore and I think I’ll be wearing every layer I can possibly fit on me, while trying not to restrict my arm movements to that of a Lego person again.

Surely, SURELY the traditional May weather has to arrive some day. Pleeeeease! The forecast for a few days’ time has thunder storms for the day we intend to ride on, so I’ll be crossing fingers, toes, earlobes and eyelashes, hoping that the weather gremlins have had all the fun they need, leave us alone and go and pick on someone who likes or needs rain, cold, wind and snow. That’s not us at the moment, thank you very much, begone gremlins, begone!

Still, sites to see, things to learn, nooks and crannies of this city to roam and explore, discoveries to make. Layer up! Let’s go! There’s always a cup of hot tea waiting at the end!

Time in the saddle: 34 minutes

4 thoughts on “The Weather Plays Its Trump Card”