Move along, nothing to see here. That was pretty much the theme of today’s ride. Not much to see. We were following the Mur River Cycle Route again and this had me thinking we’d have a ride similar to yesterday – riding a nice flat path beside the river, but no siree that was most definitely not what we had.

We rode out of Graz along a cycle path, passing lots of runners, cyclists and walkers, with people out at Saturday sport. We saw a soccer game and a beach volley ball centre and Saturday activities were in full swing.  On the way to the cycle path, riding through the streets, Steve managed to run a red light just as a police car came around the corner. Great timing! “Stop!” I called, “red light!”

I pointed at the red arrow he’d just whizzed past and the police car continued on its way, so either they didn’t see, or saw that we knew what we’d done, so didn’t feel the need to stop and tell us, or they saw and just weren’t bothered because maybe there are so many bikes and people jump lights all the time. I don’t know, but it was comic timing at its best.

Once we’d passed Graz we still had a designated cycle path for a lot of the ride, but it was beside a highway. Where was the river I wondered, no river to see here. The path was reasonably flat, so we made good time but all there was to see, was just a train line, a highway, power lines, service stations and the sorts of things you see on a busy road. No real scenery to speak of, so not much to look at and not much to photograph.

At one point we did see an interesting looking building on the hillside, so that was a brief break from the “not much to see” string of kilometres that we’d just had.

Then we passed some railway arches that dated from 1844, so that was something else a little different. 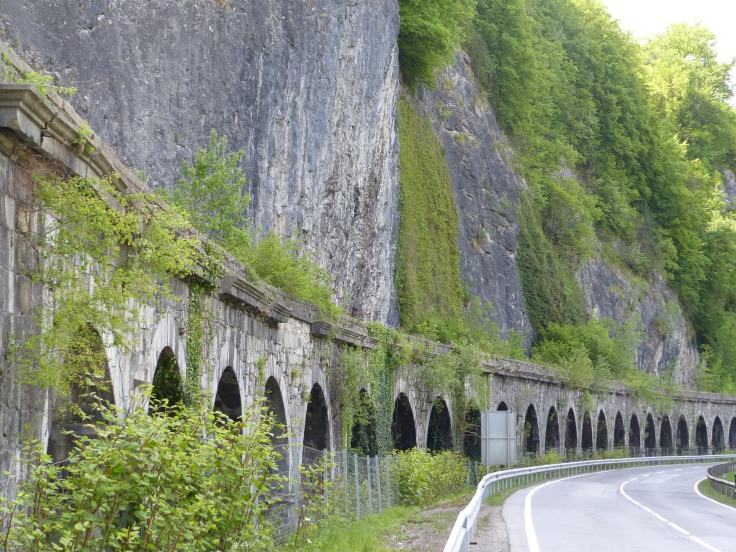 We stopped at a sports centre for elevenses and the bright note of the day, was that we were experiencing sunshine again. We weren’t expecting it to last, but while we had it, we were enjoying it. Then we pedalled on and a few minutes later rode through a lovely little town that would have been a nice alternative elevenses stop. There were other cyclists sitting in cafes and another cycle tourist having a pit stop, so it looked like a favourite cuppa stop along the route. It was nice to finally be off the highway.

As we rode on, I did look at the hills around us and I was intrigued by the houses dotted along the hillside. I couldn’t for the life of me work out where their access was. I could see no signs of a road and they were right down the hill, perched on its side. How did they get there? A helipad would have been the easiest way in!

On we continued and at least now we were on a path out of traffic. We took a turn down towards the river. There it is! I can see it! This must be it, the path is going to take us along the river bank again. No. The path turned away from the river again. Sheesh, what is going on!? We rode through a section of farmland and things were looking up. Then…things did look up, quite literally. Up a steep hill. Where did that come from? I thought we were supposed to be riding along a river. Rivers don’t flow up hill, what’s going on here!? We didn’t get the river to ride beside at all. I could see glimpses of it down below us, but we were going up. From then on, we were pretty much riding the camel. We’d go up…we’d come down…we’d go up again…we’d go down. Up and down, up and down, like wheeling along those humps of a camel. We did get some greenery beside us, which was nice, but it was just up hill, down hill, with the river teasing us by staying anywhere but beside us. So much for a river route. Then, when we did get to go down, our path ran beside rail lines and under rail tunnels, so a bit busy and noisy again.

We passed quite a few hikers and cyclists out on the same route as us, none of them loaded up like we were of course, so they were cruising those hills no worries at all. We were slogging up them. We stopped at a bench in a little village / neighbourhood to have some lunch and a breather.

On we went and the path dipped down again and it seemed we were going to be beside the river again. Lovely. Ah, no, no we weren’t. The path turned again, went through a little tunnel and then gave us a kicker of a steep little hill on the other side. “That was a bit cruel,” commented Steve. We had been teased by a river path and then had another hill thrown at us, just to shatter our thoughts of a nice flat river ride.

Then we had the weather. It was forecast to rain later in the day, almost timed to when we’d be arriving at our destination. With about an hour left to ride, the wind picked up, the sky grew grey and the first drops of rain landed on us. The race was on! Could we beat the rain before it struck? Could we…could we…no we could not. It got heavy enough that we stopped to, once again, don our coats. I secretly think Steve was hoping it would rain, so he could put his brand new coat into action. So the fancy shmancy replacement coat got its first outing.

Thankfully the wet didn’t last too long and we rode a few more ups and downs, including some steep uphills onto bridges that were thrown in just to mock our tiring legs, but we eventually pedalled into Bruck an der Mur, a little town sandwiched between the river and a railway line.

So…another ride in the bag and this one was really just a ‘getting the job done’ sort of ride. Getting from Point A to Point B with not much to do or see along the way. Just a day at the office. A few more hills and a bit more rain too, just to make sure we weren’t let off the hook. On arrival it was action stations to get supplies because supermarkets close earlier on a Saturday and everything is closed on a Sunday, so we had to stock up on food and supplies to last us until Monday. I’m not looking forward to hauling that extra weight up hills tomorrow. A few more breathers might be needed on the way up. On the walk back from the supermarket, the rain started to pitter patter down again. Then a while later, it pelted down with a side order of thunder and lightning. Sigh…eye roll…huff…head shake.

When we left our accommodation in Leibnitz yesterday, the lady told us they usually get sunshine and nice weather here in May but it’s been unusually cold.

She smiled and pointed at us, as if to agree that, yes, it must have been us.

We really would like to get a break with the weather. I mean, it’s great being here and every day is amazing and we do get patches of warmth and sunshine, but after our cold, rain plagued trip a few years ago, we thought we might break the jinx and have a more positive meteorological experience this time. So far it seems not. Oh well, it’s only water and it’s only wet. It dampens us but can’t dampen the experience because how lucky are we, to be here doing this! So…superpowers of attracting lousy weather or not, we shall continue to have a super time! Up, up and away!

Time in the saddle: 4 hours 17 minutes 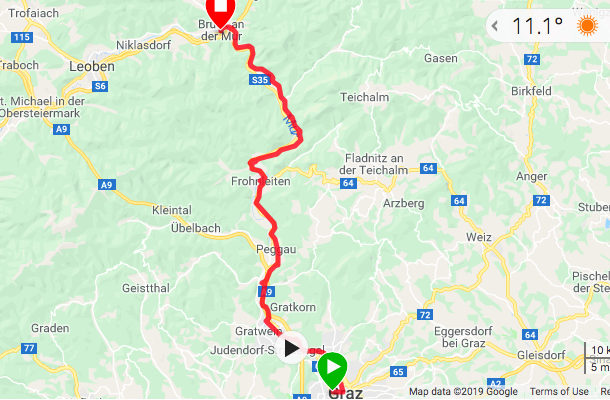