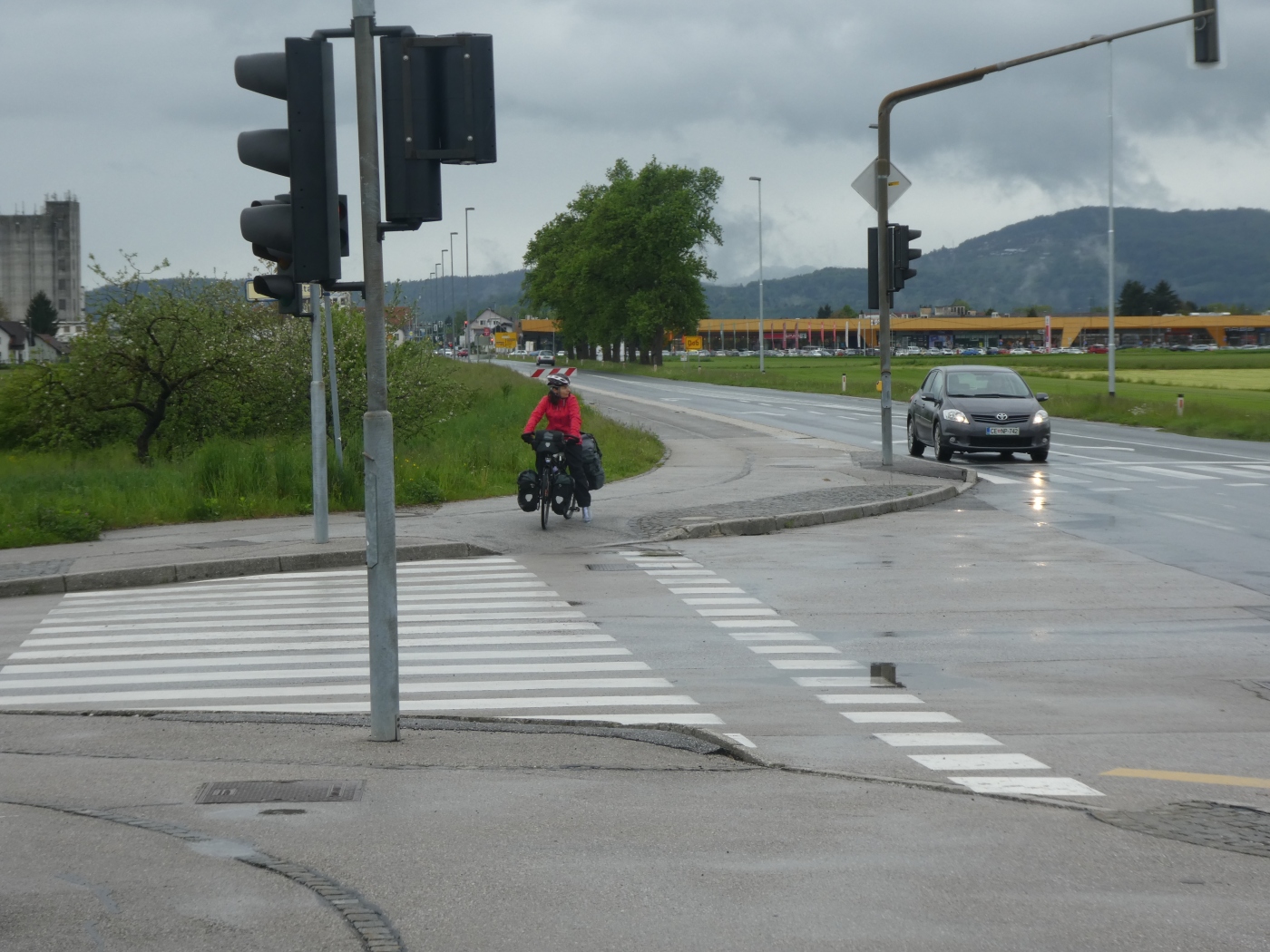 Today began like a a game of Good News, Bad News…and then it happened.

Bad News: We woke up to it still raining.

Bad news: We’d be back in traffic on a wet and hairy day.

Good News: We had a cycle path to take us out of Ljubljana.

Good News: It was Sunday so the traffic was light when we had to go onto the road.

Bad News: The road became a motorway, we definitely should not be on a four lane motorway!

Good News: There was an off-ramp to take us off the motorway. We took it!

Bad News: The off ramp took us to a dual carriageway that we still shouldn’t be on. The traffic was fast and we knew it was a road that wasn’t meant for bikes.

Good News: There was a road to take us off the dual carriageway so we could check directions.

Bad News: The directions told us the only way we could go was to get back on that dual carriageway, so we went back, riding along in the traffic and rain, with cars honking at us to tell us we shouldn’t be there. WE KNOW!

Good News: We were only on the dual carriageway for a few hundred metres when we saw a side road and could get off it.

Bad News: Now we didn’t know what to do or where to go or how to get to our destination without being on a motorway or dual carriageway.

Good News: We saw a building with an awning over its entrance where we could take shelter under the roof and check maps again.

Bad News: The awning wasn’t a solid roof, it was a louvre and the louvre was open. No shelter.

Good News: We saw a bike path that crossed over the dual carriageway and disappeared down a quiet road.

Bad News: We had no idea where the bike path would take us. “I don’t know where this route’s taking us but we’re following it!” said Steve. It’s very stressful trying to find directions when maps keep trying to put you on roads you know you shouldn’t be on. Sometimes, you just grab a more favourable alternative and and run with it…or pedal with it as the case may be. 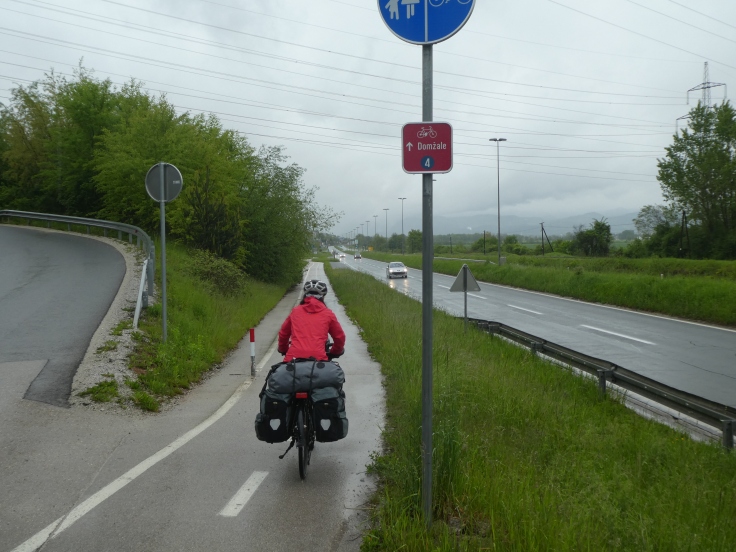 Good News: The bike path took us through a quiet little town, beside the motorway and headed in the direction we needed to go.

Bad News: The rain got heavier.

Good News: All wet weather gear was working and we were as dry as a mouthful of Sao biscuit!

Bad News: The temperature was 4.6C.

Good News: We were wearing so many layers that our panniers were half empty because most of our clothes were on us, so we stayed warm.

Bad News: We’d gone off course, so my GPS data was all haywire telling me I had metres go to the destination instead of kilometres. Messing with my head!

Good News: It was only going to be a short ride anyway, so even not knowing exactly how far to go, I knew it wouldn’t be far.

Bad News: The cycle path we were on stopped because it was incomplete and still being paved.

Good News: We could take a different road, that joined up with another cycle path.

Bad News: We weren’t sure we were going in the right direction.

Good News: We found a bus shelter, could get out of the rain and check the maps. We were going the right way!

We rode past a fire station with a group of men standing around in uniform outside.

“Dober dan,” we called as we rode past.

We rode up the street, crossed the road and waited at the traffic lights to cross over and rejoin the bike path. Then we heard voices and turned to see the men at the fire station calling us to come back. We turned around and rode back to the fire station.

“Come, come, sit,” we were greeted and one of the men took the bikes, parked them against the wall and offered us a seat at one of the tables set up inside. “Where you from?” he asked.

“Australia,” we told him.

While this was going on, one of the other men had appeared with a bottle of liqueur.

“Here, have some of this, is alcohol. Is lemon”

We laughed and accepted our glass of lemon liqueur. “Thank you!” I said, “it’s nice and warming!”

We sat in the fire station drinking lemon liqueur and talking to Primož, who told us they were setting up to have fireworks today and were waiting for a group of about sixty or seventy people to arrive from church and they would feed them before having the fireworks display. The other men came and talked to us through Primož, who translated for them.

“Beer? You want a beer?” we were asked as beer was produced. “Eat, you want some food, something to eat?”

These wonderful, cheerful, friendly, amazing men offered us food, poured us a beer to go with our lemon liqueur and we sat there, out of the rain, drinking beer and liqueur just a few hours after breakfast and laughing and chatting with the firemen. Primož asked us how we do the trip and we explained how we could take leave from our jobs and how we’d saved money for years to do it.

“You are very lucky,” he said.

“Yes,” we agreed, “we are very lucky and this is why we do it,” I swept my arms around to take in all the men and the experience we were having to explain it was moments like this that are the reasons we love to travel as much as we can. “This is a memory for ever.”

“Yes, yes, I know, “ he said, “for life. We are so glad you went by, this is very unusual, we so glad you came back to us. Here we don’t see this, it’s wonderful you stop. We so glad. We see you go by and we think, we must have them come back!”

One of the other men came up to us again. “You want anything else? Another beer?”

“Thank you, but this is all perfect. We better not have another one or we will swerve on the bikes!” Laughs all round at that. Then one of the men came back and put a bottle of iced tea in my hand anyway. I mean, these were the most wonderful, salt of the earth people. Just an indescribably amazing experience.

I stood with them for a photo and Primož hugged me and said, “Come here, come here my little Tasmanian friend.” It just couldn’t get much better than that moment.

The people from church began to arrive so we said thank you many times again and got ready to leave so as not to take up table space from the people who were actually to be fed.

“Go safely my Tasmanian friends,” Primož said as we departed. He was amazed at the gear we were carrying and how we could do it for so long and carry everything up hill. We had spent time just talking and laughing with these men and had such a wonderful time.

We pedalled off down the road.

“That was pretty bloody special,” I said to Steve.

“Just brilliant, amazing,” I said, stuck for the right words to describe how it had been in that shed, surrounded by wonderful, smiling, laughing people who kept thrusting warmth and hospitality upon us. Those experiences are the absolute gold moments of travel – the unplanned, unexpected, unforeseen moments when you get to meet the best of people.

After that, the game of Good News, Bad News stopped because anything hard after that, even the 14% hill, just didn’t matter because I was riding on smiles! The rain even eased off and we could take in our surroundings, which were nice to see, despite the wet and the roads.

We arrived in the tiny village of Lukovica pri Domžalah where there was one guest house. We were early to check in but the lovely man welcomed us anyway and gave us a room early so we could get out of the weather. 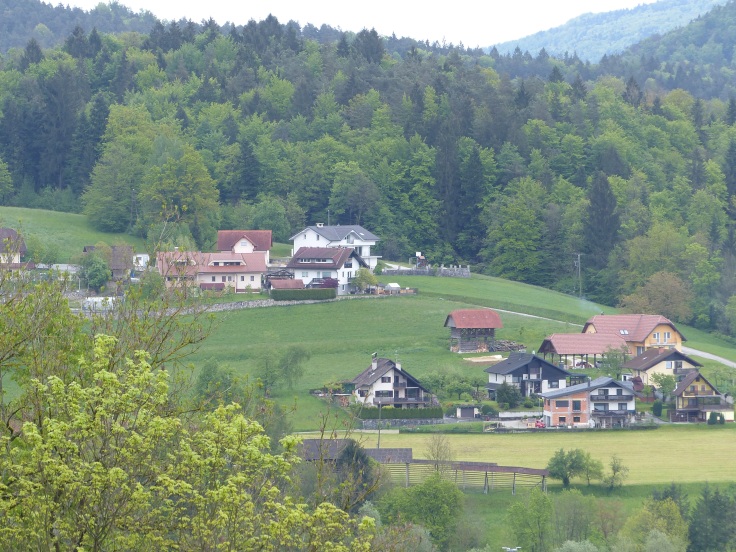 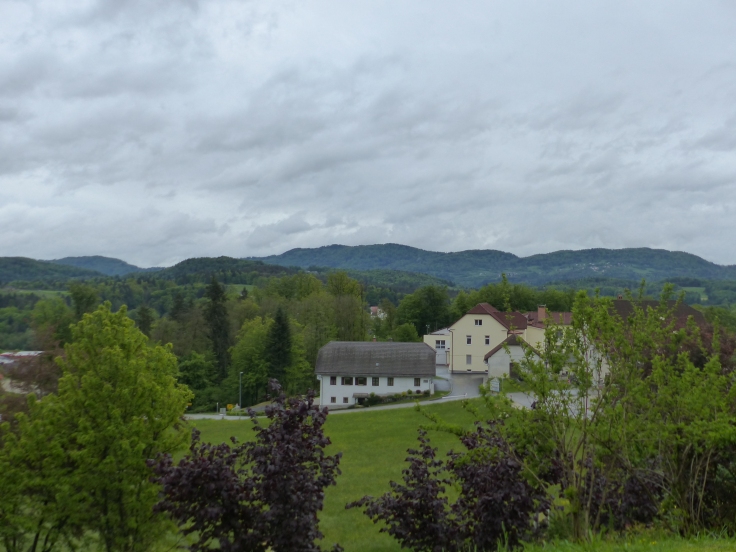 We kept the ride short because of weather and to ease Steve’s knee back into riding and despite some difficulties early on, it ended on a high. Steve did an amazing job of rerouting us and getting us to the end, off motorways and onto bike paths. He was only winging it, but his flying by the seat of his pants style of navigation flew us perfectly.

Good news: We made it!

Good news: We stayed pretty dry and not too cold

Good news: Laughs and conversation with Primož and a warm, welcoming, friendly group of firemen.

It doesn’t get much better than that!

Time in the saddle: 2 hours and 1 minute

Actual time to destination (due to wrong turns, stops and then that wonderful stop over with the firemen) – 3 hours 36 minutes

4 thoughts on “Good News, Bad News…And Then Something Happened”