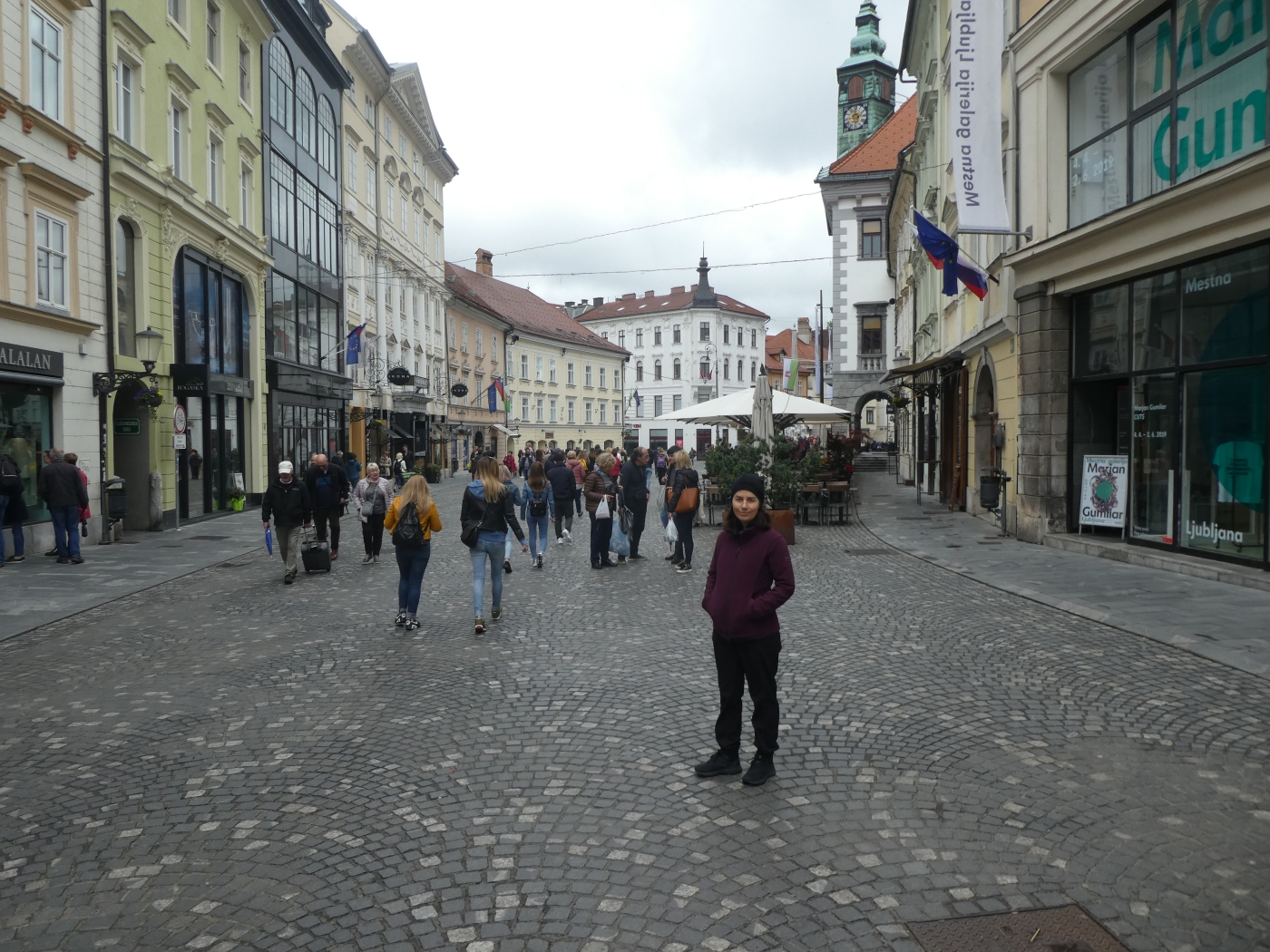 It rained…again. Full, pouring, stinging the face type rain and we pedalled out in it. We had errands to run, like that trip to Decathlon to find a replacement spork amongst a few other bits and pieces that we needed, so we slicked up in our wet weather gear and set off onto the bike paths and headed for our destination.

We pedalled fast with the wet getting wetter but the bonus was…puddles! Going down the gutter and up the gutter on the other side of the road were the places that collected rain ponds as nice big puddles just waiting for me to swoosh through, feet in the air, no doubt looking like a complete plonker but not caring a fig about that. It was raining and it was cold (11C) and I was wet, so…I had to make my own fun. So I did! After Decathlon we called into a supermarket and this one was a hypermarket – HUGE like an aircraft hangar. It takes us ages in the supermarket on a good day because we try and find things and I try and read labels in a language I don’t understand and do my best to decipher it to make sure of what’s in things. Added to that the sheer size of this place and it was a task indeed. At one point I actually rang Steve on his phone to find out which aisle he was in because I couldn’t find him. I love shopping in supermarkets in other countries because I love seeing what’s eaten and what’s different and what I can learn, but it does take us AGES! The errands were finally run, we gathered the things we needed and pedalled and swished and wooshed back to the warmth and dry of our little apartment to wait for a possible break in the weather.

As we waited, I pondered on some of the things I’ve observed, some of them curious and some of them just great. These are some things I’ve noticed…I’m loving what I see with the men here. Now…I know nothing about the gender politics over here, so I’m going purely on observation, but I love that so many things I see just bust the typical male stereotype, particularly the stereotype of the typical Aussie bloke. I’ve mentioned men and their little dogs, well that’s everywhere. I see couples and families and men on their own, happily walking along with little fluffy toy dogs, no need to be seen with a big “bloke dog”, when I see families, it’s the dad that has the little dog on the lead and it’s great. It’s not just a fella here and there, it’s men everywhere and everywhere we’ve been so far. Yes, there’s still men with bigger dogs, but there’s many more with little tiny ones, which is terrific I think.

The other thing is men and their bikes…here men ride “girls bikes” quite happily. As in, bikes with the lowered central bar that are usually designed for women and girls, well here, men and women ride them and pastel colours seem to be the go. Men ride around on pastel green “female bikes” because bikes are a mode of transport and you just get on the bike and ride, no ego, no having to prove anything with a “blokes bike” – just get on any old bike and ride it. Another great! Then there’s the umbrellas – men carry umbrellas of any design and colour. I watched a young couple walking in front of us yesterday and she had a green patterned umbrella and he had a purple floral umbrella. The umbrella is a practical item, it keeps out the rain, so who cares what it looks like. Again…no ego, no needing the things that are used to somehow confirm masculinity. It’s just not a factor, no ego! A floral umbrella does the job just as well as a “male colour or design” so just use it. Then, I loved watching a dad in the park the other day, doing cartwheels with his young daughter. She was giving instructions and he was cartwheeling around the place with varying degrees of coordination with legs flailing around. She would either shake her hands to say he was getting it wrong or applaud when he did a fabulous cartwheel. He was cartwheeling with abandon with his little daughter, not a care in the world. At home, I tend to think fellas would have some concern about what they looked like or who might see…what would their mates think!!?? Here, no such thing. No ego. I also saw a man in a street here who had set himself up with a sewing business and was sewing custom personal statements on aprons. People would give their name and he would stitch the name and phrase onto the apron as a souvenir. Now again, at home, seeing a fella sewing even in the privacy of his own home can still be something of a rarity, but to set himself up in a little business doing it publicly, well we just don’t see that. Here, it’s just done and he was doing a roaring trade.

Now I know I’m generalising terribly and of course there are fellas at home that would do all the things I’ve observed here, but it’s not common as it is here. There just seems in Australia to be much more concern with being seen to look and act like “a man”, to “be a bloke” and there’s ego and concerns about what things would look like and what would people think, that’s attached to behaviour. I love that what I’ve seen over here totally bucks that stereotype. Fellas seem to be a whole lot more secure in themselves and don’t seem to need to broadcast masculinity in the form of a “masculine looking dog / bike / car / umbrella / …[insert whatever item here]”. I’m sure at home, fellas walking little dogs or holding floral umbrellas would be on the receiving end of judgements or insinuations. I love that what I see here is a sense of security and confidence in who the people are, with no need for pretence, ego or a need to somehow prove something. Again…huge sweeping generalisations I know and I’m only going on my own observations, and maybe I’m being unfair or just plain wrong, but what I see is very different to what I see at home and what I see is fantastic!

Ljubljana has officially become my favourite place so far. It’s a lovely city, beautiful and eclectic. It’s also very green and eco conscious. There are a lot of electric cars, all the public rubbish bins and segmented for general waste and recycling, there’s a charge for plastic bags, like there is at home and people walk around with their own reusable cloth bags and there are bike share stations all around the city, so you can hop on a bike, ride it and drop it off at one of the other hire stations around the city. A lot of cities have those bike hire stations and we have them in Australia, but Ljubljana has gone one further…they have car share too! Yep, if you don’t want to hire a car for a day, but just need a car for increments of minutes or hours, you can pick up an electric car at one of the car sharing stations, drive it and then drop it off at one of the other car sharing stations. Brilliant. So you can hop on a bike and ride safely around on the network of cycle paths and if you happen to need a car for a while, simply hire an electric one for a short time and then drop it off again! Just another great way of reducing the amount of traffic and emissions on the roads by having alternatives around. Yet another great!

The other thing I love seeing, and it’s not just here, and we saw it on our last trip too, is people’s creative parking skills. Parking spots are a bit of a premium, so when a driver sees a space, however small, they put their car in there somehow. We have seen cars lining streets and if there’s a small gap between the front bumper of one car and the back bumper of the car in front, someone will squeeze in that spot nose first. We’ve also seen a lot of cars parked absolutely bumper to bumper and I have no idea how a car is going to get out again, but somehow it’s done. Very creative parking and supreme parking skills.

Speaking of supreme skills, I also love seeing people riding their bikes in the rain carrying umbrellas. People pedal along, one hand on the handlebars and one hand holding an umbrella. It’s so dignified and also a display of excellent balance. I could do with some of that!

After some sitting and pondering, the rain had eased so we set out for a final short roam through the streets, with Steve’s pesky knee still giving a twinge, so we kept it sedate. We strolled along the cobbles and had a final look at some of the lovely streets and buildings and the river. 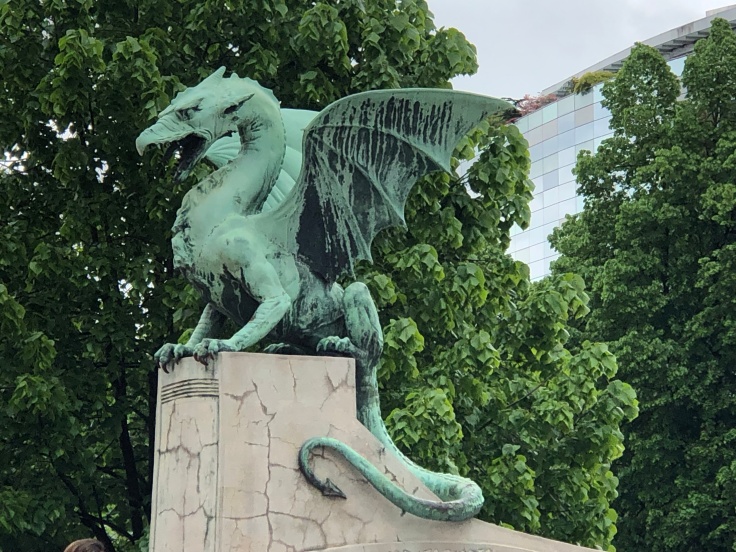 We passed another busker who was a bit different. This man was playing sax with his little dog perched in the case and howling. The man was playing something slow and melodic, as if he was serenading the little dog and the little dog would raise her head and “sing” with a long howl. I have to say though, that little dog looked like she’d rather be somewhere else. The ears were back and she looked at the crowd as if she really didn’t like being the centre of attention. I’m not a fan of performing animals in any form and I don’t think she looked completely happy to be there. The man finished playing, took a bow and applauded his little dog. She hopped up and walked around a bit, then went back to her spot sitting in the case, so obviously trained to perch herself there. He was making an absolute killing because a lot of people were putting money in the case just to give the little dog a pat.

It was a nice final roam, through a city that I’ve loved spending time in. We are on day two of our three day cycle of rain that we tend to get, so we’ll see what tomorrow brings. Will the cycle continue or will it be broken? Cycle or not, we shall cycle on ourselves, either into the wet or not. Maybe just a short ride, so we can make some forward progress without taxing Steve’s knee too much, but one way or another we shall pedal on. Even if it does rain, maybe there’ll be puddles. Gotta love a puddle! Power to the pedal…power through the puddles. Great!

Time in the saddle: 43 minutes

Time spent in supermarket for the gain of a dozen items: 90 minutes!