It seemed the travel gremlins decided to ignore us for a change today and our plans pretty much went to plan. We packed up early in Perpignan and cycled to the train station to take the short trip up to Narbonne. The wind had not let up and even the short ride to the station wasn’t an easy one. As we cycled along, we passed a woman walking along the footpath pulling a suitcase and as Steve went past her, she smiled and gave a thumbs up, then I came along and went past her and she did the same thing – big smile and thumbs up. I’m not sure if the gesture was encouraging us for riding the bikes with all the gear, generally speaking, or if it was for doing what we were doing in the awful wind. Whatever her intent, it was very nice of her to give us that encouragement!

We arrived, bought our tickets and waited beside the departure screens to see which platform we needed to head to. There were six platform A – F and we waited to see which letter would appear on the screen. Steve went outside to have a look at a train pull up and it seemed there would be fairly easy access to get the bikes on board, which was reassuring. We’d also seen elevators to the platforms and one platform was right outside, with easy access, so things were looking good. Finally our letter came up…Platform B. Off we went and found the sign to direct us…hmmmm…there was an escalator coming up, but no escalator going down to Platform B, only a long flight of stairs. That can’t be right, there has to at least be disabled access. We quickly walked around and found the elevator to platforms C-F, but no B. We went back to the escalator and stairs. Oh well, this has to be it, there’s nothing else to do but take those loaded bikes down that long flight of stairs. Steve went first, which was good, because then at least he might break my bike’s fall a bit if I couldn’t hold it! Again, I struggled to hold it and a couple coming behind me held on to the back for me, which was really nice of them. We got the bikes down and then saw that our platform was now up another flight of steep steps. How can that be? There must be some sort of access. What would someone in a wheelchair do? We quickly walked around again, looking for another way and again found there was no other option, we would have to push the bikes up those steep steps. Steve went first again and this time he struggled to get the bike up, so I parked mine and went behind and pushed and shoved his bike while he pulled and we eventually got it up to the platform. I raced back down to my bike and between the two of us, the smaller one got up the steps a little easier. Phew! Made it! We were on Platform B! We still can’t believe there was either elevator or escalator access to every platform except ours! The train pulled up and we glued our eyes to the side as it cruised past us, quickly taking in the information and symbols on the side, with all the skills of a champion speed reader. There it is! We saw it! The little bike icon, right there on carriage three, the symbol that tells us that carriage has bike access, so a lower step off the platform and bike storage on board. Politely waiting for other passengers, but also wanting to speedily get on and get that bike space, we gently nudged forward, wheeled the bikes on and got a little space to lean them for the half hour trip up to Narbonne. Success! We were on!

It was actually quite nice standing there with the bike, beside the window, looking at the scenery go by. It was a nice quiet, smooth train and the journey was uneventful and quite scenic. Our station at Narbonne soon arrived and we held on to our bikes, so as to get them off as quickly as we could, so I wouldn’t accidentally end up continuing on to Avignon unaccompanied! Success again! We got off! The plan had gone to plan and we had successfully made the train trip to Narbonne, with both of us arriving together, on a train that was running (and on perfect time) and got the bikes on and off too. When we walked out of the train station, what do you think greeted us? What do you think…” HOOOOOWWWWLLLL….WHOOOOOSSSSHHH….BLLLOOOOOOWWWW…The wind was, if anything, even stronger, it was whipping things around and blowing with incredible force. Still, we thought we’d try to do a bit of a ride around the city to take a look at things before heading to the hotel, so off we went. I was soon back to the familiar and unnerving situation though, of being pushed around by the wind and found myself swerving into the road and trying and failing to keep the bike steady in the howling gale.

“I’m going on the footpath!” I shouted to Steve, “can we get off the road!?” I decided I’d rather get a few dirty looks from pedestrians, than get hit by a car, so we became pedestrians on wheels, just for safety’s sake. We called into a supermarket to grab some elevenses and then looked for somewhere out of the wind to sit.

There wasn’t actually anywhere out of the wind, but we found a small plaza, with a historic church, that gave a little bit of shelter and it was a nice spot, so we sat down there. This is where one of our plans, didn’t quite work out, but it wasn’t a big plan, so it was OK. Today was our 18th wedding anniversary. We had planned to have a nice picnic lunch in Narbonne to mark the occasion and sit in a park or a plaza and just have a nice anniversary picnic, but the horrible wind put paid to that. It was too uncomfortable, unpleasant and cold to be able to go through with those plans, so a quick sit and a snack for elevenses outside that church became our “Anniversary Elevenses” instead. Oh well, maybe we can have a hotel room picnic instead and toast our wedding anniversary. 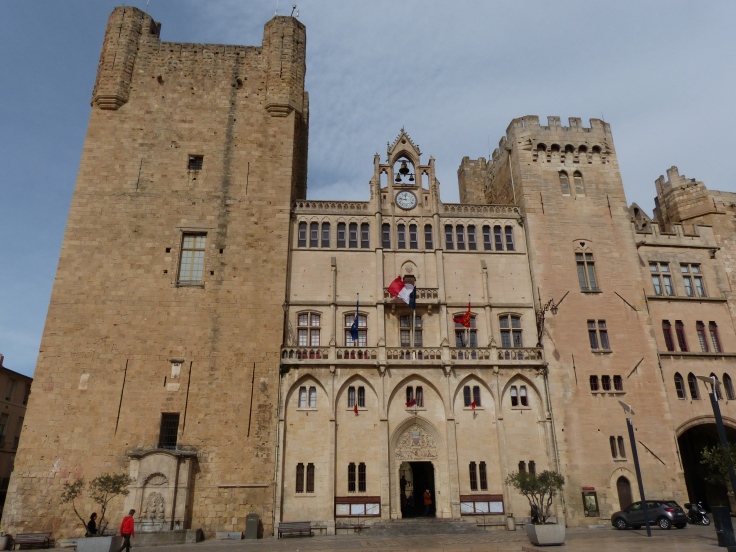 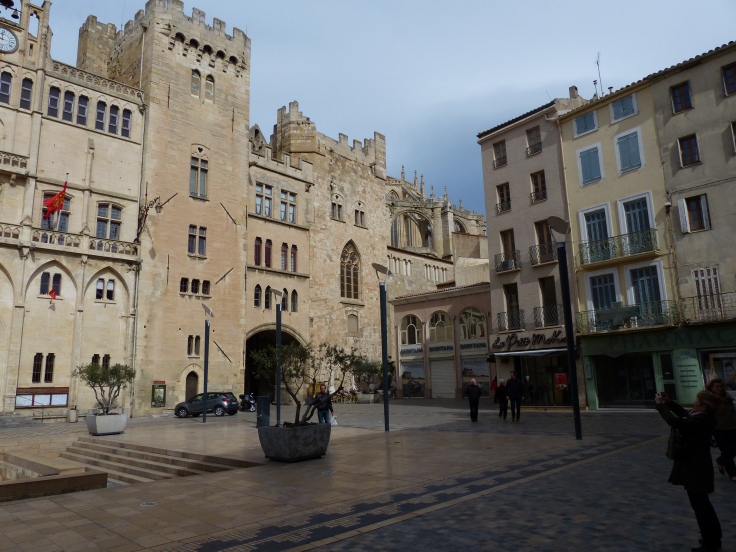 We set off for the hotel, partly on the footpath and then, thankfully, on a cycle path, so at least we were out of traffic. We found the place, about 3km from the city,  without any trouble and it’s very basic and cheap and cheerful, but does the job. Now, should we unload the bikes and ride back into the city to have a look around and grab something for our indoor picnic and for supper? We looked at the wind and the horizontal trees and decided to walk instead. We thought two feet might have a better chance of bracing against the wind than two wheels. So off we went in the howling gale, to walk back into the city. This is where the second plan didn’t go to plan, but again, it was only a little plan so it didn’t matter too much. We soon discovered that here, as was the case in Spain and Portugal, everything closes on Sunday. So we walked around and around and no supermarkets were left open, everything was closed! We’ve been caught like this before, but weren’t sure if it would be the same in France and…yes it is! So we did a bit of roaming around the historic areas of the city and then walked back to the hotel. So our planned anniversary picnic lunch became sitting in a very small and cramped hotel room, shared with two bikes and all the gear, with Steve chomping on a left over bread roll and honey and me crunching on some rice cakes and peanut butter. Then, for our anniversary supper, we had to dig into our emergency just-add-water meals that we keep as back-up for just such occasions as this when we can’t get supplies. So Steve chowed down on his packet pasta meal and I had my cup-a-soup and that’s how we marked the occasion! Oh well, I reckon we’ll always remember this one! At least the big plans went to plan…we got on the train, with the bikes and we got off OK and we arrived in Narbonne, that was the important thing.

So the wind spoiled things a bit today too, but at least we got where we needed to go without having to ride in it for too long. Tomorrow will be another story, because it’s supposed to be just as windy and we have to ride on. I’m not looking forward to it…at all! I might have to pad up and prepare for the wobbles, swerves and crashes if it decides to push and shove me around again…but with my bike’s help, we shall try to avoid ditches, gutters, cars and the road crashing up towards us…wish us luck!

2 thoughts on “Pretty Much to Plan!”