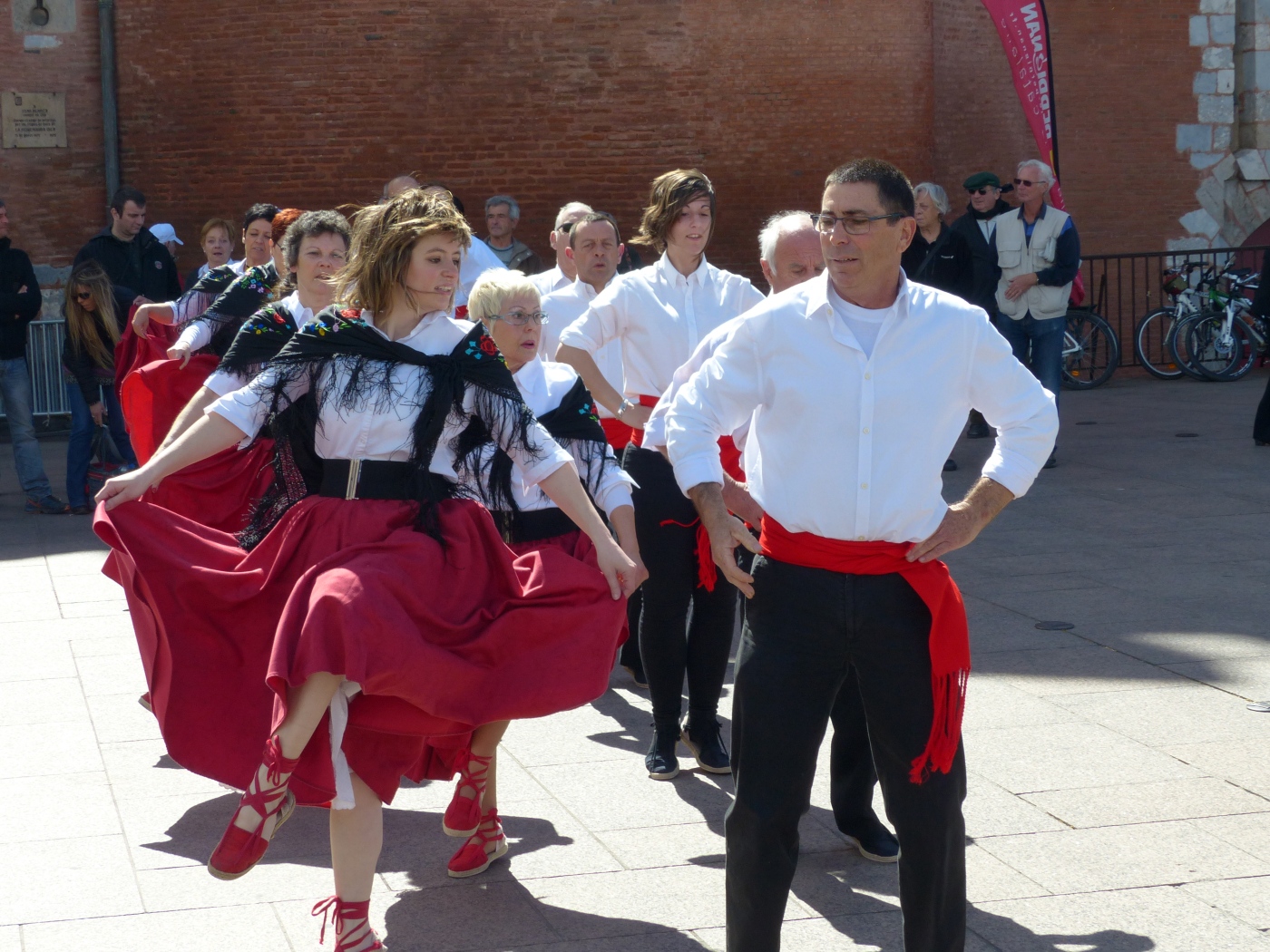 Today was a really nice day. A relaxing, roaming day. With continuing high winds, we decided to spend the day in Perpignan and have a look around. We have immediately noticed the change in “vibe”, pace and general atmosphere here in France, compared to Spain. Things so far, feel a little quieter, a little less speedy and with interesting things to see, nice scenery and interesting roaming spots.

We began by venturing out to get Steve some breakfast and headed up to a nearby small supermarket. Winner! The Pain au Chocolat pastries and the croissants were fresh from the oven in all their flaky glory, so a bag was soon filled, with a litre of orange juice as an accompaniment. We went to the small register to pay and the friendly lady smiled to us and put the items through. Everything came to 6.29, so I went digging through all my change, so I could give her the right amount. She began saying something in French and gesturing to my wallet and pointing to herself and saying “Change”, so it seemed she was happy to liberate me of my weighty collection of coins. She reached into my wallet and balled up her fist, to grab an entire handful of coins, then proceeded to empty every last copper from my wallet, spilled them onto the counter and began counting. With every 50c she reached, counting my collection of 1c, 2c and 5c pieces, she would place a 50c coin in front of me. She then took what was needed to pay for our items and I left with a cleaned out wallet, not a copper coin remaining, thankful for the reduction in weight and bulk. With multiple repetitions of “Merci” from myself and Steve, we left and headed back to our room. This little outing had a dual purpose, one was to get Steve some breakfast, the other was to be out early to get a sense of the wind and weather. If it was OK, we’d ride on, if it was like yesterday, we’d stay. Well, the wind was blowing, blowing, blowing! The trees were whipping this way and that, so we asked ourselves the question again. Do we ride on and do a short ride in the wind or do we stay?

“OK,” I said. Doing a shorter ride would have been OK and I was surprised that I didn’t feel as sore as I was expecting to after yesterday, but Perpignan is a fairly big place with things to do and see, so a day here seemed a good idea.

We wandered into the town centre and came across an event that was going on. Steve had seen a sign with a runner on it and immediately drew my attention, in case there was a run going on that I could join. It didn’t seem to be that sort of event and there were also a number of people in cycling gear too and some health based information stalls set up like a mini expo. We stopped for a look and the the dancing began. This was so much fun to watch! It was a group of Catalan dancers in traditional dress, performing a number of group dances, while also being blown and buffeted around by the wind. The dancing looked a bit like a cross between Irish and Morris dancing and the men and women leg kicked and twirled and foot-flicked in time to the very toe-tapping and energetic music. It was just fantastic and it was so nice to stand there in the sun and watch and even the wind couldn’t dampen the enjoyment. It was great and I applauded enthusiastically. 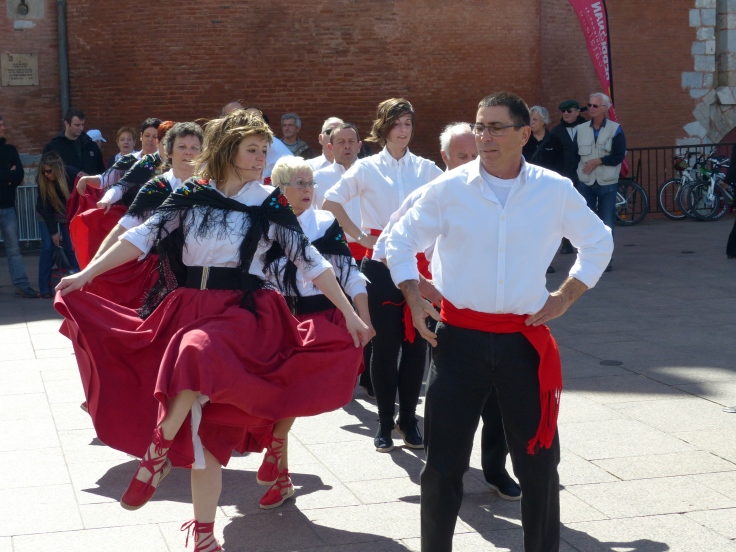 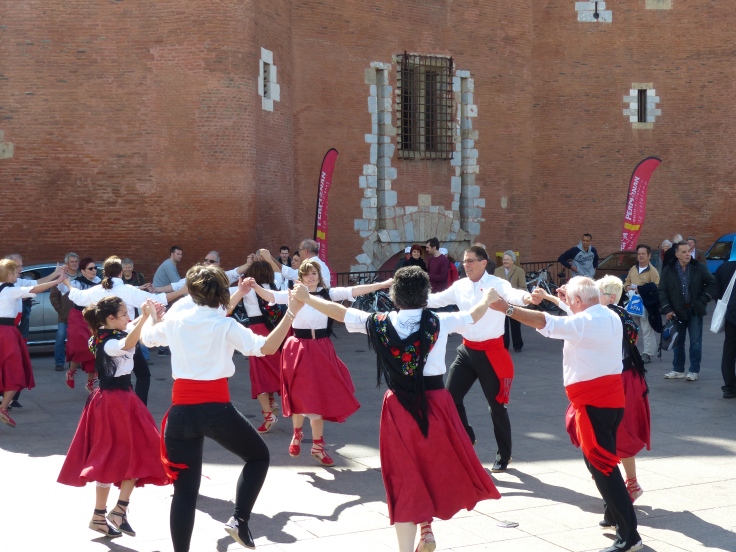 We wandered into the historic quarter and just sat down for a while to have a snack and enjoy the sunshine and take in our surroundings. I love doing that – just having time to sit and watch the locals and get a sense of a place.

We spent some time wandering the back streets and reading the signs with information about various historic buildings, went into a 16th century church for a look, strolled through the urban cemetery, from a similar period of history and generally just had a relaxing stroll. 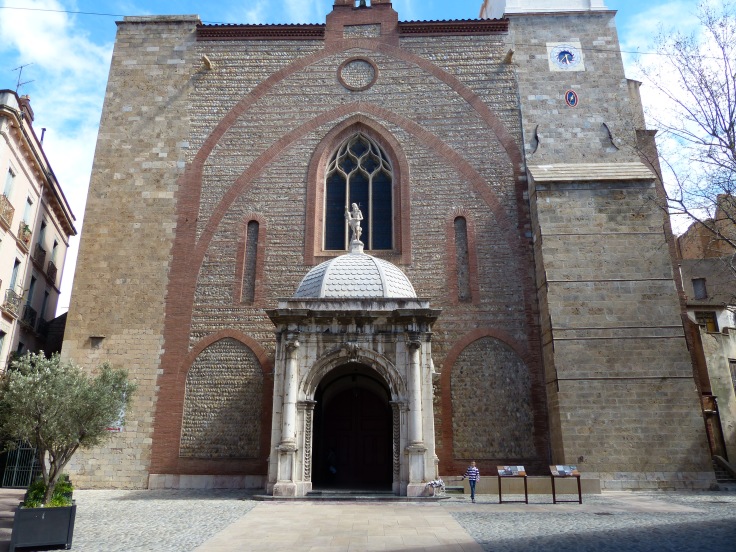 There is also a really nice canal through the city, so we wandered along the path above that and continued to enjoy the sunny strolling.

We sat on a bench beside the canal, had some lunch, fed the pigeons and watched all the British people walk past in animated conversation. The Leeds Rhinos rugby team was playing, so the city was teeming with Leeds supporters in all their club colours and there were Yorkshire accents to be heard everywhere.

So far the French people we have encountered in shops and the hotel, have all spoken English, which is great, but makes it difficult to practise our French, because when presented with our English comfort zone, we obviously speak English back. We’ve been practising some phrases though and I’m determined to remember some of my high-school French and give it a go, especially since we’ll be in France for about the next six weeks. It’s also a bit easier to read signs and information here, because the language is easier to figure out, given that English has borrowed so many words from French anyway. We went to a supermarket to get something for supper and I had the opportunity to use a bit of the language, as well as having no idea what was being said to me. I was standing at the fridge section, looking at the veg and a lady standing down the aisle from me seemed to be trying to get my attention. I walked up to her and she said, “something something something something Filet Mignon” and pointed to a packaged meal on the top shelf. Well, I could see Filet Mignon written on the pack, so I figured she was asking me to reach it down for her, either that or she was just looking for someone to have a conversation with about the price, taste or artistic merits of the packaging on a random refrigerated meal. I opted for the first possibility and reached up and took the packet and handed it to her. She spoke to me with a long list of French words, to which I quickly responded, “Desole. Je ne parle pas Francais,” (Sorry, I don’t speak French). She then said, “Merci,” which I could understand and walked off with her Filet Mignon. I was stoked for two reasons. She walked off with the meal – this meant that she had obviously wanted it, so I must have got that bit right. The second reason I was so pleased, was that she had asked me…ME…the statuesque five-foot tall ME, to reach something down from the TOP shelf! How flattered was I! I am never, never asked to reach something, because generally I’m incapable of reaching the top shelf of anything and it’s usually me that’s asking for that help. So, to be asked to reach up and pass something to her from the top of the fridge, well, I think I grew an extra foot in pride! I, the short person, had been seen by a stranger as being capable of helping with a tall-person’s task. So I got to practise a bit of the language and I got to help with something that I am never asked to help with, ever. Stoked!

So today, was a nice, fun, relaxing day, even in the wind. The high winds are predicted for at least another week, so we’ve been discussing our future travel plans. We know we can’t avoid the weather and we’re just going to have to ride in it sometime, it’s just a matter of when and how far. While we were doing our research, Steve stumbled across a website that is exactly what we need. It gives a suggested route from Narbonne (just north of Perpignan) all the way through to Bordeaux, following the canal. It gives stages, suggested stop overs, rates the stages for cycling according to difficulty, shows elevation and even has the GPS directions to be downloaded. It has every bit of information we need and is set up for cyclists. The stages are also a bit shorter than the rides we’ve done so far, so that should give us extra time for some sightseeing and not feeling rushed. For the next week or so, some shorter rides will make coping with the wind a little easier too. So we plan to take the train tomorrow up to Narbonne, which is just a short trip, have some time to explore that place and then begin following the suggested cycle routes west towards Bordeaux, before we head North to Normandy. Hopefully the trains will be running!

After a really tough day yesterday, today was lovely. Slow paced, nice and interesting things to see and learn, interesting people to watch, nice friendly people to engage with. A welcome recovery from a very difficult ride. So tomorrow we’ll have another go at riding a train in France and hope things go to plan, so we can arrive early enough to be able to ditch our bags and then take the bikes for a gentle, sightseeing ride to explore the city and surrounds of Narbonne.

Did you hear that travel gremlins!? Go away! We don’t need you, you’ve had your fun! Go and pick on someone else! We want this little plan to go to plan, thank you very much!

4 thoughts on “A Pause in Perpignan”