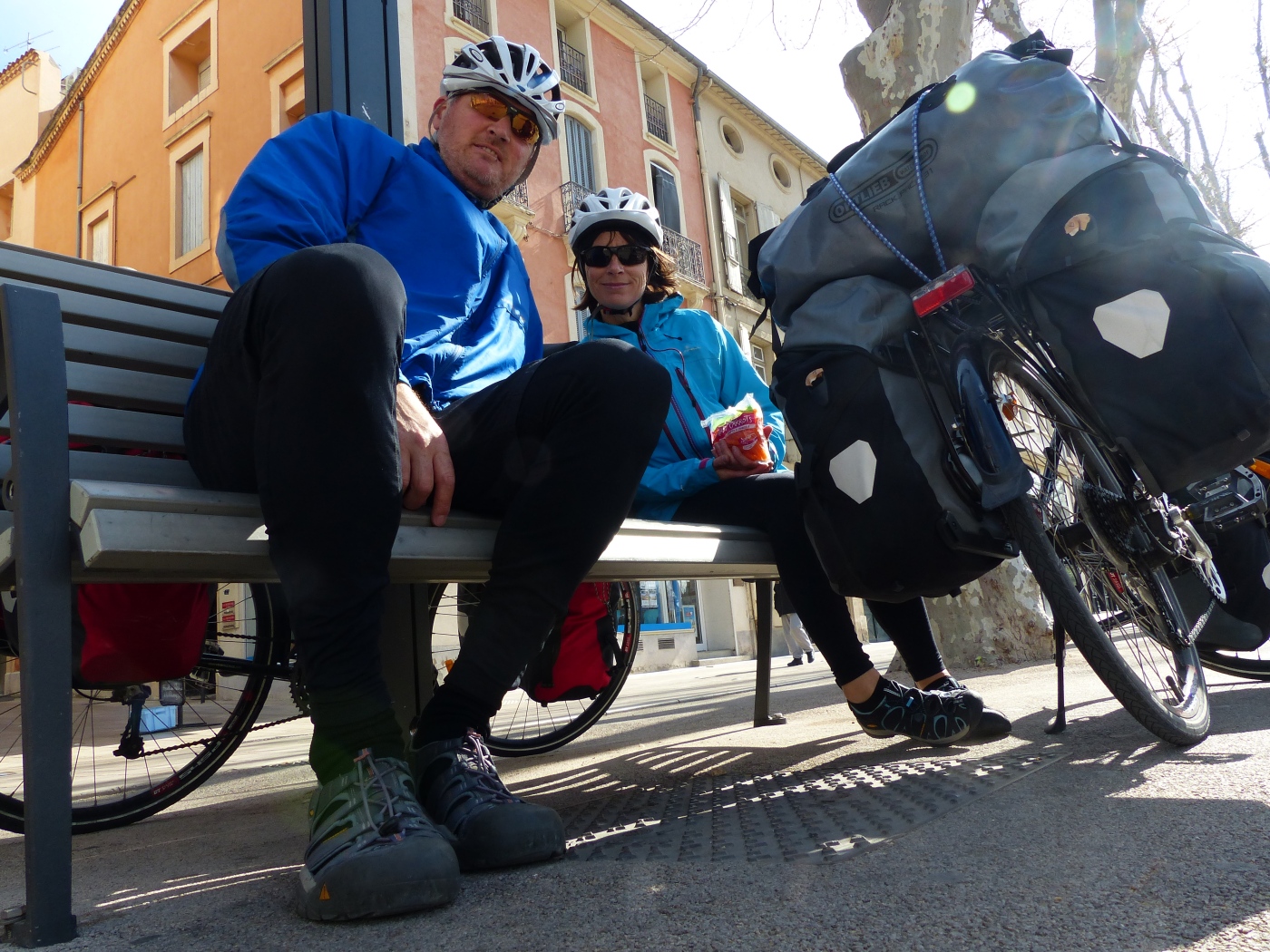 All I could hear when I woke up this morning in Narbonne, was the howling wind. It was rattling parts of the hotel, banging and knocking things over outside and roaring through the trees. It was already blowing at 55km/h. I have to say, I woke with a teeny tiny sense of trepidation, dread and worry. Here we go again. Steve investigated a Plan B which had us staying in Narbonne and sitting it out if the wind was going to be a problem, thinking of sparing me the scary ride. “No”, I said, “we have to ride in it sometime, we can’t keep staying in hotels for days on end.” So we decided to ride our planned stage of the Canal du Midi and head for Le Somail, despite the wind.

We headed over to the nearby jumbo supermarket to grab some supplies, knowing the villages we would be in for the next few days were going to be very small, without a vast array of places to stock up on things. It was at the big supermarket that I practised a bit more of my French. I’d grabbed some fruit and veg and a couple of “heat and eat” meals and went looking for gluten free bread. I couldn’t find it anywhere, but I knew this particular chain stocked it. I was going to forget about it and then decided to just brave up and attempt a conversation with a member of staff. There was a woman stocking shelves beside me, so I gave it a go…

“Oui, something something [pointing] boulangerie” she directed.

OK, I figured it must be over in the fresh bakery section. Then she walked down the aisle and gestured for me to follow and pointed across the store and I could see, past the fresh bread, the gluten free section.

So I had plucked up the courage to ask for what I needed and not a word of English passed between us and we both figured out what each other was saying! T’riffic!

Just on the whole gluten free thing, which is a situation I’ve found myself in for some inexplicable reason, because as I’ve mentioned before, normal bread has decided,out of the blue, to give me a tight throat, tingling lips, running nose and eyes, muscle aches and feeling unwell. I’ve had some bread over here from bakeries and been fine. Then I’ve eaten supermarket bread and felt ill. So I stick to the gluten free stuff a bit to let the system recover before I try normal bread again (since I love my bread, I want to eat the good stuff as often as I can!). So I’m finding it interesting how some things will cause a reaction and other things not. I actually had a veggie burger in Barcelona and that gave me the full-on “gluten attack”. I knew it had wheat in it but decided to try it anyway, and man did I feel ill afterwards, I had the full smorgasbord of symptoms from that little burger. So I’m still at a loss as to what’s going on…but I’m just mentioning this because of something later in the day!

So we had stocked up our supplies and were ready to hit the road. We were following a route along the canal, which would take us on bike paths and some roads. The wind was as bad as ever, really fierce and howling and making the going tough when it was a full-force head wind. Riding beside a canal just added another wind generated swerving hazard and we were both a bit worried about ending up in the drink at times! I was leaning way over, into the wind as I was riding, to brace against it and stop it pushing me into the water! We also had to ride some of the way on roads and I had an incident, which I won’t go into, other than to say it involved a very fierce cross-wind, the wind gush from a bus and a following car and it was a very close call. It really gave me a fright and I’ll leave it at that.

We rode through a little village and stopped to add a layer of clothes and some gloves because apart from the wind…it had now started raining! On we ploughed in the gale and the rain, although it wasn’t big rain and the wind was blowing so much that the rain didn’t really have much of a chance to land on us anyway, so we didn’t really get wet. So…except for the wind and the rain, it was actually a lovely ride! We followed the canal, we rode along quiet country roads with farmland and vineyards beside us, we rode through small villages, we saw the locks working, we saw a canal bridge and it was, I have to say, simply delightful (apart from the weather!). 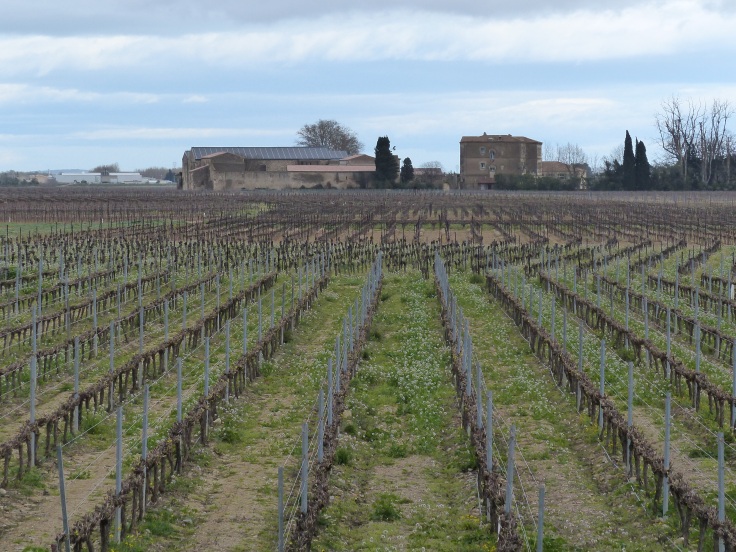 We were not to be deterred from having a proper touring ride, so we even stopped for lunch in the wind. We found a spot beside the canal, near a bridge that gave us a bit of shelter and sat and watched a boat come through the lock. “Just imagine how idyllic this would be if it was warm and sunny and calm,” I commented to Steve. It was like that. Sitting beside a stone bridge, beside the canal, farmland around us and watching people open and close the lock, so they could peacefully motor through and journey up river. It was just lovely, despite the wind and rain making things a tad uncomfortable.

A few short kilometres later, we rode into the small village of Le Somail, that was to be our pit stop for the day. It’s a tiny little village, that’s an obvious stopping point for the canal boats, but there’s no real town to speak of, it’s very small and utterly delightful. We’d booked a B&B to stay in, which caters for cyclists and rode around the village looking for it. We rode over a steep stone bridge to cross the river and were given a rousing gesture of encouragement from a lady walking over it, before finding our home for the night on the other side. We were greeted at the door by the owner, who took us inside, stowed our bikes in the hall way, took us into the kitchen and offered us a drink of Grenadine and Syrup de Menthe. I went for the Grenadine and Steve had the mint and we sorted out the details. It’s a big, very old and beautiful house and we were told to make ourselves at home and ask if there was anything we needed. After a short rest, we headed off to explore the village. 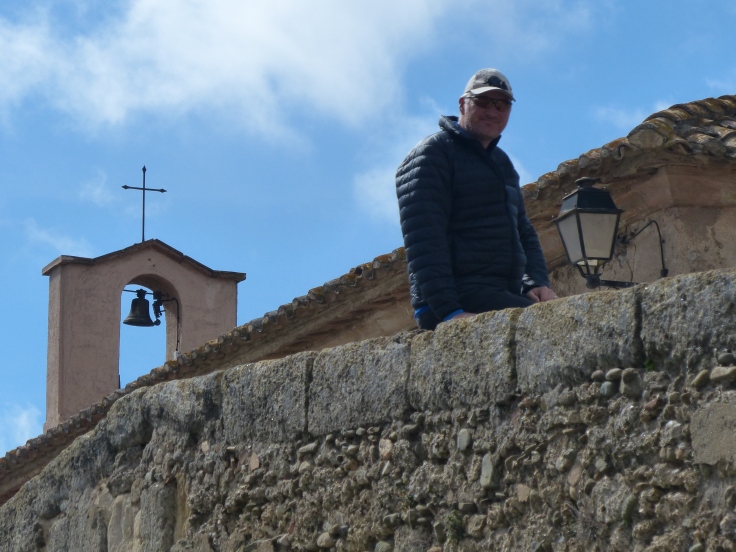 We strolled around in the wind and circumnavigated the surrounds pretty quickly, looking at the lovely old buildings and the new houses also being built. We then went to the only shop in the village, which was on one of the canal boats and stocked a few drinks and gourmet items from local producers. We weren’t quite sure what the cooking situation was going to be at the B&B and the boat shop had one last, big rustic and crusty looking loaf of bread, so I suggested Steve grab that as a back up. We strolled on and sat at a picnic table, still in the wind but at least also in the sun and I thought we might as well try that scrummy looking bread. So we tore off chunks and ate it there and then and I felt perfectly fine, so I think I polished off nearly half the loaf. It was deeelish! So it seems I can cope with bakery bread OK here, just not the factory produced stuff, but I’m stoked with that, if it means I can have the occasional scrumptious warm and crusty loaf of real bread! See…the simple things are the best!

We ended up asking our lovely hosts if we could use the kitchen, which they had offered to us and we heated up something to eat and got chatting to them. It turns out they only arrived at the house themselves yesterday and our last minute email asking for a room, was their first booking. They are from Belgium, also both teachers and spend six months of the year here in Le Somail running the B&B and then go back to Belgium for the rest of the year. They said it’s a good lifestyle because they really only work in the morning, to give guests breakfast and clean rooms and then the rest of the day is their own to spend in the restaurants or relax. Sounds like a winner to me! They are lovely people, welcomed us to their home, offered their warm lounge room for us to sit in and watch TV and to ask for anything we may need. Lovely people.

So our ride today was a mere 24km, which made the weather conditions a little more bearable and meant we had some time in the day to just sit or to stroll. When we were sitting at the table, eating the yummy bread I said to  Steve, “This is how it’s supposed to be. Time to sit, grab some local bread to munch on, have a drink and just relax and take in the scenery.” He agreed wholeheartedly that this was indeed what we signed up for! So today was a lovely ride except for…the horrible wind and it’s side-kick, the rain. We were not deterred though, from enjoying the scenery or the whole experience of pedalling through those lovely, picturesque and very new to us, scenes. It was also very very nice to have the super flat path to follow. Flat is a new experience too, considering the hills we’ve been riding and it made the whole experience that much better for sure! So today had some super highlights, even though the weather was lousy…

1. I had a go at speaking French to a French person.

2. I rode along a beautiful route

3. I rode along a beautiful route that was FLAT!

4. I met some lovely, friendly people

5. I ate some beautiful crusty artisan bread, beside a canal, at a picnic table in a tiny out of the way village in France.

I hope tomorrow can match that, with some equally simple things but very very special things nonetheless. We shall see…

3 thoughts on “A Very Nice Ride Except For…”