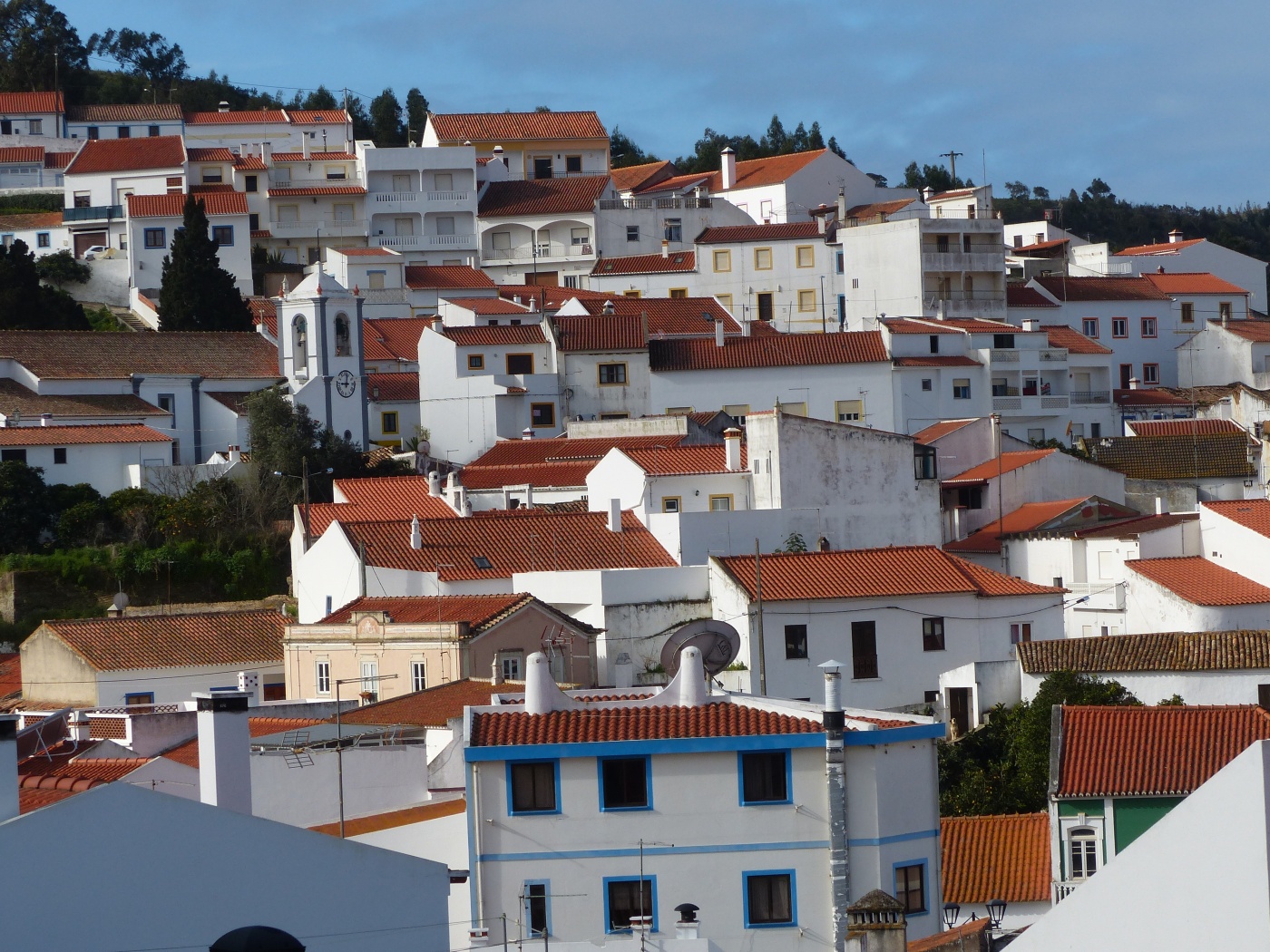 Ok, put on your skirt, pull up your bobby socks and pick up your pom-poms…

What have we got?

Yep, it was a touchdown for the hills today. I think we won in the end but it was a tough and brutal battle on the road.

After a very cold night in the tent, the first where I shivered most of the night and we woke up to a really heavy dew that had left everything feeling wet, we eventually set off. We were feeling pretty good that our camping park had been on a hill because it meant for the first time, we could start the day with a bit of a downhill run. That was a short downhill followed by 2km of non-stop climbing up a really steep and winding hill, with steep banking corners. It was a tough start to the day. 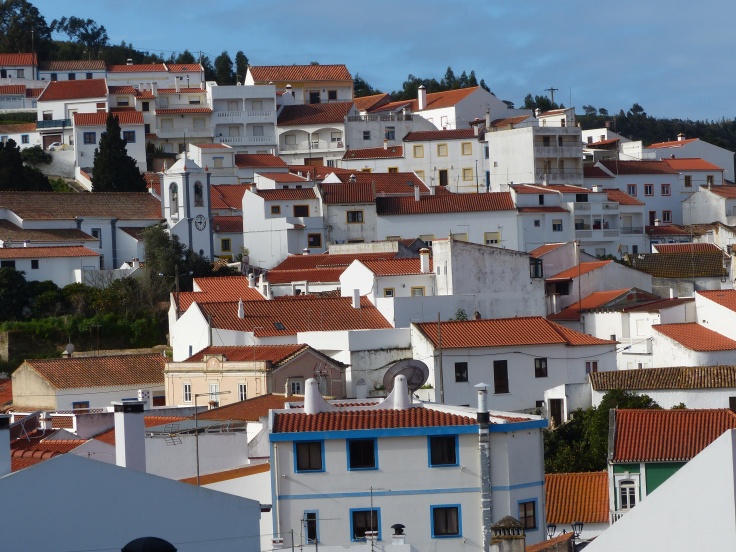 We stopped in the little town of Rogil, so Steve could pick up some pastries for morning tea and lunch (I’m beginning to worry about his addiction to pastries!) and it was nice to see the main street lined with orange trees. We continued on, with some long stretches of road until we wheeled down into  the town of Aljezur, which had beautiful views from the top of the hill across to the clusters of white houses and terracotta roofs.

We stopped for elevenses and I was overcome with an ominous feeling. I looked around me. I looked at the hills.

“I think we’re in a valley,” I remarked to Steve.

“I think we are,”he agreed.

Now my thinking was if we’re in a valley, at some point we’re going to have to climb out of the valley. Sure enough, it was so. It had begun.

From there on we were faced with pretty continuous steep climbing for the rest of the ride. The hills were long. The hills were steep. The hills were twisty. The hills were not our friend. I felt carb loaded from my enormous bowl of oatmeal and extra raisins and took on the dastardly foe with grit and determination. I pedalled. The wheels turned. The gears cranked down, down and down again. I slowed. I slowed some more. At one point I didn’t know if I was going to get up one hill, my cadence had slowed so much that my foot was barely getting to the top of the arc as I pedalled, in order to push down again. I was not getting off that bike though. Steve was behind me, I couldn’t look back to see how far behind me because that would have made me swerve and wobble, so I just looked down and up I went. It was hard. It was very hard.

The other thing that was hard today was I was ab-so-lute-ly freeeeezing! After sweating on the climbs, I was absolutely soaking wet from head to toe and then came the wind. The strong, biting wind, cutting through my wet clothes and chilling me to the bone. The occasional down hill was good because we got some free kms, but I’ve never felt so cold. My fingers were frozen, my jaw ached because my face was so cold, I was shivering. Steve said that in the Tour de France you’ll see the riders get to the top of a mountain and people will hand them newspapers to shove down the front of their jerseys as a barrier to the cold wind as they ride down the mountain. No such support crews for us today. At one point the sun emerged from the grey sky just briefly and it felt warm and I could sense feeling coming back into my fingers and I began to dry out a bit.

After getting to the top of one hill, we were headed up another hill to the right of a roundabout, but as I approached it, there was a big sign next to the road we were to take, with a series of crosses to say what wasn’t allowed on the road. No pedestrians, no cows and no cyclists. Tractors were allowed though. I stopped to show Steve the sign.

While he was doing that, my mind wandered to the possible incident that resulted in cows being banned from this stretch of highway. Now I would have thought that cows and highways were an obvious mismatch, but someone at some time must have taken their herd up a highway, in order for the need to explicitly state on a sign, no cows allowed.  Did Farmer Frank take a wrong turn one day. Or did Farmer Eric just decide it was a lot shorter and quicker to just go straight up that road? “On yer go Clarabell. Hee-up Daisy. Don’t be mindin’ that honkin’, we got aaaallll the time in the world. Mind how you go Lulu, that Mercedes aint no scratchin’ post, just keep on up thar…” Whatever happened, no cows were allowed on that highway and neither were we. Steve successfully recalculated and it was a mere 12km to our next pit stop and campsite. We headed down the hill, with Steve taking the lead and soon came to a junction. Steve stopped. I stopped behind him.

“The GPS is saying to go up that road, but I don’t think it’s right,” he said.

I refrained from making yet another disparaging remark about the navigational skills of the GPS and instead said, “Get out the other map.”

This map did indeed reveal that the road the GPS was taking us on had even worse hills than the ones we’d been tackling all day and the other road would still get us where we needed to go and still had hills, but no worse than we’d already slogged up. Good onya Steve for ignoring the GPS and stopping, because your brain was a whole lot smarter in the end! So, GPS ignored and map reading taking over, off we went. Up we went. More climbing. More hills.

Finally, we came over the brow of a hill and below us we saw the ocean and boats and Lagos, our destination for the day, with a campsite another 5km out of the city. We headed into the busy streets to navigate our way around the outskirts of the CBD, to continue on to our camp. We soon discovered that Lagos has very very steep streets. So just as our legs were about at their limit of endurance from climbing all day, we asked that little bit more of them to get up hills akin to the streets of San Francisco. That was hard. That was very hard. Well, many climbs later, we eventually arrived at our very nice looking camping park after 52km of riding. We had earlier decided to pitch the tent again because we thought it would be a bit warmer further south, but by the time we arrived we were both so knackered, we couldn’t be bothered dealing with a tent, so we opted for a cabin. Once again though, we were allocated a cabin at the very top of the park’s hill. Fair dinkum! It’s a nice little cabin though, with a view of the green hills (far far away from us) and ocean glimpses. Steve headed for the shower and I headed for a couple of peanut butter and jam sandwiches, to recover from a long, hilly and hungry ride. We’d opted not to stop anywhere to have lunch because we were so cold and sitting around would have only made things worse. So finally fuelled and warmed, we felt much better.

As I was making notes in my notebook of the things we’d seen or done during the day, I asked Steve what he remembered of the day, in case there was anything I’d forgotten. His reply…”Hills” that’s all he said. One word. He then repeated that word several times over. That word. That’s all that had to be said. That’s all he remembered. He said he’d struggled today and I said it was a tough day, a really tough day. We made it in the end though. We’re going to take a rest day tomorrow, after three days of long rides and hilly rides, so we’ll explore Lagos tomorrow (which we’ve been pronouncing Lay-goss, but we discovered today is actually pronounced Lar-goosh). It will probably mean walking up lots of hills, but we’ll do it at an amble and take some rest stops if we need to. I think our quads deserve to be nursed a little.

So we’re still loving Portugal, even though it’s throwing everything at us…hills…rain…wind…more hills. What’s life without a challenge or 2…or 34…or 57? Rock on!

(Oh, and I’ve added some photos to yesterday’s blog post, now I have some slightly better wifi)

4 thoughts on “Is That a Hill I See Before Me?”