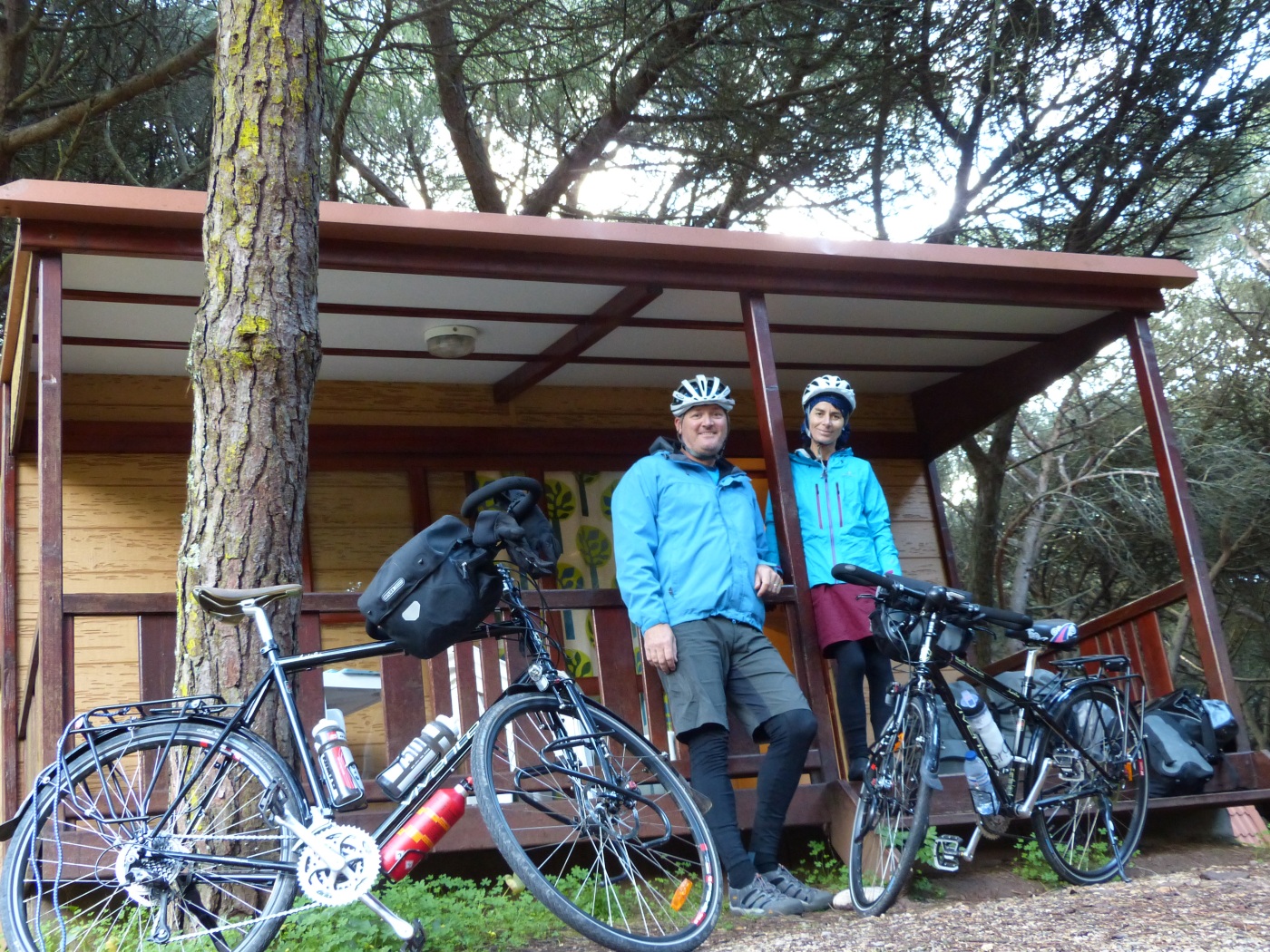 I nearly didn’t have time to write this blog, I’ve been fielding calls from Vogue wanting us to be on their next cover because we’ve made such a fashion statement today! Steve in his shorts and thermal leggings, waterproof socks and sandals and parka. Me in my baggy skirt over leggings to cover my padded bike shorts, waterproof socks, strikingly unmatched bright blue parka and  Buff bandana under my helmet with tail hanging down to cover my hair which seems to take forever to dry. Aren’t we a picture! I’m sure you’ll be seeing those trends popping up on the runways of Paris and Milan before too long. The benefit of travelling in foreign lands is, you can happily take a step or fifty-five down the scale of fashion and general appearance and no one is going to care, least of all us!

Well today was another of those days we probably don’t want to repeat. We got a little lost. The day started off so well, we were doing a no-tech ride and following a map that has the roads and bike paths marked on it and we’d successfully navigated the Lisbon traffic and roads to go to Belem Castle, where we stopped for some pics and a little snack. The only thing we’d known about Belem Castle previously was that is was the site for a challenge on The Amazing Race!

Being a Saturday, the traffic was a little lighter which was good and being a Saturday, the runners were out in droves! They were everywhere! I haven’t seen many runners about, so I sat and watched them, all the time wishing I was with them. Soon, hopefully, soon if my dodgy foot plays the game by the rules. I’ve decided though that I really have to get with the program and get me some more fluoro! It was a veritable kaleidoscope of neon with all the runners. We pedalled off and I cycled past groups of runners, checkin’ out their foot strike (as I always do to see if any are like mine to reassure myself that my way is OK), checkin’ out their shoes (gotta get me some of those shoes!). A fella ran past, gave us a wave and said, “Hello.” A friendly lot my running people. Then we stopped at a monument to exploration, which was huge and most impressive, took some more pics, said, “no thanks,” to a man who resembled someone from a Godfather movie asking if we’d like to “buy a chain? Is gold, is gold,” then set off again.

We headed for the ferry and caught this across the river to the south bank to continue our onward journey south. Today was really our first free wheelin’ day with no firmly set destination in mind. We’d looked at some possible campsites and figured we’d stop at one of those along the way. When we got off the ferry we set off along lovely flat cycle paths and I found myself thinking ‘If only every day could be like this’ – oh boy did I think too soon! Anyway, as we cycled away from the wharf, there were some men fishing and one turned to us as we went past, gave us a thumbs up and said “Very good! Very good!” Nice man. On we cycled and basically hugged the coast for a while, travelling along bike paths beside the beach. We stopped by the beach for lunch, for which Steve had a sizeable hamburger and Coke and for myself, well no friendly food I’m afraid so I had a couple of pieces of very stale bread from our supplies, liberally spread with peanut butter and honey. A feast! I’m easily pleased at the moment!

As we were setting off, Steve looked at the map and said, “We’re about 11km from the next campsite, so we’ll be there in an hour or so at about 2.00 and that seems like as good a place as any to stop for the night.” (More words spoken in haste as it turned out!) So off we pedalled and did some steep hill climbing (that’s not just me saying that, the map has the hills graded and these were graded as steep). So back into low gear I went pedalling for all I was worth to get up to the top and at least we made it up all the hills without having to get off and push. The roads were really rough, with huge crater sized potholes, which made it a bit hairy scary with the traffic at times, because it was a case of ‘do I keep going through that enormous great hole and risk damaging a wheel or do I swerve around it and risk being collected by the car behind me?’ As it was, the traffic was pretty courteous and gave us a wide berth, driving around us with good space to spare for the most part…except the bus, he came pretty darn close and I tucked my elbows in and hunched my shoulders when he went past! We got to a town and pulled over to check the map again and we weren’t 100% sure where we were but had a pretty good idea we were still heading in the right direction. As we were looking at the map, a cyclist went past, then a minute later, the cyclist returned and pulled up beside us. “Hola,” said he, “need some help?” We exchanged greetings and discovered this was George who had stopped to help…Funky Hunky George with the wrap around sunglasses, designer stubble and state of the art lycra. We showed George where we were heading and he took our map to consult and then began to point out where we needed to turn. Now…I’ll pause here for a moment because I will not hear a harsh word spoken or joke made about women and their map reading skills or general navigation, because I had to smile as I watched George turn the map upside down, right way up, clockwise, anti-clockwise and this way and that, just as we women are laughed at for doing at times! So enough already of thinking it’s a female thing!! George then gave us some stunning advice…type our destination into the GPS! Now, we’d been doing OK without that dopey GPS so far today, but with George being so helpful we thought it best to type the coordinates into the device since we were under George’s instructive gaze. Task completed, we shook hands, said our “Obrigados” and goodbyes and off Funky Hunky George cycled, leaving a slipstream of pheromones behind him.

We set off again, following both George’s directions and the GPS, to find ourselves thoroughly and utterly without a clue as to where we were.Even Steve said, “I’m not using the GPS anymore, it’s hopeless.” (I felt somewhat vindicated in my attitude towards the thing!). Now whether it was the dopey device, George’s upside down and sideways directions or just the travel gremlins, I don’t know, but we were lost. We again consulted the map, figured out where we’d gone wrong and set about plotting a revised course. Off we went. Soon after Steve said, “I’ve got no idea.” So we stopped at a nearby shopping mall, wheeled in our steeds and sat beside the mattress store to recalculate. It was now getting late in the day and there was just that hint of desperation creeping in, that we really should find somewhere to stay for the night. We’d found a possible hotel close by and decided that was as good as anything, so off we went. We found the N378 road we had to be on (I ignored maps and devices and just pointed out the signs!) and set off to go round about the busy main road to get there. We pedalled through two lane roundabouts, along a main road to where the hotel was located…no hotel, or if there was it was up a very dodgy looking dirt road with some warehouses at the end, so we decided we weren’t that desperate. Off we went again, in the general direction of the campsite we had expected to reach in a mere short hour or so, all that time ago at lunchtime. We powered on,up hills, around tight bends, beside speeding traffic until we came to the turn off that actually had the sign we were looking for…Campismo! Oh joy, a wee sign that a little bit of navigation had gone our way today. On we went, up more hills, down more hills, we should have got there by now…keep going…is that the sign for it?…no…keep going…I really hope we’re going the right way…I really hope this campismo is still in operation. Stop. A dirt road, with a small hand-painted sign saying “Resort”. Is that it? Consult the map. No, not it. On we go up the hill, patient traffic swerving around me each time I get the slow wobbles and slow swerves as I haul my load up more hills in low gear. Finally…a sign…campismo and a little tent icon. You Beaudy! We cycle down the gravel road, feeling our destination is upon us. We keep cycling, big hulking dogs bark at us from behind fences, I nearly come a cropper in the thick gravel of the road. “We haven’t passed a sign?” asks Steve. “No,” I say, “Except the one that said Parada but I don’t know what that meant.” We keep going, just hoping, as the day draws in and the shadows lengthen and the air gets cooler, that there will actually be a place we can lay our weary heads. Please be there. Please be open. Please have a little house for us with a hot shower and a heater. Well, we finally get to the end of the road and there it was, our campismo. No little house with heater for us, but a plot of grass. So we pitched tent. I wasn’t much help because the wind was howling and I was shivering all the way up to my shoulders and couldn’t hold the tent poles steady, but we eventually got the tent up. I had a hot shower in the communal block, which was beautifully scalding hot, so I warmed myself up to the point of looking like a cooked lobster, then fired up the Trangia and ended the ordeal with…you guessed it…a big mug of tea! 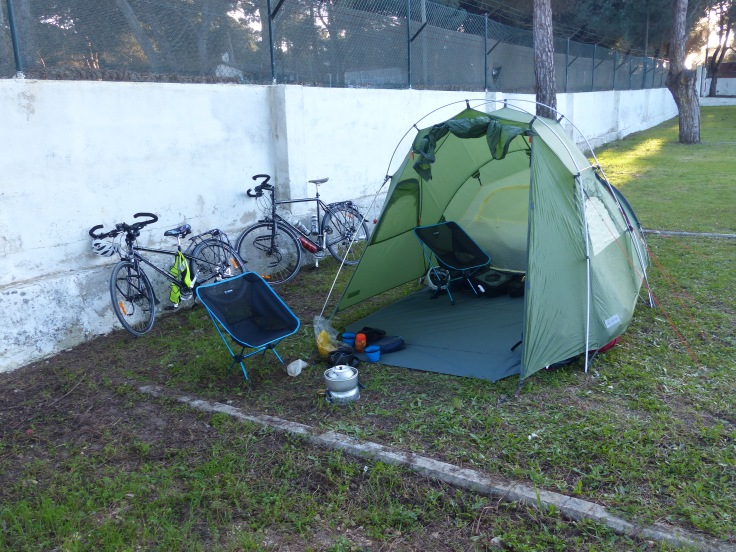 So we cycled 55km today and the day was probably a little more adventurous that we’d intended. Now I’m typing this in our tent, with the wind blowing, wearing two puffer jackets and a thermal, listening to cats howl, dogs bark and cars speed along that gravel road. Once again tomorrow is another day. May it come without a hitch and see us continue to learn from our navigational no-nos and send the travel gremlins packing!

6 thoughts on “A Little Bit Lost”