Today was a roaming day and we decided to detour slightly. We left the bikes in the cabin in the woods and took the train north to Sintra. First we had to find the train station, which we’d decided to walk to, following…oh dear…the GPS! Well, let’s just say the route it gave us was very round-about and we walked through some dodgy looking neighbourhoods and what looked like a huge housing estate with tower blocks. Mind you my only reference point for identifying it as that, is that it looked a bit like the estates on The Bill, when Polly Page would regularly shout “Sierra Oscar from 595 receiving? Assistance required on the Jasmin Allen Estate!” Anyway, it looked a bit like one of those places. (Yes, sad I know that my single talent is a memory of quotes and characters from old British crime dramas!). Walking through there I was looking at the cars parked all over the place – some beat up Peugots, dusty Renaults, dented Citroens and then a couple of shiny, spanking new Audis. ‘Hmmm, I thought, they look a bit out of place, I wonder if they belong to a couple of colleagues or associates of the friendly neighbourhood drug dealers we came across in Lisbon?’ Maybe I’m just selling them too short and making terrible assumptions because I watch too much BBC! Oh, and remember I was saying how much English there is here, well check it out – there’s even English graffiti! 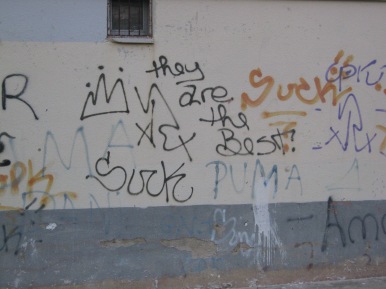 We finally made it to the train station and rolled up to the ticket desk. The man serving didn’t speak as much English as the people we’d come across in Lisbon, but he was able to understand what we were trying to ask, which was to buy a ticket that we could use on all public transport. Bless him, he was writing down prices for us so we could read what he was saying and he patiently listened to us explaining ourselves. The end result was, we got the ticket we needed. The fact that this lovely man didn’t speak a lot of English was beside the point – the man spoke English! It’s so impressive to be here and have everyone we’ve come across speak English, which like I’ve said before, just makes it that bit more embarrassing to be among the millions of mono-lingual Australians. I’ve vowed to learn another language to rectify that (someone hold me to that!).

It was a 30 minute trip to Sintra and when we walked out of the train station, oh my…that town can only be described as BEE-YOO-TEE-FUL! It’s a UNESCO World Heritage Listed town because of all the significant sites, such as castles and palaces, but the town itself is worth a trip to Portugal. Beautiful cobbled streets, tiny narrow passageways with little shops and restaurants lining the narrow little back streets and laneways. I’m glad we left the bikes behind because Sintra is a town of hills and steep steps! So we roamed and strolled around the town and I’ll admit my legs felt a wee bit tired after yesterday’s hill climbs pushing the bike, so walking up the Sintra hills and steps most of the day, I felt my legs talking to me! 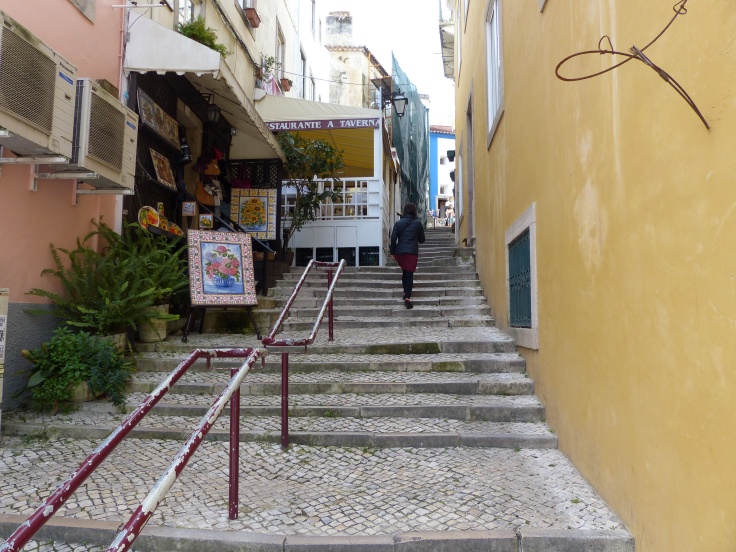 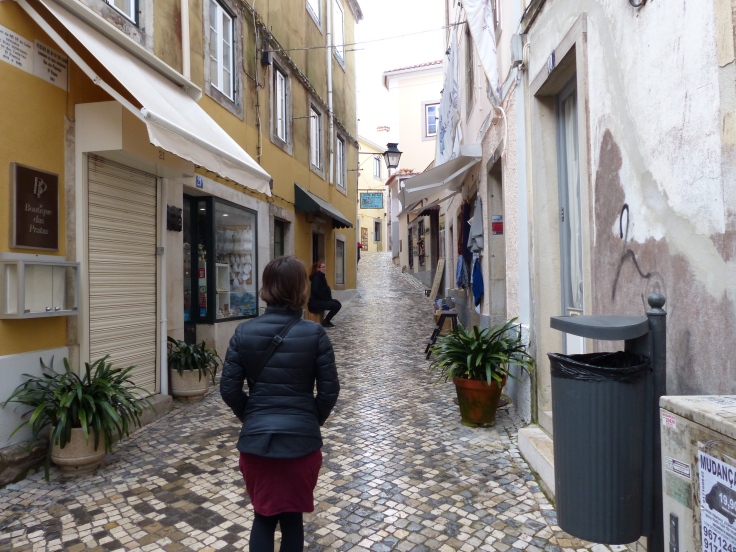 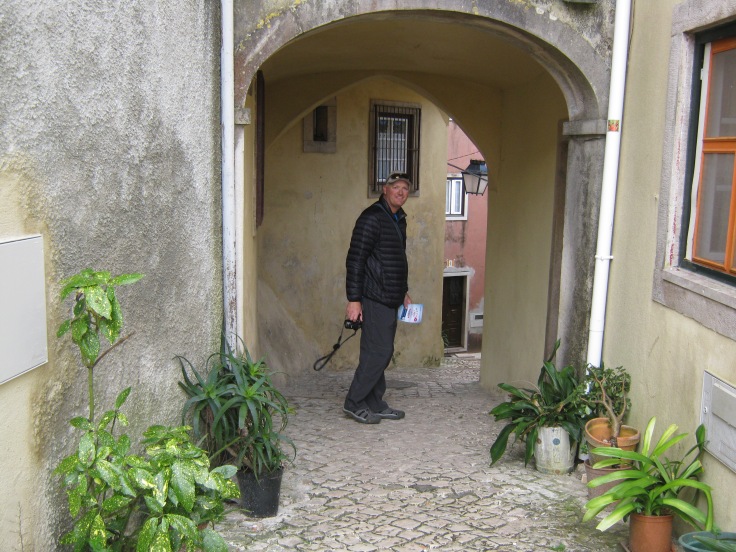 We looked through the National Palace which was ornate beyond belief, with painted ceilings and tiled walls. The palace dates from the eleventh century and was used as a residence for generations of the royal family until the 1800’s. The designs and decorations have a mixture of Arabic, Indian and Roman influences and it was just simply stunning. The two big towers you can see in the photo are actually twin chimneys from the kitchen. These people did nothing by halves and they obviously weren’t going to settle for any old range hood for their stovetop, no siree, they went for the super deluxe option of those two giant chimneys. 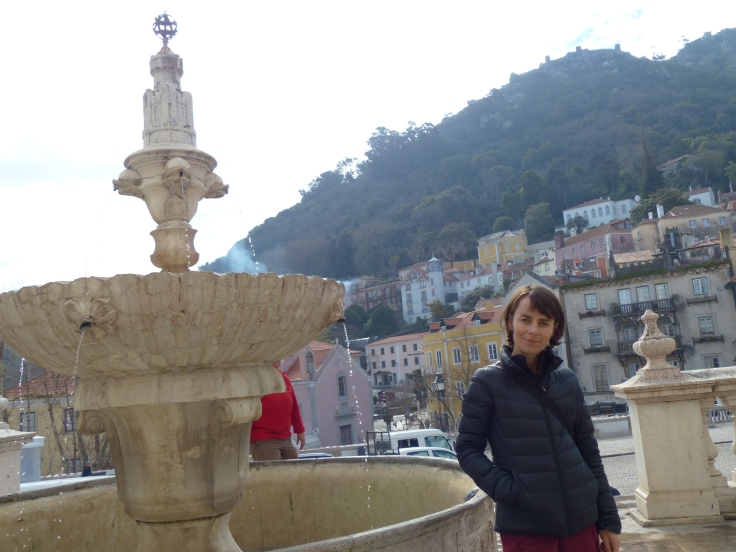 One of the rooms has the ceiling covered with paintings of magpies. The story goes there are 136 magpies, representing each of the women at court because the king thought the women chattered too much! Around each magpie are the words, ‘Por bem’ meaning “no harm meant”. I think it’s too late to try and smooth the waters that way King my old mate, I don’t reckon the ladies would have seen the joke myself. The other room I really liked was a bedchamber, which was quite a small room in comparison to others, still with beautiful tiled walls and in the middle of the room was a beautiful, ornate…fountain! Now, I must say, I took a pause for thought there. I know when you’re royalty you can pretty much have whatever you want, whenever you want, but a fountain? In your bedroom? Why on earth would you want a fountain in your bedroom? That plinking and plonking water would have to keep you awake all night and leave you in no fit state to be chipper and bright for all those regal activities the following day would require. Even if you did get to sleep I reckon you’d be waking up on the hour with dreams of needing to pee, with all that rushing water entering your sleeping thoughts. Personally, I couldn’t see the attraction of the bedroom fountain!

We also discovered that Sintra was the summer holiday spot of Lord Byron.

We then walked up the hill to Quinta da Regeleira, which was another palace with huge sweeping grounds and gardens, with underground walkways, fountains in little nooks and caves, towers, a chapel and pretty much everything a rich person of the day could want or need. It was bought by a fella in 1874, who inherited money and obviously decided to spend it on building a palatial house and architecturally designed gardens. It took 12 years to complete and he built it as his summer holiday home. So he only used it for 4 months of the year! Yes folks, what you are seeing in the photos there is the man’s shack! 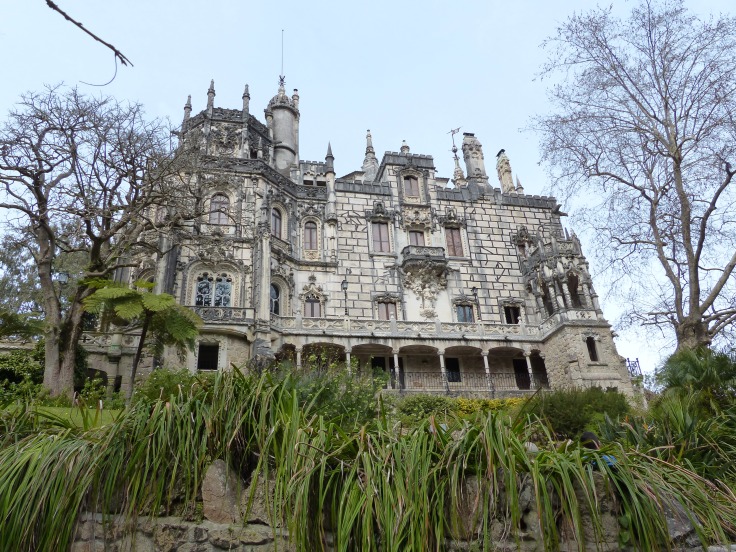 Oh, I also spotted a celebrity in Sintra! We were walking past a cafe and I saw a face that looked really familiar, accompanied by a British accent. Ooh, I thought, I know who you are, I’ve seen you in an episode of Midsomer Murders (sorry, there I go again with my sad and pathetic superpower of recognising things from BBC crime dramas)! So I got Steve to take his photo while I stood there acting like a decoy, so it looked like Steve was taking my photo but he was really taking a paparazzi zoom lens shot of my spotted celebrity! I was pretty stoked with that. I looked him up on IMDB and it turns out he speaks fluent Portuguese, so there you go, maybe he’s a regular there!

After a day of roaming Sintra, we headed back on the train and then decided rather than walk back to the cabin along our earlier route, we’d take the bus. After a little bit of time interpreting a transport map and figuring out which direction we needed to go, we successfully boarded the number 750 to get to our campsite. Now, I know I can be a bit geographically challenged, but I’m a landmark navigator – I remember things and notice things and if I see a car or building or sign I recognise, that’s how I get around. So I was pleased on the bus ride back, to spot familiar things from our earlier walk and then I relayed that to Steve to let him know we were going the right way because he was too tall to see out the window (we were standing up in a crowded bus). When we got to what we thought was our final stop, Steve said, “I think this is where we get off.” Straight away a lovely lady sitting on the seat near us said, “Campismo, yes, yes,” to tell us it was indeed the stop we needed (we obviously looked like the inhabitants of a caravan park). Very friendly and helpful people our Portuguese. Which reminds me of something that happened yesterday on our “ride to remember” – we were crossing a really busy road with cars speeding along, but there was a pedestrian crossing, so we were looking left and right ready to charge across because traffic is supposed to stop. A car slowed down and stopped at the crossing to let us get across the road, but another car coming in the opposite direction didn’t and just sped through the crossing. Well, did that fella in the other car go crook at him! He tooted his horn and clapped his hands to let that speeding driver know in no uncertain terms that he should have stopped to let us get across the road. Nice man going into bat for us!

Speaking of Steve being too tall to see out the window, we’ve decided that Steve would be no good living here. Everyone is beautifully average – average size, average height and as you can see, Steve would have a hard time living in the average sized homes without constantly wearing a hard hat for all the head banging on doorways he would experience. 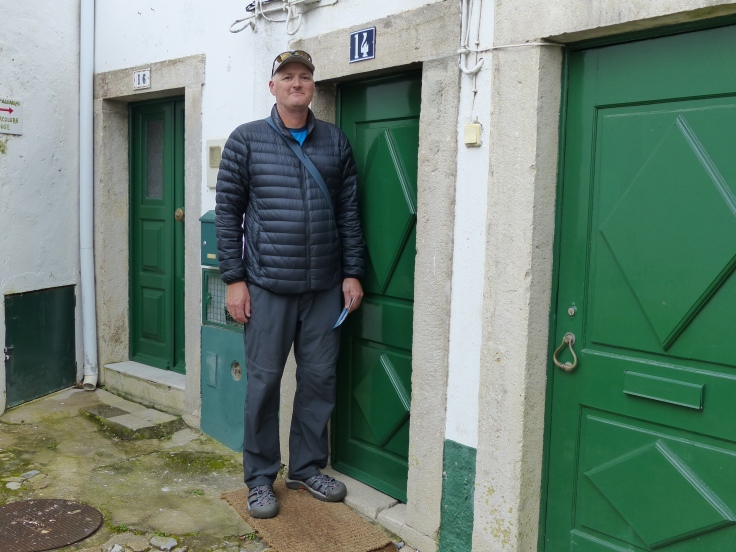 The other thing I’ve noticed about the Portuguese people, apart from being very friendly, is they are brilliantly creative car parkers. We’ve seen cars parked on the side of roundabouts, in intersections, in the middle of the road and today we were walking along a line of cars parked on the side of the street in Sintra, just parked as you do, nose to tail up the street. There was a space between two cars though and another car had parked in that space at right angles, nose in to the footpath. Just sneaked in there and decided to buck the system and angle park, right in that little space. See a space, take it no matter what!

Well, tomorrow we pack up again, sling our leg over the saddle and begin pedalling south. Hopefully we’ll go in the right direction, on sealed roads with a little bit more downhill that up. Or…not… because this is us we’re talking about! If we have another dodgy ride though, those letters in GPS will stand for “Getting Pulverised Slowly” courtesy of me and a heavy object!

2 thoughts on “A Delightful Detour”