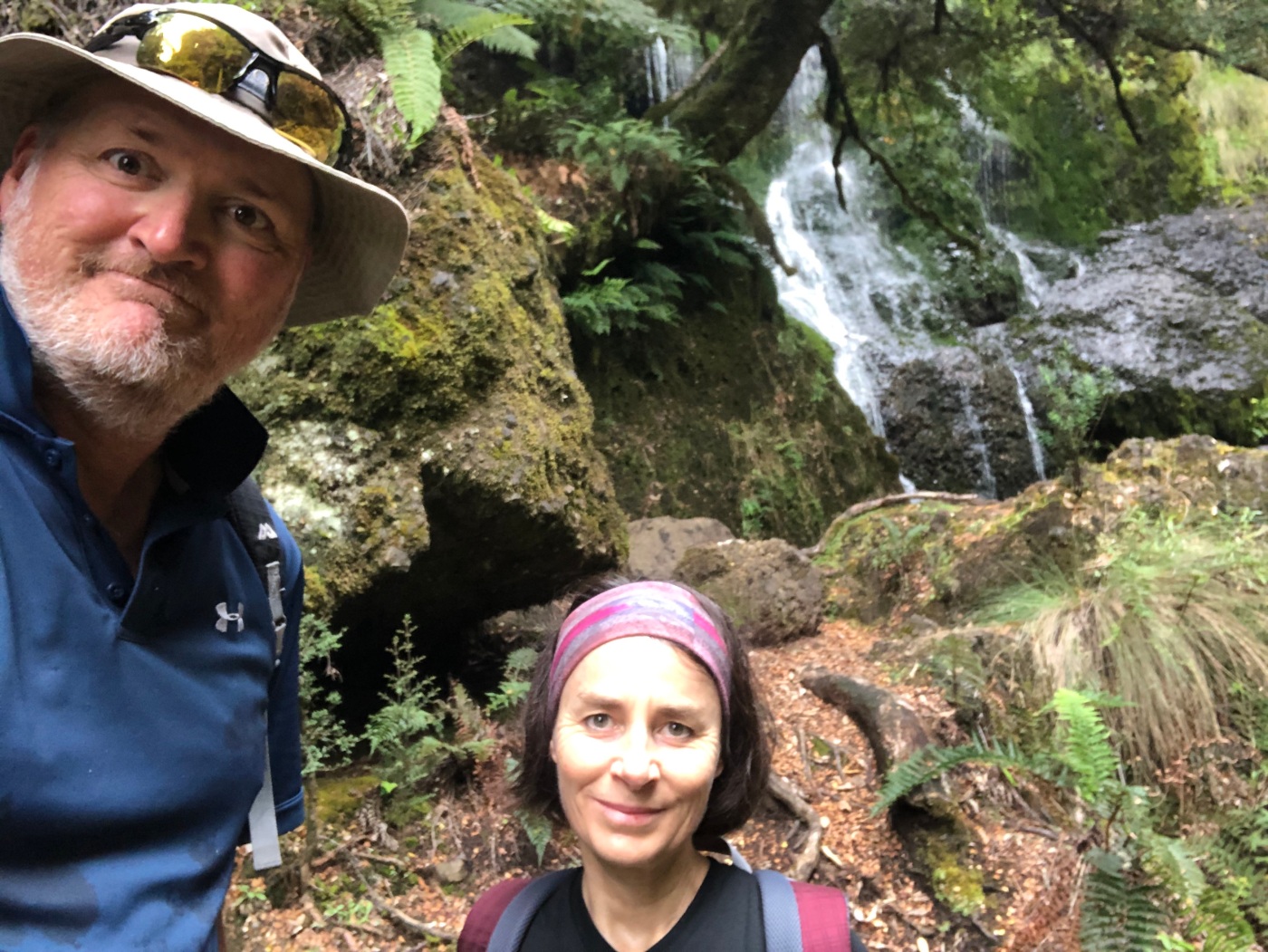 Day two at Cradle Mountain and we headed off for a walk that would be a little more rugged, with a bit more scrambling and no friendly duck boards to stroll along. We set off to walk to Champagne Falls and Bridal Veil Falls. As we signed out in the walkers’ book to say when we were leaving and where we were heading, we noticed a bowl of salt packets sitting on the table near the door. Hmmm, what could they be for? Complimentary condiments? Provisions for a walker’s picnic? No. We were going for a BUSHwalk to WATERfalls, where it is WET. What critters bring out the brass band and snap party poppers in that environment? LEECHES! We obviously had to be on the look out for the blood sucking little fellas.

The walk started up a 4WD track, so no fear of getting lost, but it had a bit of an incline. Enough of an incline to get the heart rate up a bit and the lungs puffing. Then, a turn off the road and we were in the bush, on our way to Bridal Veil Falls via Champagne Falls. We had coloured markers on the trees to follow and there were some good slopes to scramble down and then scramble up, dodging rocks and tree roots, with that lovely silence of the bush and smell of the wet leaves, a lovely place for a walk and scramble. Eventually we headed down a bank, over some rocks and we’d arrived at Champagne Falls.

A trudge back up the bank and follow the markers again and we headed towards Bridal Veil Falls. We crossed over a foot bridge, crossing Bull Creek and decided to stop for a game of Pooh Sticks. That classic game, invented by Winnie the Pooh, of dropping sticks into a river and seeing which one comes out from under the bridge first. We chose our sticks, stood at the rail of the bridge and 1 – 2 – 3…drop. Steve was Pooh and I was Piglet and I willed my little stick to get into a good flow of the creek and race under the bridge. Piglet did not do that. Pooh did that. Piglet went…backwards! Yes, I kid you not, my stick was not in the mood for racing or in any competitive spirit whatsoever, because the Piglet stick went UP stream! My stick was defying the laws of something. Physics? Aeronautics? Aquanautics? A. A. Milne? Whatever it was, it went against the current! Then…success, it turned and started floating downstream, heading back towards the bridge, then…it found an eddy, turned a circle and went backwards again! Backwards I tell you! Up stream, I kid you not! Against the current! You can probably imagine the smug look on the winner’s face, with a champion’s hands in the air, as the Pooh stick swam to victory. Piglet still hadn’t made it back to the starting point at the bridge! Oh well.

Along the track, a scramble here and a trudge there, a wrong turn once, before finding our way back to the markers and we could see Bridal Veil Falls, passing some very colourful and interesting fungi and lichen along the way. We walked up the bank and you could actually walk behind the falls, stand in the rock overhang and look out through the falling water. That was pretty cool. We stopped, sat on a rock and had a snack, looking out through the “bridal veil” of the water raining down. Lovely.

As we made our way back down the track, we had to cross Bull Creek again along another foot bridge. Right! Time for a rematch! We chose our sticks again. This time Piglet would prevail! 1 – 2 – 3…drop. The sticks hit the current and raced under the bridge…woo-hoo, my stick had actually gone in the right direction and had made it under the bridge! But…then…just as it was emerging from under the bridge, it stopped, turned 180 degrees and started floating BACKWARDS! AGAIN! What is this! It’s an anti-Piglet conspiracy I tell you! Pooh once again, floated at full speed in the right direction and glided to victory, before continuing to plummet on down the creek. Piglet? Well, the Piglet stick continued to make its way in the WRONG direction, AGAINST the current, back UP stream! I don’t know! Who likes Pooh Sticks anyway!?

Despite the recalcitrant stick experience, it was a top walk. We headed back up the bank, with some sections of steep scrambling and made it back up to the 4WD track that took us back down towards our starting point. We detoured along another track to take the extra Big Tree Loop walk, seeing some more interesting lichen and fungi along the way and then back to the start to sign back in to say we had safely returned and then time for a cuppa.

That was a great walk. Peaceful bush to walk and scramble through. Lovely scents of the different trees and plants and that wet bush smell. Beautiful trees, pretty waterfalls and neon fungi to marvel at too. We had the bush to ourselves, not another soul around. As soon as we got back to our room, we stripped socks off and did a leech check on the legs and feet and we’d made it back unscathed. No need to season ourselves with a sprinkling of salt, we clearly weren’t tasty enough today. No need for salt with our champage, we got to experience it au natural. So, we raise a glass to another top day and to the bride’s lovely veil and three cheers again to Cradle and another gem of a corner of our little Tassie island, clink…clink…here’s to you.

2 thoughts on “Would You Like Salt With Your Champagne?”