Well, that took all of five minutes.

Those navigational gremlins don’t just perch on our shoulder, those beasties just take up residence. When there’s a right turn and a wrong turn, for some reason, we’ll go wrong every time!

We, like most of the rest of the world, have been experiencing the challenges of restricted movements. Now though, in Tasmania, restrictions have eased, we have no cases of the virus and things are opening up. One of the first things to reopen was National Parks and reserves, so with a long weekend Steve and I set off for a ramble. We’ve been really fortunate that through all of this difficult time, we’ve still been allowed to get out and about for exercise which, because of where we live, has meant we could still walk, run and ride beside the river or along the beach, something we have been very grateful for. Now though, we had the opportunity to go a bit further afield, so we set off for Narawntapu National Park, not far from where we live, to ramble, amble and climb Archer’s Knob. Our last opportunity to do a walk like this, had been our trip to Cradle Mountain before the world changed, so it was great to once again spread our wings in the great outdoors.

Rolling up to the start of the walk, there were cars aplenty and we started to wonder if distancing was going to be a problem, but it turned out that while there were a few folks seemingly waiting to start a group trek, we set off without another soul around us. When I say we set off, this is where we set off in…the wrong direction. Of course we did. We found ourselves walking through campsites, past weekend caravaners and brave tent dwellers enjoying a chilly winter camping experience, at which point Steve announced that we were indeed going the wrong way.

We could see what looked like a track up ahead, rerouted ourselves and discovered the alternate (a.k.a. correct) path. It was a magic day for a ramble, with crisp air, blazing blue sky and companion blazing sun, that while keeping its sedate winter character, was enough to melt the frost and warm things up a bit. The track was well marked and we ambled through the bush, past the wetlands, with a resident wallaby  observing our progress, but showing no sign of being fussed by a pair of navigationally challenged ramblers trudging past. 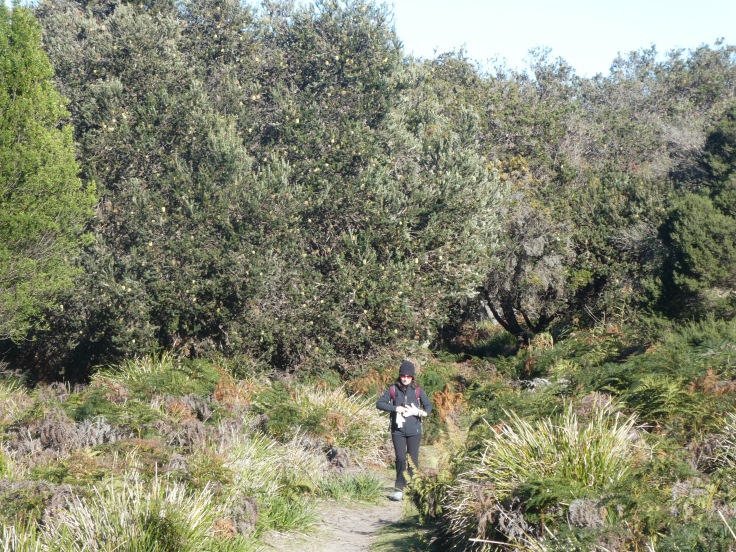 We carefully stepped over tree roots, wound our way past steep hillsides and then began our climb up the Knob. The track weaved up and around the slope and gave more than ample excuse to stop for a breather as we could look back over our shoulder and take in a fabulous view of the beach and water below. The track remained all but empty of other folk, just a passing couple and a family enjoying the day, so we had the path, the scenery and the spectacular day, pretty much all to ourselves. 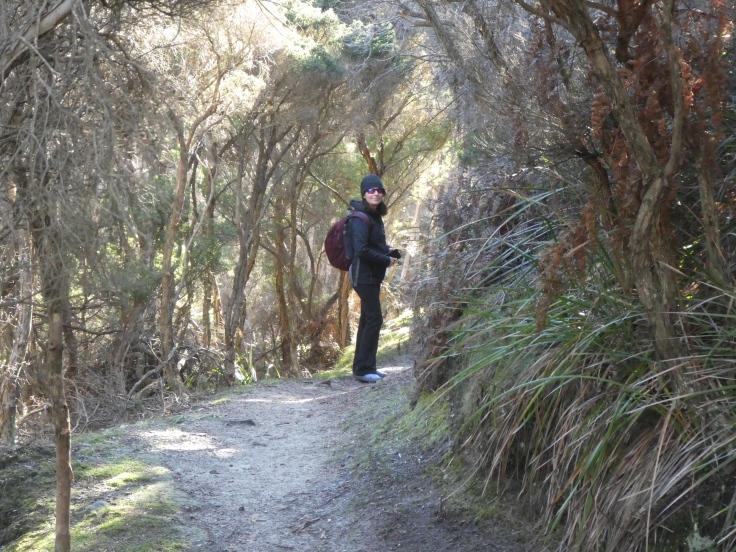 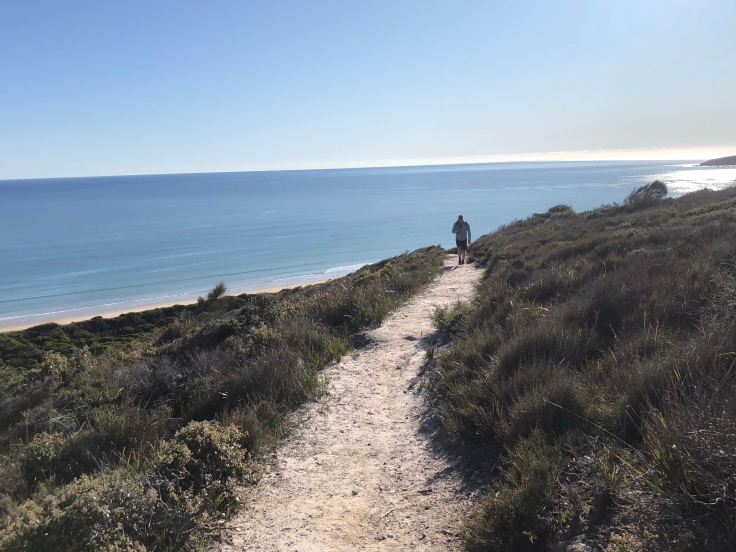 A bit more trudging, a few more stops to enjoy the view and we made it to the top. We’d nailed the Knob! We took in the view down to the wetlands, while we waited for a family to finish their pitstop on the one seat on the peak and when they began their downward stroll, we perched for our own elevenses. What a top spot! All of this right on our doorstep!

Off we went, down the track towards the beach. This is where we had two options. We could turn around and follow the track back the way we’d come, or take a different route and walk back via the beach. We opted for a change of scene and descended down to the sand.

There were some folks in the far distance, but when we got down to the beach, there was nary a soul around. Another magical Tasmanian beach, with crystal clear water (we won’t mention the temperature of that water, but it looks fabulous!) and clean white sand with only our own footprints to be seen.

The walk along the beach was easy and gorgeous, with the clear waves crashing and a couple of Oyster Catchers flying beside us. They would land ahead of us and then take off again as we approached. They hadn’t quite realised that we were going to keep invading their peace if they kept landing in front of us. A better bird strategy would have been to land behind us, but no, they kept taking flight each time we caught up to them, then flying off only to land and wait for us to catch up to them again. Maybe it was their choice of entertainment for the day.

We turned off the beach, back into the bush and stopped at the bird hide in the wetlands to look out at the bird life, which consisted mainly of black swans today. Then back we went towards the start of the track, managing this time to avoid any clueless navigation, discovering as we did, the track we should have taken when we set off, which would have avoided the almost predicable move of going the wrong way at the beginning!

It was a top spot for a walk and so great to be out and about again. Our good fortune is not lost on us and we do not take for granted at all, these increasing moments of freedom in what is an uncertain, frightening and for many, devastating time. Our thoughts are with all who are battling this awful time and, at the moment, we’re particularly thinking of our Victorian neighbours, just a step across the Strait from us here in Tassie, who are going through a terrible second outbreak and lockdown. While we do not take for granted the situation we have here in Tasmania, it has also been yet another reminder to not take for granted what we have here in the everyday places that make up our small island home. The global situation has curtailed travel, which has kept us closer to home and has meant seeing more of what is on our own doorstep. We have probably spent more time exploring far flung locations than we have the places right here in Tassie. That, we vow to change and our ramble in Narawntapu was an opportunity to enjoy and reacquaint ourselves with what we have right here. If a silver lining in all of this, is being “forced” to appreciate the things we have, then we’ll take that silver lining and buff it up to a shine. We all need some things to glimmer right now. So, getting out and about to run, ride or roam in our own little patch, will be our bright spot for now…appreciate what we have…look at it with new eyes…be grateful and joyful for the everyday pieces of magic. They’re out there.

4 thoughts on “A Freedom Ramble”