We’re back. We’ve arrived. We’re home. We’re on Tassie soil again. After six of the most amazing months, pedalling our way through parts of Europe and the U.K. and as mightily hard as it was to end such an adventure, end it must and now we are back in our own little hamlet. Home, is just fine though.

With some time to kill in Melbourne before boarding the ferry, we decided to visit a piece of history. In all our trips to Melbourne over the years, we had never been to Old Melbourne Gaol, which is in the hands of the National Trust. We have so few opportunities to use our National Trust membership, with not that many properties in our neck of the woods, in fact we get more use of it overseas than at home, so we decided to pay a visit to this piece of Melbourne history while we were in town. The first block of the gaol was built between 1841-1845, with a second block being built between 1852-1859 and then additions were constructed over the years. This place was tough. It was harsh and brutal and overcrowded. It housed men, women and children all together, with a separate women’s block not being built until 1862-1864. 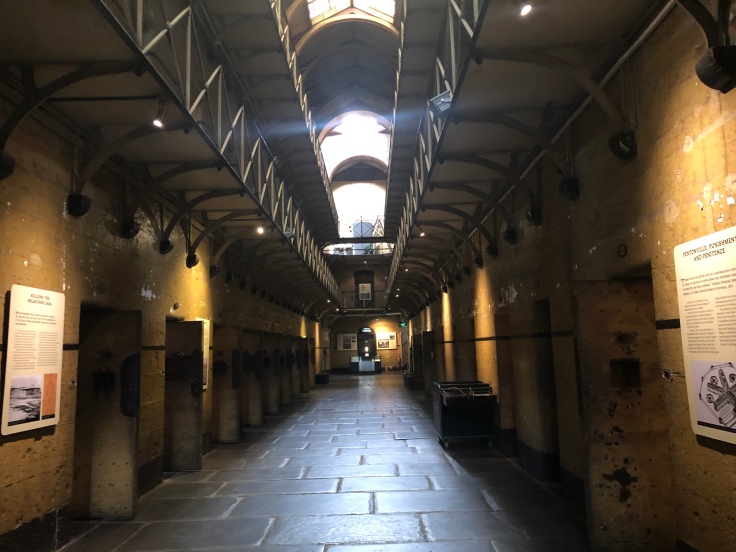 As we walked through, we could see how tiny the cells were, how dark the building was, with very little natural light and the prisoners were expected to live in silence. Work was completed in silence and when in their cells, they were expected to maintain that silence too. It would have been a miserable existence, living in solitude and silence in a dark and cold cell, for years, often for very trifling crimes. Yes, it also housed some pretty hardened criminals and many you wouldn’t want to meet on a dark night, or a street in daylight for that matter, but we still got a sense of how inhumane the treatment of inmates would have been, especially with children in there too. We saw one story of a fourteen year old boy, in there with all the hardened adult criminals, receiving “the birch” lashes as punishment. One of the gaol’s more infamous residents was Ned Kelly, probably our most known bushranger and it’s also where he was hung. The visit was interesting, but I found it incredibly unsettling and not a pleasant place to visit at all. There’s only so many death masks you can look at, so many cramped spaces to imagine bodies in and walking past the trapdoor and the gallows…well…not a place for smiles and rosy feelings. Even though Australia hasn’t had capital punishment for decades, it was still confronting to see that rope and trapdoor. I hadn’t known that the gaol was also used for prisoners of war during WWII and soldiers who had gone AWOL were also sent there. I also hadn’t realised, during colonial times, that there were hulks on the river in Melbourne. I don’t know why I wouldn’t have thought there would be, I knew of the hulks used as prisons in London at the time, so I guess it stood to reason they’d be used here too until prisons were built, or if they ran out of room, but I hadn’t known that fact. So, it was an interesting place to visit and we learned some more of our own history, but I was mightily glad to leave its walls all the same. 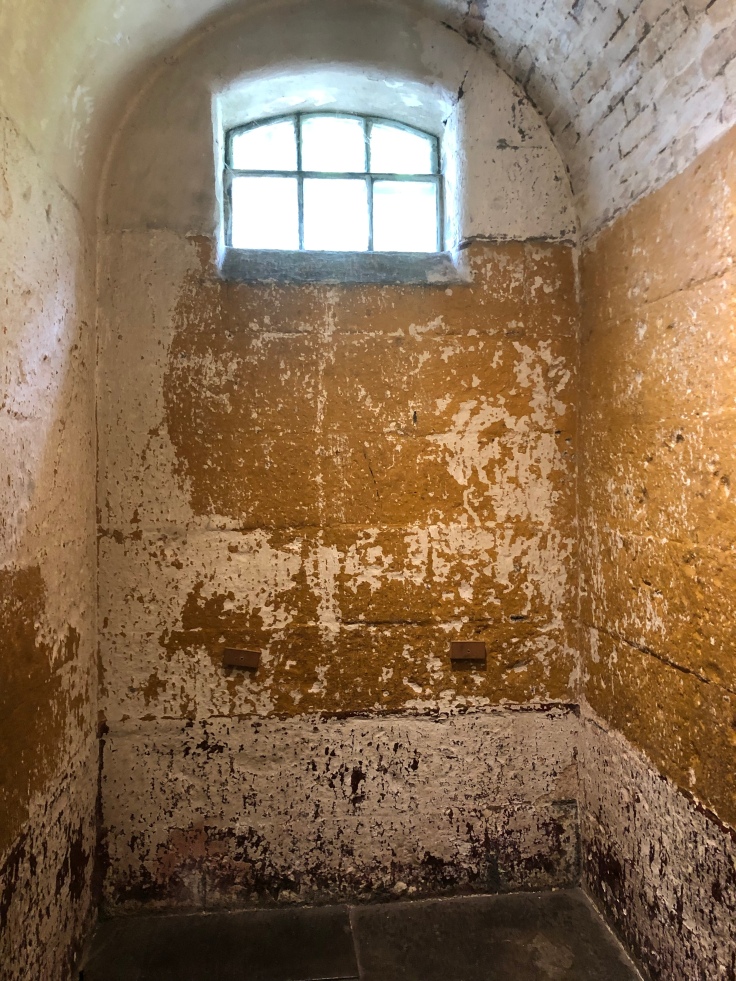 After a quick stroll around the city and a bite to eat, we returned to collect the bikes that had been kindly stored at our hotel and we hit the road. We walked them along the street, to avoid getting in the thick of city traffic and just a few hundred metres later we were on a bike path.

We then stopped for Steve to make yet another adjustment to my bike.

“It feels like the whole front end is going to fall off,” I kept saying. It was so wobbly I was feeling very unstable on my little steed. Steve assured me it was just uneven weighted panniers. I firmly assured him it was no such thing.

“I’ve tightened everything,” he said again.

“Well, something’s not right,” I repeated.

“Well, there’s only one other thing I can think of,” he said,

So we stopped, Steve got out the tool kit and tightened another piece that secures the fork of the front wheel and lo…no more wobbles! Yay, I could ride on feeling like I would get where I needed to be, in one piece and not in a heap on the pavement from a bike falling apart around me!

We tootled along, on a traffic-free path, through a park and after the cold, grey morning, the sun began to shine and it took the edge off the chill. The galahs screeched and wheeled overhead and the sights and sounds were reminding us in no uncertain terms that we were back in Australia.

We joined the queue at the Spirit of Tasmania ferry, then were waved on in no time at all. We were given a spot for the bikes and welcomed on board by a very friendly lady who asked us about our travels and  told us about some backpacking she’d done in Europe.

“So you’re going to ride around Tasmania now are you?” she asked.

“No, just heading home,” we said. “Although we should see more of our own backyard,” I added.

“You should,” she agreed, “Tasmania is a beautiful place.”

Yep, we really should make the time to see more of our own state. I just wish it had those brilliant cycle lanes and paths that we’ve enjoyed in other countries so we aren’t just on roads, taking our chances with traffic.

We settled the bikes in, boarded and then settled ourselves in for a relatively smooth crossing, with just a few rocks and rolls. We arrived early into Devonport, under a cloudy sky and 9C, but straight away I can tell you, a Tassie 9C is definitely not as cold as a Melbourne 9C! It was quite bearable and just a nice crisp morning for a ride.

We decided to take a long way round getting home, to avoid riding up a main road, so we headed towards the water and pedalled along the cycle path beside the beach. A man and a woman were walking their dog and as we passed, they both gave us a smile and a “Good morning.” 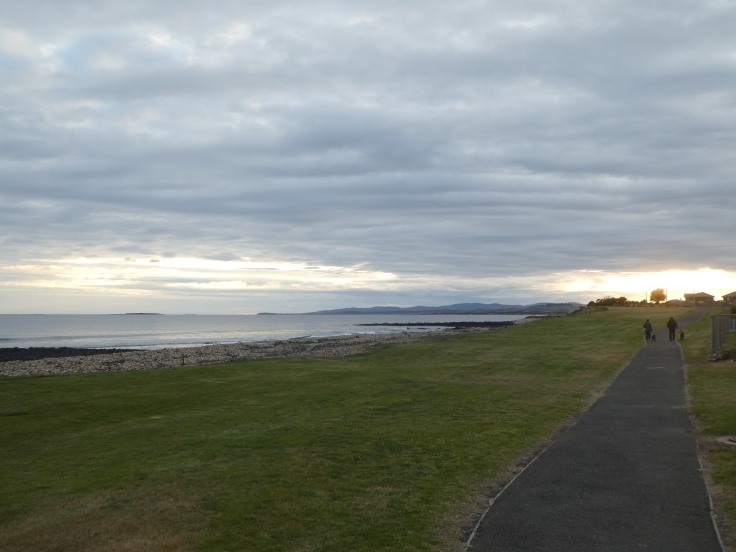 We headed onto a quiet road and then up a hill.  We knew there were some hills to deal with, we knew those hills well and Steve rode my back tyre, finding the going easy peasy on his nice lighter-load bike, while I just slogged away with my packhorse load. Still, we were in familiar territory and looking out to sea and across the paddocks and it was lovely.

On we went, along quiet back roads, with the birds twittering and warbling in the trees, passing paddocks we’d never seen so green, across to the blue hills and past the rich chocolate soil in perfect furrows. I’d been declaring the scenery in England “beautiful” and I had to give the same compliment to our own surroundings. 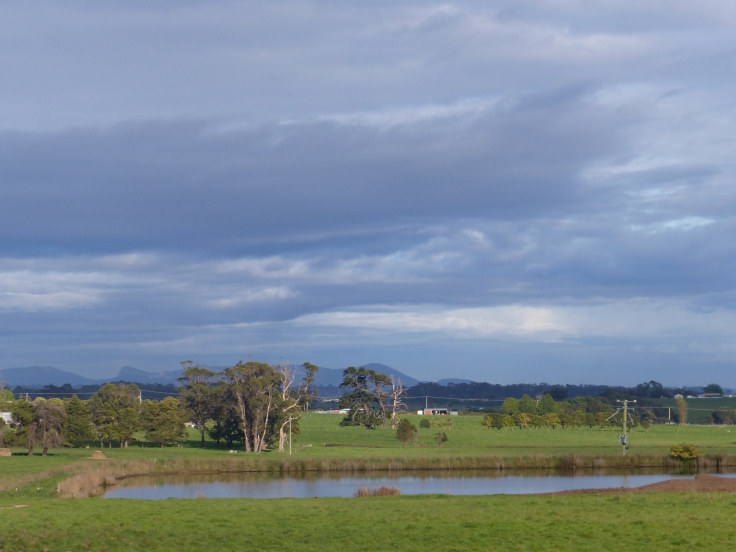 The sun had come out, burnt off the cloud and the colours of the landscape just shone. It was a top ride and even though we were on familiar roads, passing familiar scenery, it was like seeing it for the first time, in a palette that seemed new all over again. We passed a couple of cars and a tractor, with each driver giving us a smile and a full hand wave or the “Tassie wave” of two fingers lifted off the steering wheel and it was another sign we were home. It was nice to see that friendliness again and the thought that each of those people didn’t know who we were, whether we were locals or tourists, they just saw two people on touring bikes with a load, and gave a smile and a wave. It was nice to think that newcomers to Tassie would receive those friendly gestures too. The sun kept shining and then, with about four kilometres to go, it rained. Of course it did. Well, it was really a sun shower, because the sun stayed out, it just got a bit wet, but I thought that was perfectly poetic, we had to have one final bit of rain as a finale. We, the bringers of rain, ended as we began! 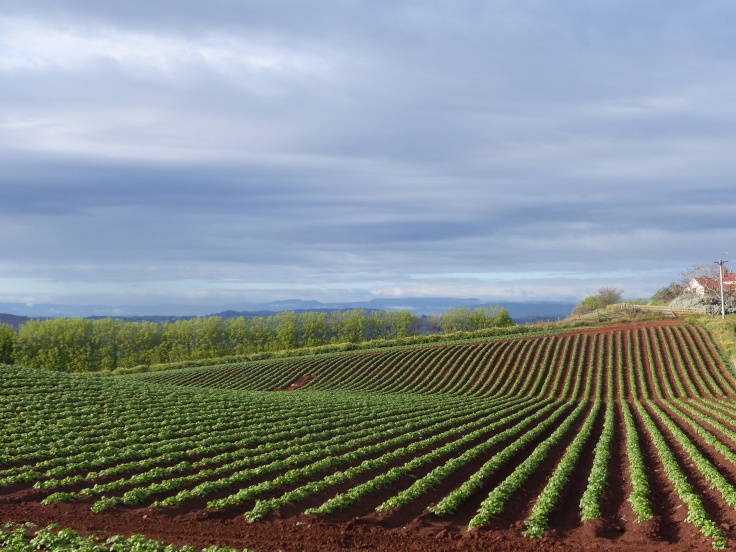 After a couple of hours on the pedals, through that glorious scenery, we reached our own quiet road, leading to our own little street, nestled amongst the gum trees. Our parents were waiting for us, with a ‘Welcome Home’ banner and waving the “Boxing Kangaroo” flag. Hugs were exchanged and relief that we were back safe and sound and then we enjoyed a morning of multiple cups of tea, exchanging stories from home and abroad. It was good to be home. So there we are. Tasmania to Croatia to Slovenia to Italy, back to Slovenia to Austria to Germany to Switzerland, back to Germany to Denmark, back to Germany to The Netherlands to England to Ireland to Wales, back to England to Singapore and back to Tasmania. Six months on foreign shores and on two wheels, pedalling our way around, with the occasional assistance from a train or a van. What an amazing experience. What lucky and grateful people we are. What life long memories we have accumulated and stored, to reach for whenever we want to revisit our joyful journey. I can honestly say I loved every bit of it. Every single second. There were some challenges, but being in amazing places, seeing fabulous sights and meeting wonderful people, made every single moment, nothing short of precious, glorious and all round simply brilliant. I am just hoping now, to do it again! Where? I don’t know, but just doing it, wherever it may be, exploring new places, learning new things and experiencing new and different cultures, ideas and ways of life, is just the most fabulous thing. Doing it on a bike is a great way to fully experience it all, all senses heightened and employed, in amongst it and getting to places we would never see or experience in a car. Those faithful bikes have given us golden moments. My final word goes to you, dear readers. Thank you for reading. Thank you for travelling along with us and joining us on our latest Grand Tour adventure, it’s been wonderful to have you along for the ride and I’m sorry we got you lost a few times! Here endeth the blog posts for a while, until we find ourselves on new adventures, travelling new trails and seeing new sights. I, for one, am hoping that will be very soon, very soon indeed! Cheerio from Tassie, it’s been a blast. Run, ride or roam my friends, oh the places you can go and the things you can see! Something amazing could be just around the corner!

Time in the saddle: 1 hour 53 minutes

Weather: Cloudy and 9C, then sunny and 11C, then warmer as the day went on!