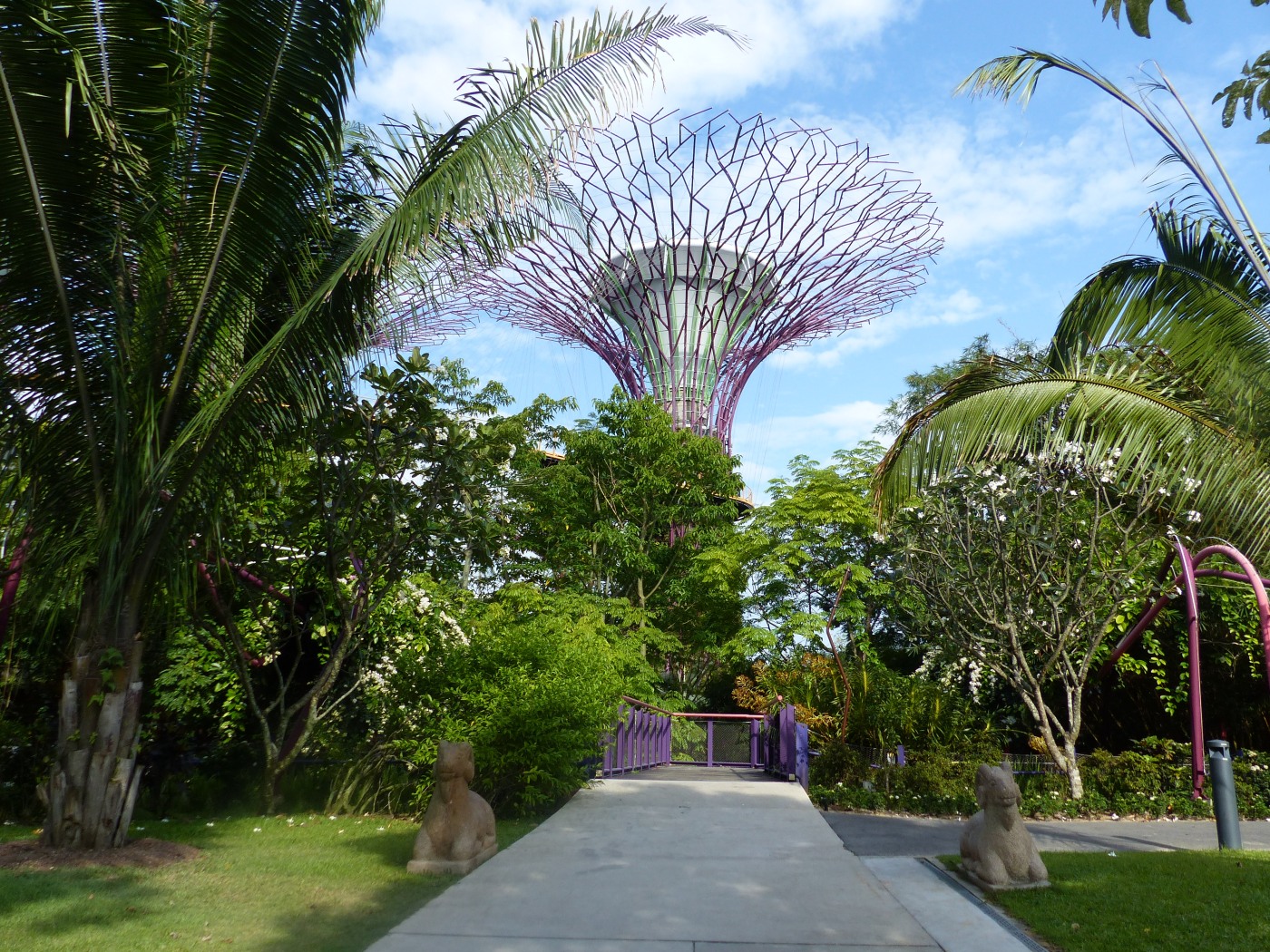 “You’re looking very red,” I commented to Steve, as his nose, cheeks and chin seemed to emanate a very rosy glow by the end of this afternoon.

“I’d never get tired of this heat,” said the happy roaster, as he contentedly cooked under the solar grill above.

The Big Fella had finally found his meteorological sweet spot. After leaving the growing chill of England, he was now basking in the thirty-plus degrees of Singapore and he was a happy chappy indeed.

We made our way through Changi airport this morning, in search of the baggage storage location, where we could free ourselves of non-essential bags and bikes for the next few days. We walked to the terminal and began looking around for signs, when a gentleman in a suit and airport badge approached us.

“Do you need some help?” he asked.

“Oh, baggage storage, come this way, come with me.”

He walked alongside us, guiding us through the building.

“Where are you from?” he asked.

‘TASMANIA! I love Tasmania! I have been there. We went to Melbourne and Tasmania. It’s very beautiful, I loved it.”

That was how we met Simon Tan, such a very friendly, very helpful, very chatty man, who gave us a personal escort to the storage desk and asked nothing in return but for us to tap on his device to leave some feedback about his service. “It will help our company,” he explained. He was happy with the response, because he bowed to us, thanked us profusely and wished us well for our stay.

After leaving our big items in storage, we set off to catch the train into the city. On the way we passed the amazing Rain Vortex in the airport. This huge feature is a massive waterfall of water falling from a glass ceiling and into a seemingly bottomless cavern in the floor. Very impressive!

We found the train and as we were waiting, Simon Tan came past, helping an elderly lady. He saw us, waved frantically, “Hello! Hello!” then left the lady where she needed to be, walked past us, gave a bow, another big wave and a “Bye! Bye!”

So far, everyone we’ve come across in Singapore has been off the scale friendly and helpful!

An easy train trip from the airport and we were in the city, where we walked to our hotel, who continued the theme of friendly and helpful by checking us in three hours early, which was very welcome and gave us a chance to have a cuppa and get our bearings before setting off for a roam. Walking from the air conditioned hotel, into the outdoors, was a step into a fan forced oven. HOT! Very nice though! We decided just to freestyle roam, to see what we could see, with no real plan. Just pure freestylin’. Just down the street from the hotel, we passed a Chinese style building and stopped for a look. 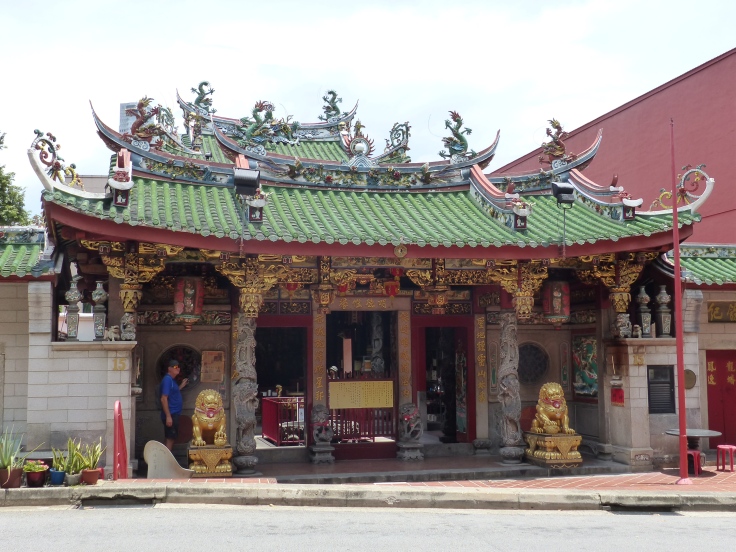 “Come in, come in,” beckoned a small, elderly man with a gorgeous crinkled face and beaming smile. “Welcome, welcome to our temple, please look around, take pictures. Bless you, I wish you much happiness and health for your future. Please, walk around and look, you are very welcome.” The friendlies just kept on coming!

We strolled around what we now knew was a temple and I read some information as we went. I discovered we were in the Tan clan temple, a 143 year old building. They are trying to raise money to restore it and they hope to encourage more visitors, because they only attract a few people each day. It was built for any member of the Tan family to worship in, but was then opened to all Chinese worshippers of all three religions, Buddhism. Confucianism and Taoism. Apparently, in its heyday in the 50’s, up to a thousand people used to cram in there. It’s now open to the public, without charge and was a lovely, traditional, authentic piece of Singapore to stumble upon, welcomed by another very friendly face. 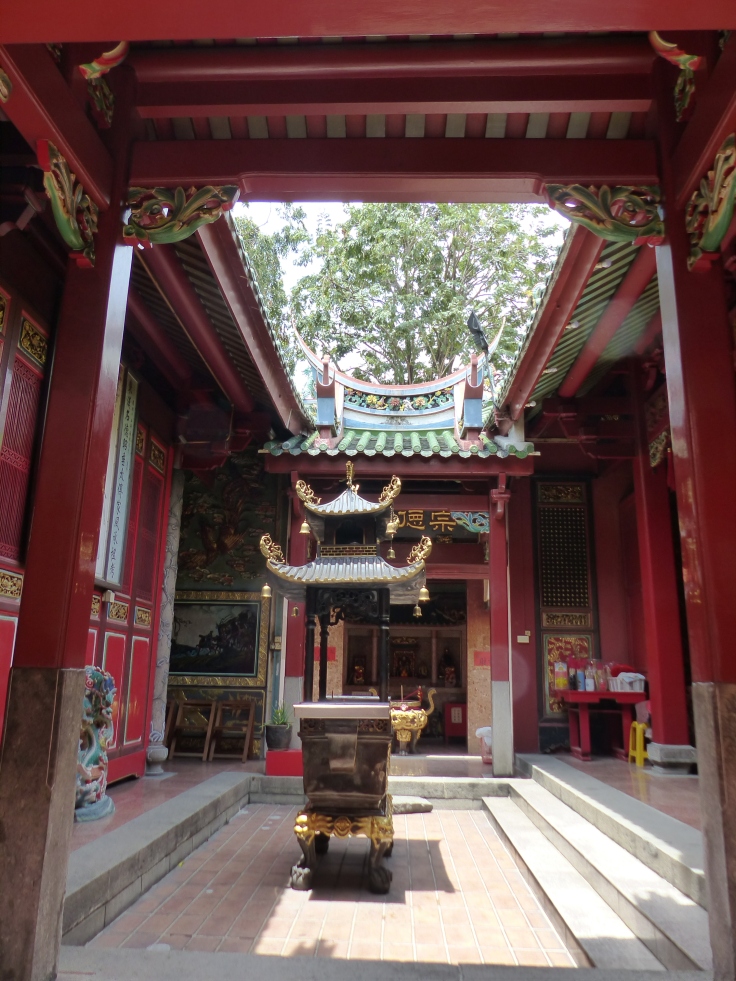 We stopped for a bite to eat and enjoyed a very tasty lunch at a vegan cafe. I had noodles and vegetables in a delicious savoury broth and Steve had a pumpkin pasta and we were recharged and ready to go again.

We made our way toward the marina, passing through a tunnel that was lined with murals, telling the story of Singapore. I learned that Sang Nila Utama Srivijaya, a prince from Palembang, legendarily founded the Kingdom of Singapura in 1299. While out hunting, he saw a strange animal with an orange body, black head and white breast. What he thought to be a lion, was probably a Malayan Tiger, but he named the island “Singa Pura” which means “Lion City” in Malay, from which the name Singapore was derived. The things we learn just roaming around!

Down by the marina, we saw the fabulous skyline of the city and walked past the contrast of the modern and the colonial, with buildings that gleamed in their modern day finery and others that were beautiful with historic, old world charm.

We passed by the Merlion, a symbol to welcome all visitors to Singapore, past the Fullerton Building, which was once the Post Office, then alongside the water with the Marian Bay Sands luxury hotel in the distance with its “boat” on the roof.

We then came upon a small memorial which was established to mark the releasing of Gandhi’s ashes at that spot. Apparently Gandhi’s ashes were taken to several places, as a mark of his global appeal and the impact his cause and voice had around the globe and one of those places was here in Singapore. From there we continued along, beside the water, in the roasting heat and then saw what I thought was a brilliant gadget. Above us, we saw three big towers, each housing a huge fan.  These were “Breeze Shelters” and were solar powered, with motion sensors. They provided a comfortable place for visitors to pause, sit and enjoy a cooling breeze from above. I noted the sign explaining them mentioned “visitors” because I guess all the locals are fully acclimatised to living in an oven and it’s only visitors like us that wilt!

Our roaming took us to the Gardens by the Bay and this was another amazing place to find. We strolled across the river, then through the gardens and into the towering Supertree Grove. 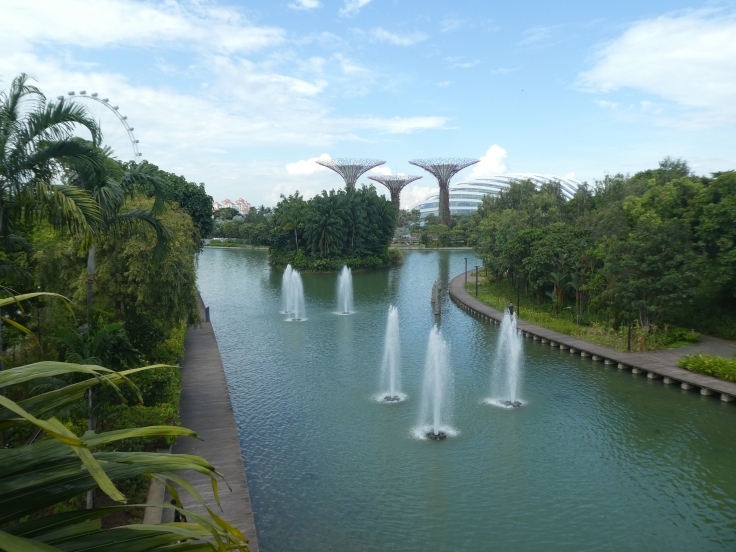 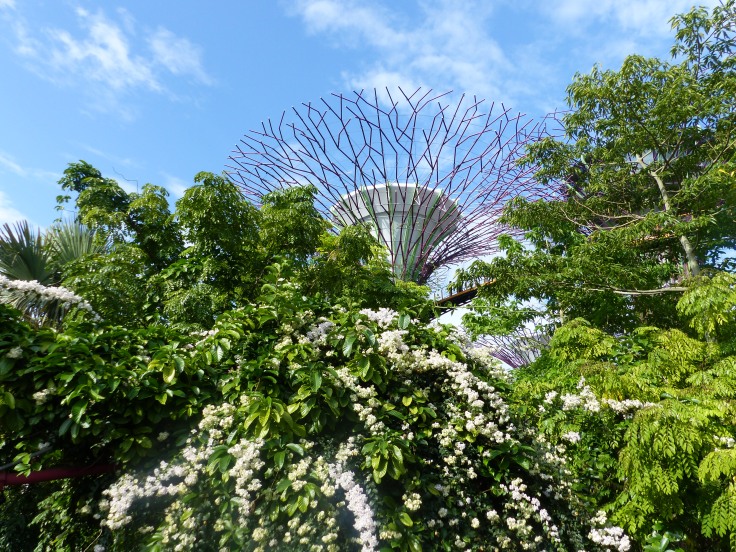 These “trees” are designed to reduce carbon emissions and the entire Gardens themselves have been built using green materials from recycled concrete to carpet made from recycled materials. The soil used for the plants has been mixed with ash from the Garden’s Biomass Boiler, which runs on the remains of the trimming and pruning that’s done to Singapore’s three million trees, which produces 5,000 tonnes of pruned branches. It was an incredible design and wonderful place to stroll through.

After gathering a small stock of supplies, we called it a day, or rather an evening, because our roaming had gone on quite a while and for about 12 kilometres.

“I like Singapore already,” was Steve’s assessment at lunchtime.

It has been a very nice place to explore so far, with interesting places to find, a relaxed pace and that ever present heat. Not to mention the super friendly people, that always make a place extra special. Our roaming will continue, as we tootle our way around parts of this small island. We will adopt the local pace though, unhurried and laid back and just see what awaits us. Another lovely place to find ourselves, with wonderful places and people and that warmth, in more ways than one. Lucky people are we. In fact, Steve is positively glowing. Watch out Rudolph, there’s another nose in town!