The day began by delivering us 34 km/h winds. Oh, isn’t that something to look forward to when we get on the bikes! “At least it’s not raining,” said Steve as he looked out the window. We packed up and retrieved the bikes from their spot in the office, then wheeled outside and…rain. Oh joy, rain and 34 km/h winds. What a ripper start! We pedalled off, onto the same path we rode in on yesterday and that bit was great, riding through the trees again, traffic free. 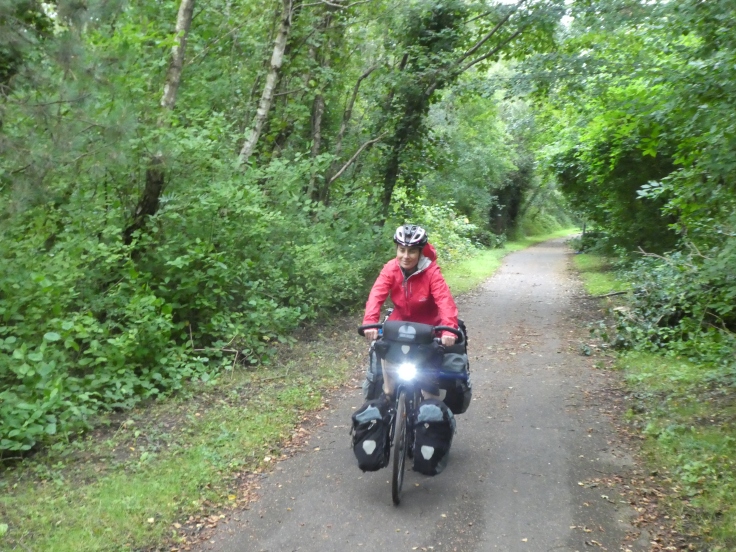 Our quiet path soon ended and while we remained on a cycle path, it now ran alongside a busy road, then a highway, then a fair dinkum motorway. It was noisy and in the rain, even louder. On we went, being buffeted this way and that by the wind, although there were times when it was behind us, which was fab. We were following one of the National Cycle Network routes, so you’d think that would be pretty fool proof as a route to follow. Weeelll…we had a sign pointing us along a path to the right, so we wheeled along, turned right and…

Hmmm, obviously that’s not an option! We’re getting used to unexpected path impediments though, so we rerouted and tootled on. We were still beside the busy motorway, so it wasn’t very scenic, in fact it wasn’t scenic at all, but it was still on a cycle path, so we weren’t in amongst the traffic, which was very welcome. Then over a bridge we went and on into some neighbourhoods.

The rain eased, so we pulled over into a bus shelter and stripped off our coats, which were keeping us a tad over warm. On we went and we hadn’t gone a hundred metres up the road when down came the rain again, heavy and sideways. Screeeeeech…we hit the brakes, grabbed the coats again and slicked up. Pedal…pedal…pedal we went, …swerve…swerve in the wind, …drip…drip…from our helmets with the downward and sideways water. We came to a tunnel and stopped for a moment of shelter. It wasn’t really easing, so it was just a matter of… get on with it! Deal!

Our path turned away from the busy highway and for a moment I thought we were going to get a coastal ride. We came upon the beach with a nice wide promenade above it. We stopped to look up and down the sand and man-o-man that wind was howling. It was already a mighty blow, but straight off the sea, it was really firing.

We had the promenade to ride along, but the wind had obviously deposited a pile of sand across the path. With all the rain we’d had though, it looked nice and wet and Steve must have thought as I did, that it would be pretty solid and packed to ride through because he didn’t slow down, he kept right on with his speedy, wind assisted pace…THUNK…STOP. He rode into that sand and came to a rapid, bogged halt. It might have been wet on top, but dry as can be underneath and it grabbed hold of his wheels and buried them. The bikes weren’t going anywhere in that, so there was nothing for it but to get off and push. Steve pushed his load through and then I brought up the rear.

My hopes of having a coastal ride faded, as the path again took us through some run down back streets and then back to the side of the busy highway. We had to get to the other side of those four lanes and thankfully a bridge presented itself, to take us up and over. 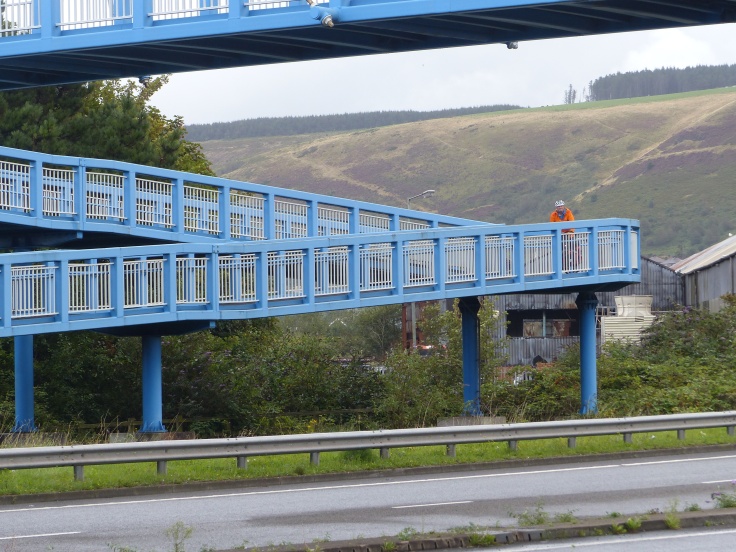 The rain eased enough that we could start looking for an elevenses spot. We saw a seat that looked reasonably dry, beside a railway station and declared it good enough for a stop.

So far, on the list of items that our first ride back had delivered to us, we’d had rain…wind…a blocked path and now we had…an elevator!  It started with another blocked path, with a fence across the path that had once crossed the railway line. That way across was no longer there and a fence made that very clear. The only way across was an elevator! Well, I hadn’t been expecting that, since we had no intention of navigating a train station today. But, yes it was so. We had to use the railway station footbridge, which meant taking the bikes up in an elevator, across the footbridge above the railway line and then an elevator back down again. Just goes to show…a ride can throw anything at us!

“I’m going to do it,” I called to Steve, as I slowed to a stop, “I’m going to risk it.” I gave Nora a rest and took that coat off again, with as much optimism as I could muster, that the rain had done its thing and would now leave us alone. Steve gave the Orange Wonder a rest too and we pedalled on, one layer down. Then the path beside that busy road took us onto a road, but this time it was an improvement. We rode up a quiet country road with hedges beside us and then onto a path through some trees. Then…item number six presented itself. One of our favourite barriers, the slanty sort that we have to squeeze through. Squeeze we did and pedalled on. Some hills came and went, although they weren’t big bad hills, just some lumps along the way, just enough to wake up the legs and lungs after their van-induced slumber.

The path came out on a road and as we started to roll down a hill, we spotted a table beside some trees and decided it was the best offer we’d had as a place for lunch, so we pulled in and parked ourselves. So far, our list included rain, wind, blocked paths, some hills, an elevator and barriers. The last 10km though gave us some new items to add to the list and they were fabulous.

Check. Check. Check. Check. Add those to the list for sure, they were very welcome indeed. The clouds parted and the sun came out and it wasn’t a wimpy post-rain sun, it really had some warmth in it. Lovely. Then our route took us along a lovely path, all traffic free, with trees beside us.

As we pedalled along, we discovered we were riding through the Parc Slip Nature Reserve and learned some of the stories of Parc Slip’s past. Right up until the 1980’s the area we were riding through had been mined for coal, and Parc Slip’s coal mining history went back to the 19th century. Then, in 1892, disaster struck, when an explosion occurred in the Parc Slip Colliery, killing 112 men and boys. As we rode through, we saw evidence of the stories from the past, with an old coal wagon beside the path, wooden carvings telling something of the area’s story. One was of a horse, to show the role they played in hauling the coal wagons. Then we passed the memorial to those who lost their lives in the explosion. A stone memorial sat just off the side of the path, constructed with 112 stones, each one representing a life lost. It was a simple, but quite powerful reminder and memorial to an event that is clearly still thought about today.

The path continued to be a fantastic place to ride. We had the trees to ride through, we had some fields beside us giving us changing scenery and the sun continued to shine. Our list of things our ride had thrown at us continued to grow and the latest items were highlights of the day. 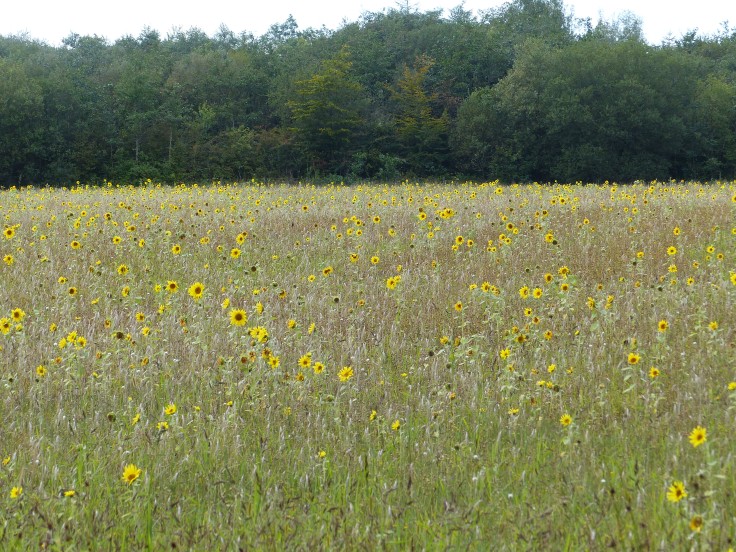 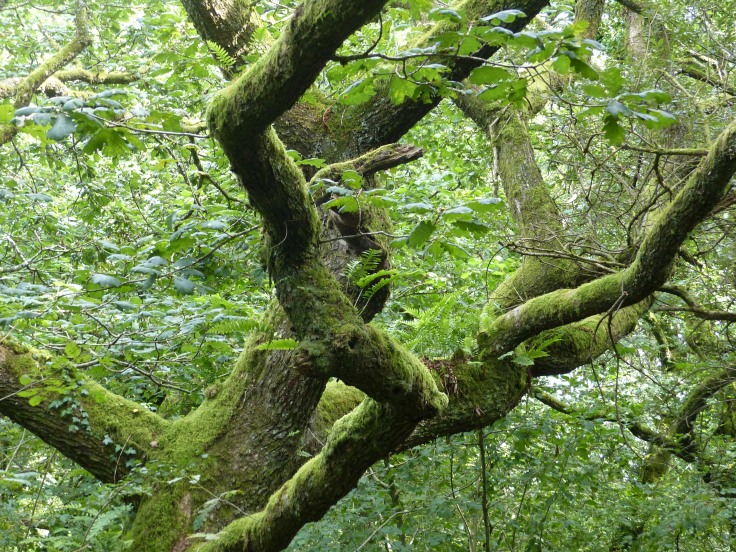 The path took us into the outskirts of Bridgend, where we found somewhere to stay. We finished drying off, had a post-ride cuppa, went for a walk to find some supplies and called it a day. Day one of being back in the saddle after our hiatus and the route and the elements gave us a list of little challenges, just to remind us of what we’d been missing.  Despite the rain, the wind, the none too pleasant path beside a motorway and some other little tricks along the way, we ended up with a top ride along a great path, in sunshine and past some interesting pieces of history. That added some gold star items to the list. It was fantastic to be back on the bikes, travelling in amongst our surroundings again instead of seeing them whizz past. We’re back in the saddle, with the open road before us ready for whatever awaits…discoveries, adventures, tricks and treats…Fabulous! Put those on a list and may it be a long one!

Time in the saddle: 3 hours 37 minutes

Weather: well, I think I’ve bored you enough with details about that! 18C