Unhurried, no rushing, no place to be, no jobs to be done, no great distances to travel. That was today. It was nice to do everything at a gentle pace, not have to spend too long in the van and just go through the day at a more chillaxed pace.

I set off for a morning run, along the road and beside the Bay. The sun began to peak over the horizon and the aroma of seaweed wafting across from the water gave the nostrils the wake up call they needed for a few morning K’s.

We packed up at the easy pace that was to be the speed zone we stayed in all day, then hopped in the van for a later than usual get away at 9:00. We discovered another Greenway not too far away, so aimed the van and headed off for another pedal along a one time railway line. This Greenway runs beside the old Midlands Great Western Railway Track and is a 42km point to point path. We decided to do what we’d done in Waterford and pick it up at one section and do an out and back ride.

We pulled into the car park, at the middle section of the path, in the little town of Moate. We were just shy of elevenses so decided, as a relaxed, and bordering on refined, treat we would partake of our routine in a little cafe in the town.

A very civilised elevenses complete, we set off on the bikes along the Greenway. This was another fantastic place to ride. It was flat and sealed and the sun shone and we continued our relaxed day, with a very pleasant, gentle tootle along. 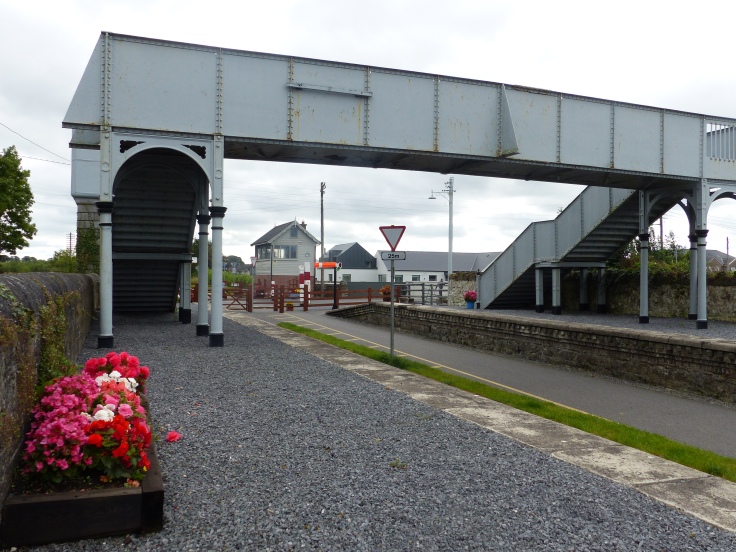 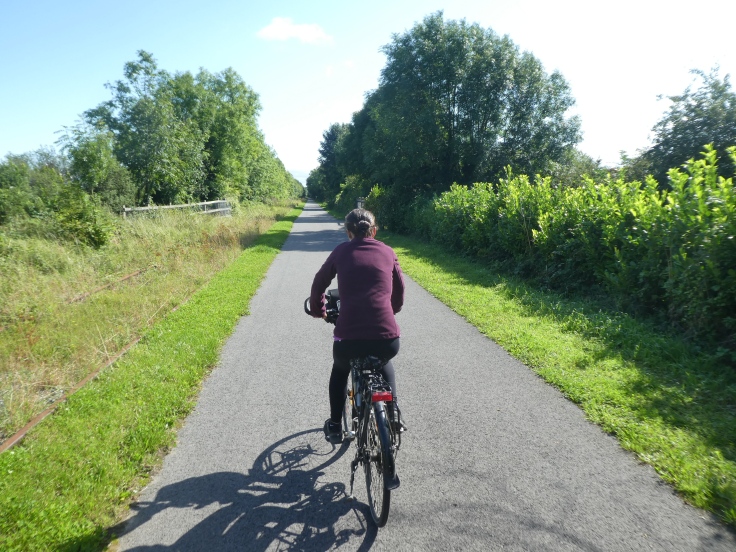 There wasn’t as much to see along this path, there were no ruins or castles or historic sites to stop for, but we did have railway arches to ride under, countryside and farmland beside us and the old railway stations to pass by. It was also nice to see the old, original rail lines running beside the path. 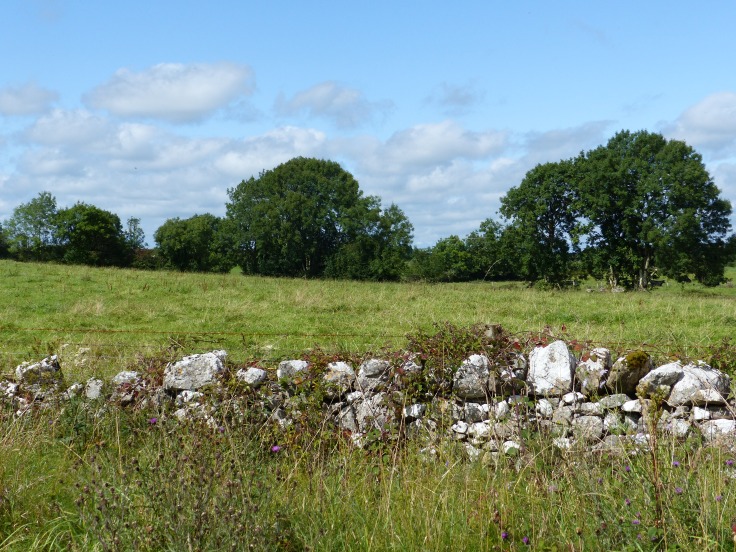 It was a perfect, sunny, relaxed ride and it was even warm enough to eventually shed a layer and ride in t-shirts and we haven’t been able to do that for a while! With the sun shining, it added to the casual tone of our “Mellow Monday.” 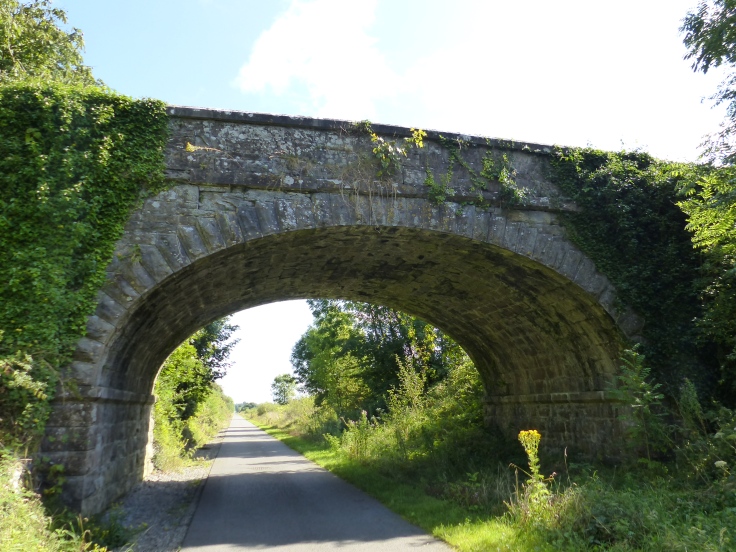 As we rode past one of the former stations, an outdoor museum had been set up on the platform, displaying old farm equipment. It was quite interesting to see some of the things they used in the past and those that were horse drawn. Something I’d never seen before and seemed quite niche for such a big and quite cumbersome looking piece of equipment, was the “Beet Hoe and Grapper’, which was used to clear the ground between sprouting shoots to help keep weeds under control. Someone, at some time, obviously thought very highly of their beets, to invent a piece of equipment such as this and name it for that specific crop. It looked more like something that would flatten little plants than help them grow, but then…I know nothing about these things!

We continued our leisurely pedal, passing more old stations and then turned around for our ride back. We had the head wind on the return this time, but happily took our time, just chillin’ as we choofed along. 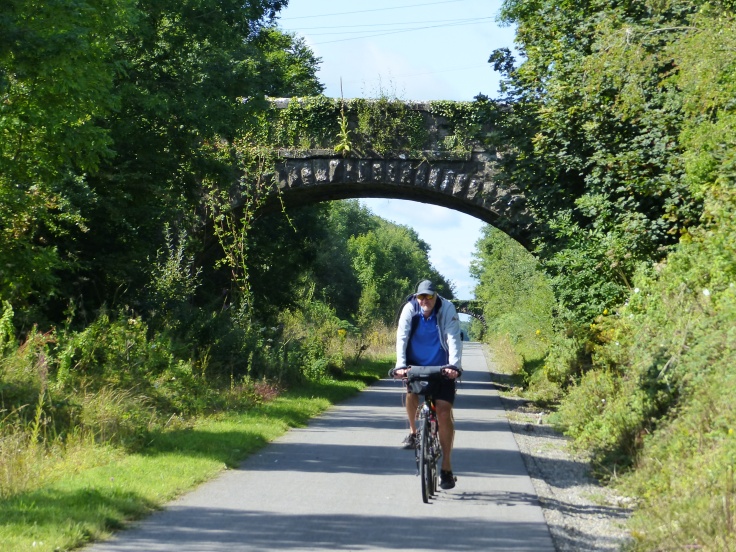 Arriving back at the van, we loaded the bikes and set off to find a suitably relaxed place for lunch. We came across a park and found a table tucked away in a little garden and settled in for a leisurely lunch. The park had some ‘Art in the Park’ that we wandered past as we left. 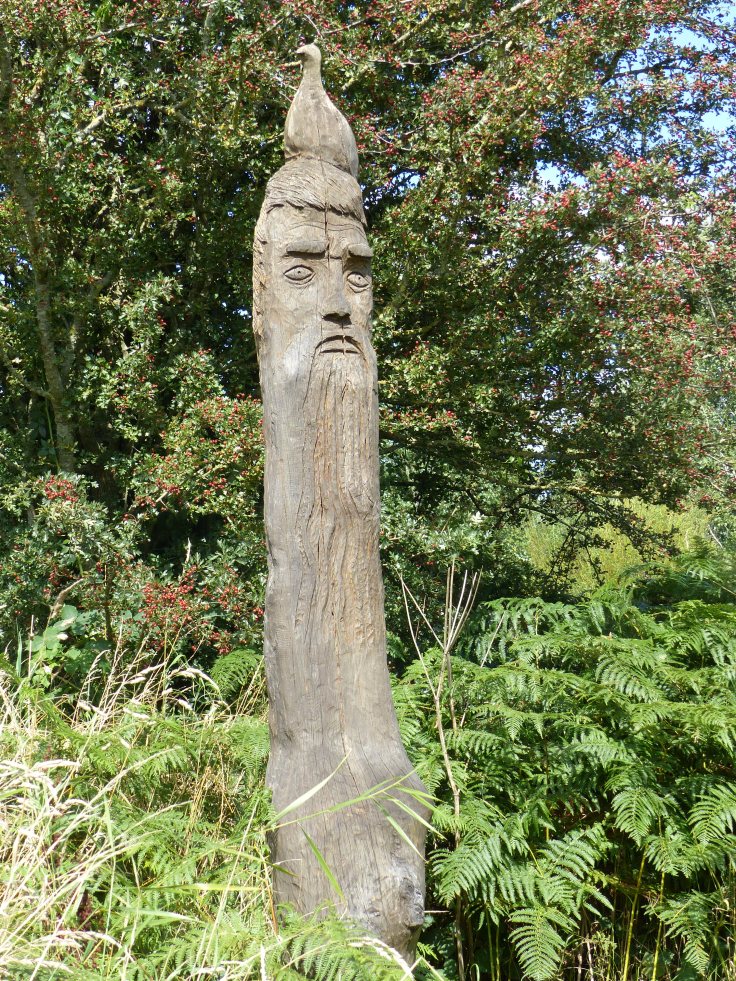 Time to find some digs, so we set off along the motorway, to the town of Athlone, where we found ourselves some lodgings. Athlone is actually the dead centre of Ireland, being right near the geographical centre and a five hour drive from any point in Ireland. After a cuppa, we headed out to gather supplies and have a look around the town. We walked past the old Workhouse and graveyard, that was a reminder of the devastating impact of the Great Famine.

We found Athlone Castle, that stands right in the centre of town. It was built in 1210, badly damaged during a bombardment in 1691 and then, in 1922, it was taken over from British forces on behalf of the Provisional Government. 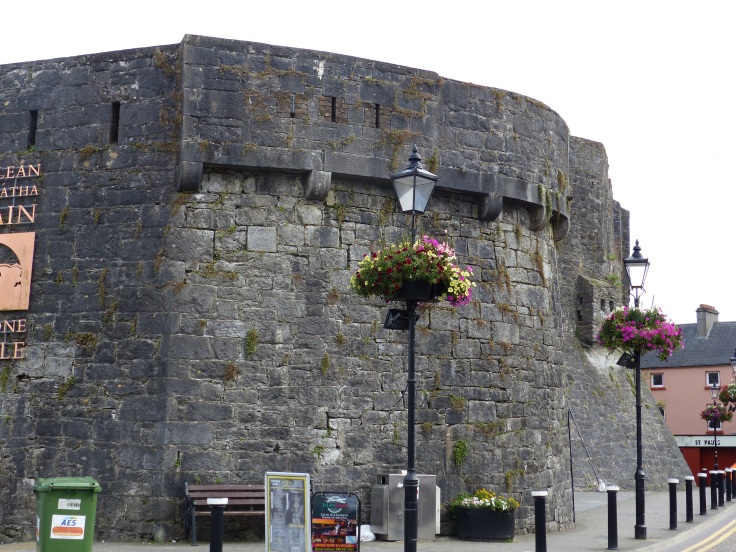 Then an easy stroll through the streets, supplies gathered, we roamed beside the river, where we saw that the birds in town seemed to have set their own trend. Who started it? The pigeons or the gulls? Who copied who? Looking up, we had a perfect line of pigeons along the wire and then looking out across the river, we had a line of gulls, perfectly balanced on their floaties. Or maybe we just walked into Round One of the Bird Balancing Olympics or something. 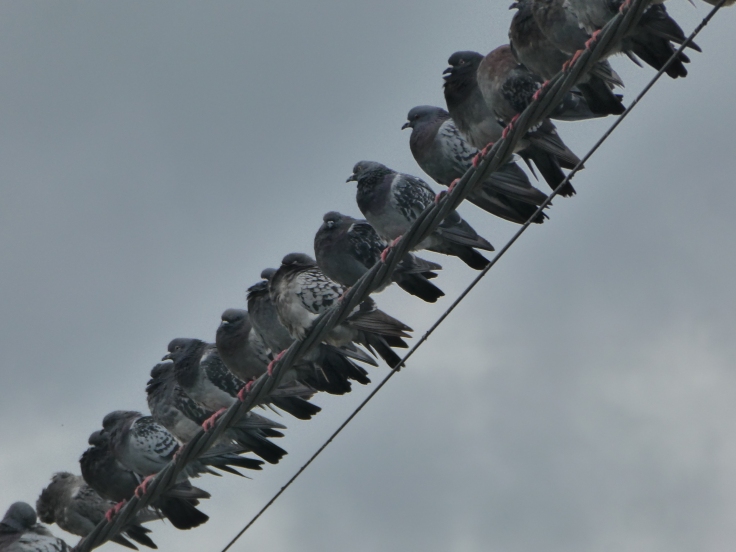 That was our day. An easy one. A relaxed one. An unhurried one. Getting to and from the National Park yesterday had us spending a fair bit of time in the van and while it was absolutely worth it for the fantastic climb we did, we were ready for a day out of the four wheels and not having to get anywhere in particular. It was a terrific ride along the Greenway and was made even more brilliant by the brilliant sunshine we had. It was also a day where I achieved a rare trifecta…run, ride and roam all in the one day and in that order. Extra bonus! Our days in Ireland are drawing to an end, but we aren’t going to rush, we aren’t going to hurry, we are just going to take each day as it comes, with whatever it delivers for us. Anything we get will be very welcome! So, after a “Mellow Monday”, who knows, we might just follow it up with a “Chillin’ Tuesday’. Sounds fine to me!

Time in the saddle: 1 hour 36 minutes

Weather: sunny most of the day…fabbbo! 19C