We used a bus to get us started on our exploration of Belfast, so we could get the lay of the land, see beyond the city centre and see what was there that we might like to return to and explore further. I’m sorry to say we didn’t find anything. How would I describe Belfast? Well, it’s a city most definitely, in every sense of the word. It’s “gritty”, yes. Is it scenic? Umm, no I don’t think I could say that. Is it beautiful? Err, no, no, I don’t think I could give it that badge at all. Is it an interesting city? Yes, I’d say that. After getting an overview by bus, we took to our feet to have a wander around. I think it was Barack Obama who called Northern Ireland, “the blueprint for peace” and I can definitely see where that comment came from. The Good Friday Agreement was signed in 1998, essentially bringing an end to The Troubles, yet today the divisions that contributed to that conflict are still very much front and centre everywhere you look. As we went through Loyalist areas of Belfast, there were Union Jack flags everywhere and signs, murals and slogans reminding people of those who had been killed, with words such as “still no truth, still no justice”. Pro-British sentiment was everywhere and flags and signs of the Ulster Freedom Fighters were still very front and centre. Just up the road in Nationalist West Belfast, the opposite could be seen. The Irish flag was flying and there were slogans, signs, murals and memorials about republicans who had been killed and denouncing British involvement in Northern Ireland. We noticed it yesterday on our day out too. Driving through Bushmills, there were Union Jacks everywhere and then 60km up the road in Londonderry, there were still IRA slogans on walls. The fact that this sort of sentiment is still visible to one and all, as a reminder of the divisions, yet peace remains, is a testament to the people and Northern Ireland more generally I thought. It’s as if those visible signs and symbols, while displaying current sentiment, are also reminders of a period that people don’t want to return to, rather than them stirring up the issues that created the conflict in the past. That, I thought was really interesting.

We roamed out to CS Lewis Square. CS Lewis was born in Belfast and this square has been created as a public space with performance areas and cafes. There are seven sculptures of characters from the Narnia Chronicles and we walked around,  finding Aslan, Mrs and Mr Beaver, Mr Tumnus, Maugrim the wolf, The White Witch and The Robin and then the sculpture of CS Lewis himself, which was a wonderful design. Called The Searcher, the sculpture is based on the character Digory, from The Magician’s Nephew, who made the wardrobe from an apple tree that had magical properties that helped open a doorway to Narnia. 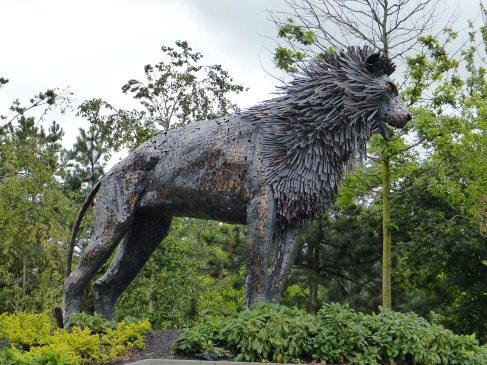 Then we simply roamed, along the streets, past some buildings that were again, a reminder of the city’s difficult past, through the areas that really needed some TLC and then into the modern shopping strips. It is a city of contrasts, with areas still showing evidence of the past and other areas very much embracing the new.

So that was our day. A day of exploring and finding it a little tricky to discover the shiny side of Belfast. Or, maybe there isn’t one, and that in itself, gives it its own special identity. The difference, the contrasts, we see as we travel, that’s what makes the experience so amazing and such a learning experience too. We commented again, as we walked along, on how lucky we are. We thought of the places we’ve been like Croatia, Slovenia, Germany and here in Northern Ireland, that have suffered conflict or war and gave a thought to how lucky we have been to have always been able to walk in peace in our home. Travel like this helps us to always be grateful for that and never take it for granted. We walked along the street today, imagining what it would have been like to have to wonder about every parked car, or to have fear sitting on our shoulder all the time. Like Barak Obama’s comment about a “blueprint for peace”, walking around today showed how a place can keep one eye on the past, while also having eyes front and moving on to a different future. A beautiful city? No, I couldn’t call it that. An interesting, almost inspiring city? In many ways, yes I could say that.  A city worth the visit? Yep, for sure.

Weather: rain on and off all day, not cold though, 19C

4 thoughts on “Searching For The Best Of Belfast”