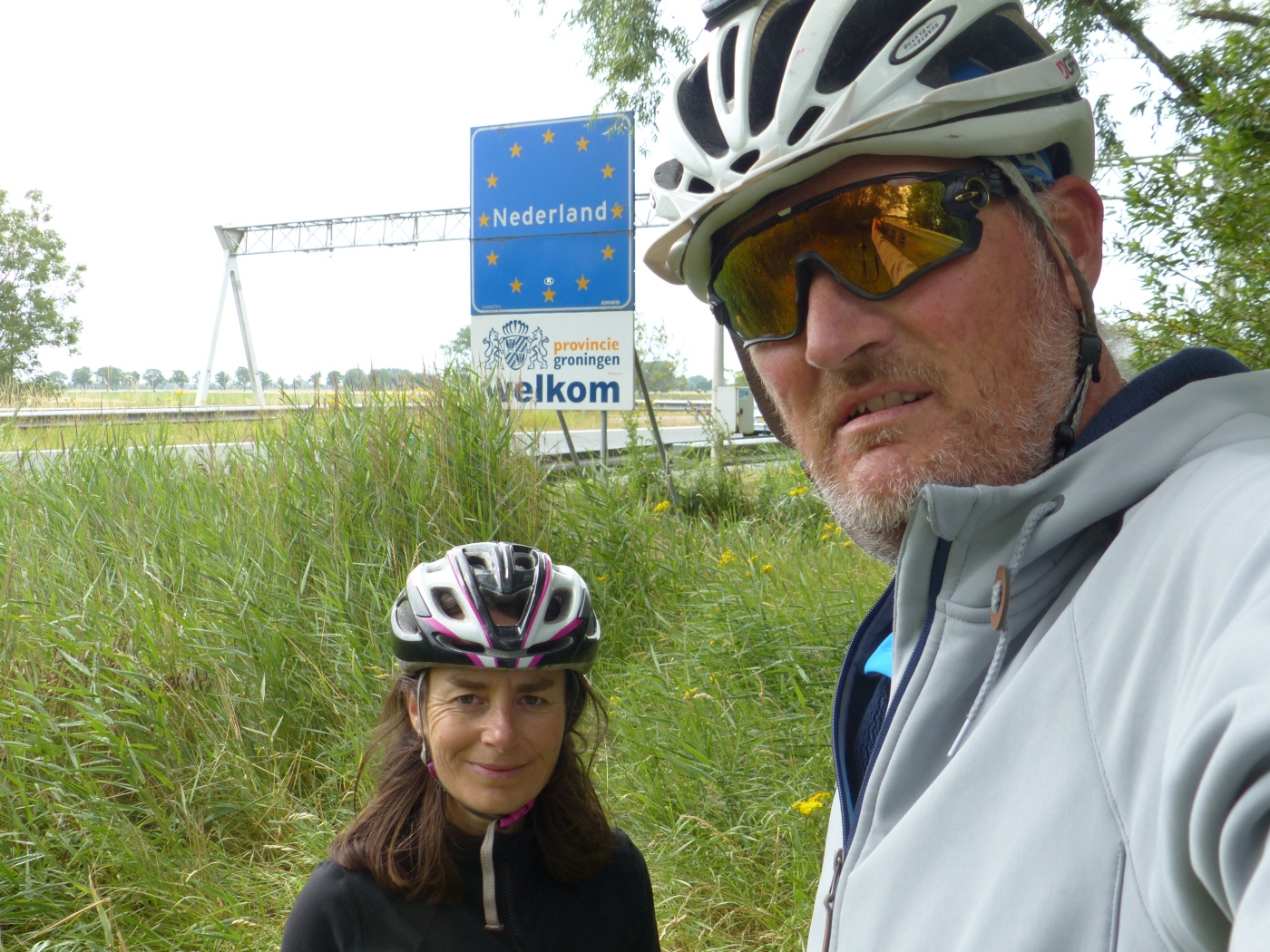 And just like that, we left Germany and found ourselves in The Netherlands. Another country. Another language. Another adventure.

We packed up and prepared to leave Bremen, lugging all our panniers down to the bikes waiting in the underground car park. It’s no wonder we get surprised looks when people see us. If you saw someone with that much luggage walking into a hotel, you’d look sideways and probably think they were moving in or had failed the first lesson of Packing Lightly 101, but believe it or not, that’s what we carry on two bikes and absolutely nothing is surplus to requirements!

We’d looked at the weather, that factor that is so influential in what we do when travelling on two wheels. The weather said wind again. No surprise there. We had planned to head north-west, towards the Dutch border. The wind direction was…north-west. That would mean riding into another jet force head wind. Ummm, nah, we’re a bit over that. Wind is one thing, that’s pretty much unavoidable, but if we can avoid the full in the face variety, we might try to do that. So today, we adopted another ride-rail strategy. We took to the rails to skip along a bit, avoid the worst of the head wind and get us north-west, then hop on the bikes and pick up the ride from there, so that’s what we did.

We set off for Bremen Station, wheeled in, zoomed up the elevator, wheeled onto the train, which was a bit of a doozy for our final German rail journey. The German trains have been great, just wheel on and wheel off, but this one had steps up into it, then more steps once we were on, down into the bike carriage. Go figure! There was also a tiny, teeny weeny little space beside the entrance to the carriage that we could just squeeze the bikes into, which we did, so as to avoid getting them down the internal steps. Then we sat for the short, hour and twenty minute choof up into the wind and then wheeled off, up and down some more elevators and we were out into the streets of Leer…in the cold…and the rain! Oh well, it’s not as if we aren’t used to it.

We pedalled along and searched for a reasonably sheltered and reasonably dry spot to have elevenses before pushing on. A little park became the elevenses location for today, on a damp but not soaking bench.

Then on we went, through Leer and out onto the open road to ride out of Germany and over another border. Leer was a lovely little place, as we pedalled by the river and through narrow lanes, beside lovely houses and along the cobbles. They were very pretty little streets to ride through.

Out on the open road, or path beside the road as was the case, the wind was its usual pushy self, but at least it was a cross-wind and not head on, so we’ll take that. The rain stopped, so that was also a win, although the clouds were there, looking ominous and hanging around with a scowl, waiting to pounce. 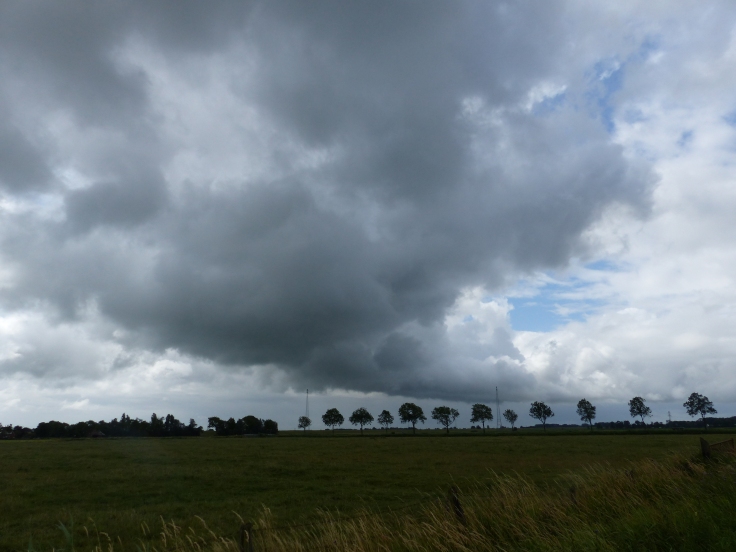 We stuck to the road most of the way and then rode through a small town, where we had a final encounter, that just summed up the sorts of experiences we’ve had with people everywhere we’ve been. It involved a toilet, but it’s worth the telling, just to illustrate again, what wonderful people there are around. Steve was in search of a public toilet, so when we rode through a small town and saw a WC sign, we followed it down a road, into what looked like a sports complex. We pedalled around and couldn’t see anything that looked like the requisite public convenience. A lady came towards us, walking her dogs and spoke to us. After our usual script, apologising for being Australian and speaking English, we simply said, “Toiletten?”

“Ah”, she said and pointed along the end of a building. “There is a cafe with toiletten, maybe they will be open. I will look for you, walk with me.”

Then that kind lady, with her two boisterous and smiling dogs, walked ahead of us to a row of doors along the outside wall of a cafe near the sports centre. “I will look for you,” she said again, as she began walking the length of the building, trying the doors. They were locked. Then, she tried another one, it opened and all we heard was “something, something, something, Australian, something, something, tourist, something, something, pee-pee, something, something..”. That wonderful lady had spoken to the caretaker/groundsman of the complex and asked him to open the toilets for us. He came out of his little shed, with keys jangling and opened up the external doors for us. We thanked the lady many times over.

“Have a good holiday,” she said with a parting smile and wave.

Before we left, we knocked on the door of the little shed, poked our head in and thanked the groundsman for going to the trouble of unlocking the facilities for us and we could pedal on. A final encounter with friendly strangers before departing Germany, but that my friends, is what happens all the time. So often we have been approached by people willing to talk, stop for a chat or offer help. It has been absolutely wonderful and it has happened everywhere we’ve been. The kindness of strangers is alive and well and flourishing! Our cup of gratitude runneth over!

The sun began to put in a brief appearance through the cloud and it even felt like it had warmed up a bit. Then…up ahead…we saw the sign. We were crossing into The Netherlands. Apart from our quick jaunt into Trieste in Italy, earlier this trip, The Netherlands will be our first extended time in a place we have already visited. Everywhere else, so far this time, has been new to us. The Netherlands we have been to before, back in 2015. Then, we had no intention of spending time there, it was simply a jumping off point after catching the ferry from England and we intended just riding straight down, out of the country. That was until we met Henk and Trui, two Dutch cyclists on the ferry on our way over and they told us of some places we should see and wrote down suggested routes for us. So we spent a bit of time in The Netherlands and saw some of the places they’d suggested. We’re so glad we did because we absolutely loved it! Since then, it has been known to us simply and fondly as “Nellie”. So, on this trip, a return to Nellie was a must. I had kept those notes that Henk wrote for us, with the names of places to visit, “just in case” and now here we are again! So the “just in case” did happen and now we can resume our Dutch adventure!

We pedalled on over the border, in a cycle lane on the road, then spotted a bench beside a pond to stop for lunch in Bad Nieuweschans. It was sheltered out of the wind, the sun began to shine and it actually felt warm. Thanks for that welcome! As soon as we pedalled off though, the rain came down again. We stopped, I put my coat on, pedalled off and the rain stopped. One of those days! As we rode along the path, a man was walking towards us and as we approached, he stopped and stood off the path out of the way of Steve, then I came along and he did the same for me. He stood on the grass verge and, with a smile, swept his arm along, in a gesture of “after you”.

“Dankjewel,” I said and he smiled. Considering we didn’t spend very long here last time, I have actually managed to remember a little Dutch and it was coming back to me. It seemed to stick in the brain a little easier than German and Danish!

We pedalled into our pitstop, settled in and then rode the nice, light, unloaded bikes back along the path to find some supplies. Along the way we stopped as a bridge was raised to allow a barge carrying scrap metal to pass through.

Then we were on our way, gathered some food and pedalled our way back, along with the multitude of locals, cycling leisurely along, as their regular mode of transport.

So here we are, in The Netherlands, back to visit Nellie. We have two weeks before we catch the ferry to England, so two weeks to explore and see what Dutch discoveries we can make. We had a great time in Germany though and we bid it a fond farewell. Here are some general impressions of that country, based on our experiences:

Thanks Germany, you’ve been great!

Time in the saddle: 2 hours 54 minutes

Weather: chilly, then rainy, then not, then warmish, still windy, 17C